The Halloween Creep of Rite-Aid!

My local Rite-Aid treats me like some kind of criminal.

Whenever I go in there to document their seasonal wares, I inevitably find myself crowded out of the aisle by no fewer than TWO workers. Ostensibly, they are there to neaten up the products on the shelves ... but they always seem to want to clean up the exact shelf I want to photograph, at the time.

Anyway, forgive me if this photo essay seems less-than complete, but that's because I was literally pushed out of the seasonal aisle by two workers rolling a large, heavy cart laden with empty boxes.

Though, maybe it's for the best? Rite-Aid never has anything that great, when it comes to Halloween 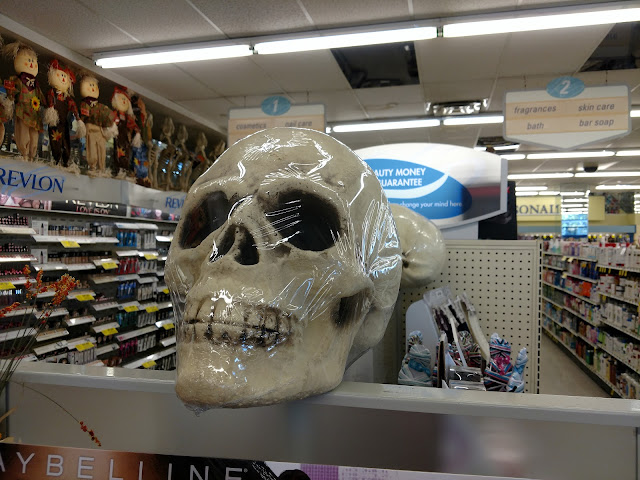 I wish I had put my own real skull next to this fake one to show scale, because you can't get a really good read on how big this thing is. For its size, it's surprisingly light, as it's made of foam -- just like a real skull.

I also don't want to know why it's "individually wrapped", like some kind of single-serve snack to put in a child's lunchbox. Lunchables: Lunch-a-skulls. 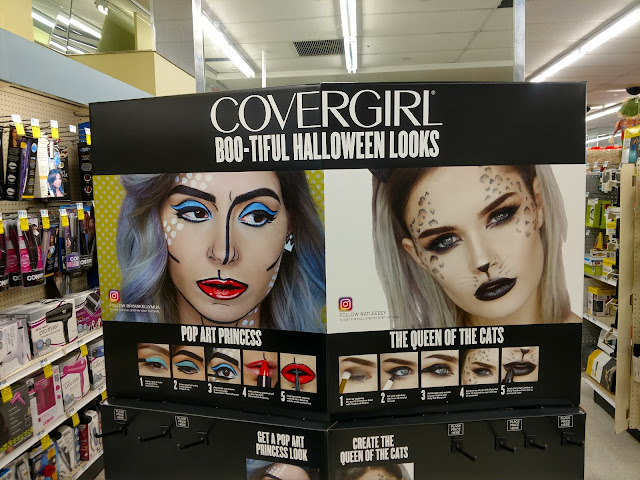 I took this picture because we'll all remember the limited edition Hostess Halloween Candy-Corn-Flavored Deep-Fried Pumpkin-Spice Snack Cakes ... but who will remember that Covergirl wanted to be your go-to face-goo for Halloween 2017? 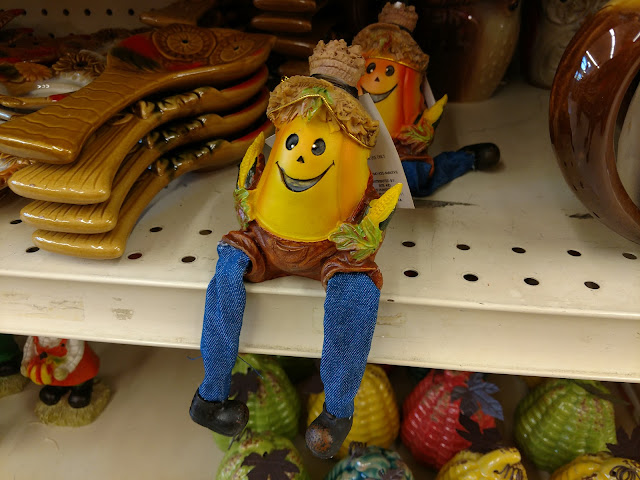 One day I would love to quit my job and write a book about the history of "leg-danglers" (or, as some call them, just "danglers" -- which sounds too risque for THIS blog!) I don't remember "danglers" being a thing, growing up. I first noticed them only a couple years ago, when my lovely wife and I bought one in CVS. Will their true history every be known? Will I be the one to tell it?!

Anyway, this Pumpkin-Man Leg-Dangler is brandishing two ears of corn, like knives. 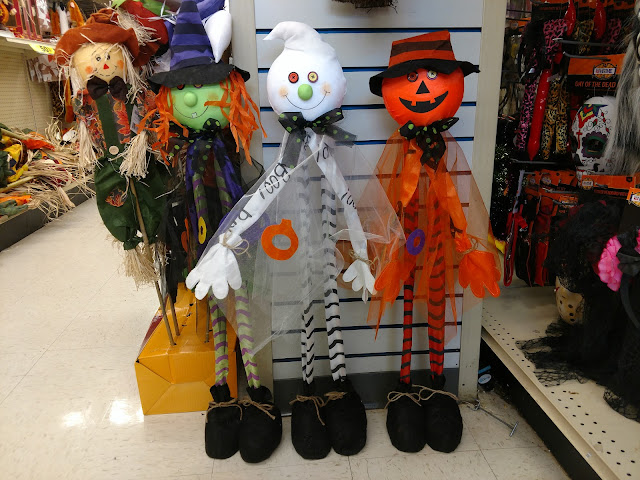 Read this bit in a film noir detective's voice:
The ghost dame floated into my office. She had legs that went all the way up. Literally. It was weird and gross. But, hey, a dame's a dame. I offered her a Maltese Falcon, but she said she's just quit. "We all gotta die of something" I said, before realizing my gaffe: that she's already a ghost. She responded with "Boo hoo hoo!" I couldn't tell if she was crying or trying to haunt me. "Listen, Dollface," I said, because her face literally looked like a doll's... etc. 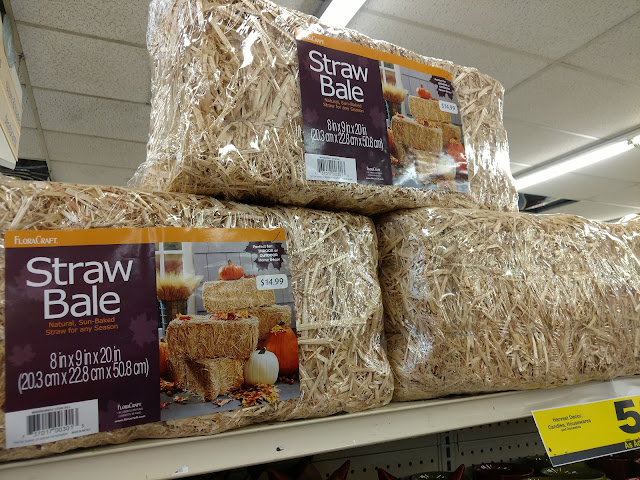 As I live in an apartment, my first thought upon seeing hay bales in a Rite-Aid is: Who buys these? I never consider that people would want to put them on their front stoop to make a welcoming, fall-type scene for visitors. 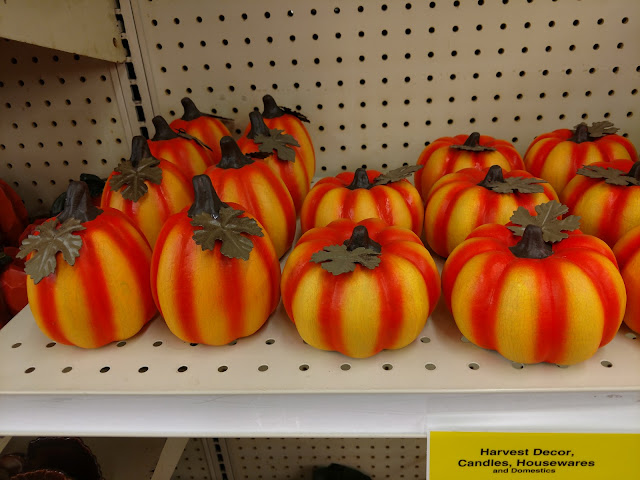 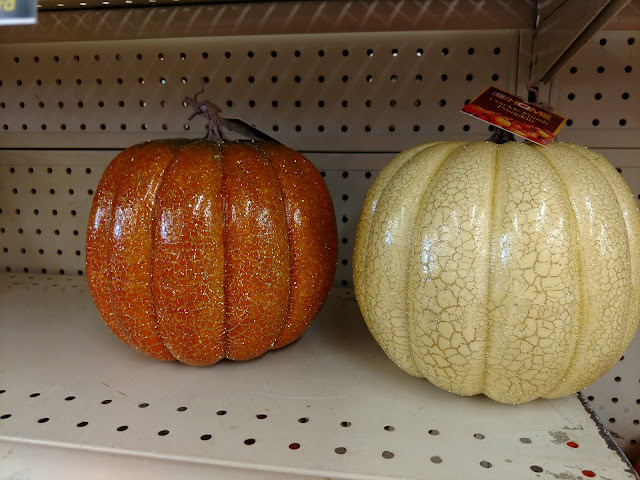 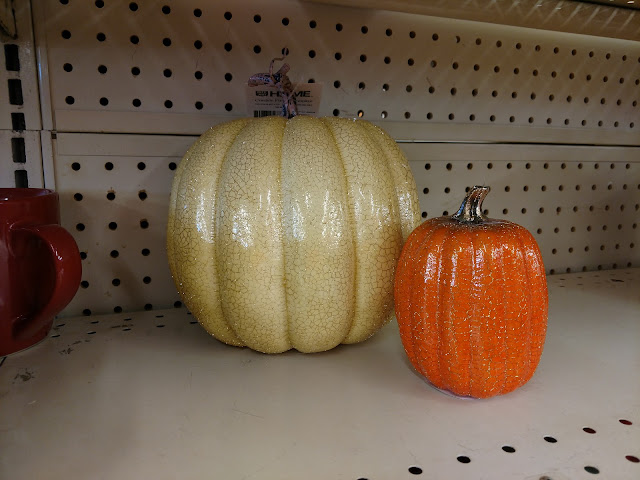 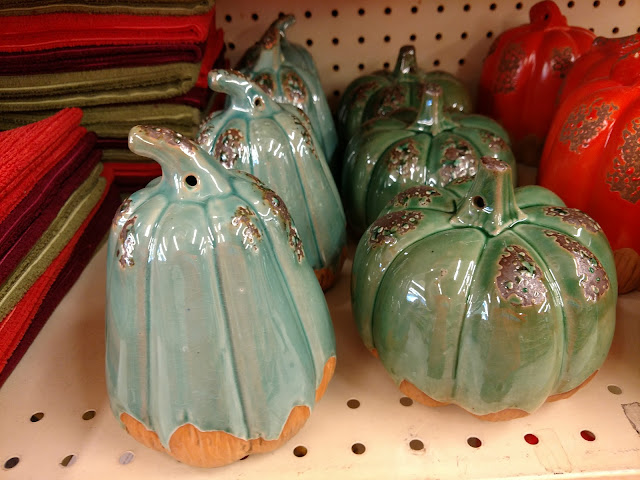 And none of them are really that great, are they?

I mean... look at this last set. Light blue and green are hardly standard pumpkin decoration colors, Rite-Aid. (Yeah, yeah, please no comments about those jarrahdale varietals, I know all about 'em!)

And what about the hole in the top? Am I meant to hang these somewhere? Am I supposed to buy hundreds of them and hang them over a bed, recreating that scene from "Se7En"?


Not pictured: Some geometrical, sharp-edged wooden pumpkins that were even weirder than the ones pictured here. I was run out of the aisle before I could snap a pic of that one. 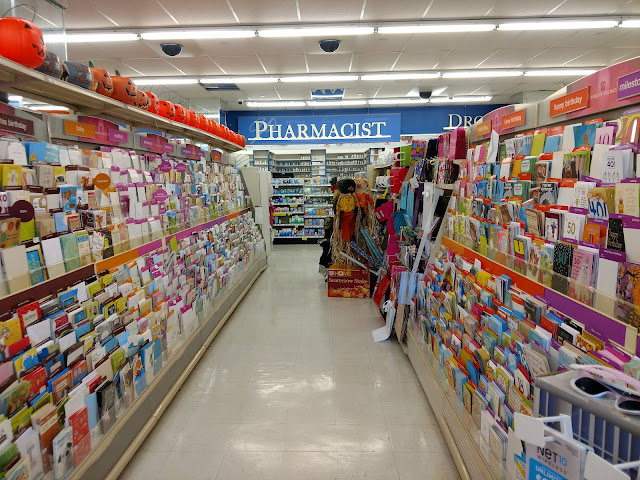 Ugh, and here's another employee, keeping tabs on me! 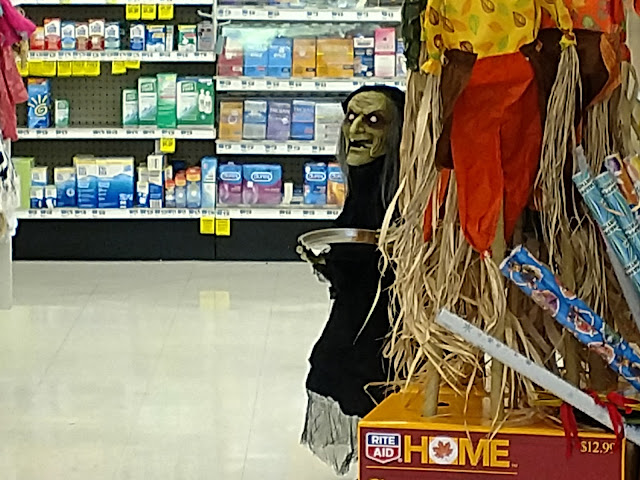 One last thing: Just in case you're not convinced that these Rite-Aid people have something against me -- that it's only an in my head -- dig this:

One time I was walking around the store chatting with my wife. An employee, her voice strained with worry and concern, directly addressed my wife with a sharp, "IS THIS GUY WITH YOU?" as if I was just some creeper, walking behind this lady, chattering at her.

To be fair, I was in my shabby, "going-to-Rite-Aid" clothes, probably hadn't shaved for, like, two weeks, and was walking a pace or two behind my wife at the time... but still!

Thanks for reading what this creep has to say!