I continue to document cheap, pharmacy-sold, holiday garbage in the hopes that this will lead to Internet fame and fortune. Or at least a modicum of attention from strangers.
* * *
Previously, I showed you the first Halloween items to arrive at CVS ... now it's Rite-Aid's turn.
* * *

As you'll see, Rite-Aid is a little more "dollar store" than they are "Grandin Road". (Would that sentence have been better if I'd said " 'Skid Row' than 'Grandin Road' "? ) I mean, just look at those peg boards! But I don't mean to shelf-shame Rite-Aid! There's a whole lot to love, here, if you can look past the ugg-o shelving units... and the fact that they keep bothering us to sign up for "Plenti", despite no clear value in doing so. But I digress. 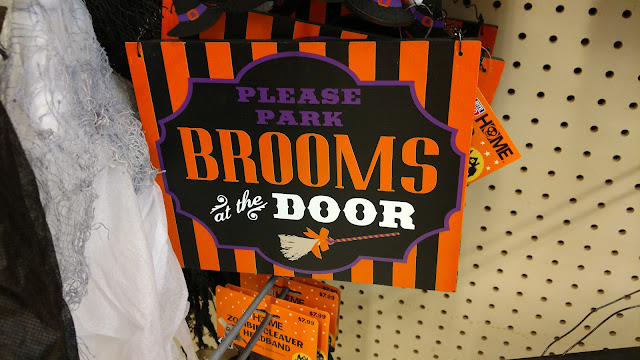 As you'll see, much of Rite-Aid's Halloween decoration is sign-based. Why sell a spooky witch, when you can sell a sign that talks about something a spooky witch might have to do? 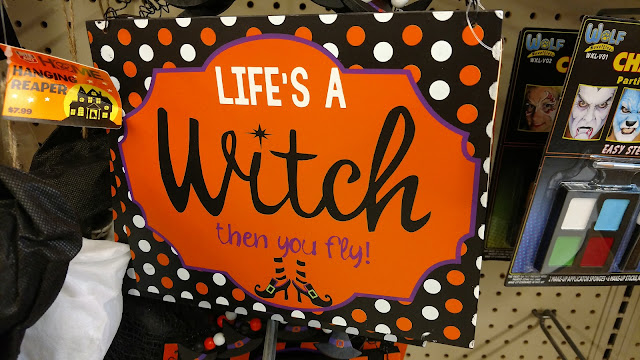 More signage! This one, I feel, is a bit misguided. At worst you're going to realize that your children already know the originating expression, when they find this sign just a bit too funny. At best, you don't have any children, so your family name dies with you.

Bonus: Draw your attention to the cheap makeup kit, off the side, there. How many of us bought those things, thinking we could recreate the sample looks on the package, only to wind up looking like Susan from the Sprockets Dating Game skit?! (Not me, I have always -- and will always -- hate wearing makeup... yet I'm OK with having a beard. Takes all kinds!) 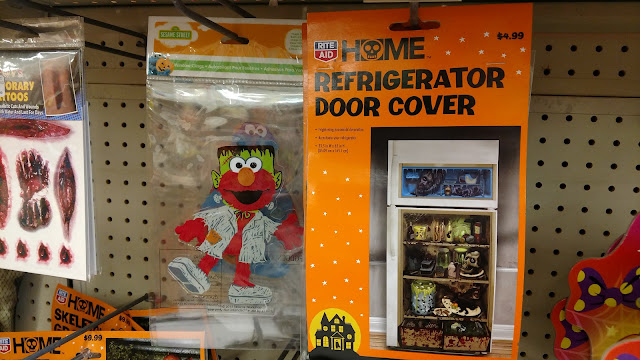 More signs! Though, technically "stickers? "Clings"? I don't know if you can zoom in on the image of the 'frige cover, but if you could, you'd see that there are brains in a crisper drawer. Which makes a lot of sense, because nothing I put in the crisper drawer stays crisp. Guess I should take a page from this Halloween decoration and not keep my veggies in there, either, but, instead, murder people! 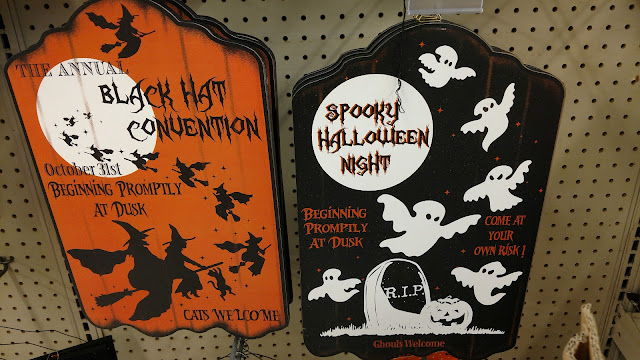 SIGNS!
BTW: "Black Hat Convention" is already a thing. It's a meeting of security experts and oh my god it's really a meeting of witches isn't it?! I've just blown the lid off of something. Expect me to mysteriously disap 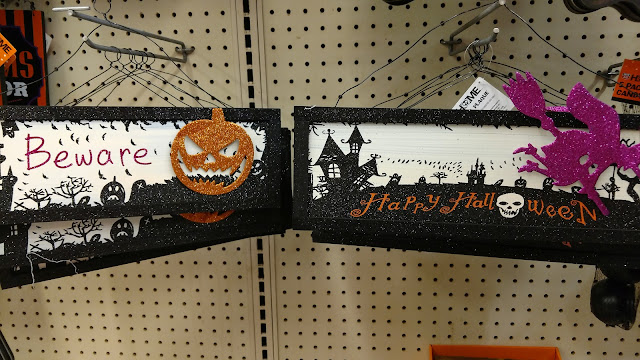 SIIIIIGNS!!!!
"Mayday mayday mayday. Uh this is uh Witch fifteen forty nine hit birds, we’ve lost thrust on both brooms we’re turning back towards LaGuardia. I’m not sure we can make any runway. Uh what’s over to our right anything in New Jersey maybe Teterboro?"

BONUS: Look very closely on the right of the witch sign and you'll see someone hanging themselves. 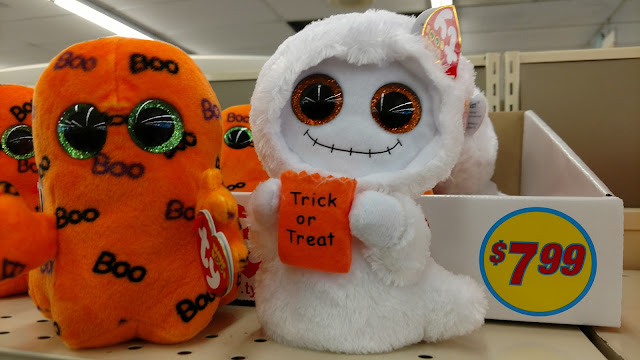 Pretty sure the one on the right did some acting in Labrynth. She's retired now; selling herself in Rite-Aid for $7.99. Hollywood is a meat grinder, people. 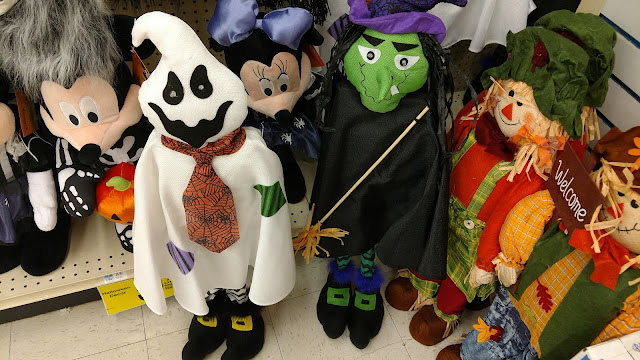 QUESTION TO PONDER: When we depict a ghost, is the sheet something the spirit is wearing, or is that "sheet" actually their skin? The answer could turn this adorable "raggedy ghost" with a second-hand sheet into a monster who repairs her own skin with swatches from an 80's interior decorator's sample book. 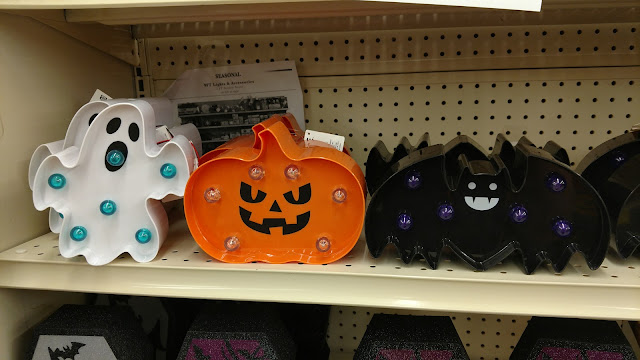 I love these bulb-signs (more signs?!) I want all three. Even the ghost swallowing / regurgitating a light bulb is cool by me, as it evokes Uncle Fester. I did NOT buy them, because my lovely wife was not with me and I like her to "ok" all my Halloween purchases, as I have questionable taste and I know it. Being self aware is awesome, you guys. 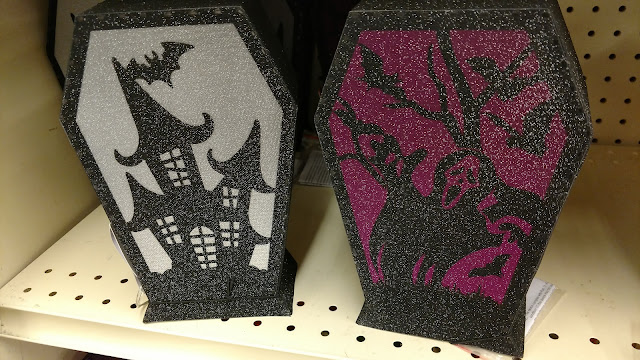 Despite it having a tissue paper and balsa wood feeling of whatever-the-opposite-of-"sturdy" is, I would have bought the one on the left (checking with my wife be damned!) had it not been illuminated with one of those cheap LED lights that randomly cycles through a rainbow of colors. Seriously. When has that type of bulb EVER enhanced a decoration?! Maybe during pride parades. Ok, I take it back, I want a pride haunted house. 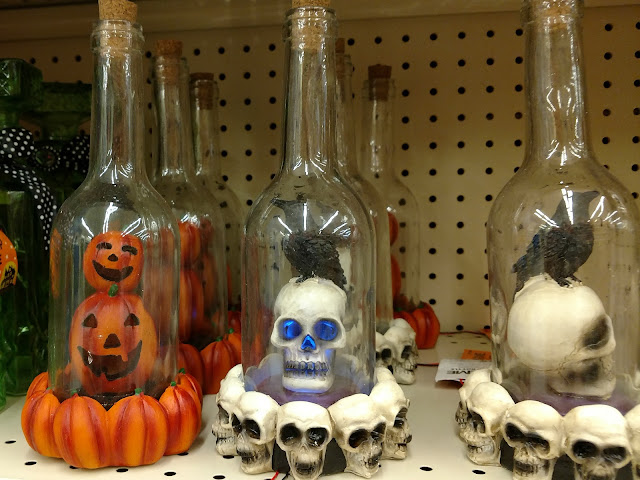 I don't really "get" what these bottles are supposed to be, and I don't like them. Are they a play on a "ship" in a bottle? More like @#$% in a bottle. Are they supposed to be mimicking / mocking those home decor magazines that tell you to spruce up your Halloween by putting things under a cloche, even though who the @#$% has a spare cloche just sitting around?! Cloche but no cigar. 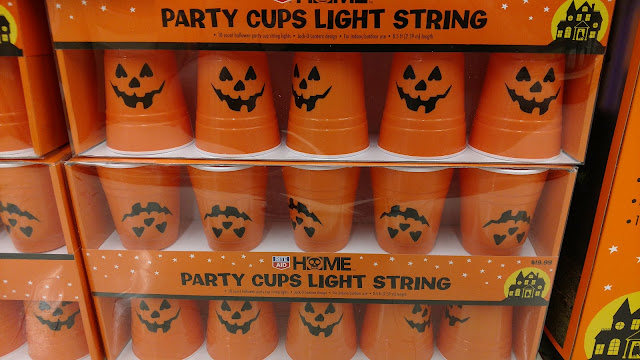 "We're taking a BATH on these "red Solo cup" light strings. Can we repaint them for other holidays?"

--Guy who just got himself a promotion.

That's it! You're free to go about your business...

Actually, hang on! Would you please tweet about this post, or share it on Facebook, or just email it to all your friends with the subject line: "Number 9 will melt your heart!" ? It would mean so much to my, a person who just wants attention probably because of something my parents did/didn't do when I was a child.

PS - I can be followed on Twitter @sommerjam
AND all through October, I'll be doing a series of 31 Halloween-themed stick figure drawings on Instagram @StickFigureHeros