A few days ago, my lovely wife and I walked past our local CVS. Outside was a giant CVS truck. My astute wife remarked, "I'll bet that's full of Halloween stuff!" WAS SHE RIGHT? OR IS THIS GOING TO BE THE SHORTEST BLOG POST EVER?!

To be sure, upon visiting the store yesterday, she was proven (mostly) right. Though there were Halloween items on the shelves, there was still plenty of Back-To-School stuff, too. So it's more of a transition time, not full-blown Halloween. An AMUSE-BOUCHE. (Editor's Note: I spelled amuse-bouche correctly, on y first attempt, so that's pretty cool, too!)

As CVS throws away more of their marble notebooks and fills in the vacated spaces with spooky do-dads, I'll do another one. Until then, enjoy this appeteaser: 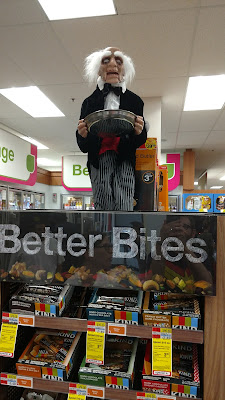 At the time I took this photo, I found the juxtaposition of the creepy butler tray table and "Better Bites" sign super hilarious. Looking at it now, it's barely slightly amusing.

Plus, I am reminded that "portrait" pictures make a blog look weird. I have not blogged in a while. Forgive me. 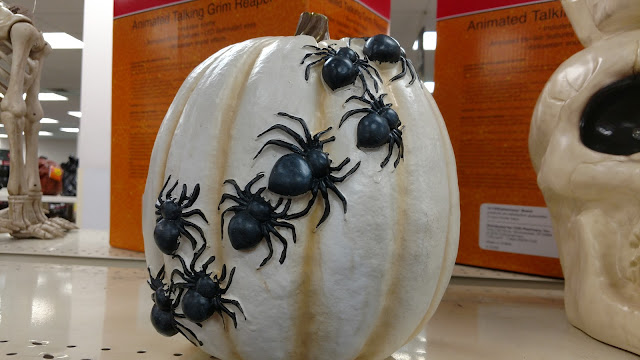 This thing doesn't light up, play music, or make spooky sounds. It does nothing but "exist". It reminds me of a few people I know. (Don't worry, I'm not talking about any of YOU.) 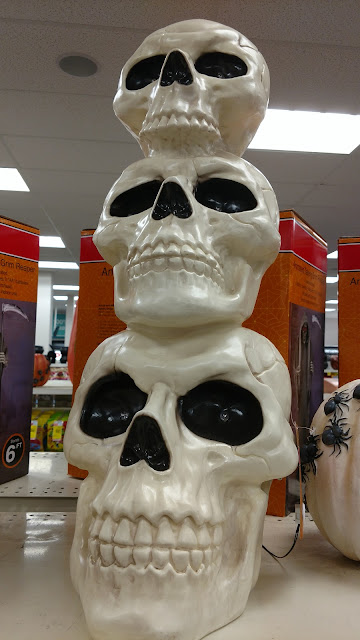 This one was supposed to light up - or something - because there was a "TRY ME" button hanging off it. Pushing the button yielded no results -- OR DID IT? If a creepy man delivers me a million bucks, I'll know that pushing that button actually caused someone I didn't know to be killed. There should've been a warning on the tag. 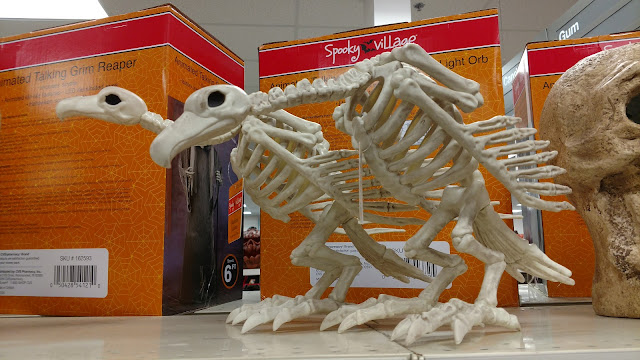 Plastic animal skeletons suggest that either A) you have killed an animal and are displaying its bones or B) the animal died (possibly not by your hand), but its bones are still somehow walking around. OR, I guess, C) that you have been blessed (cursed) with X-ray eyes, and you will, from now on, only see animals as skeletons. Imagine THAT world! 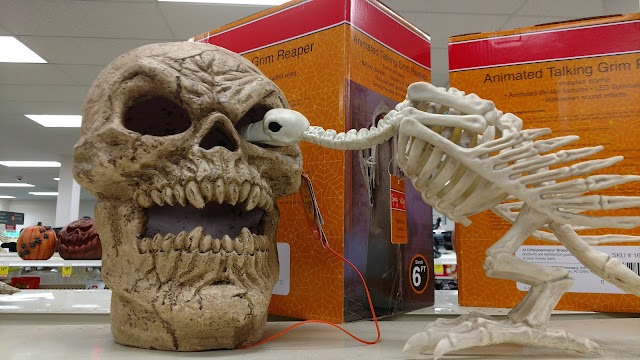 Some earlier Halloween fun-ster set up this tableau and my wife and I were delighted. Did the skeleton bird eat all the flesh from the demon skull? These are questions that so rarely get asked aloud.

Wow, so far, this blog piece has given you a LOT to ponder. I hope these questions help when you're meditating and doing your zen exercises. 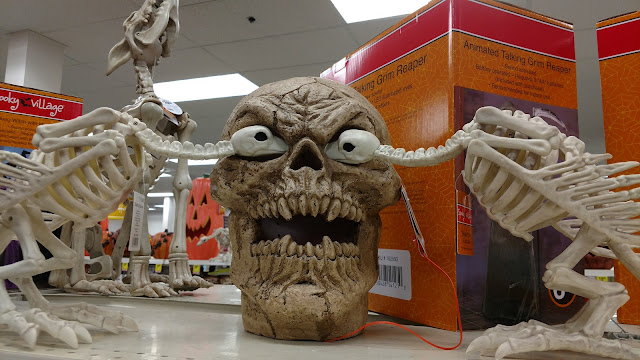 After seeing the above display, my wife and I decided to double down and put another bird into the mix. Now it looks like the demon skull has googley eyes. It could be argued that our interpretation is both better and worse than the original.

I hope the person who set up the initial tableau returns, sees our handiwork, smiles inwardly, then adds something new to it. In a perfect world, this back-and-forth would go on all season. In a realistic world, I'll have forgotten all about this challenge as soon as I hit "send" on this post. 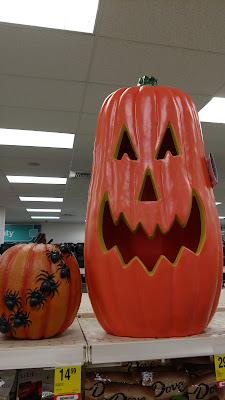 As much as I desire a giant, light-up pumpkin, I am faced with the reality of diminishing closet space. What if I bought a lamp shade and placed it over the top, so it looked like just an ordinary lamp during non-Halloween seasons? Though, it'd probably look less like a table lamp than it would a "Jack o'lantern who's had one too many at a New Years party and is doing a classic gag".

Do I want a drunk-looking pumpkin (drunkin) as decor? Some would say "yes" without batting an eye. My eyes are bats. (Now consider a world where eyes are bats.) 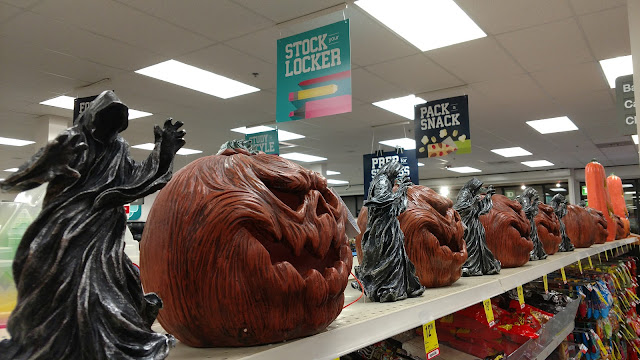 INT - SCHOOL
A CUTE GIRL looks over at AWKWARD TEEN.

Awkward Teen opens her locker, is immediately buried under an avalanche of plastic wraiths. 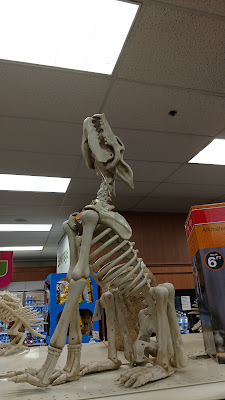 Touch this thing and the eyes light up and it goes "a-wooo". BUT ENOUGH ABOUT MY SEX LIFE!!! 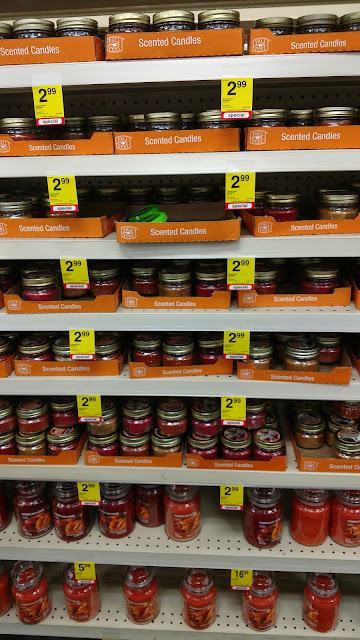 So many scented candles - or as I like call them: headaches in a jar!!! BUT ENOUGH ABOUT MY SEX LIFE!!!! 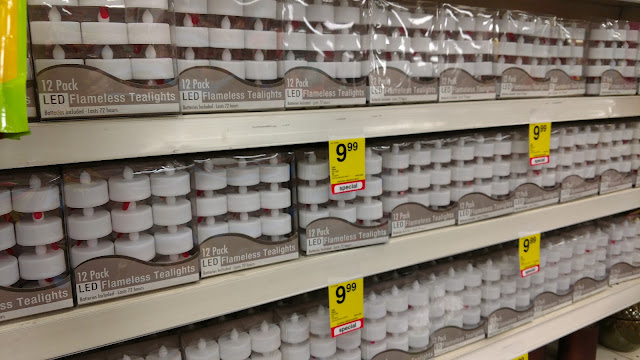 Let's pause to consider the "Halloween support materials" that usually get short shrift in these kinds of blog posts. Look at all a' them LED candles! Without 'em, so many people would burn down their Halloween Mood Tables. THANKS, LED CANDLES!!!

Has anyone ever bought new batteries for an LED candle? Or do we all just assume it's cheaper to buy a whole new candle? The answer to this question explains modern living in a way that no textbook can. 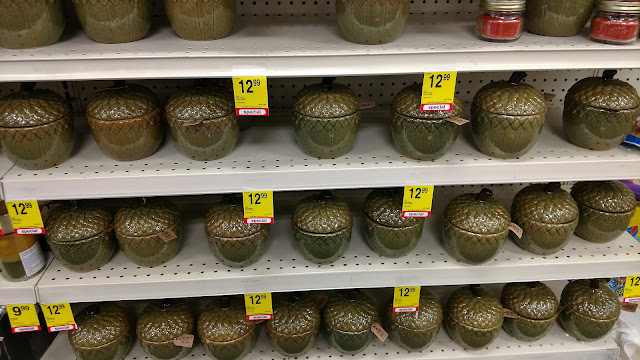 My lovely wife and I were excited to see an acorn dish. "TWELVE DOLLARS!" I exclaimed, a bit too loudly for a CVS store. I guess the high price is because you're paying for the dish to be filled with unwanted candle wax and a wick, too. Most people want the candle, though. Why must I be so contrarian? BUT ENOUGH ABOUT MY SEX LIFE!!! 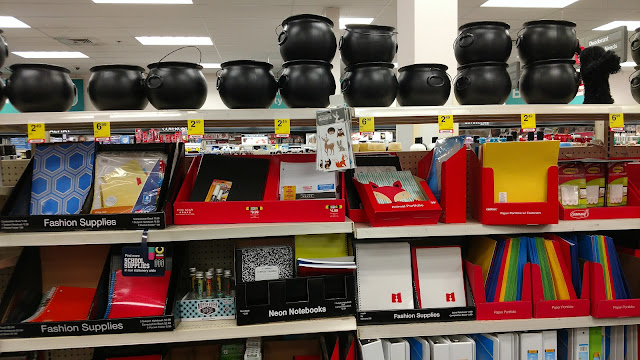 Remember when I said that there were still aisles of Back-To-School stuff and you totally didn't believe me? Guess THIS picture makes you feel pretty bad about yourself! Or do i just have a subconscious desire to always be right, and I'M the one who should feel bad? Like, all the time?

Golly, we've explored a LOT of emotions, today! Exhausting!
That's all for now! I hope your BOUCHE was AMUSE'd!