Well, 2015 is over! And whenever a year dies, that means that blogs make lists of things. I, however, did not plan ahead for this, so, as I threatened on Twitter, here's the only last-minute "best of" list I could think of:
The 10 best things currently sitting on my desk today, December 31, 2015! 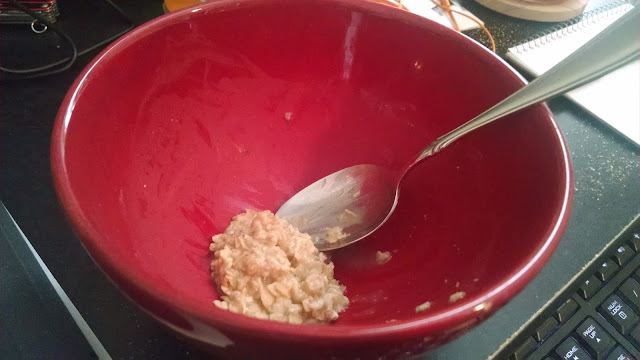 10 - ALMOST-EATEN OATMEAL
On first glance, you might be thinking, "Is that Quaker's cinnamon and spice?" On any other day you would be right! But on this, the final day of the year, it is McCann's Irish Oatmeal Maple and Brown Sugar. It's delicious. The only downside is that my local grocery store only carries the variety packs, which means I have to throw away 3 packets of gross, plain oatmeal out of every box I buy, just to get the flavor I like.

So far, this list is amazing, right?! And, check it: Quickly-cooling oatmeal (above) is only the TENTH best item on it! It gets SO much better... 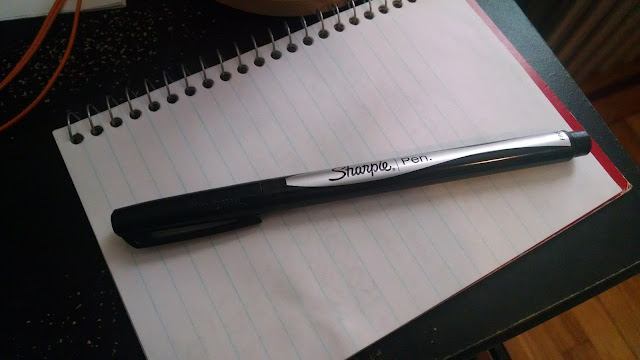 9 - SHARPIE PEN
There are two types of people in this world: Those who have a favorite type of pen and those who are looked upon with disgust by those of us who are pen-particular. Seriously, what do you mean "I just use any pen at hand?!" Have you no shame?!

The Sharpie pen has been my go-to stylus for several years, now - ever since my office started buying them, and I realized I could save money on pens by just using what they had in the supply cabinet. Five stars! (This is not a starred list.) 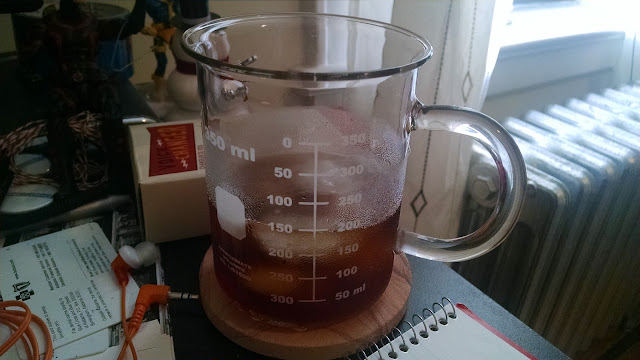 8 - EITHER THE BEAKER COFFEE MUG OR THE COFFEE IN IT
A present from a good friend of mine, many many years ago, I love this coffee mug so much. I use it every day. It's also one of those special mugs that you can drink coffee OR tea from. (Always pay extra for this feature.)

The coffee in it is pretty good, too. I get it from a place up the street that leaves their big bags of coffee beans out all day and night. I try not to think about the vermin that probably crawls all over it, after hours, or the unwashed hands that dip into it, when being scooped into bags by patrons entrusted with that task. Can't beat the price of $6.99 per pound, though! 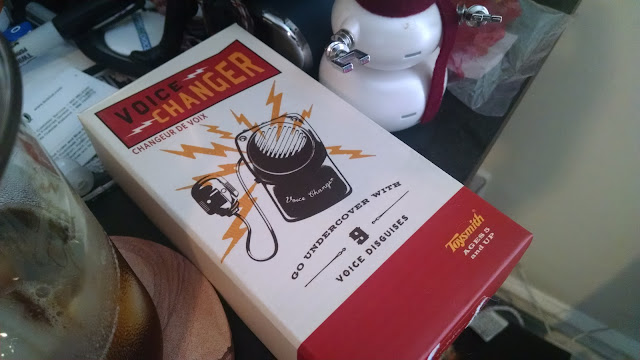 7 - VOICE CHANGER
One of this year's Xmas gifts to me, from my lovely wife (hey, does that make this one of those "Xmas Haul" lists?! This post is doing double-duty! That means I have to charge you double the fee, for reading it.) Anyway, this new acquisition has a setting that makes me sound just like Kylo Ren. I love intoning, "Where is the map?!" at my patient, but bewildered wife who has yet to see the movie. NO SPOILERS! 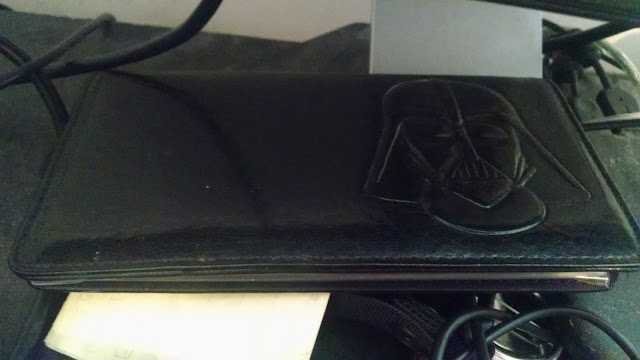 6 - DARTH VADER CHECKBOOK COVER
In college, my buddy Chris received a pair of these checkbook covers... either from opening a new account or for buying a car. I don't remember. Anyway, this was in, oh, 1998? That's long before having Star Wars stuff was cool. He offered his spare to me and I've been using it ever since. Has it really been 17 years?

These days, I write about 13 checks a year (12 for rent and one for my tax-prep guy), so he doesn't get much use. "I find your lack of check-writing blah blah blah." 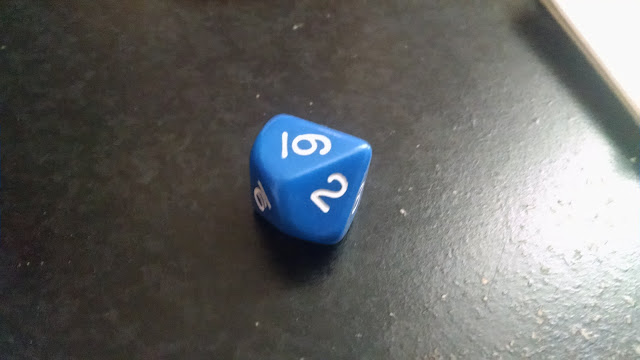 5 - TEN-SIDED DIE
I really like having a d10 on my desk, that's why it makes the list. (I get to call it a "d10", like a cool kid, because I grew up playing D&D, like a cool kid. A Cool kid who had to walk blocks out of his way to avoid being made fun of by actual cool kids!)

This die is also the thing I am most likely to be fidgeting with, while recording appearances on Nerd Lunch, Classic Film Jerks, or my own YOUR Weird podcasts. PLUGS! (Listen for it's appearance in any one of those shows when I accidentally drop it and it makes that classic "die rolling sound" that only a rolling die can make!)

PLEASE note my use of the singular "die" throughout this description. Incorrect usage of "dice" for the singular is one of my pet peeves. So much so, that I once found myself shouting "DIE! DIE!" into a phone at a stranger. But I'll share that story some other time. 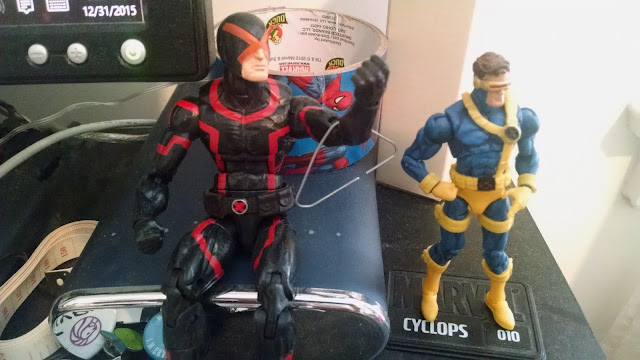 4 - CYCLOPSES
Most X-Fans hate him, but I love this guy. He's an uptight stickler for rules... JUST LIKE ME! Pictured here in his classic 90's over-the-top, belts-and-pockets look (right) and 2010's mutant freedom fighter look (left), they will soon be joined by a Funko Pop version. Which, I swear, will be the only Funko Pop I buy. (Outside of the one I already bought for my wife for Xmas - it's Ice King, if you must know.)

PS - The sharp-eyed among you will have noticed that the Scott Summers on the left has an unbent paper clip around his forearm. I am just as confused by this as you are. 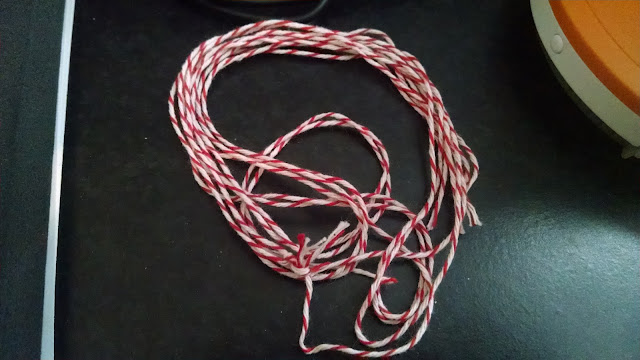 3 - BAKERY TWINE
I highly suggest that you all carefully cut the string off your next bakery cookie purchase and keep it handy. You'll find so many uses for it! Like... fancy string for new ornaments that you make out of Shrinky-Dinks. Or... leaving it on your desk in a jumble and forgetting about it, like I did. So many creative uses.

The only thing keeping me from throwing it out is that I just KNOW I'll need the very next day. (Because I'll receive a surprise shipment of ornaments that need hanging, STAT!) 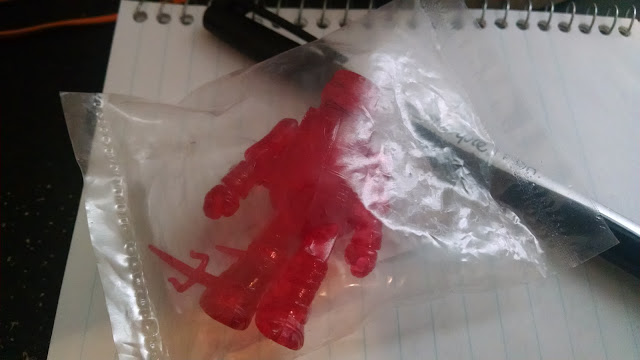 2 - NYCC TMNT EXCLUSIVE RAPHAEL MINIMATE
Taking pictures of things in plastic bags is the worst. It was so frustrating trying to get an image without glare that I almost took it out of its packaging. Good thing I decided to check eBay, first, because I can unload this, unopened, for about $20! That's a free $20 for me, simply for attending an event that I was going to go to anyway. Twenty sixteen is looking up, already! 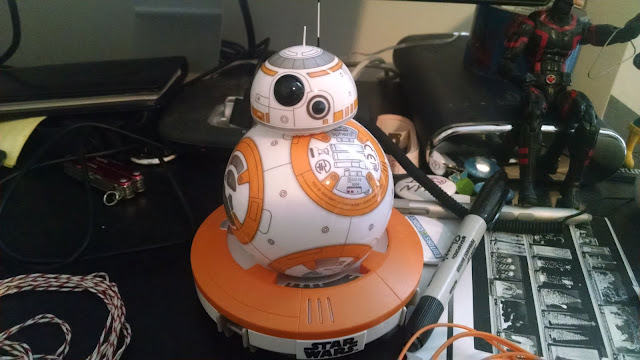 1 - BB-8
Ho. Lee. Crap, guys! This little doofus was an Xmas present to myself this year and I am not disappointed. He looks great as a display piece, and that would be enough, but then you connect him to your phone and he starts speeding across your floor, bashing into things at such a speed that he's probably going to dislodge something, internally, and will be broken, soon. No regrets.

TRIVIA: The "BB" in BB-8 stands for "Big Ball". Repeat this to all of your friends (especially those who read Wookiepedia or whatever, because they'll totally try to "ACTUALLY..." you with the real facts and you can giggle at them like a obnoxious troll.)


So, there you go, it's a hastily-written year-end list, just to say that I wrote one! It's the blog equivalent of Roger Corman's Little Shop Of Horrors: quickly and cheaply done, regardless of the horrible results.