Do I even need to introduce these posts, anymore? Like some superstar, being announced at an awards show, can I just say they "need no introduction"? In questioning the introduction, I have sneakily completed an introduction to this post. NOW SOME COMMENTARY ABOUT EASTER THINGS AVAILABLE AT CVS! 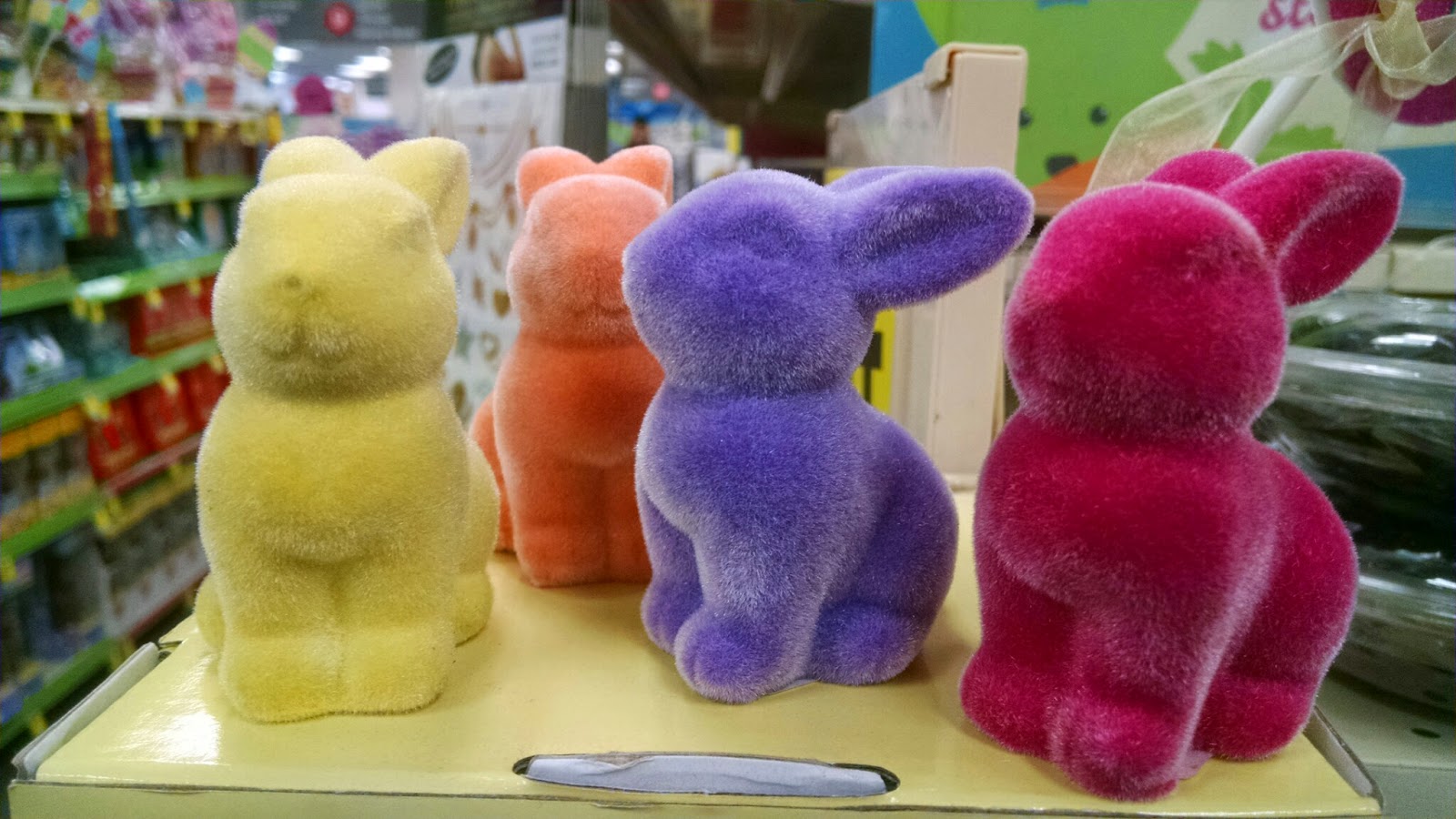 Like a Battle Cat action figure of old, these bunnies are "flocked". Flocking bunnies. You might want to rub their weirdly-not-fuzzy-fuzziness on your cheek, for the sheer sensation of it, but know that every runny-nosed child has already done so. This occurred to me too late. Too late.

What my picture doesn't convey is that they were very heavy. Like paperweight heavy. Which is what might keep them from being immediately thrown out, post-Easter: The fact that they can perform an actual job. (Even if they are competing for that job with literally every other semi-heavy object you already own, or can find in your yard.) But, also, who in 2015 is experiencing errant gusts of wind that'll blow away their manuscript? The digital age has eliminated yet another comedic trope. 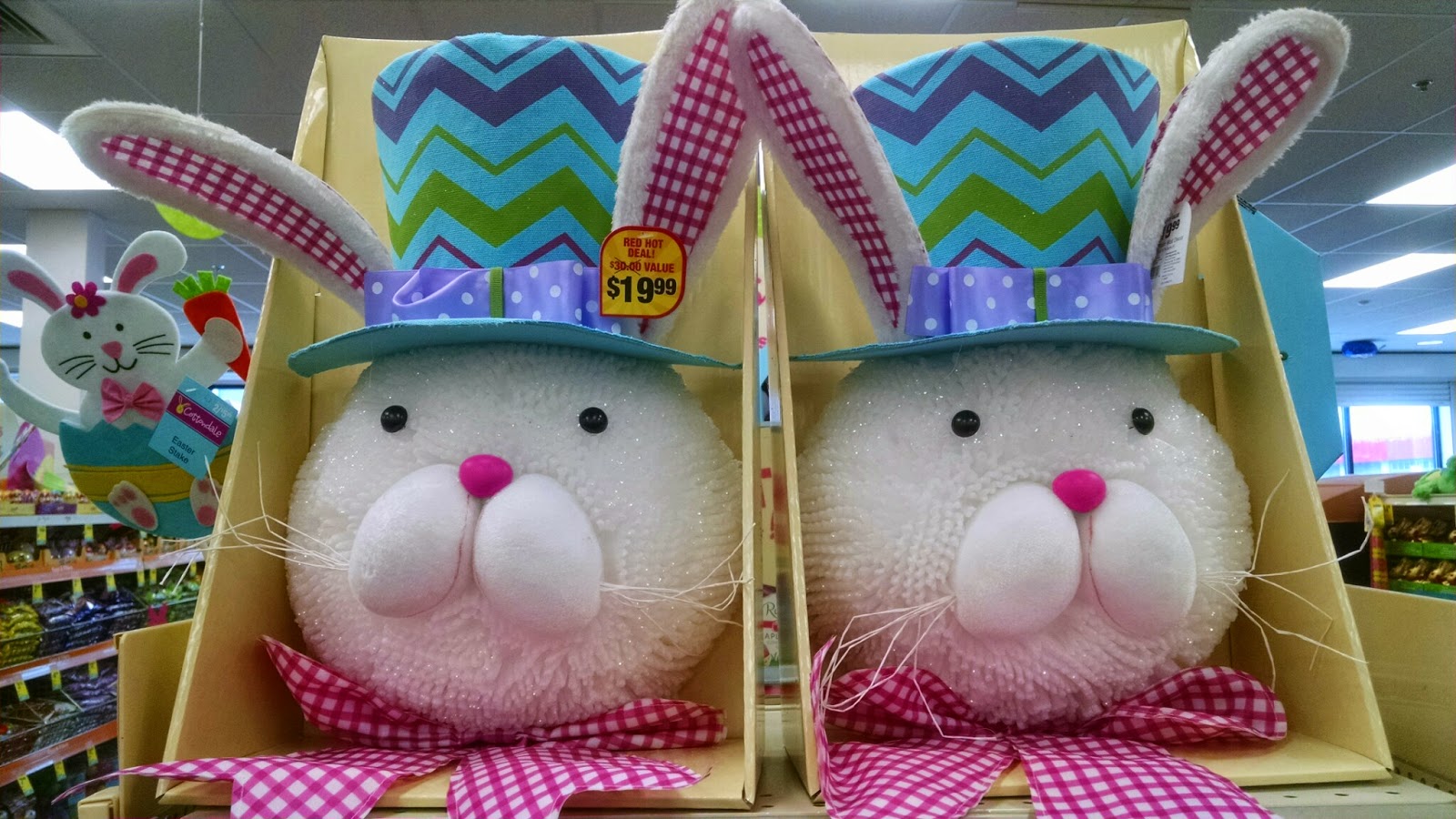 I have no idea what these things are supposed to be. A centerpiece? Something for your door? There was no indication on the packaging, so it's clear the manufacturers thought this thing's purpose was obvious. Yet it's not. Which is how a lot of us feel, as we go through life, right. So I guess it makes you think. 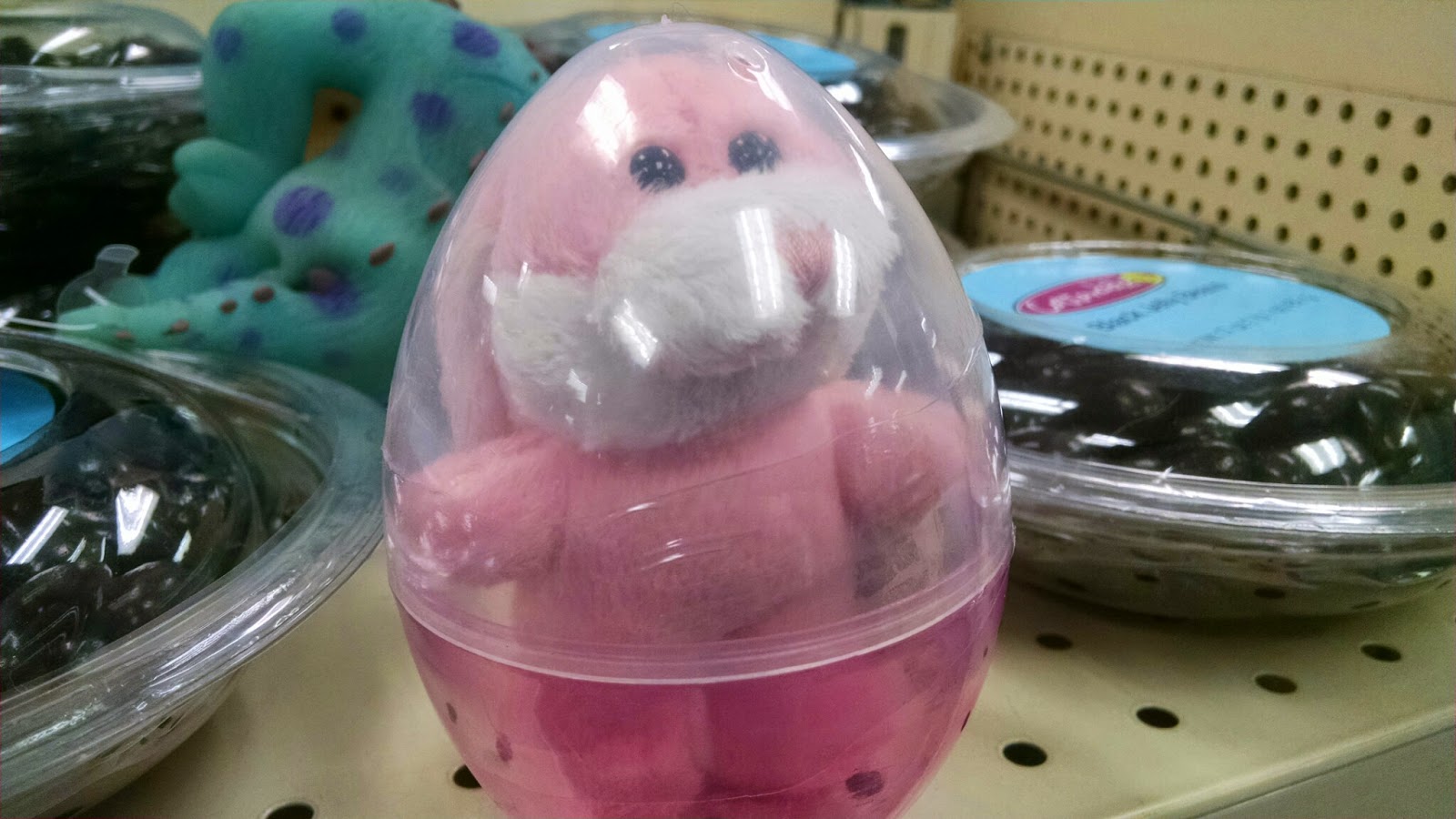 "Bunny from Ork" was how I described this guy, on Instagram. (Follow me, I'm @Sommerjam!) Now, I only posted this on Instagram, because I didn't know if I was going to get around to writing this post. Ugh. That's too much back-story and revelation about insecurity / lack of time. You guys don't care! No one wants to know how the sausage is made, you just want to slice it and put it on a pizza, along with several other types of meat, and call it a "meat lovers".

I'll admit, I felt a gut-level sympathy for this bunny. There's something inherently sad-looking about it. I now understand animal rights a bit more. Correct destination, took the wrong road to get there. 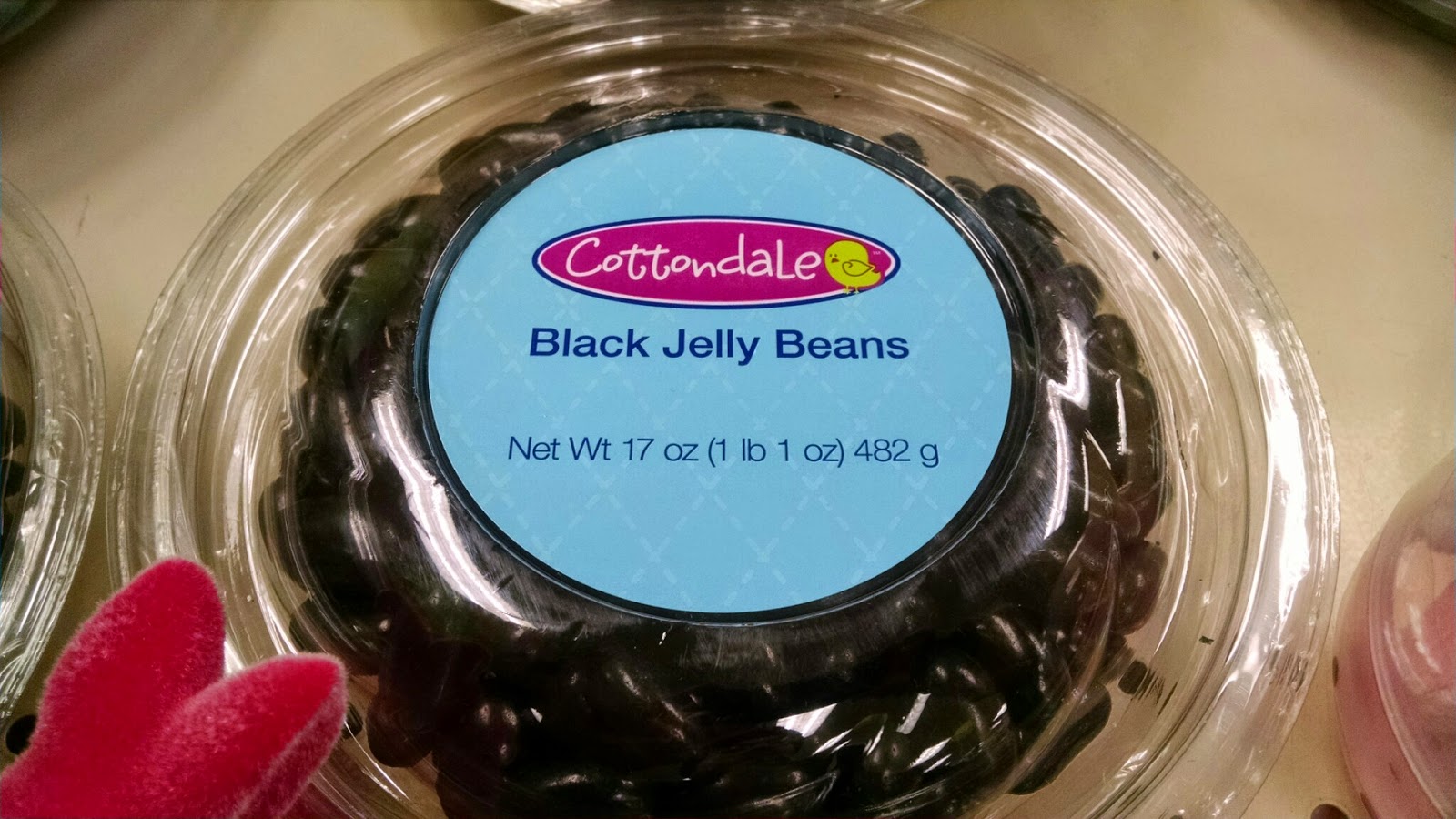 Taxi Cab Confession: I love black jelly beans. However, I just read, somewhere, that they contain a chemical that causes an irregular heartbeat and other medical problems. Some little kid was hospitalized from eating them! Naturally, I got this shocking info from reading just the headline of the story... upon closer scrutiny, the kid in question was eating a handful of them, every day, for five years, or something. So there's a lesson, here: Stop eating handfuls of (the best) jelly beans... somewhere around the 54-month mark. I am not a licensed physician. 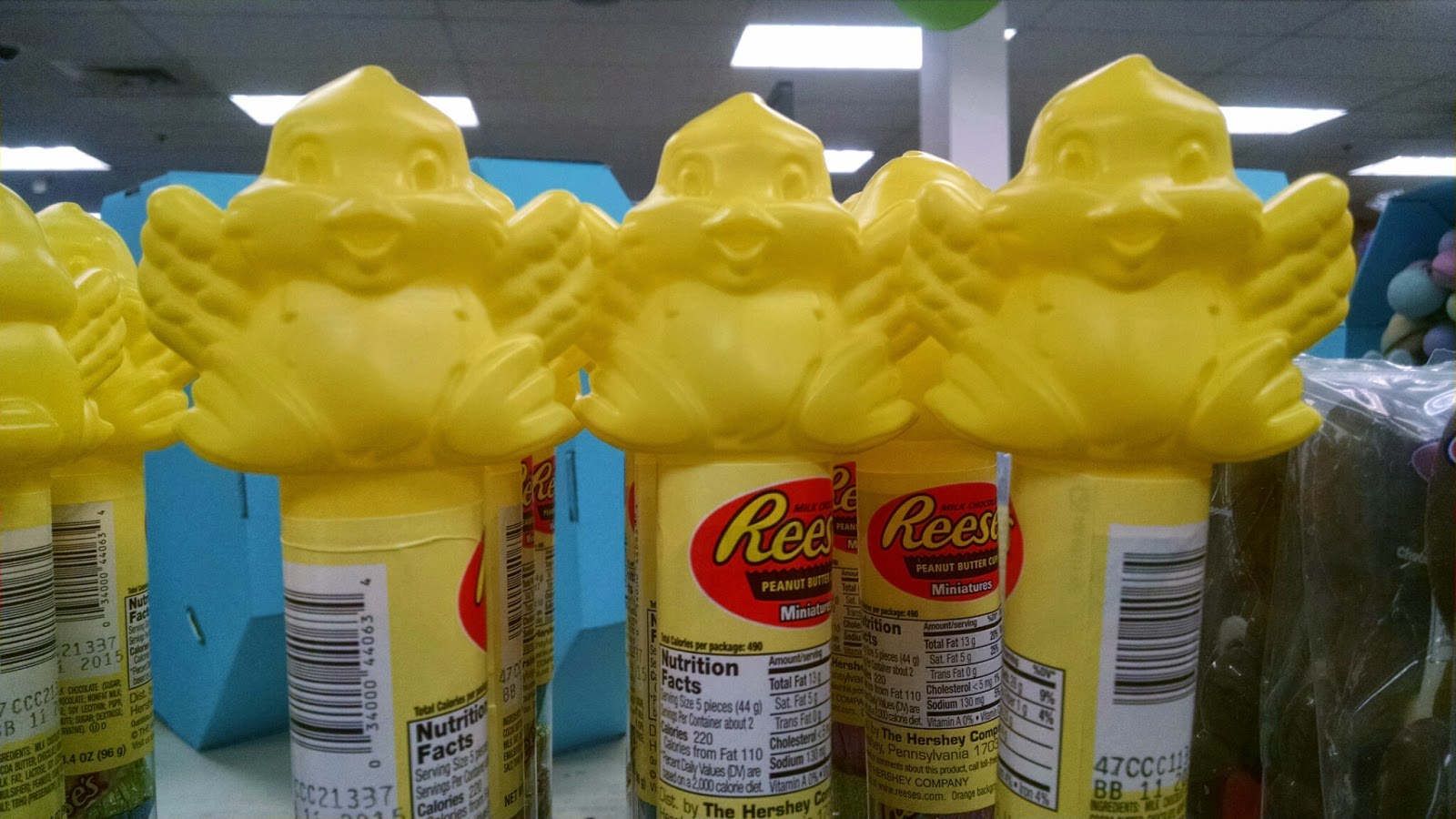 You can just imagine it saying "I WUV OO DIS MUCH!", right? (Then it poops out another Reese's Mini Peanut Butter Cup into the tube it's sitting on. Uh, where did you think peanut butter cups came from?) 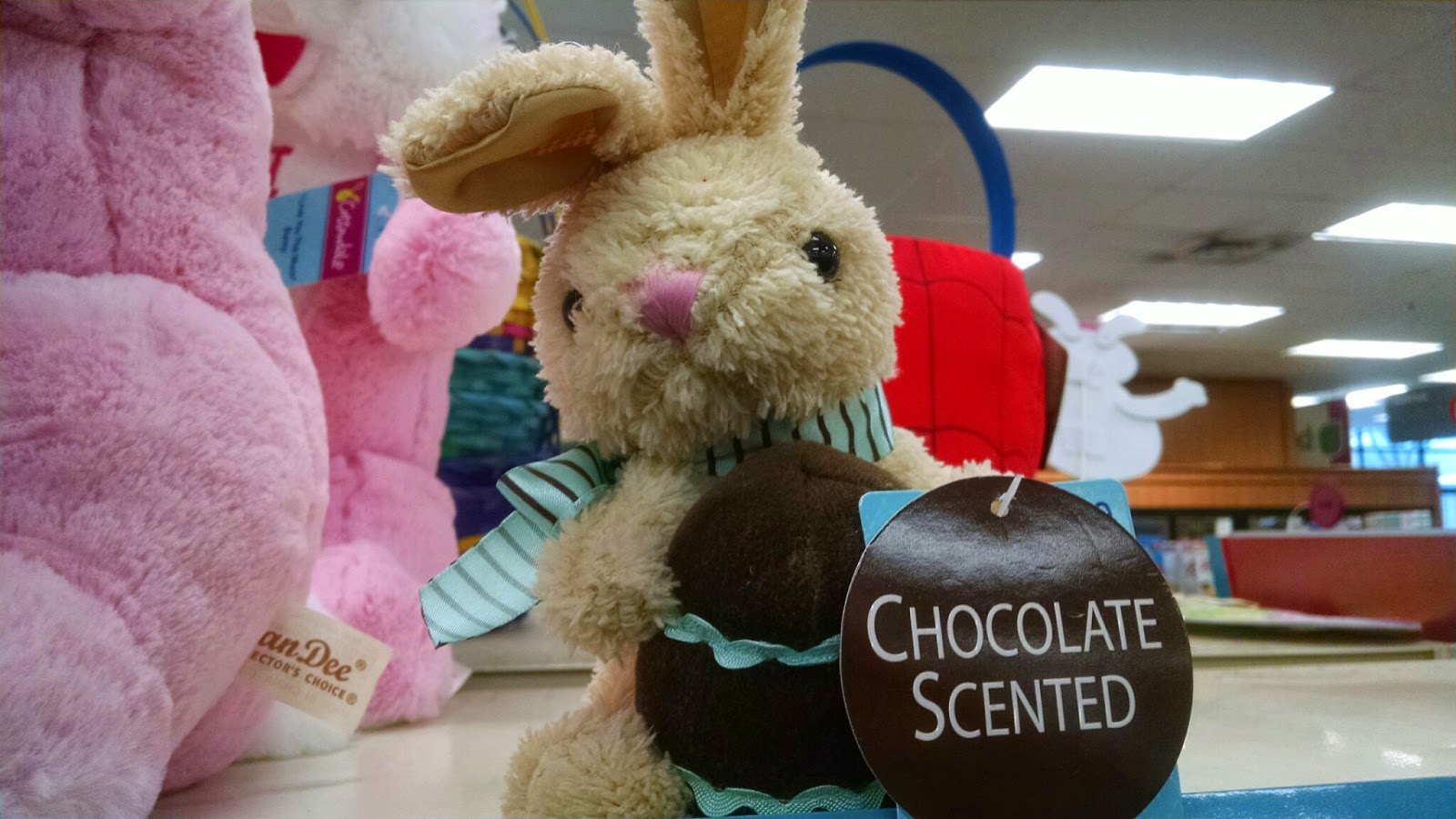 Your child will be delighted to wake up and find a rat gnawing on her new food-scented stuffed animal! Seriously, how can you make a toy smell like food and not have it attract vermin? It really did smell like chocolate, too. Dirty chocolate. Like the kind you find on your pants, the day after Easter. 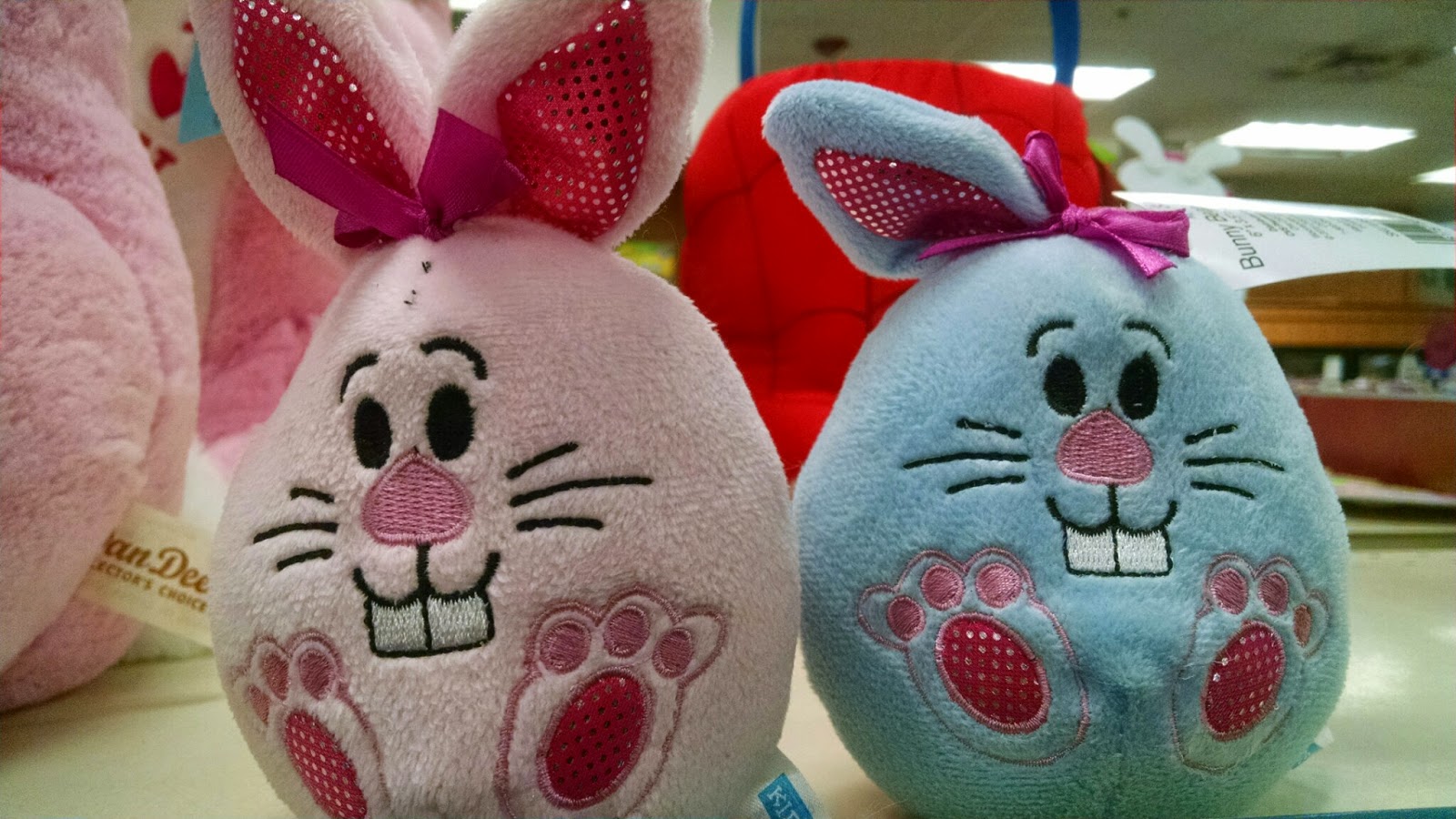 I have nothing to say about these. They are perfect in every way. Five stars. 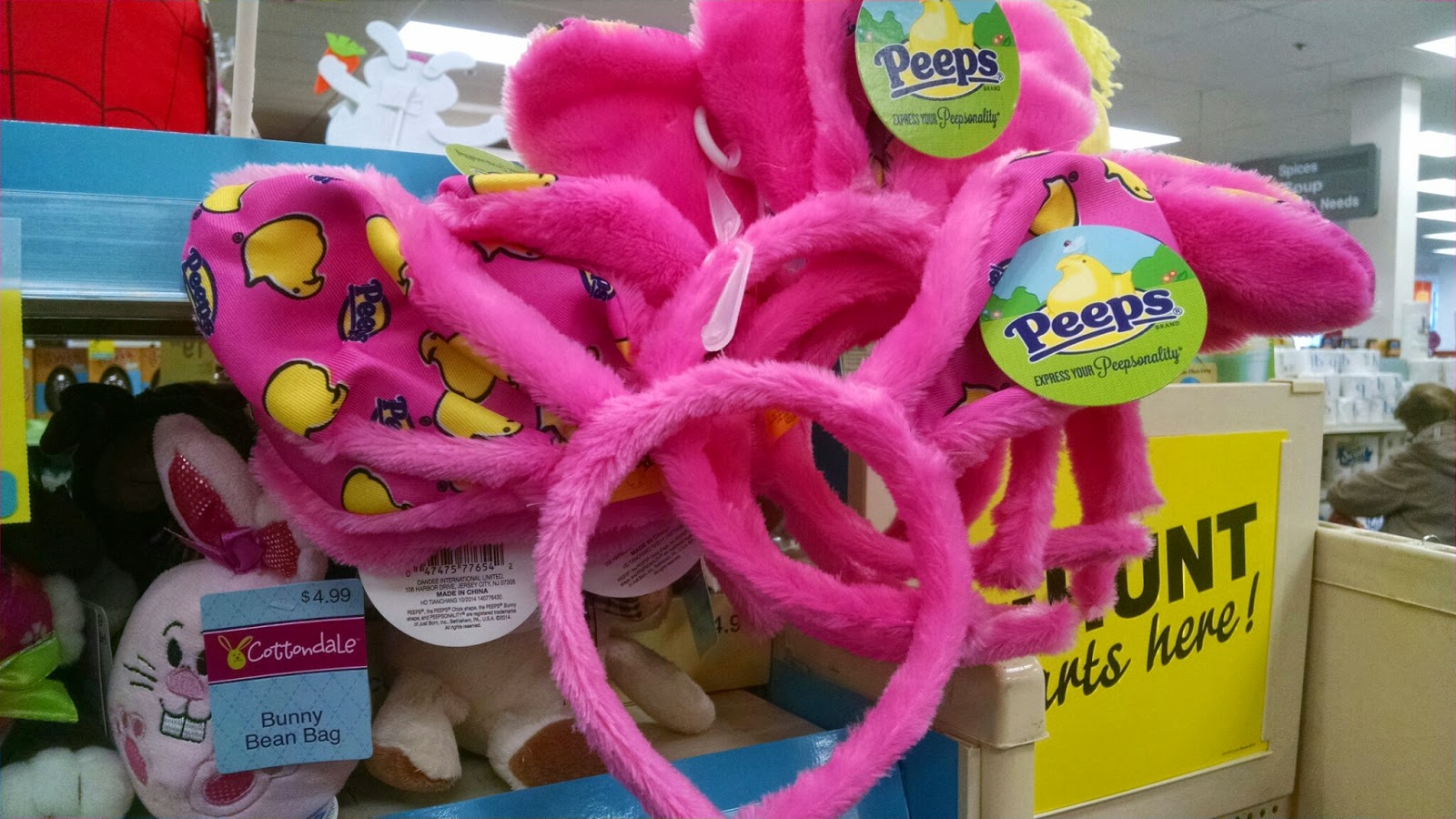 Peeps has really diversified, this year. Peeps-branded merch was all over the damn place and so little of it made any sense. Why fuzzy pink ears, lined with Peeps fabric? And if you just objectively look at the shape of them, they don't even look like rabbit ears... they're just ears! "Approve it all!" shouts the Peeps marketer, "We need MINDSHARE!" 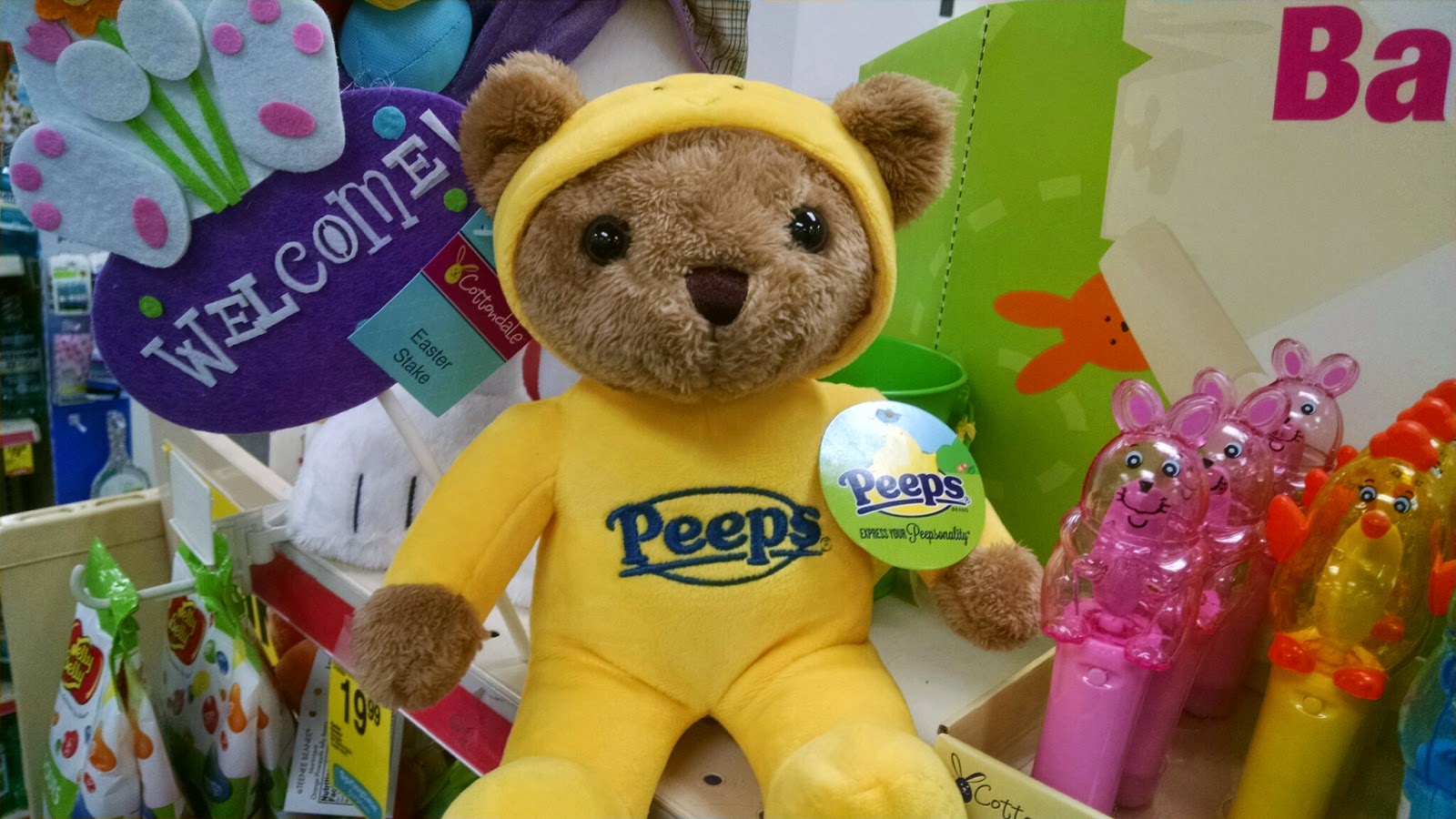 Somewhere out there, a grade school kid's CCD (religion class) essay about "What Easter Means To Me" is a page and a half of double-spaced ramblings about this thing. 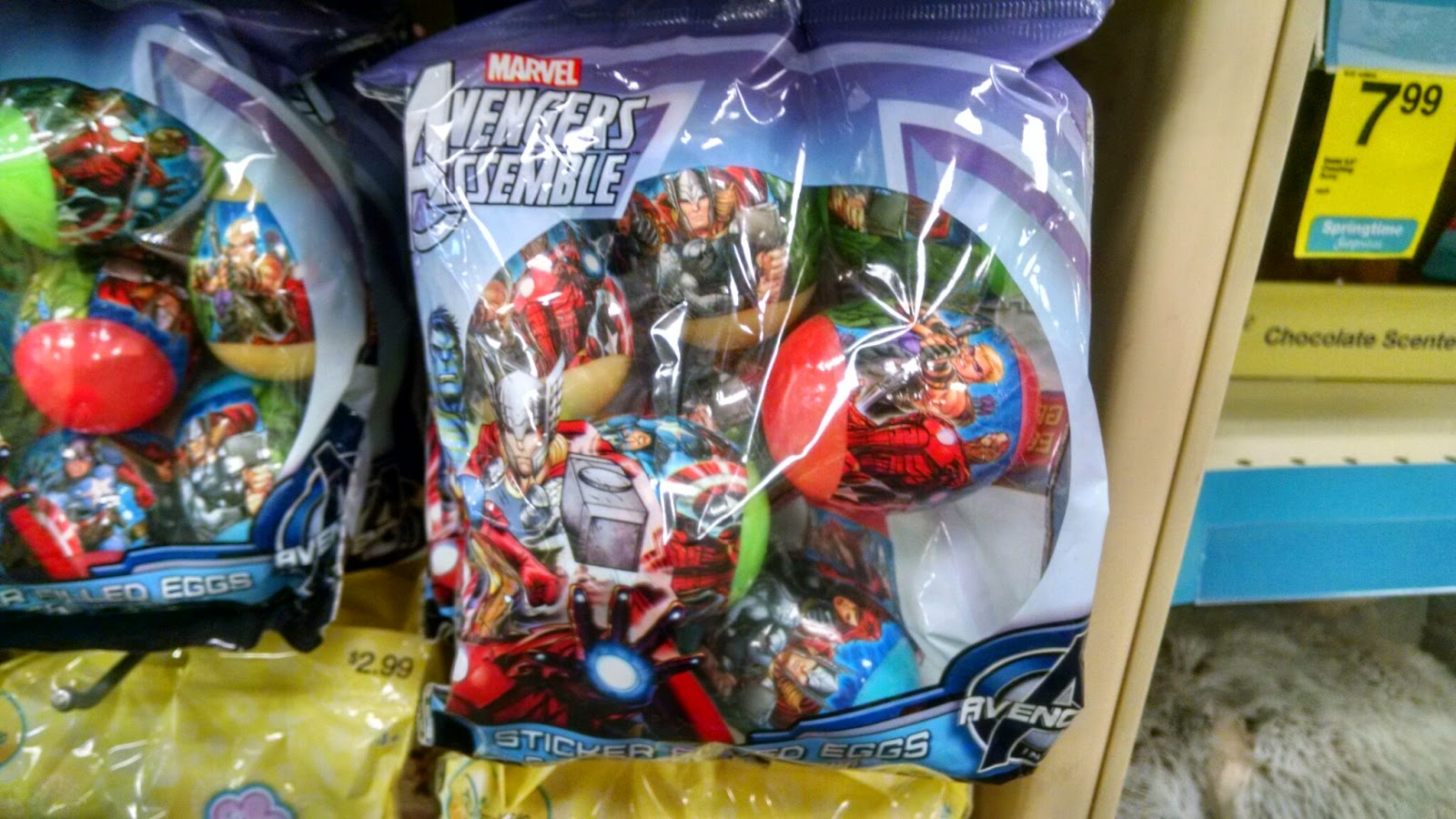 Marvel and their Avengers were approaching Peeps-like levels of saturation of the Easter aisle. You know how everyone's worried that, one day, there's only going to be one giant company called GoogleZon? What we should be worried about is that Disney and their properties are taking over CVS aisles, during the holidays. "Those willing to give up CVS aisles for Disney-brand items deserve neither!" Jefferson said that. (George Jefferson, in my fanfic titled "The Jeffersons Meet The Easter Bunny... In Space" - which was also the working title of Age of Ultron.)

Anyway, I guess these are plastic eggs, wrapped in plastic Avengers wrappers, full of Avengers stickers. These are way better than real eggs, because these eggs will never biodegrade and will be around for your children's children's children to find in the blow-hole of the last dead humpbacked whale. Also: No cholesterol. 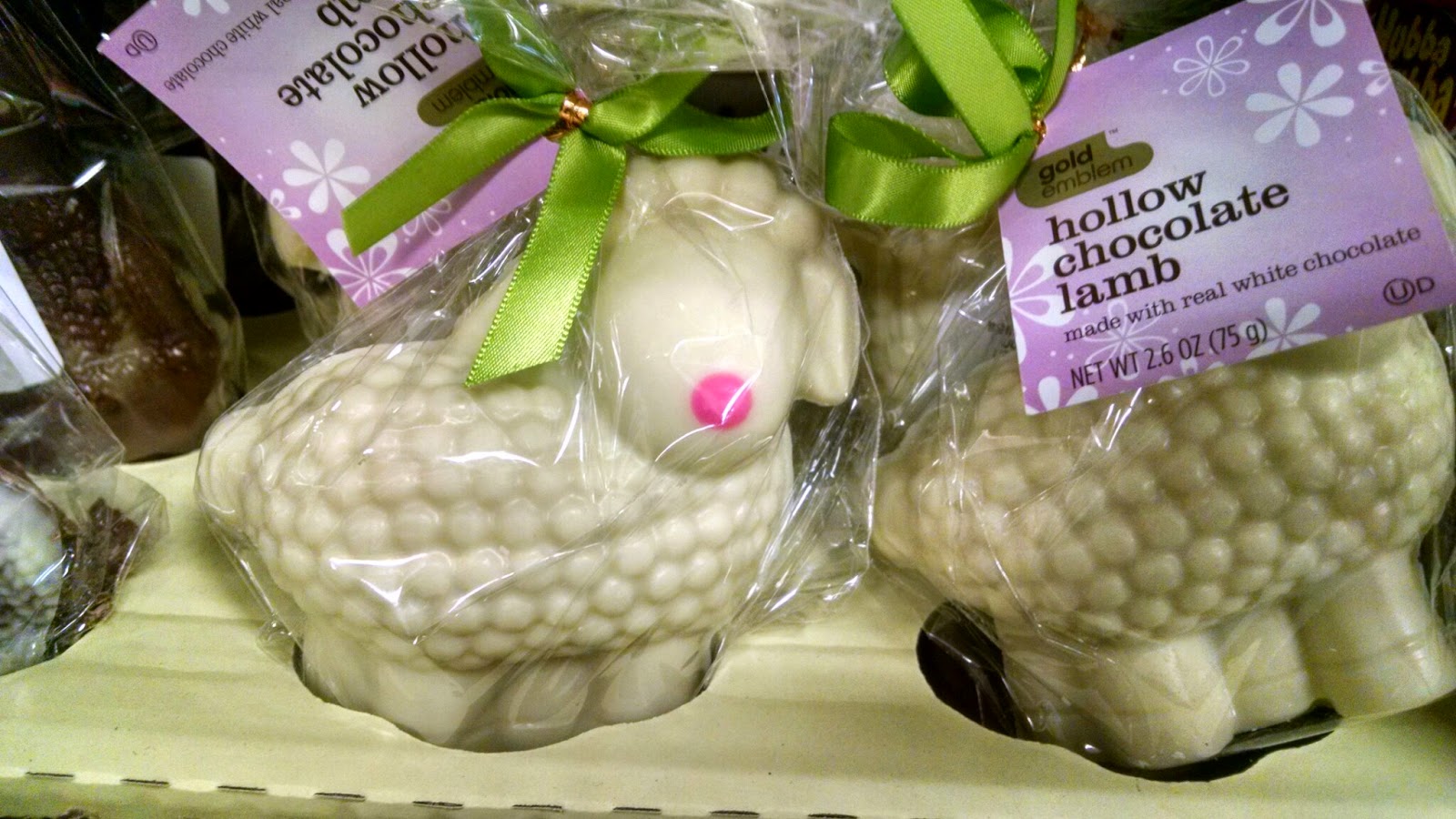 As hollow as the sentiment of whatever relative bought you WHITE CHOCOLATE for Easter. Ugh. 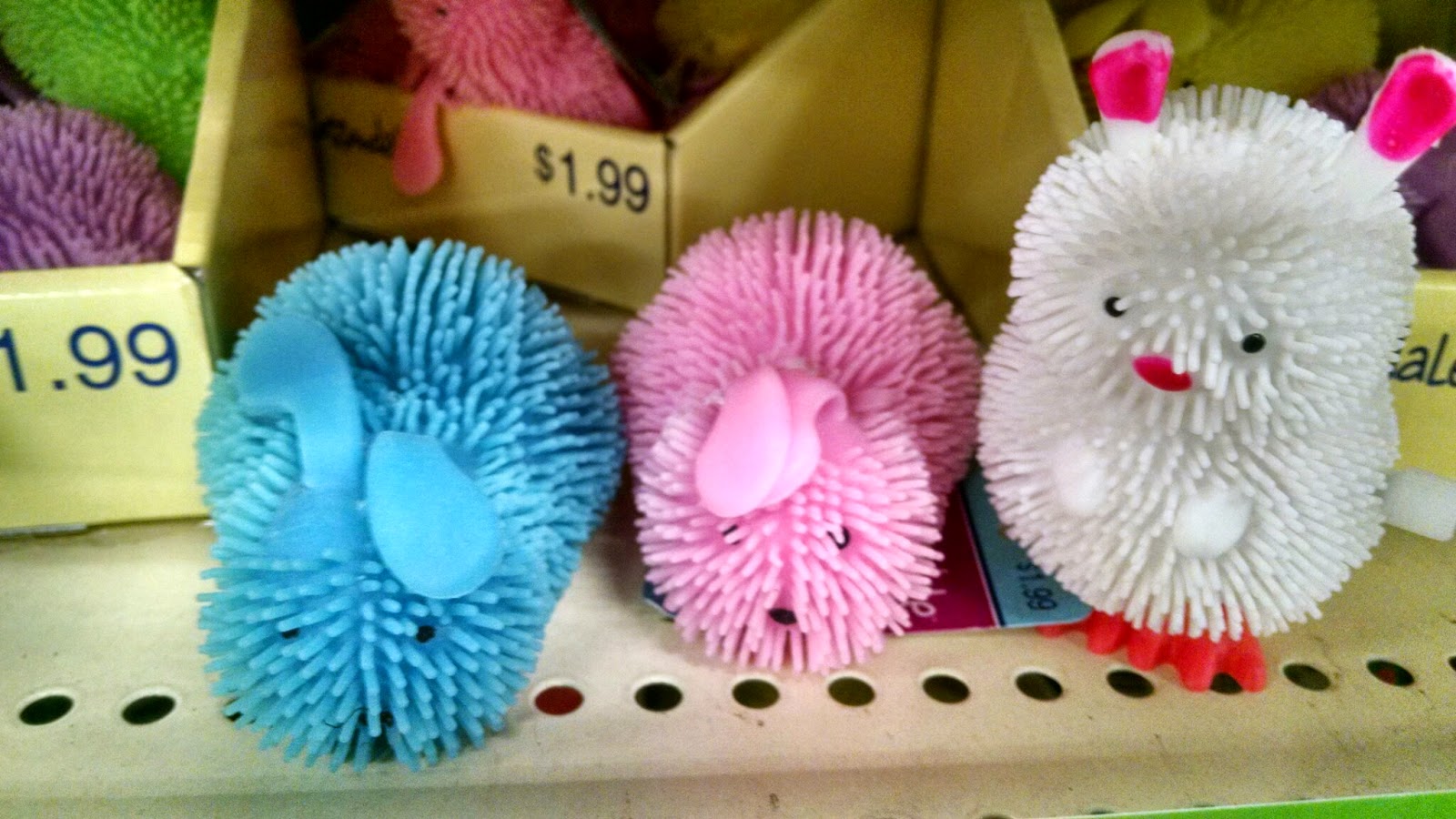 Bounce them and an internal strobe goes off. Squeeze them and their "skin" gets super thin and bubbles out. Nothing about these is anatomically accurate to real rabbits. The one on the far right has boobs.


Ok, now go buy some of this stuff at CVS! (I am not paid to say that; however, I'd be a fool to turn down sweet, sweet CVS money, if it was offered. Heck, they could pay me in black jelly beans, really... until my heart gives out after five years.)

I can be followed on Twitter @sommerjam.
ALSO! I have a new podcast! It's called Your Weird and it celebrates people's weird quirks. It's funny. SUBSCRIBE NOW!