Working in the deal hunting game, as I do, I know a terrible deal when I see one. Unfortunately, that doesn't stop me from being suckered in. And that's why I found myself buying six different kinds of Bath & Body Works scented soaps.

It's weird. Neither I nor my wife like scented soaps very much. We're what you call "sensitive" and "allergic" and "annoyed by certain smells". Yet, again, we ordered six. Scented. Soaps. My thought was "Ooh, this'll be a festive way to celebrate the holidays!" Because smelling pumpkin spice, right after you poop is "festive". Sorry if that was gross.

The method to my madness was that I could buy a progression of scents. A "playlist", as it were of smelly soap that would tell a story. The story of the holidays, from October through the new year. Admittedly, it's not a GOOD story. In fact, it STINKS! BOOM! (I'll assumed you highfived the screen? Good.)

So now, after much ado, but with no further ado, here's what I bought, because there was ostensibly a "sale" on them and I wanted my hands to smell like food, so I could have an excuse to lick them and not seem weird. 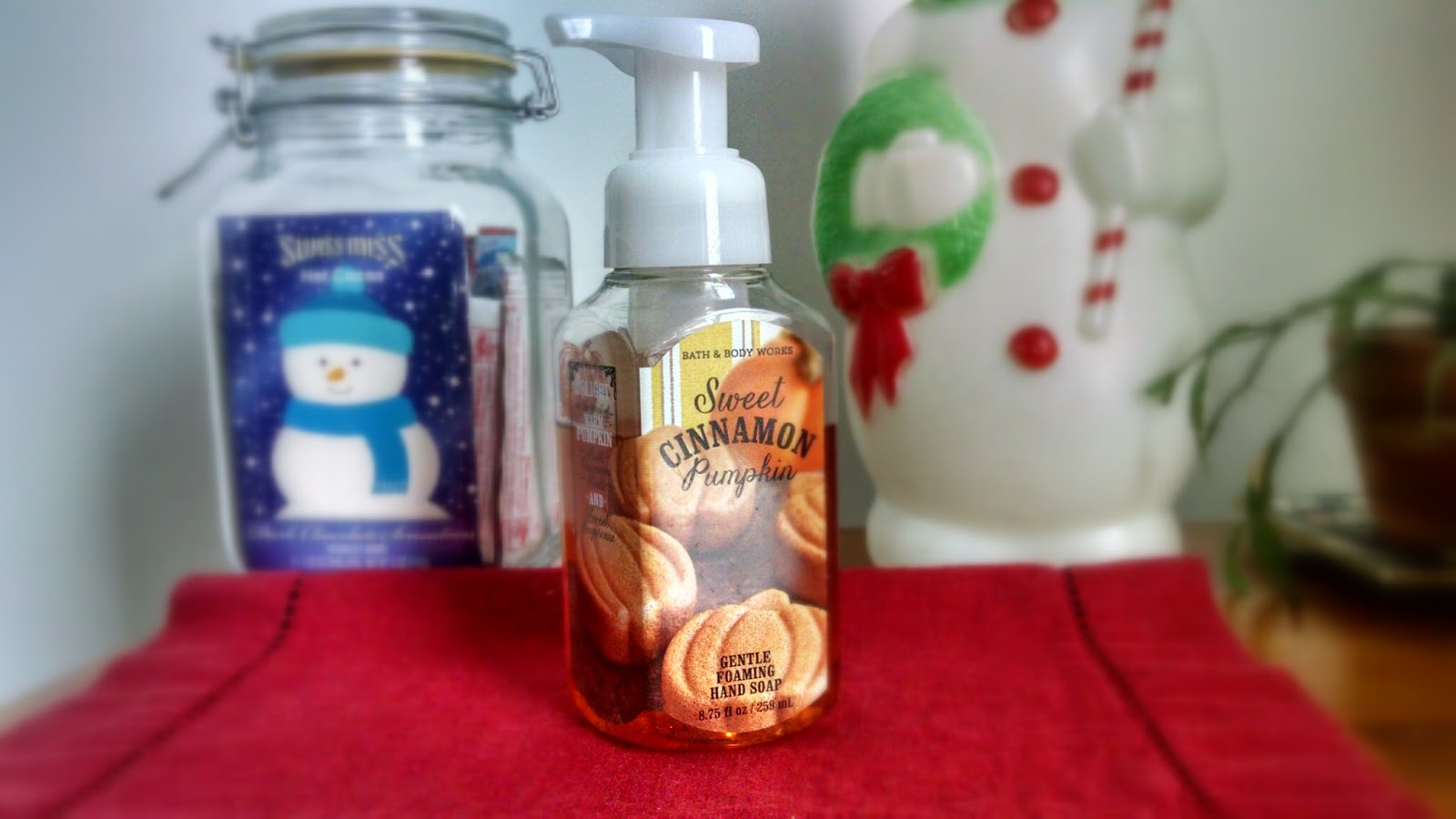 SWEET CINNAMON PUMPKIN
This one was not bad! Bought to coincide with Pumpkin Spice Season (late August through October), it does not call to mind a Starbucks latte. But, if it did, you'd probably have seen news stories about kids drinking the stuff. According to the bottle, it is a combination of Warm Pumpkin, Fresh Cinnamon Sticks, and Sweet Sugarcane. I smell none of that, so I would make a terrible Smell Scientist. I guess I haven't made terrible career choices, after all! 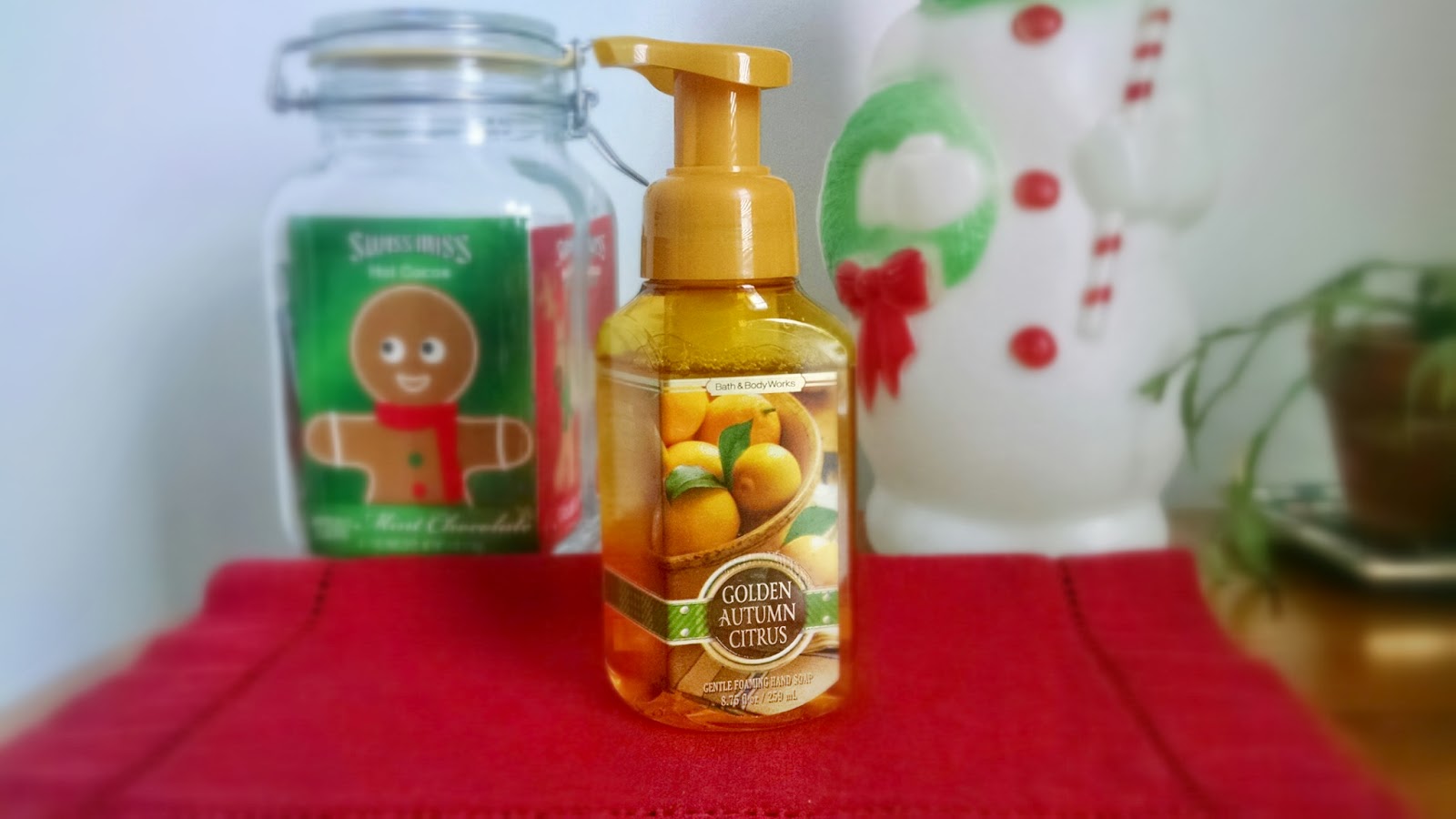 GOLDEN AUTUMN CITRUS
When October started to wind down, I decided to switch over to Golden Autumn Citrus because it sounded the most obviously "Autumn-y". Now, because I think hands are supposed to smell cleaner after washing, I only used this one once. A blend of Sparking Citrus, Verbena Leaves, and Juicy Nectarine, it smells like lemon-scented cleaning products and dead leaves. Well, I guess technically it IS a "cleaning product", but you know what I mean. Surely none of the others will be worse than this one... 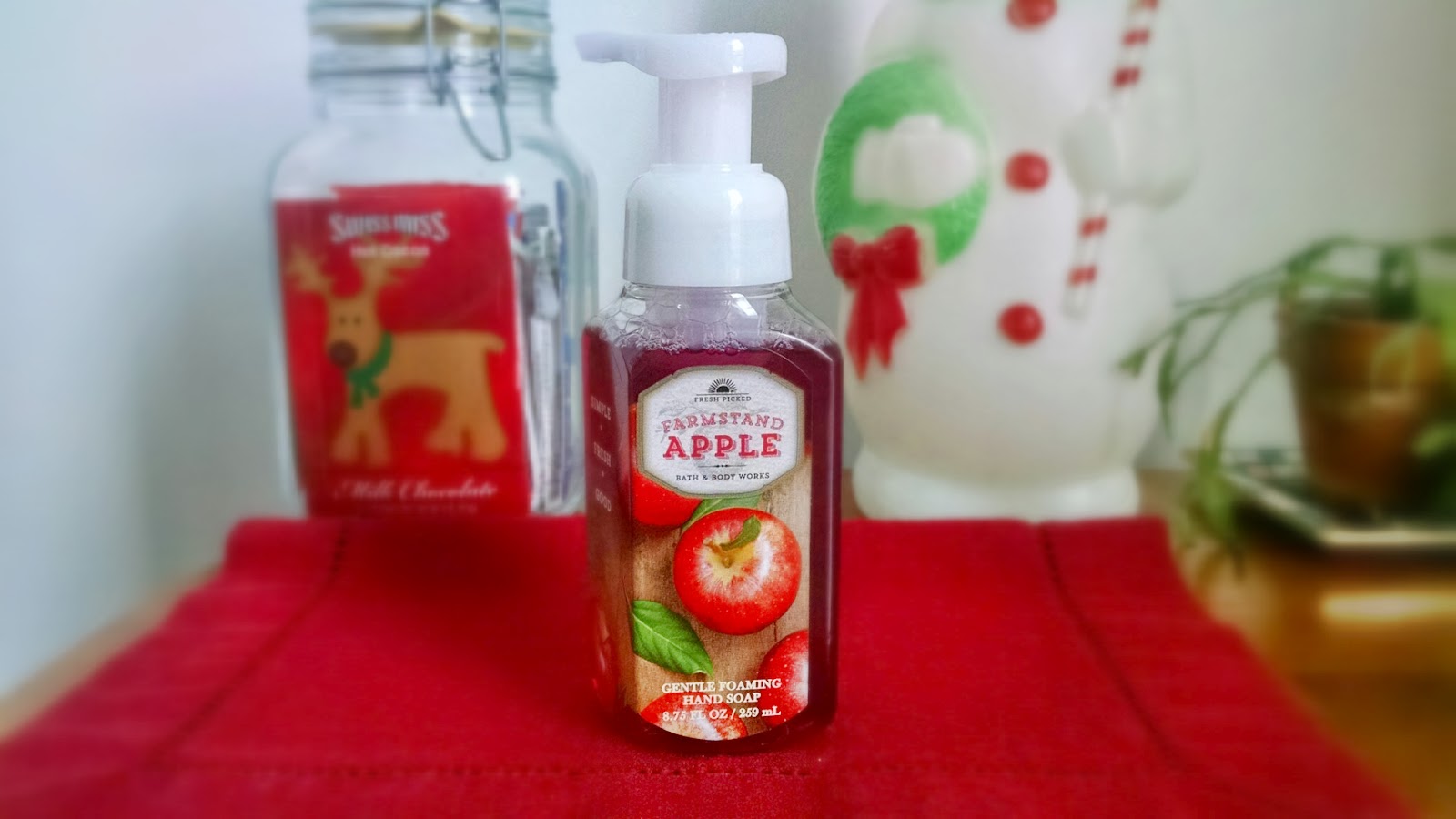 FARMSTAND APPLE
HOW WRONG I WAS! Ever visit that place where they make cider? Probably called a "cider house"? Me neither, but I imagine that the detritus and refuse from the cider-making process - heaps of apple peels, sitting around, clogging every corner and crannie - starts to ferment and really stink. It's like any industrial process, I guess ... YES, you get to have an iPhone, but you've just caused three pounds of mercury to be dumped in China's water supply. But I digress. What I mean is: This soap smells like discarded apple peels, mixed with bleach, so that the rats don't come around.

But, thankfully, I was through the worst of them. On to more wonderful-smelling soaps! 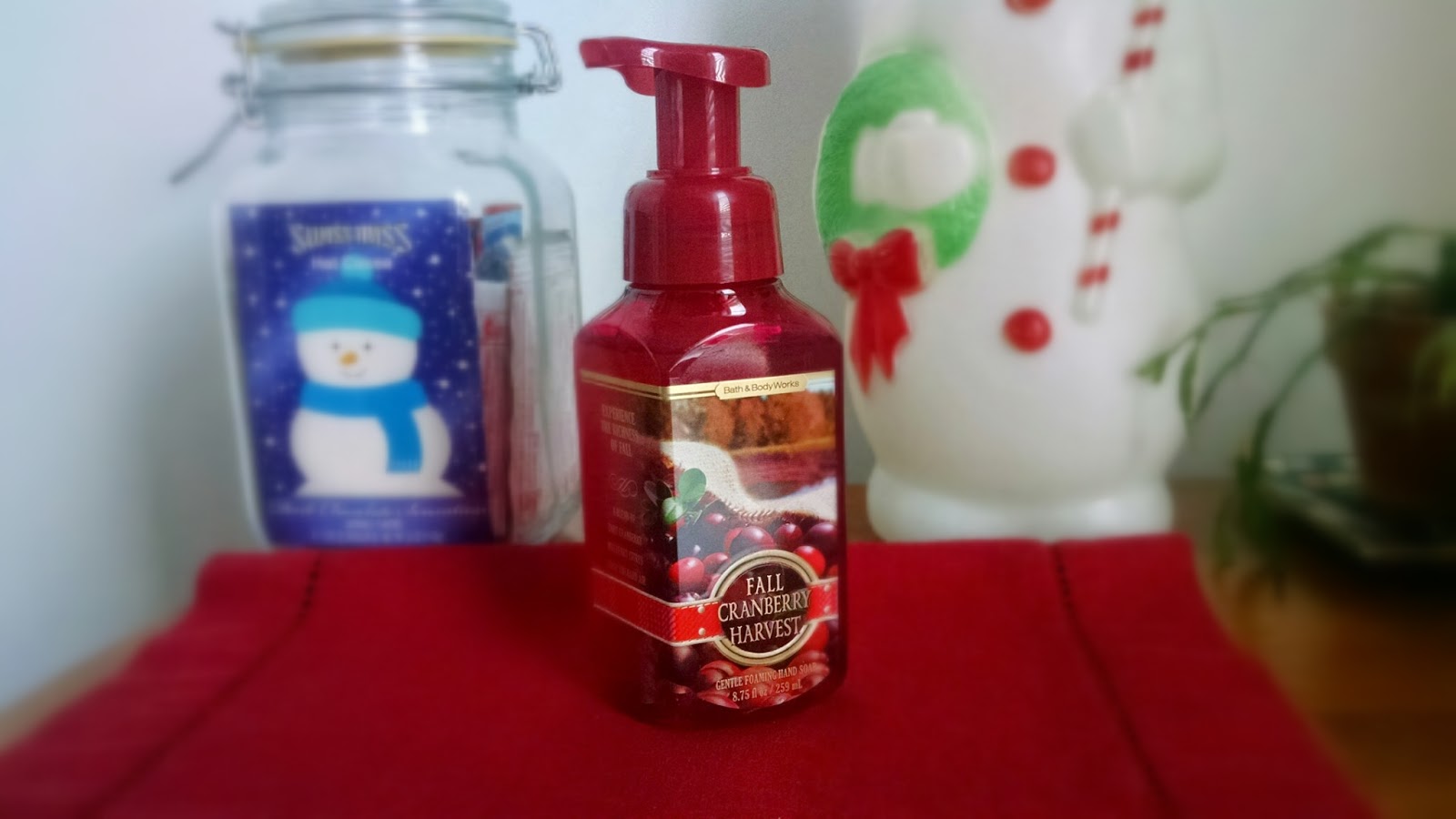 FALL CRANBERRY HARVEST
HOW WRONG I WAS! After quickly re-sealing the Autumn Citrus, I popped open this one only to pop it closed and pop it back into the closet where it'll stay for god knows how long. I paid good money for these, I'm not going to just pour them down the drain. Can I donate them? That seems cruel. "Here, under-soaped poor person, I HATE these, they smell foul, but surely your standards are lower than mine!" Everything about that sentence makes me sound like a terrible person, I know. Every day is a struggle to be a better person. Never forget that. And if somone holds a door open for you, always say "thank you".

For the record, this one is a blend of Tart Cranberry, Mulberry Citrus, and Crisp Orchard Air. I never really enjoy fake "air" scents. Maybe because I'm smelling real air all day, so I don't really need the fake stuff. 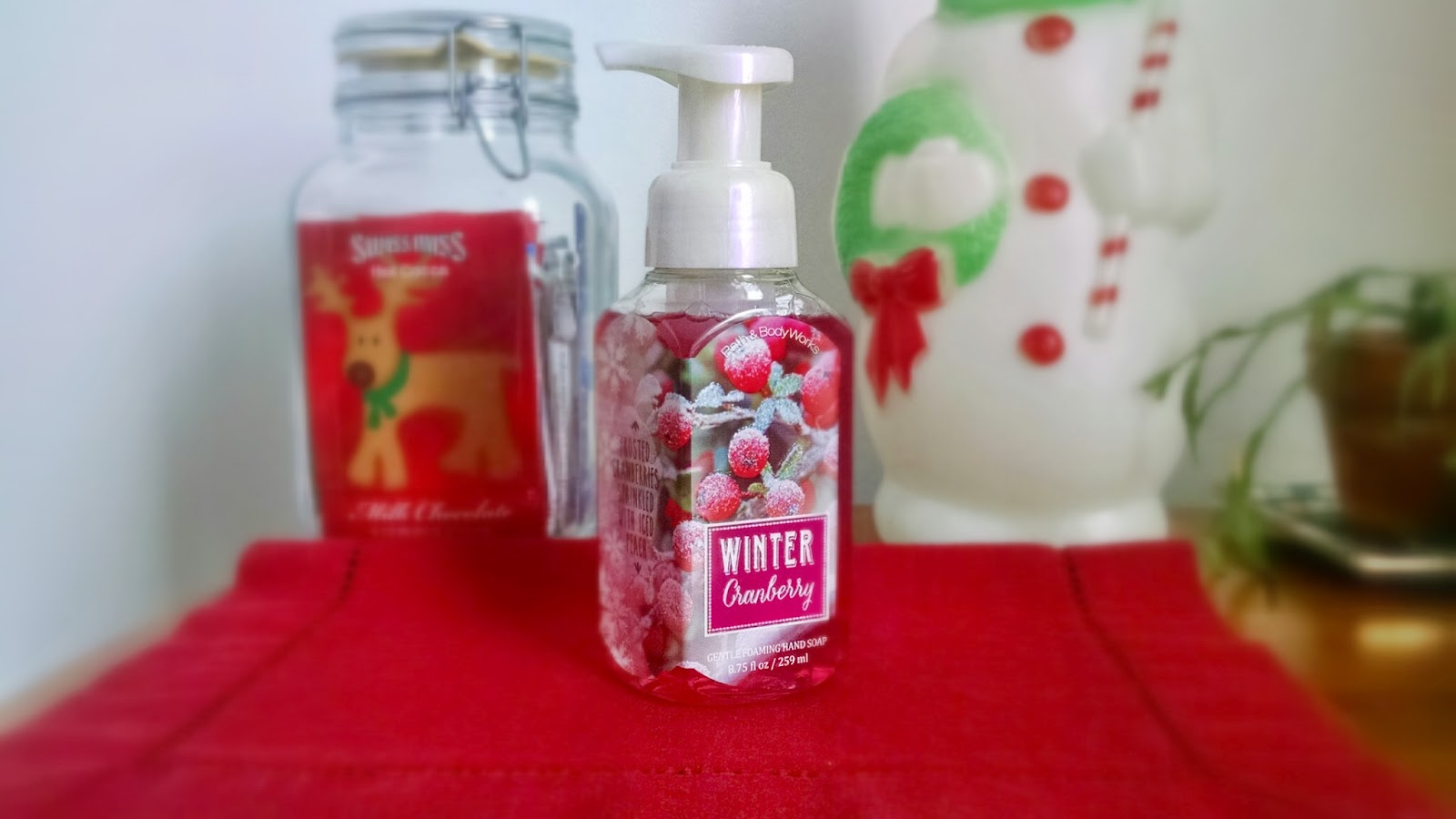 WINTER CRANBERRY
HOW WRONG I WAS! This one is heralded as "Frosted Cranberries Sprinkled With Iced Peach" - yes, it really says that. Can you sprinkle one liquid onto another? I feel they don't understand physics and that makes me even madder at this scent that, quite frankly, I cannot describe because I've been sitting here writing this post for about 30 minutes and huffing scent after scent trying to get a "bead" on how to describe each of them in interesting ways (and failing) and I have definitely overloaded my scent muscles and I'll never smell anything ever again. I think I'll miss the smell of pizza the most.

SIDE NOTE: For those of you who don't know what "foaming" hand soap is, it does this, when you pump the bottle: 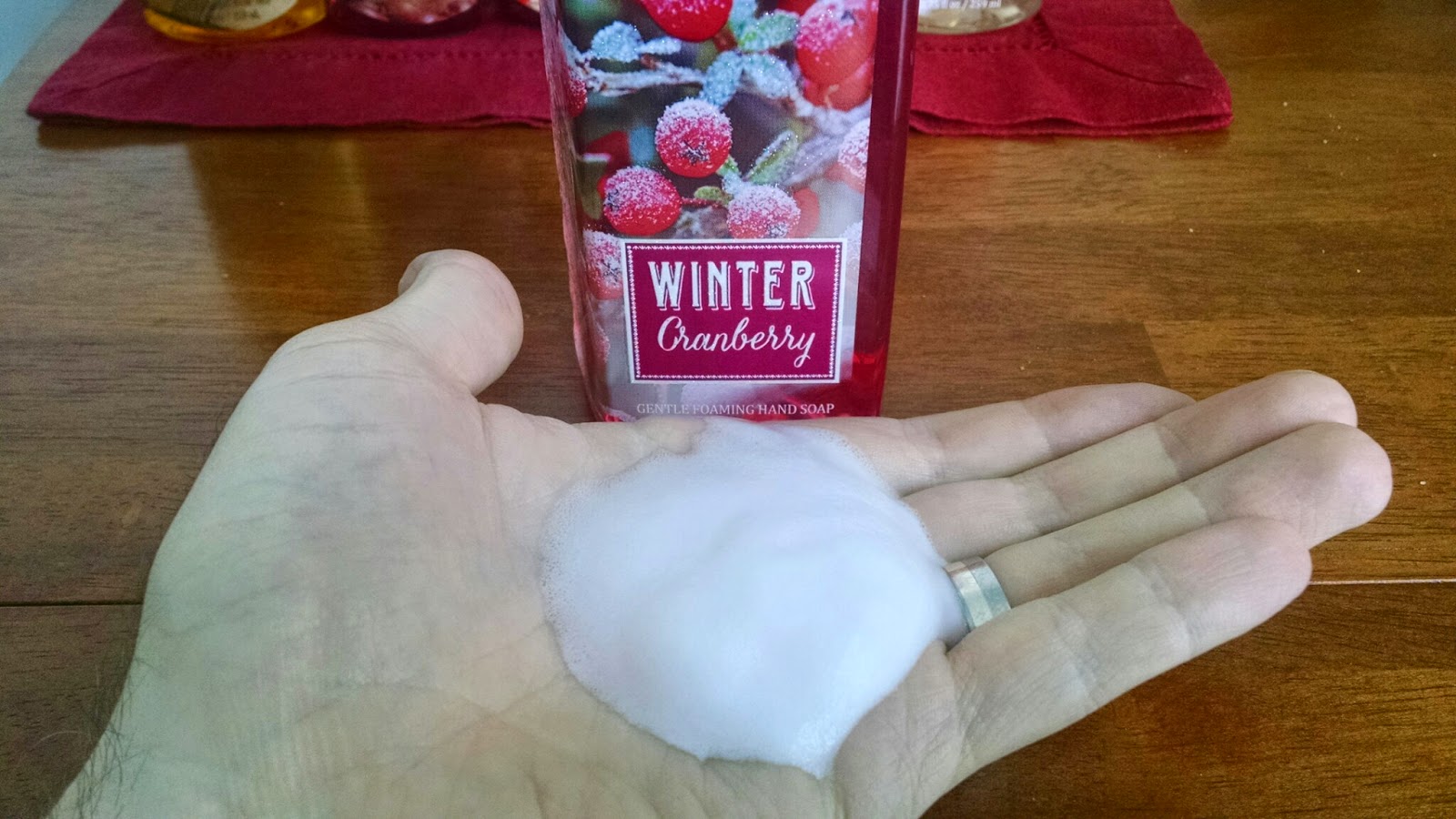 Ick. I will never be a hand model.

Here's something else I've learned and I want to pass it on to you, so you can then pass it on to future generations, since I am not having kids any time soon: You can't trust the smell directly from the bottle. Unscrewing the cap and taking a big ole snort doesn't convey the true terror that awaits once the thing is aerated and rubbed onto your hands. In fact, the Winter Cranberry smells perfectly delightful, straight form the bottle, but like a nasal nightmare, when used correctly. Since that's the case, maybe I should just crack the bottles open and leave them around the house to "emanate". Nope. I just know I will abruptly knock every one of them over and ruin our floors, couch, bed, and - somehow - our ceiling. And we rent. 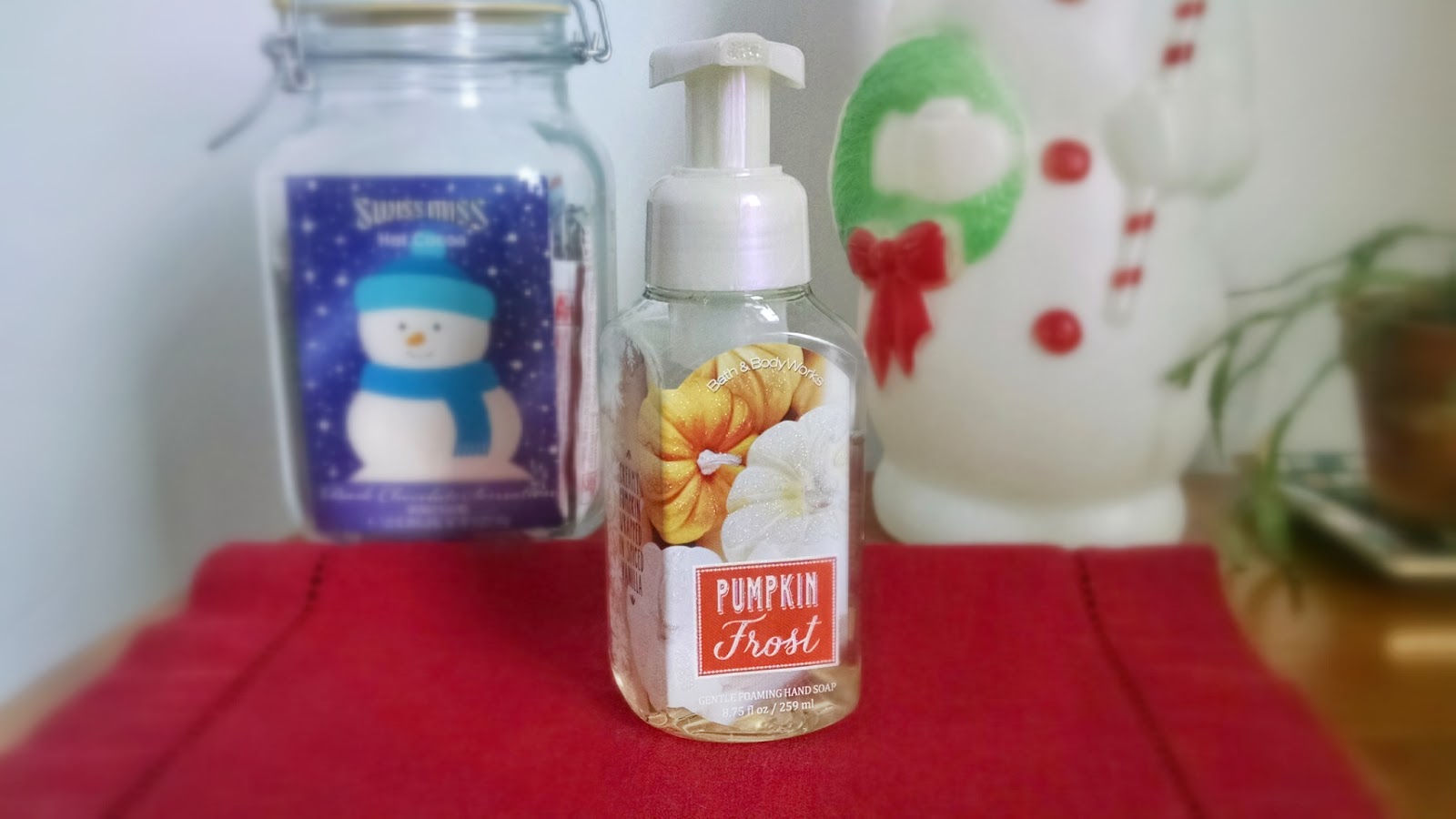 PUMPKIN FROST
Having already had a bad run-in with one "frosted" scent (Winter Cranberry), I was hesitant. But this one is actually delightful! After the failure of all of the other scents, this is the one I am still using. My beautiful wife doesn't like it, though, so she has her own soap. Yes, our bathroom has more than one hand soap on offer. We're like the Rockefellers, up in this 1-bedroom apartment! After using our toilet, it's like a fancy hotel in there. Options! (For the record, my wife uses Sweet Clementine. It is a perfectly acceptable all-year-round scent that occasionally dabble in, myself. I'm not ashamed.)

A warm scents that is "Creamy Pumpkin Wrapped In Spiced Vanilla", it smells like a pumpkin cookie. Chewing my nails used to be a nervous habit, now it's a delicious nervous habit. Outside of taking umbrage to their use of "wrapped" in the description, the only other down-side to this soap is that I continually think "Pumpkin Frost/Nixon" every time I wash my hands. Then I giggle. Because I think I'm clever. 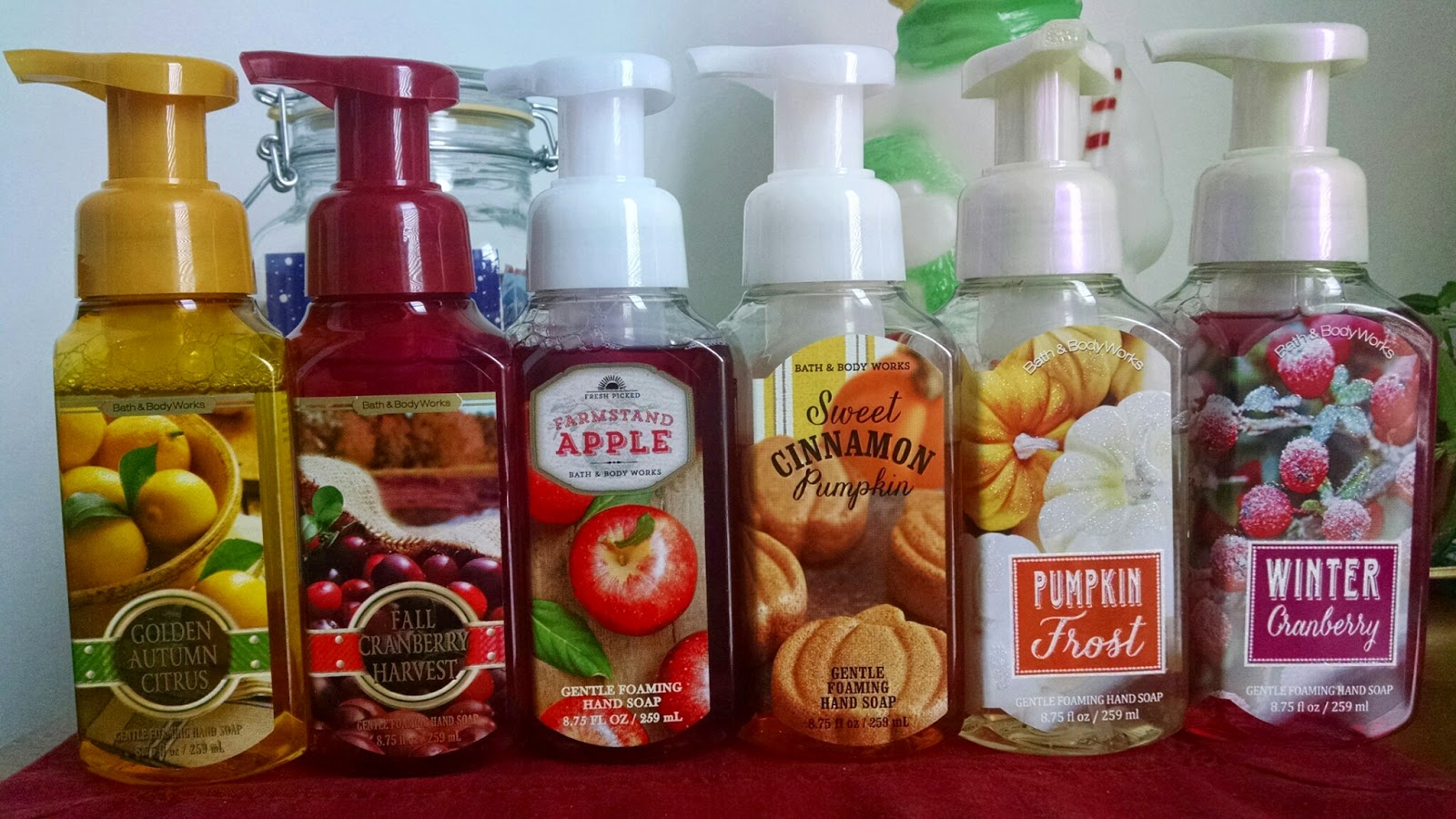 And there they are: A huge waste of money. Anyone want them?

Let's try this: In the comments, tell me what YOUR favorite hand soap "flavor" is! Let's "start a conversation"! Audience engagement!

I can be followed on Twitter @sommerjam. DO IT NOW!