An Ode To Decorative Spider Webs

Yes, Halloween is very, very over, but there are so many posts I didn't get to post, because I ran out of time, so you're just going to have to imagine it's not November. (I find drinking helps me forget*. Try that!)

One of my joys is walking around the neighborhood simultaneously admiring and judging people's decorations. Since a child, I would look at all of those trees and front-yard shrubs covered in clumpy, stringy fake spider webbing and rant, "They're not doing it right!" and "Ya gotta pull it! PULL it!" So, after 37 years of hands-off critique, I decided to show the world how it's done and go hands-on!

PS - I decided this, oh, about three days before Halloween, so all the regular spider webbing was sold out, leaving me with: Though I usually like my decorations to be scientifically accurate, I was in a pinch, so this day-glow, fluorescing, ersatz spider-butt product would have to do.

But let's take a closer look at the bag! 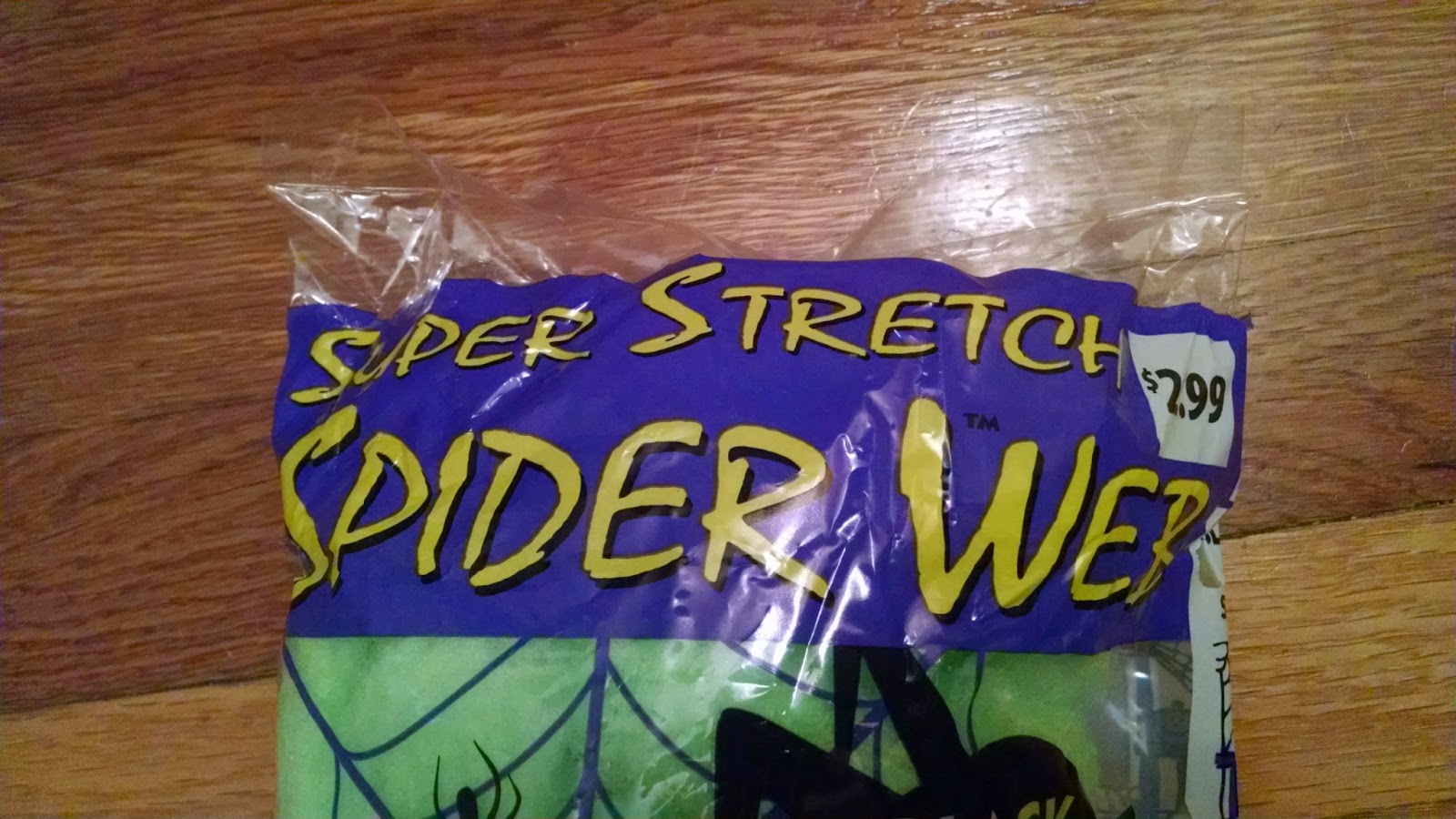 Don't worry, guys, I didn't pay $2.99 for this. Being a Rite Aid Wellness Card Member has its perks! 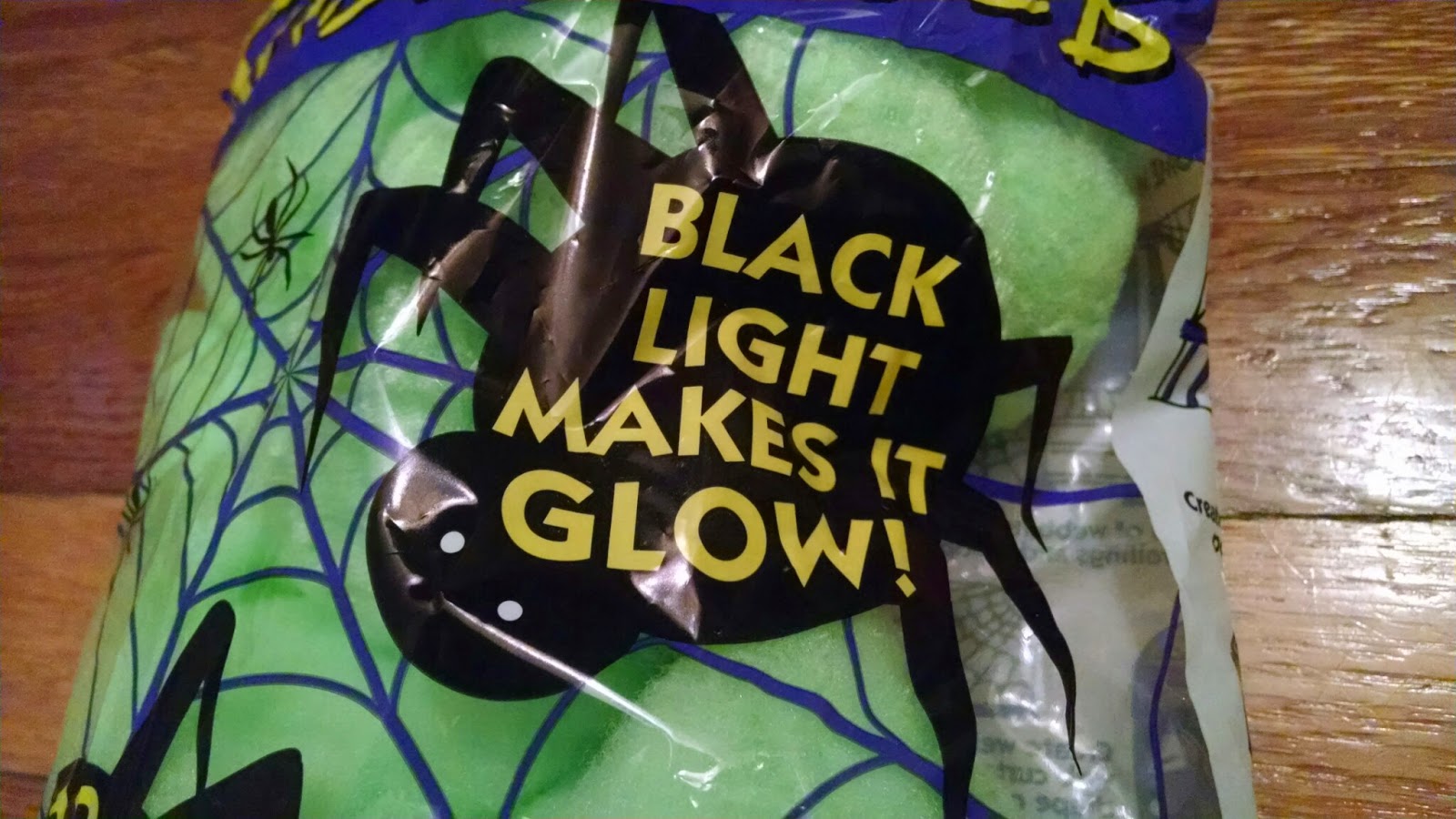 You're really testing my "I like things scientifically accurate" stance, here, six-legged "spider"! Or maybe this is just "insect webbing", not "spider webbing"? Is there such a thing and would I find that more or less disgusting than spider webbing. I'll consider it and get back to you. 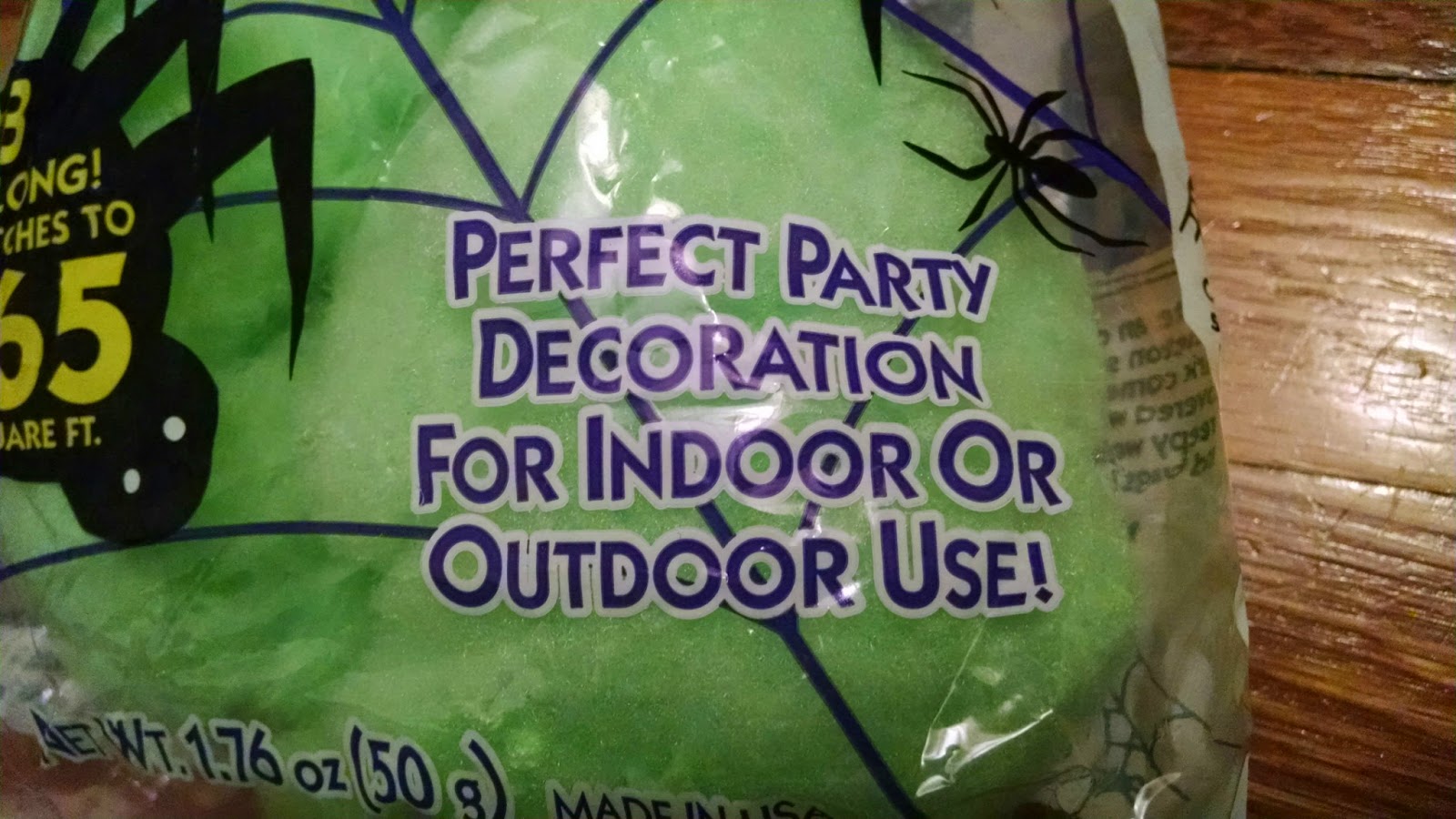 They do not qualify it being a Halloween party, so be sure to stock up for your cousin's Quinceañera. Also: Ever see this stuff after a Halloween outside, exposed to the elements. Even the most frugal of us are hard put to wad it all up, dead bugs and leaves and all, and put it somewhere in our house for another year. Nope. Best to join the Rite Aid Wellness Card Club and save on purchasing all new spider webs next year! Rite Aid: Where we do spider webs right! If you're wondering how that math works out, to have 165 square feet, with one side being 13 feet, the other side would have to be 12.69" wide. That sounds weirdly accurate. Were they worried parents wouldn't buy it of it was 13 feet on each side, making the bag say "169"? NSFW webs. 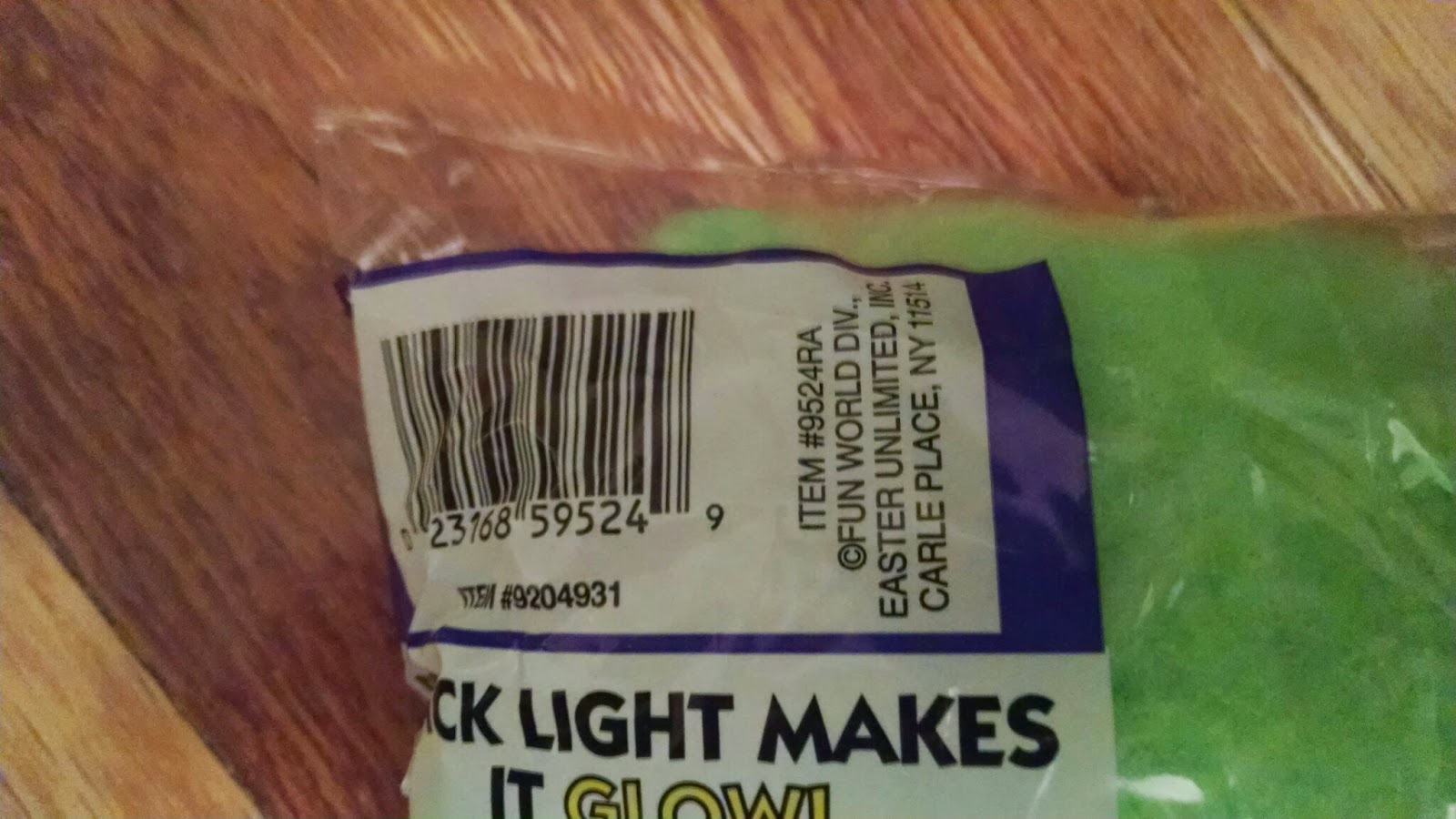 The Fun World division of Easter Unlimited, Inc. I can only imagine how the receptionist answers the phone, there. A droning, I-hate-my-job monotone of "Fun. World. How can I *sigh* direct your call?"
Still, made in the USA! We're still #1 in fake spider web innovations!

A quick Google search shows me that I am just a few minutes over six hours away, walking distance! Road trip! 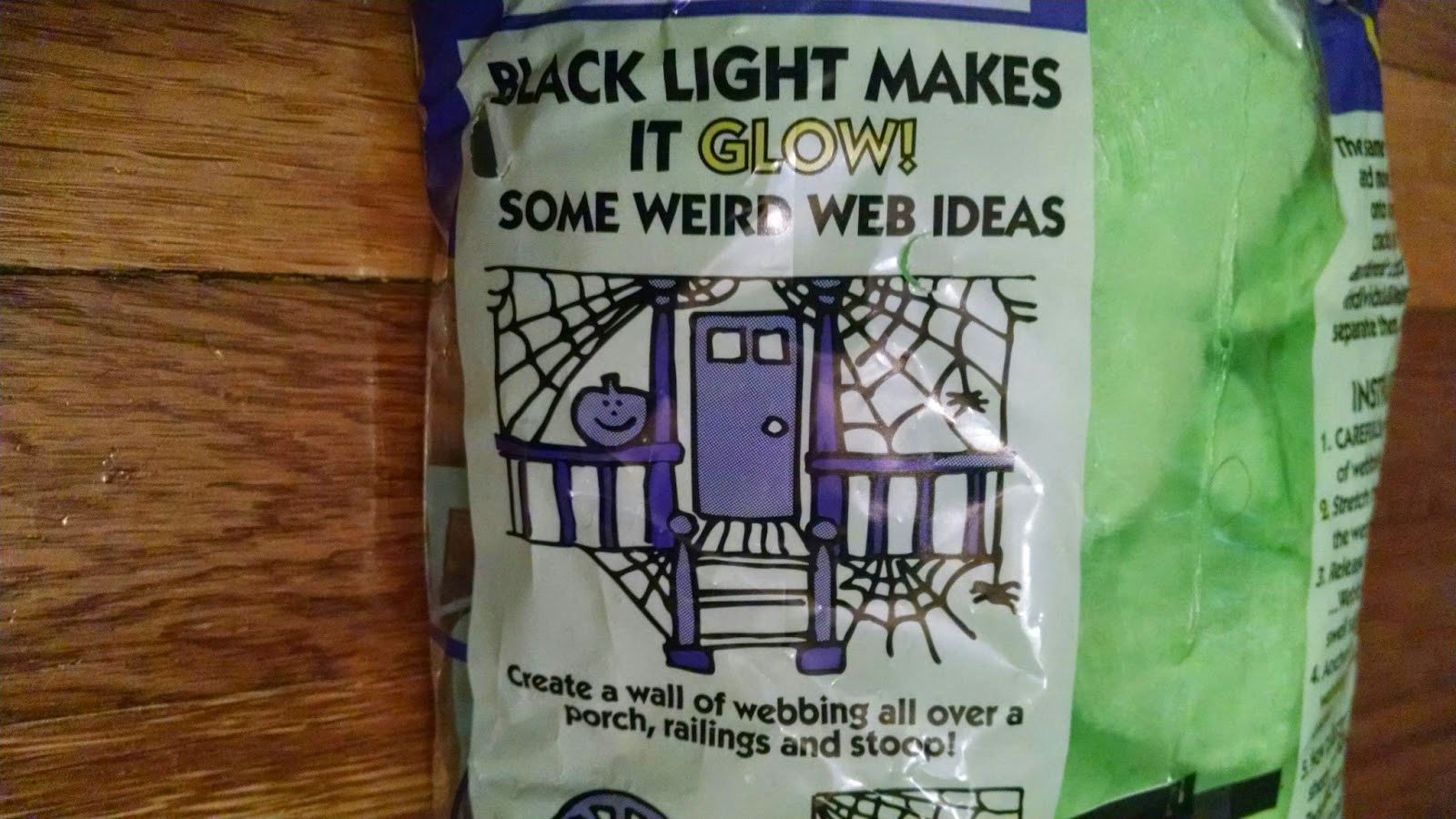 No spoilers, but I'm going to test that black light claim, later in the post. (That right there is called a "teaser". It's meant to keep you reading ... wait, you just scrolled down to the bottom, didn't you. Ugh.)

I take issue with them calling that first illustration "weird web ideas", because they're showing us places where we normally see spiderwebs appear on unkempt houses: corners and nooks.

I like the smiling pumpkin very much, though. Hey buddy! 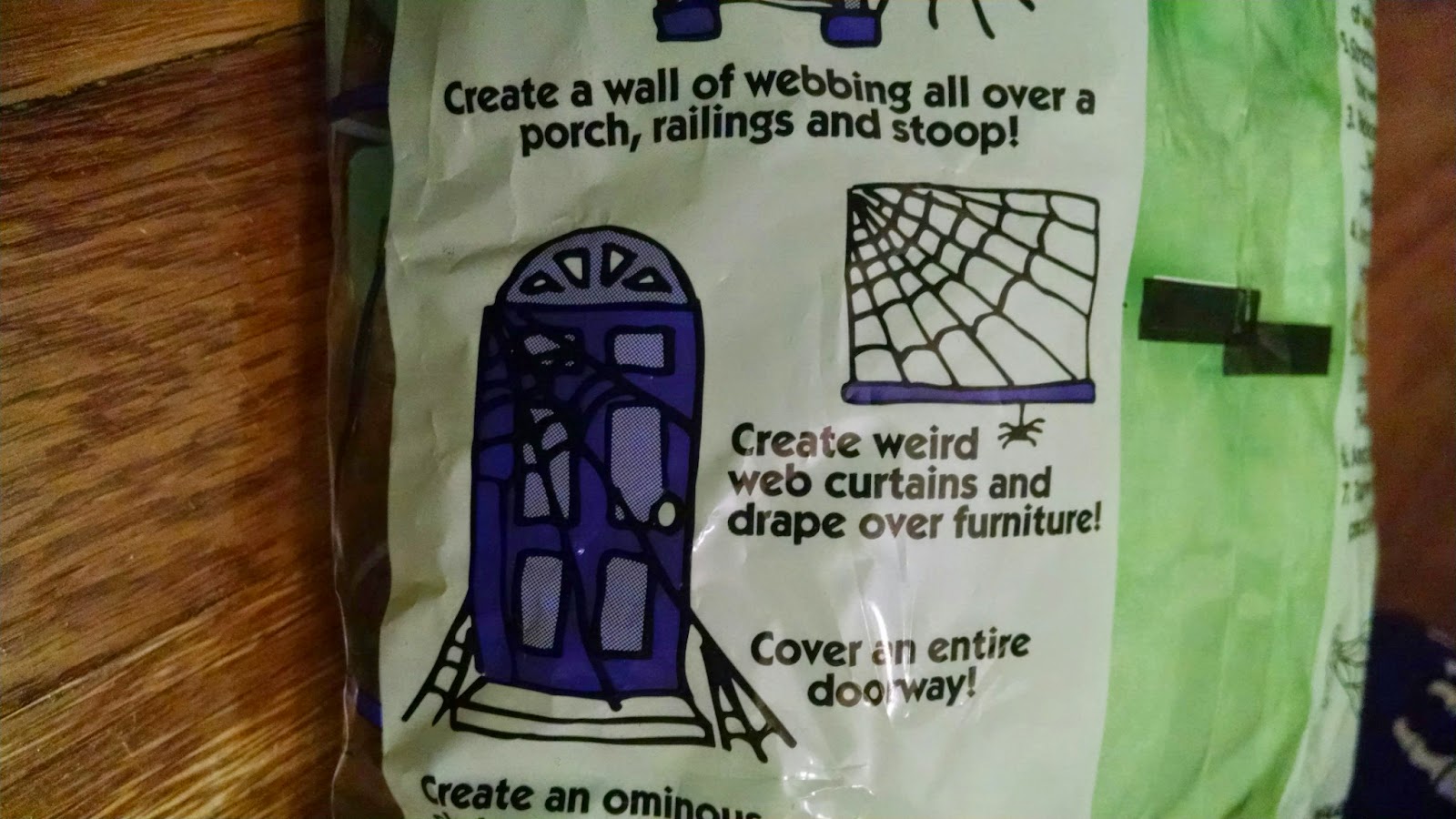 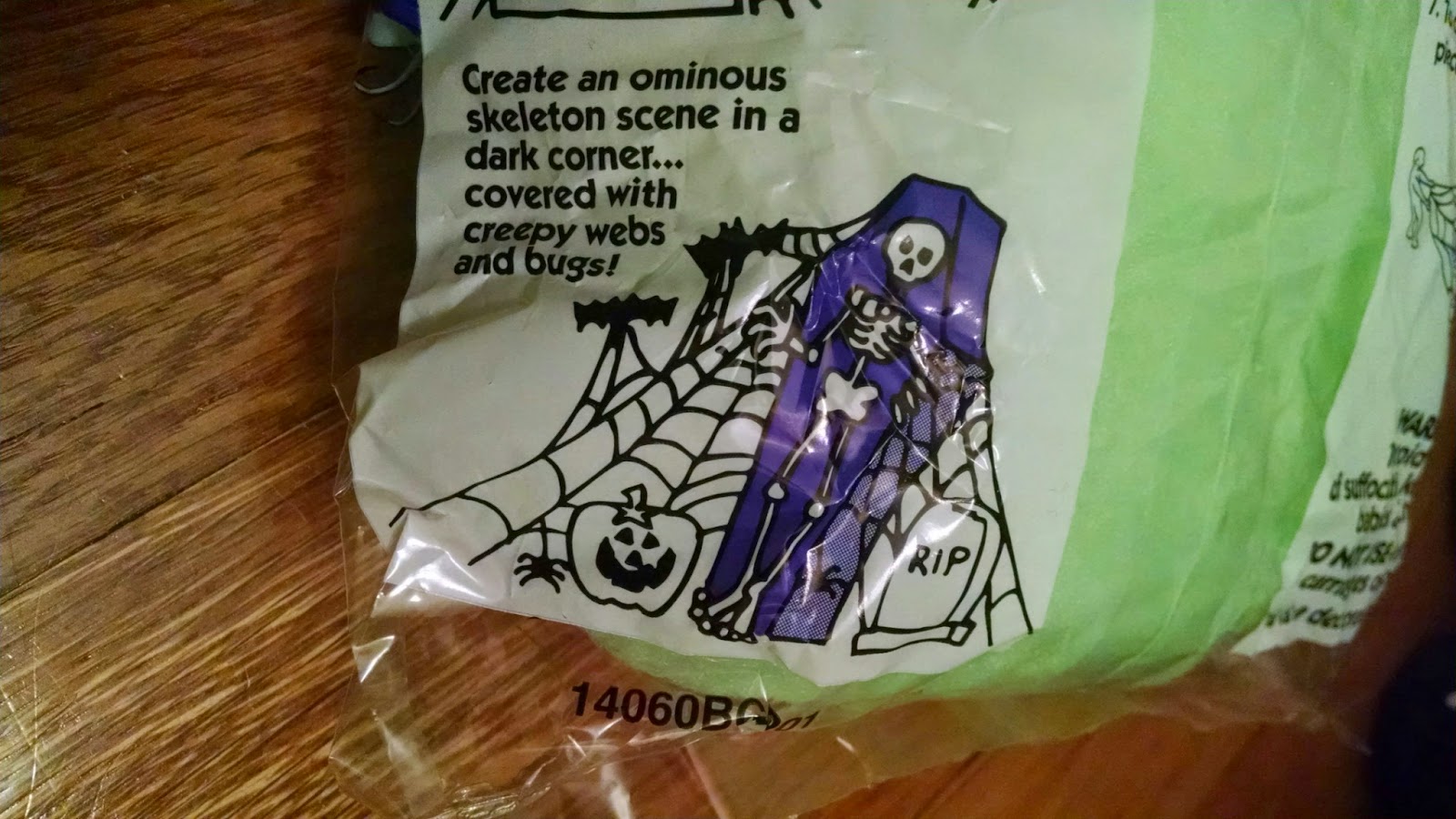 Boy, I documented the hell out of this bag, for some reason, huh? After I'm dead, I hope the living remember me as being very thorough in my picture-taking and decoration documentation. Then I hope they cover my corpse in fake spider webs, to create an "ominous scene". 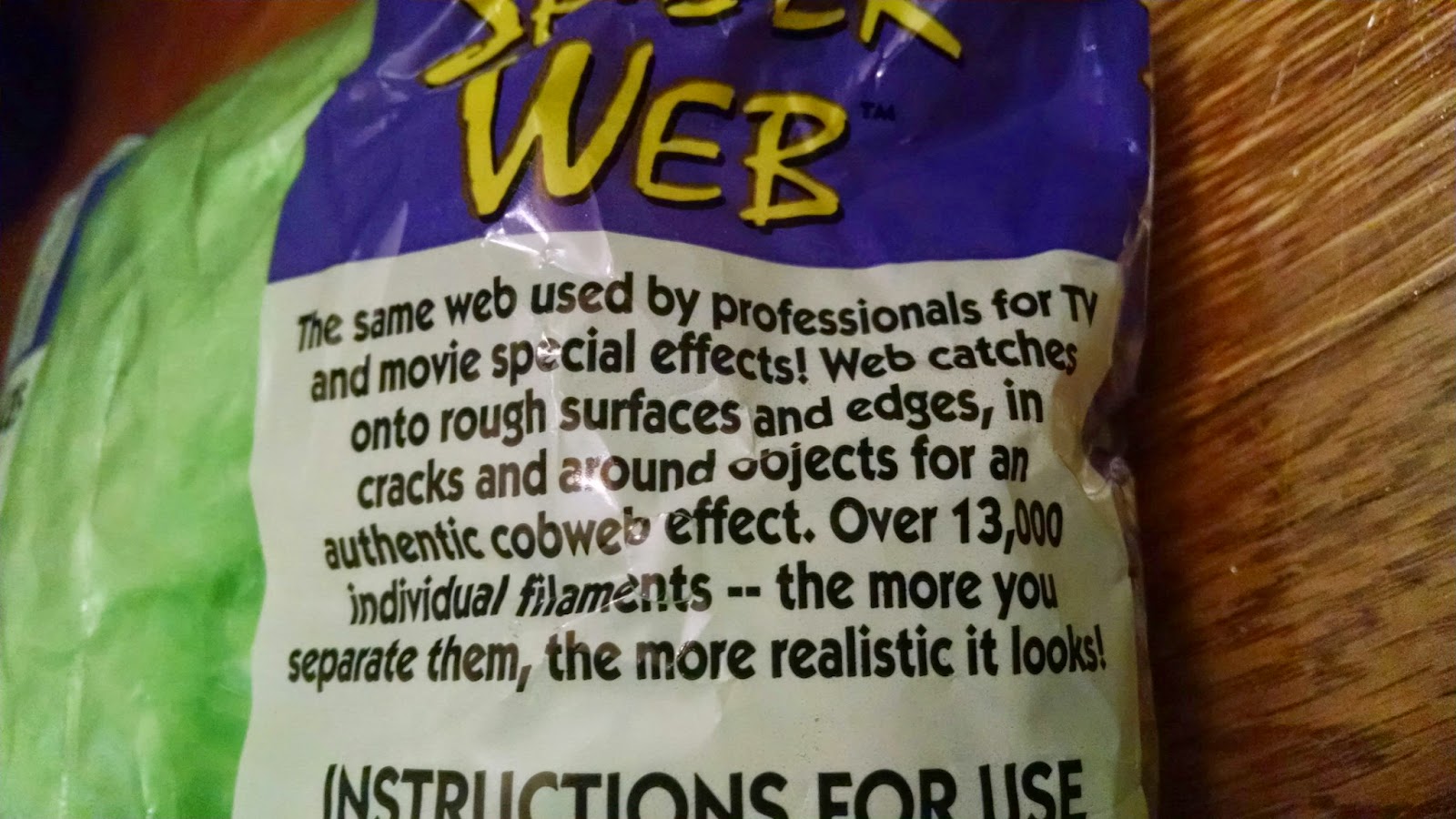 Really? The SAME web used by professionals? I find that hard to believe ... though, I guess if the props department has a tight budget and a Rite Aid Wellness Rewards Card...

But also: See, I was right! The more you separate them, the more realistic they look ... in other words, "You gotta PULL them!" It's looking good, for my hubris!

And now, here are the instructions that I followed, to the letter: 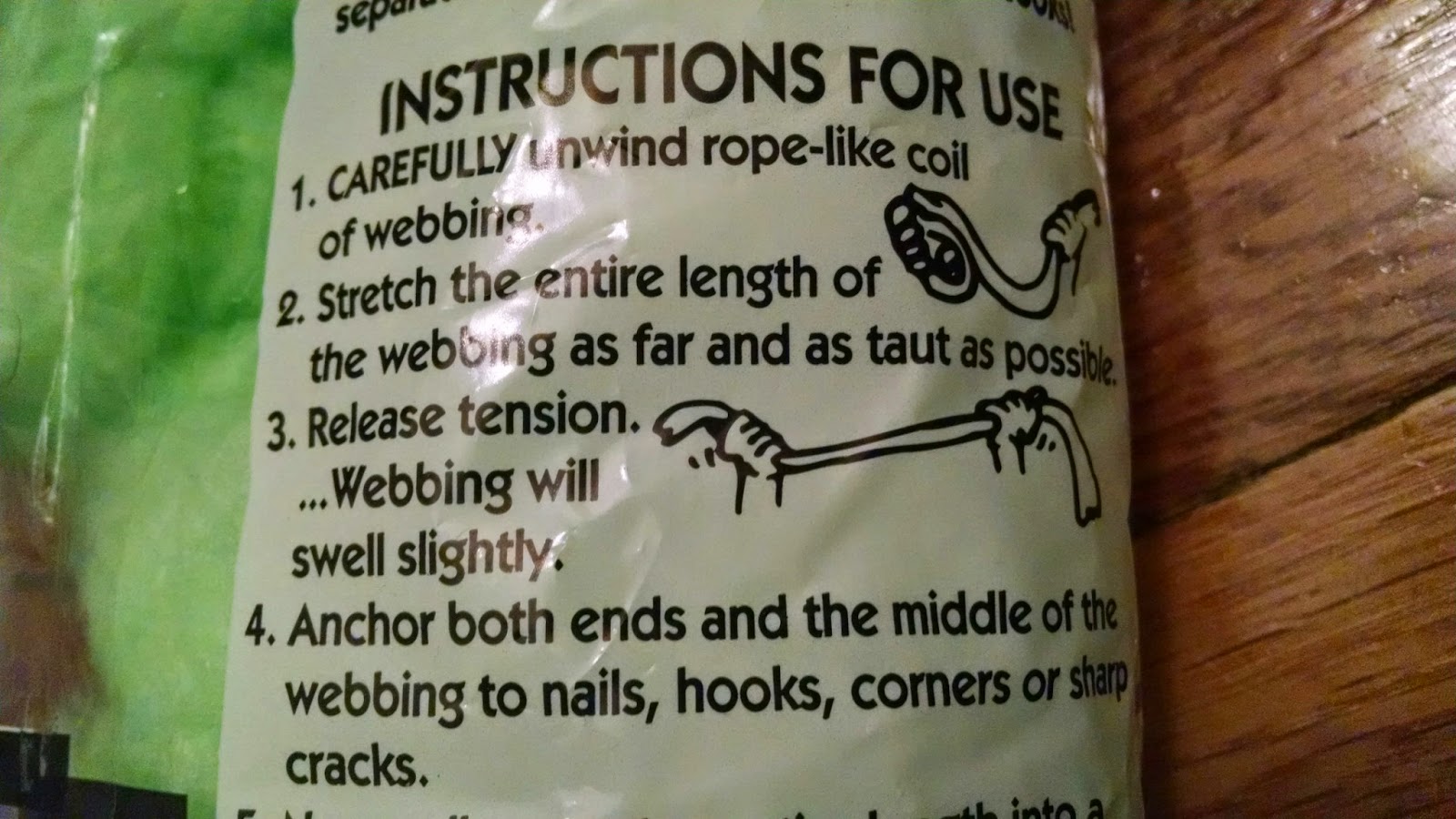 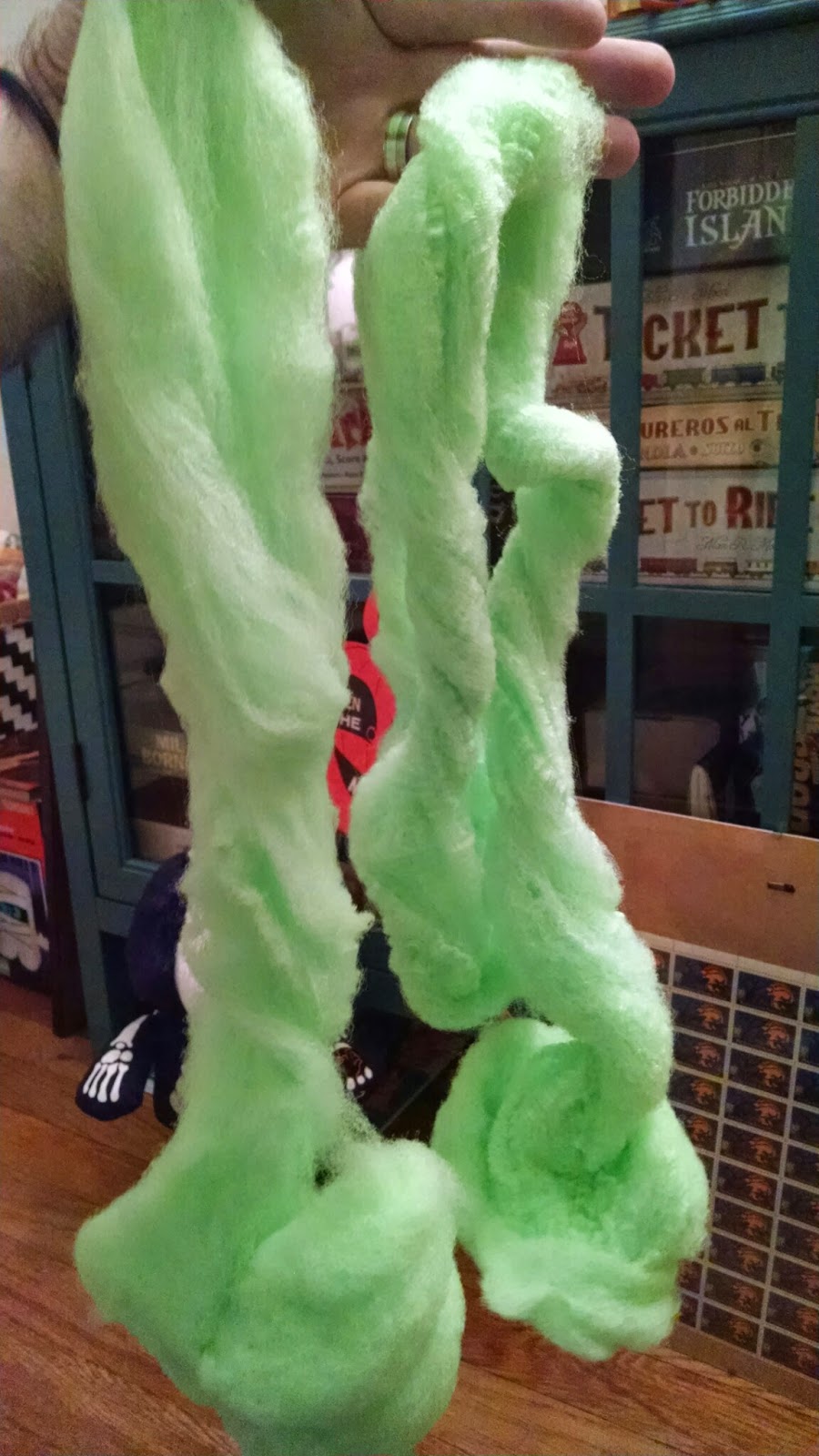 All other steps requires the use of my camera-holding hands AND those of my beautiful wife, so they won't be documented. 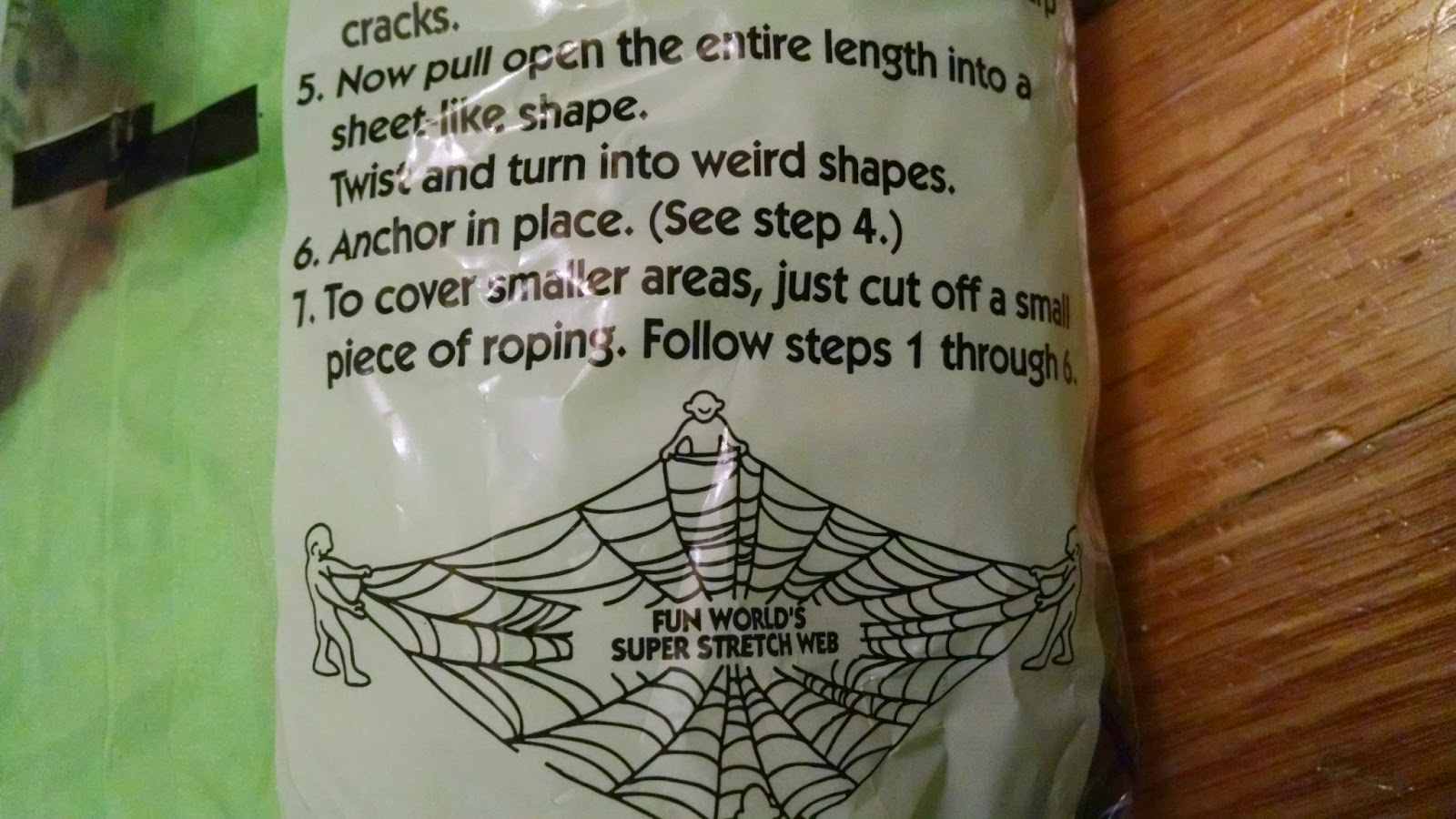 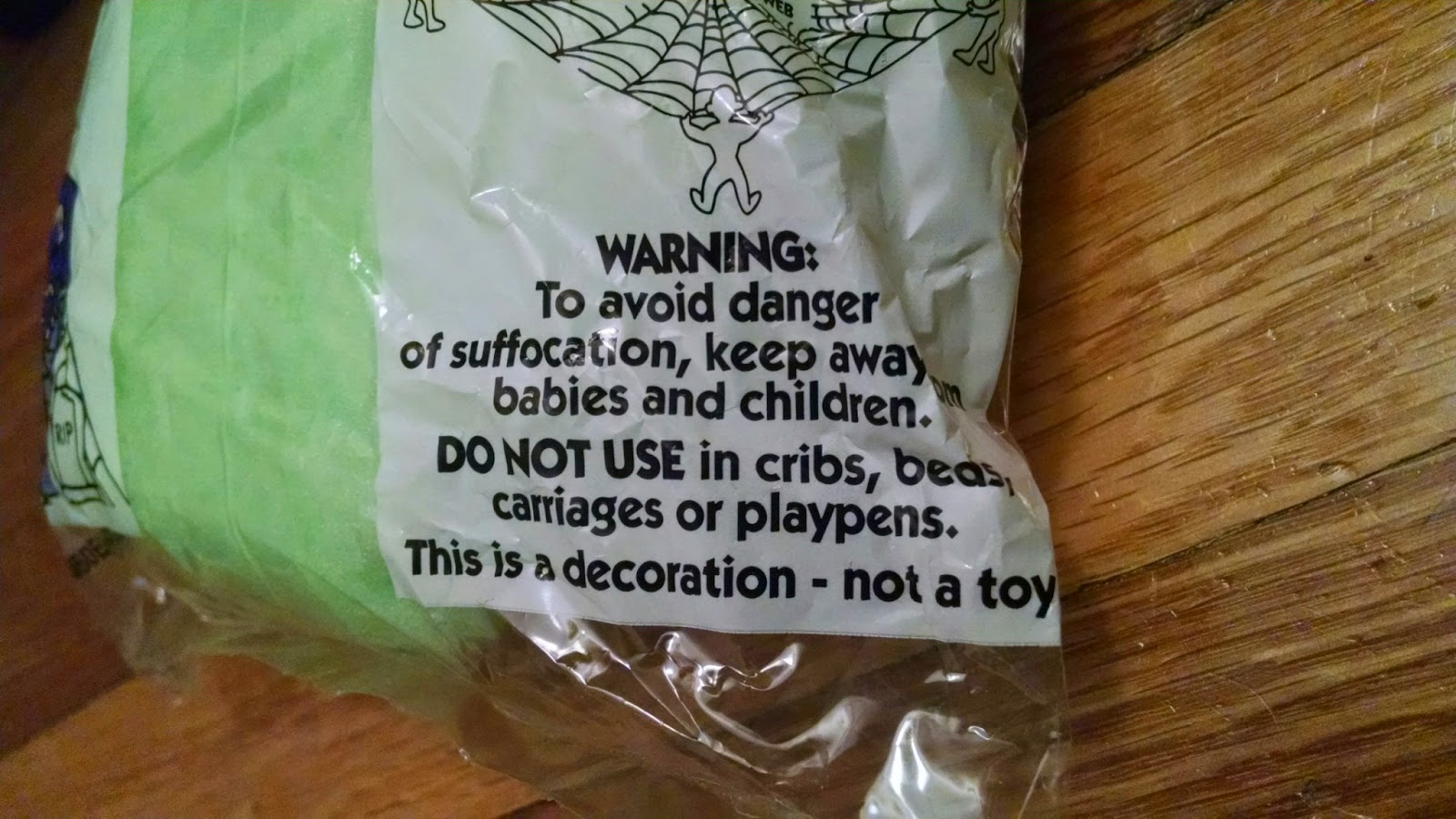 I dunno if it was just in my mind, or what, but this stuff sure gets in your throat. I was coughing and gagging by the end. All those filaments are probably in my lungs, making them look spooky. "He died of 'haunted lung'" says the doctor.

BUT, what you really want to know is: Do I know better than everyone else at how to use these fake webs?! 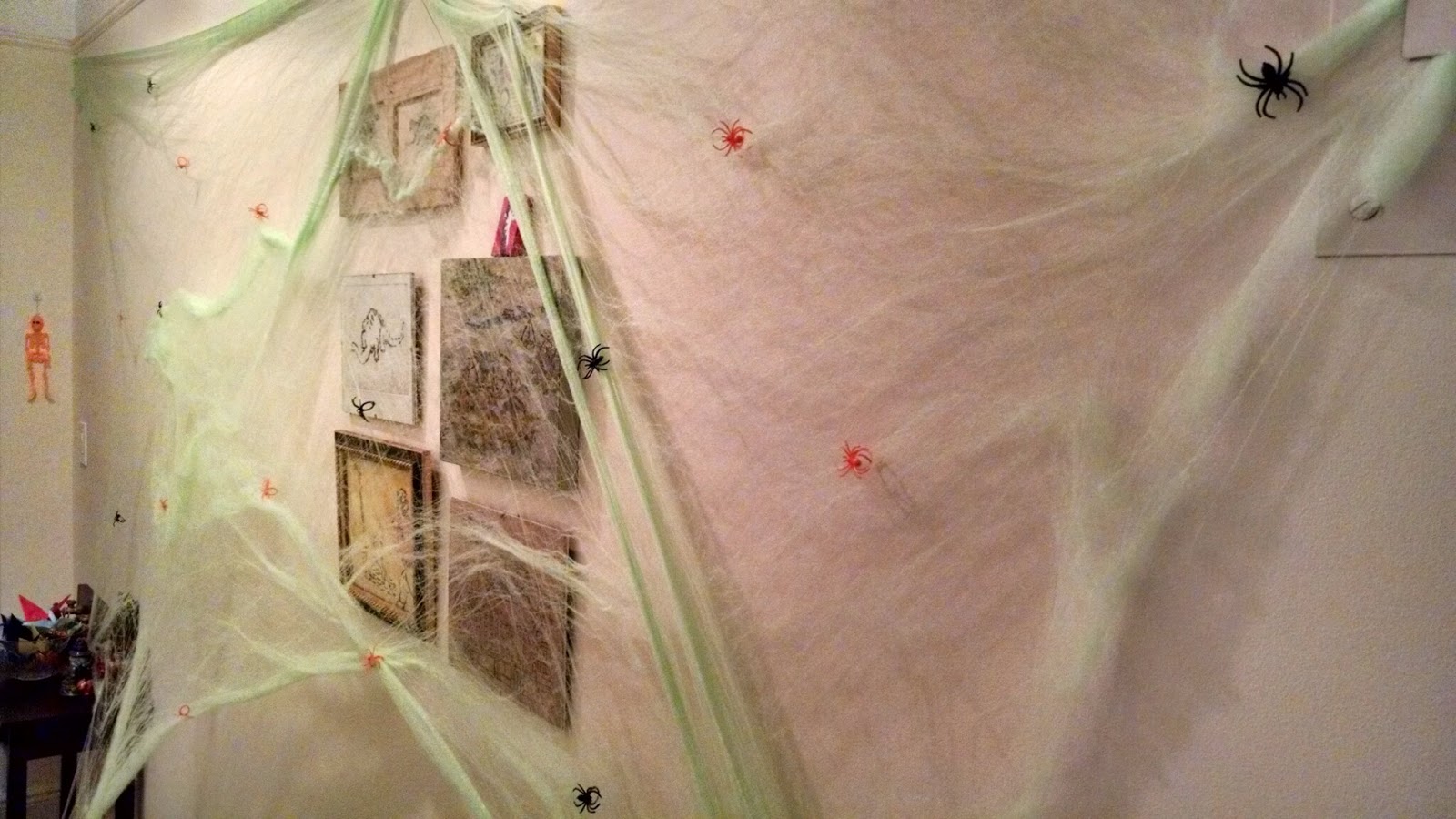 NOPE! They are frustratingly impossible to work with. I mean, look at that! What spider weaves a web like that?! Clumpy spiders? Well, I guess THAT puts to bed the old saying "If you want something done right, you have to do it yourself." Should re-word it to be, "No one can do anything right, ever; especially fake spiderwebs."

And, as promised, here's what it looks like under a black light: 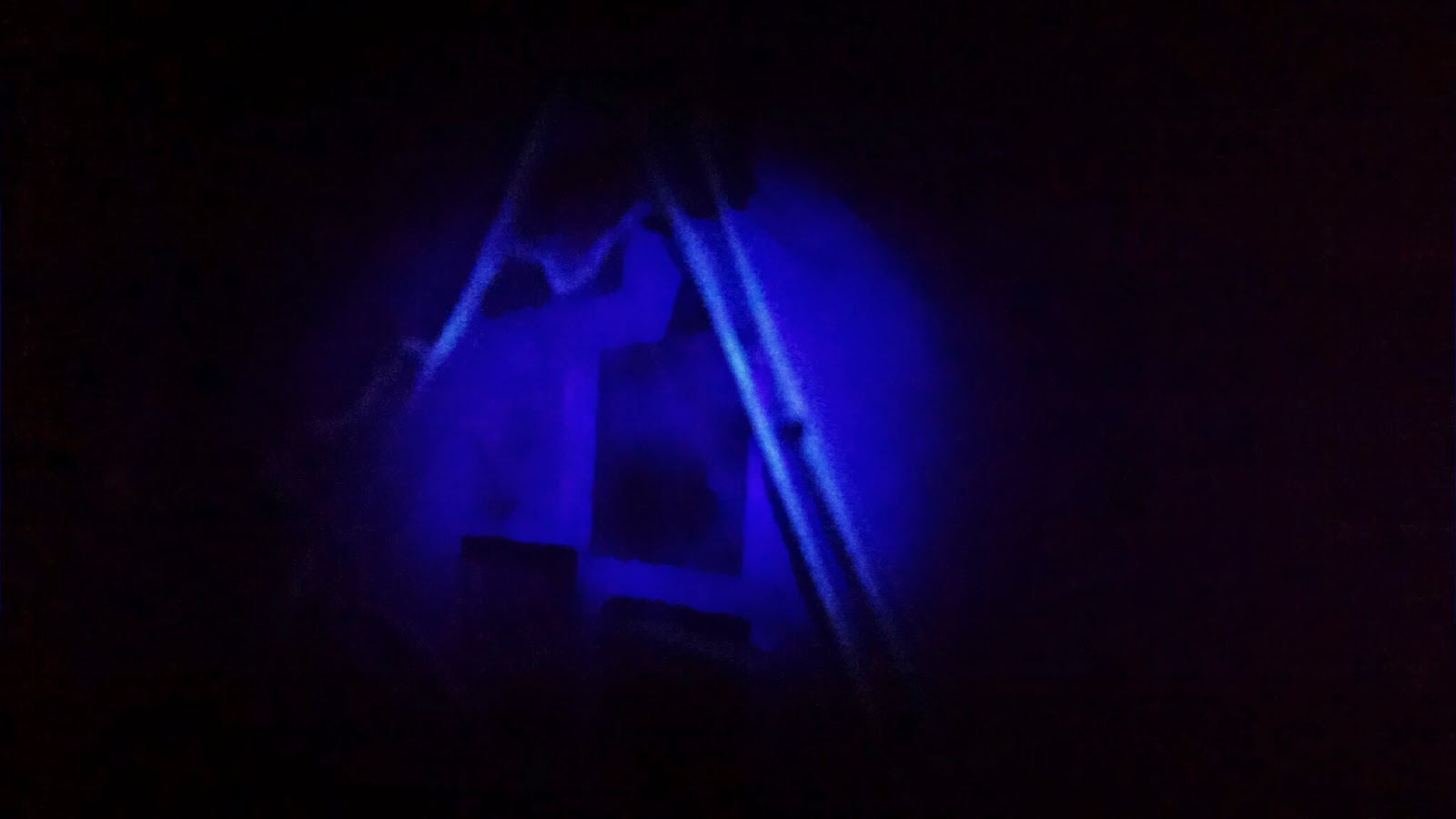 It's not exactly a black light, though ... it's a small UV flashlight we bought to find where the cat pee stains (left by the former resident of our apartment's cats) were located, so we could eliminate the smell. Nothing about that story wasn't gross, but, ey, it's Halloween, right! (Or, almost a month after Halloween, I guess. The best scares are the ones you don't see coming!)

So, it does kinda fluoresce, but it really just looks more like a blue flashlight on it, than anything else. 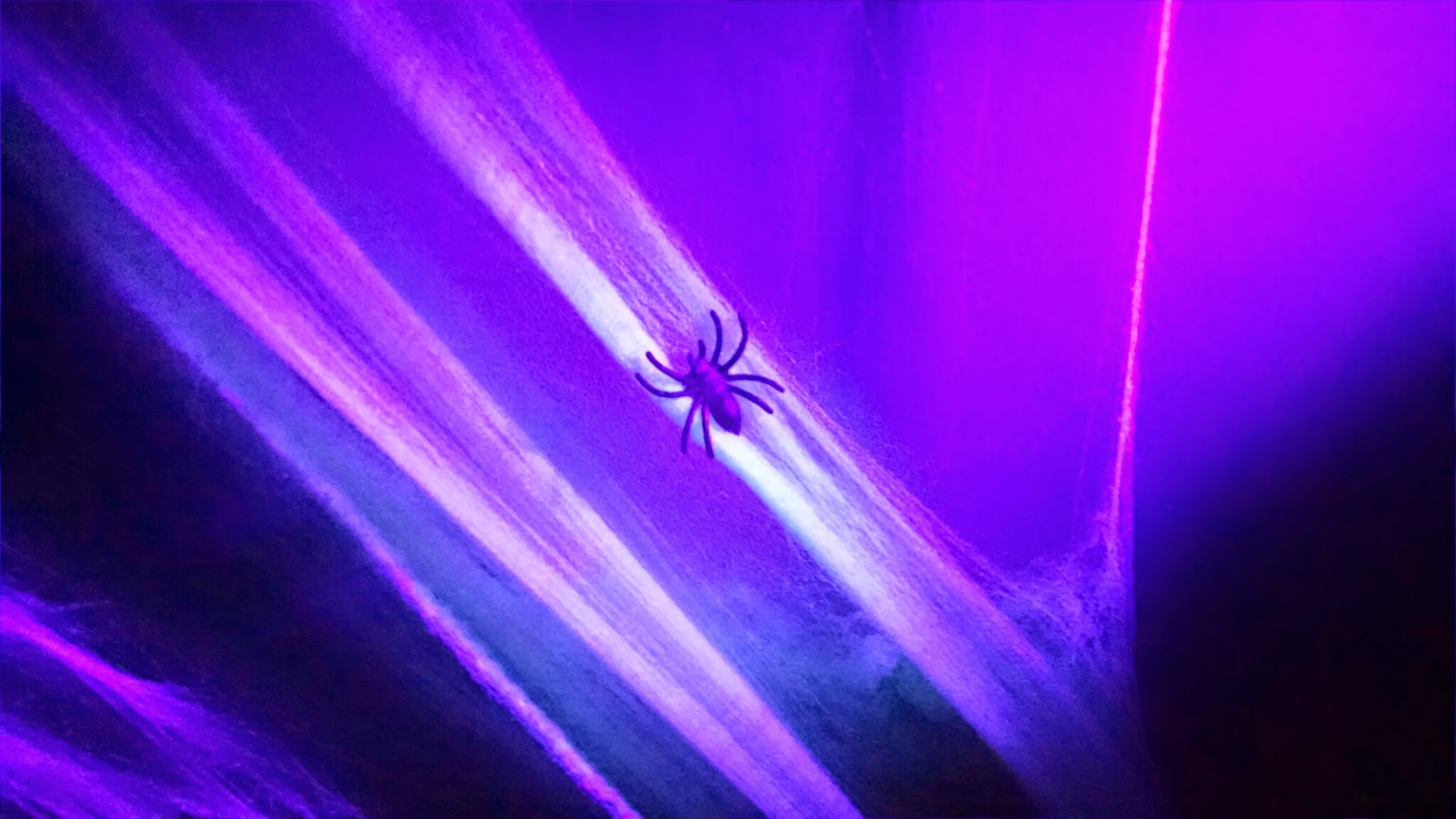 All told, I think spider webbing is way more gross than insect webbing (if it exists).


*Please don't drink to forget. Drink to be AWESOME**!
**Responsibly awesome***
***Not awesome at all. Actually, forget* I said anything.