Let's take a break from all the awesome Halloween stuff that I've been covering and travel WAY BACK to ... September 13, 2014, where we will delve into pizza.

See, on a recent trip to Michigan, my beautiful wife and I went to Walmart. Why? Because we were in town for a wedding.

To many of you, Walmart is a commonplace thing that you take for granted. Many of you "own cars" or "don't live in the greatest city in the world (New York City)", and thus have easy access to that paragon of weird people. (Be real, ok? Everyone in there is weird. Including you.)

The problem is that our trip took place RIGHT as stores were ramping up for Halloween. (Thanks for planning your wedding so close to Halloween, cousin!) And once I started covering Halloween stuff, when was I going to find time to show off the Marvel-themed pizzas that I found in the semi-frozen foods section?

Now. The answer is RIGHT NOW! 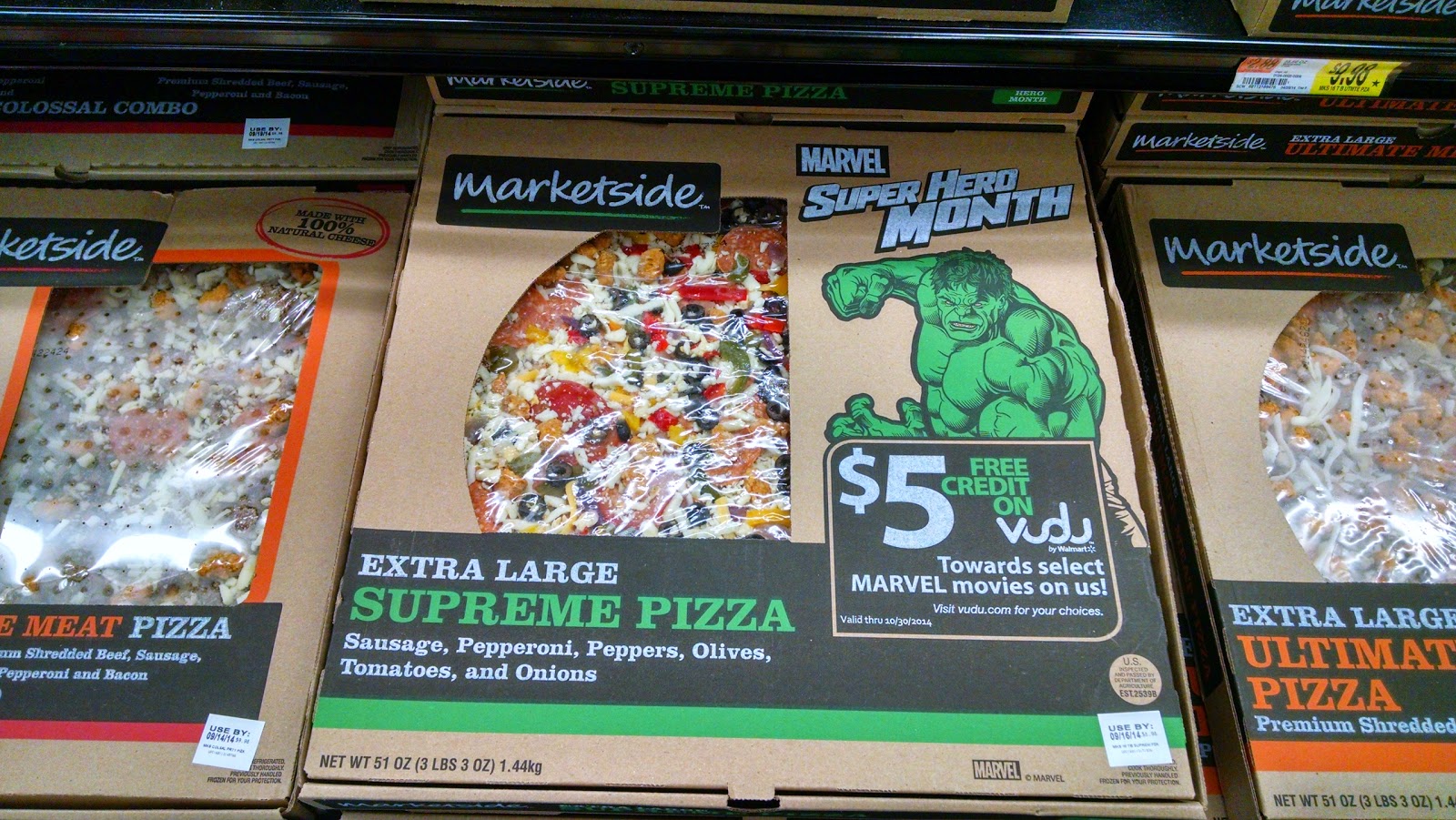 Trying REAL hard not to just go with "HULK SMASH PIZZA" as a caption and calling it a day, but the grim reality of this post, that I only see, now, after having already written so many words for it - and importing the images - is that there is not much to say about each box. Each is a box. With a Marvel character on it. Inside is a pizza. The toppings don't really reflect the character, to my knowledge.

There, I've stretched that out, for having nothing to say! JEFF SMASH KEYBOARD! 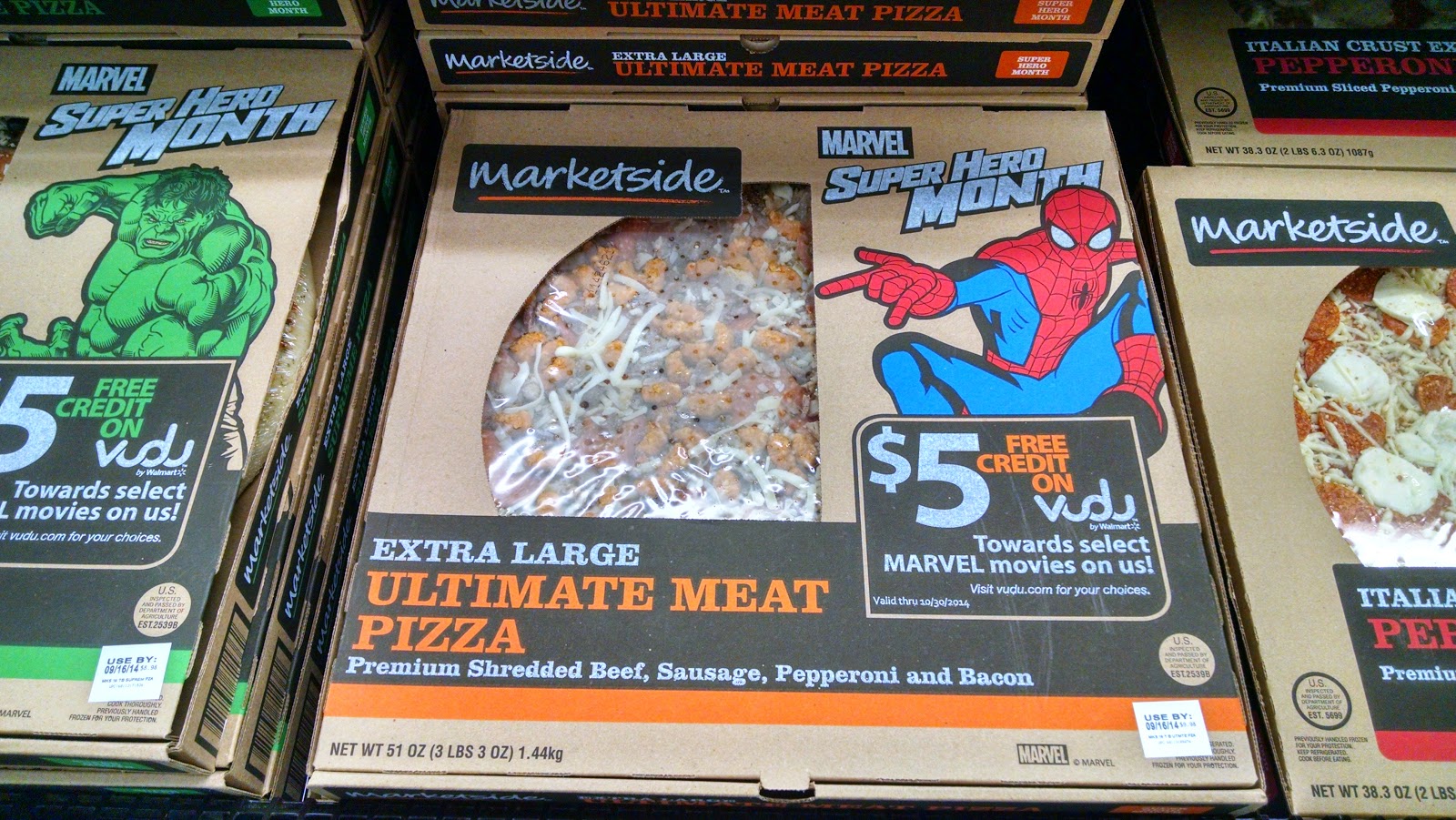 Take a moment to think about which super hero you'd be most likely to describe as "ultimate meat".
Wrong.
The correct answer is "Chris Pratt". (Am I RIGHT, ladies?!) 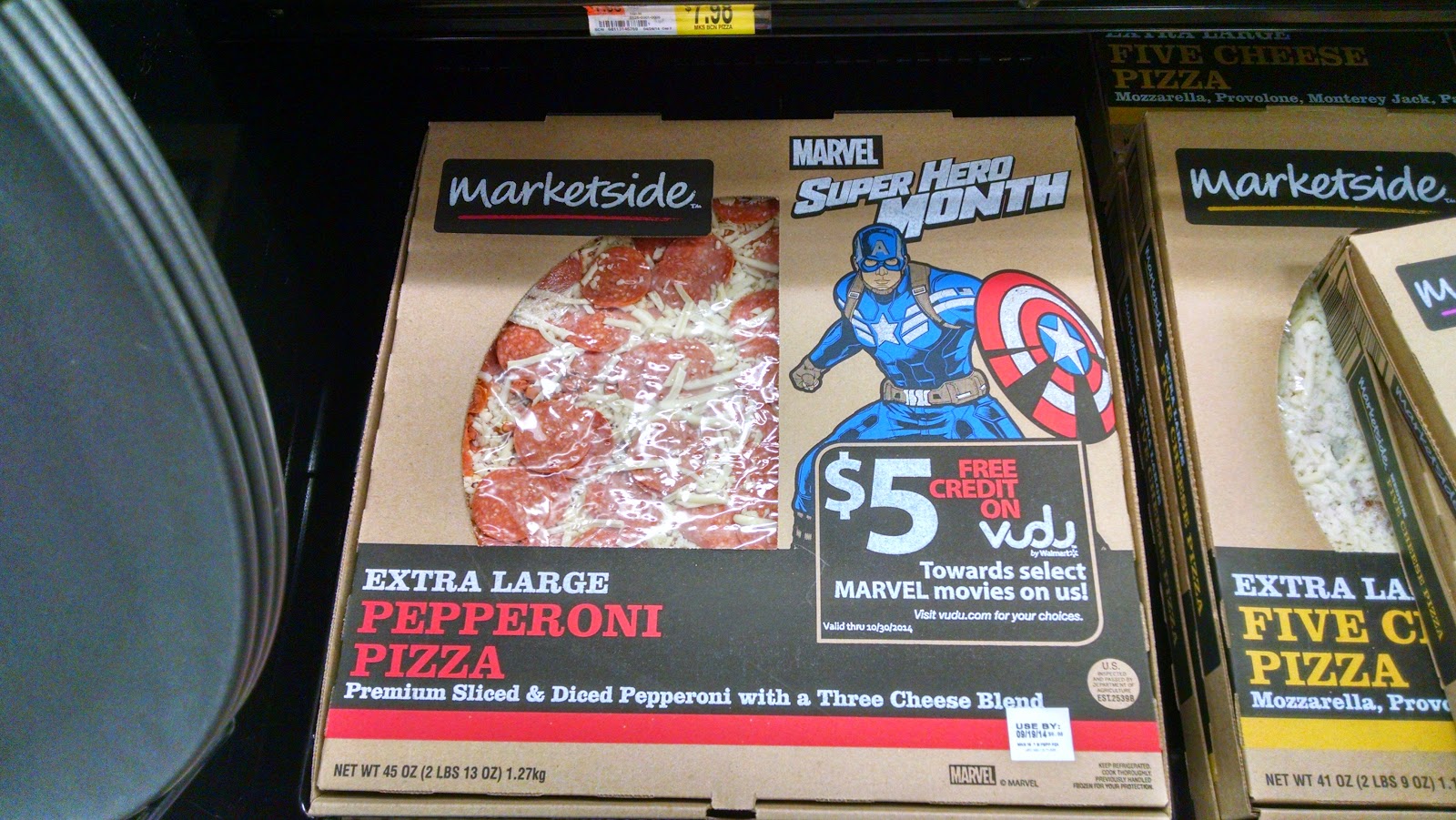 If I were more of a "vlogger", I'd have bought this one, so I could film a v-blog post titled "WHAT IF... Captain America's shield were a PIZZA?!" Would it get mad views on YouTube? Only Uatu knows that answer, but wasting food is a sin (unless the video is REALLY funny).

<sings>When Captain America throws his mighty pizza / All those who chose to oppose his shield must yield ... izza! 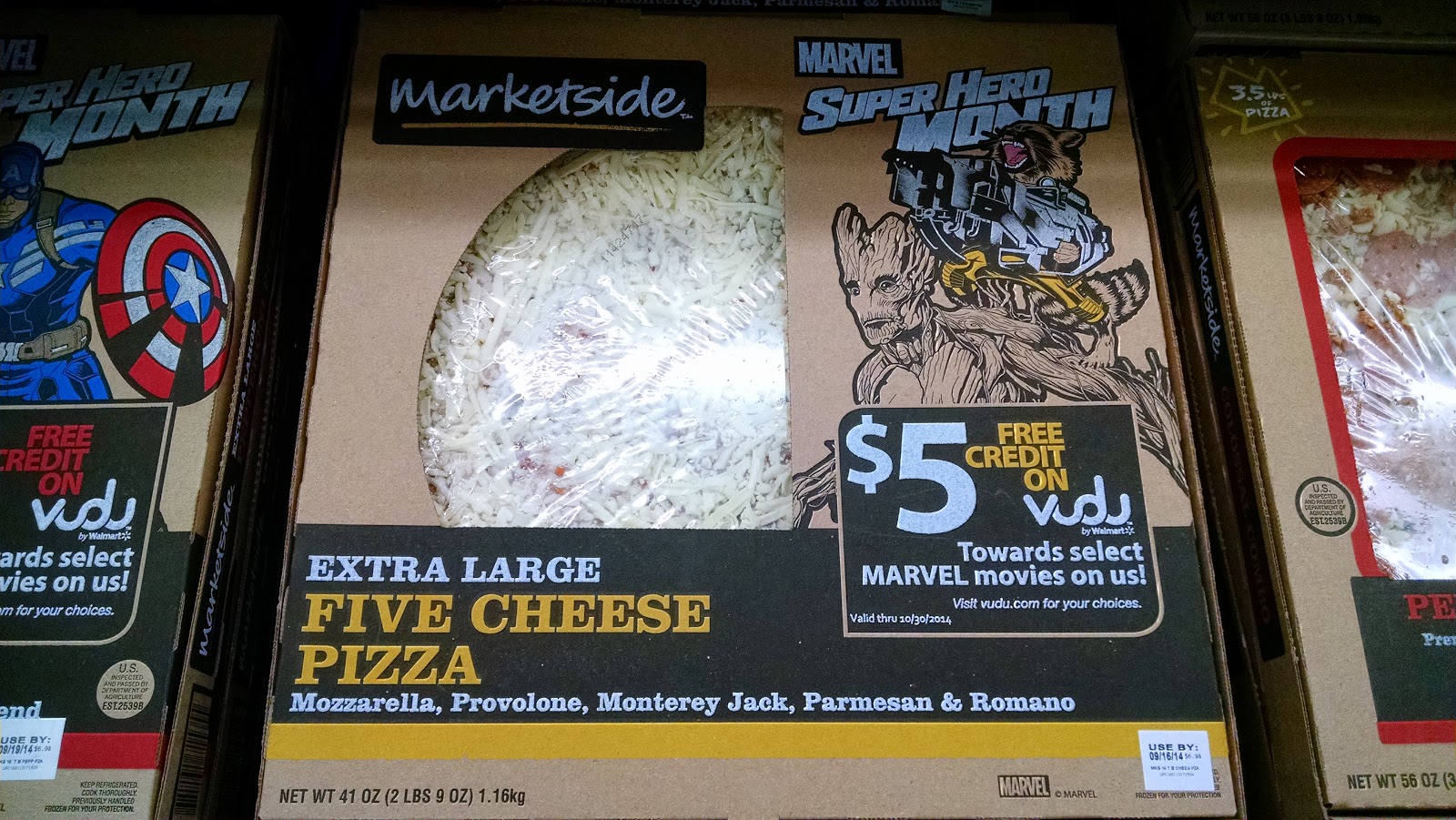 This is, really, the only pizza tie-in that made sense at the time, since Guardians of the Galaxy was BLOWING UP at the theaters. (Cast your mind back to the time when we were all non-ironically listening to "Escape (The Pina Collada Song"! What a time!) That's Groot and Rocket on there, and I'd wager that Marketside Foods Inc is REALLY hoping you don't associate bark and raccoon hair with the pizza you're about to purchase and eat! Maybe that's why they were selected as the mascots for the plain cheese: So that you wouldn't think any topping bits were droppings.


Again, to many of you, there is nothing wondrous about seeing these pizza boxes, as you see them every god damn time you go to Walmart because your god damn kids won't stop whining that they want to god damn eat frozen pizza for dinner. This post is not for you. This post is for me - and those like me - whose bank accounts refuse to grow large enough to buy a car ... or who don't live in the greatest city in the world, New York City.

I can be followed on Twitter @sommerjam! DO IT! DO IT NOW!!!