Dollar stores are great places to look for weird Halloween stuff. It's all generic and probably full of lead ... but in a fun way. I never wind up buying anything, but it's fun to look. UNTIL NOW!

I found something amazing and amazingly useless: Leaf bags, in the shape of pumpkins! 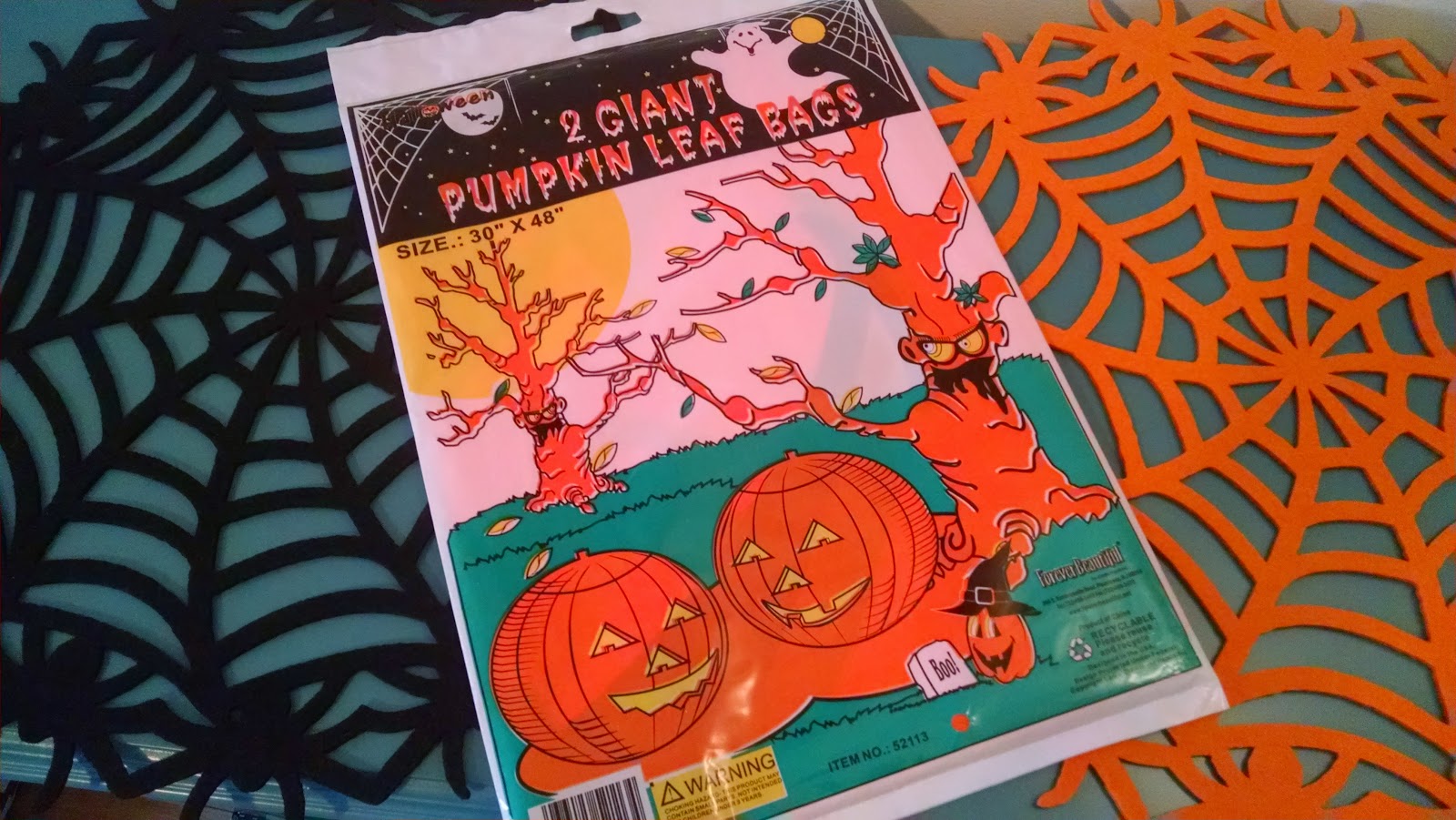 There is no reason for me or my beautiful wife to buy leaf bags. We don't own a tree. We might never own a tree, if we keep renting ... but that's a discussion for another time. I'm just pretty sure that it will at least a few years before we have a need for leaf bags.

But holy cats, look at the design of this bag! 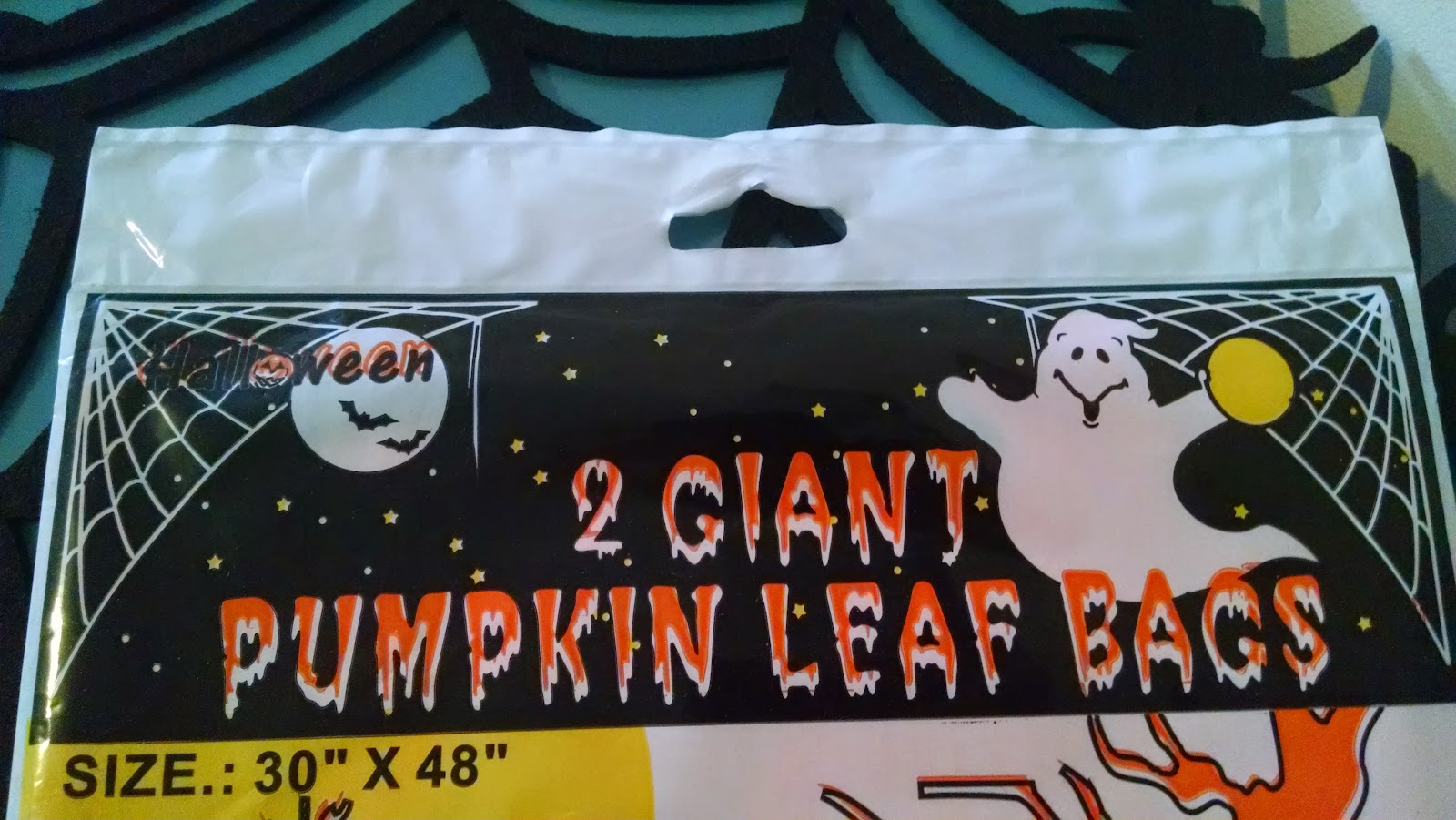 I will ignore the fact that they started the name with a numeral "2" and not the word "two", because the rest of the bag makes up for that one faux pas. Firstly, the font is perfect. It's the font that ALL of us "nostalgia bloggers" hunt down during our first year covering the Halloween beat. (The one I have is called "MATTER OF FACT", for some reason, which makes it hard to track down in my font list the first time I need to use it, each year. Why isn't it called "Spooky Town" or something?!) 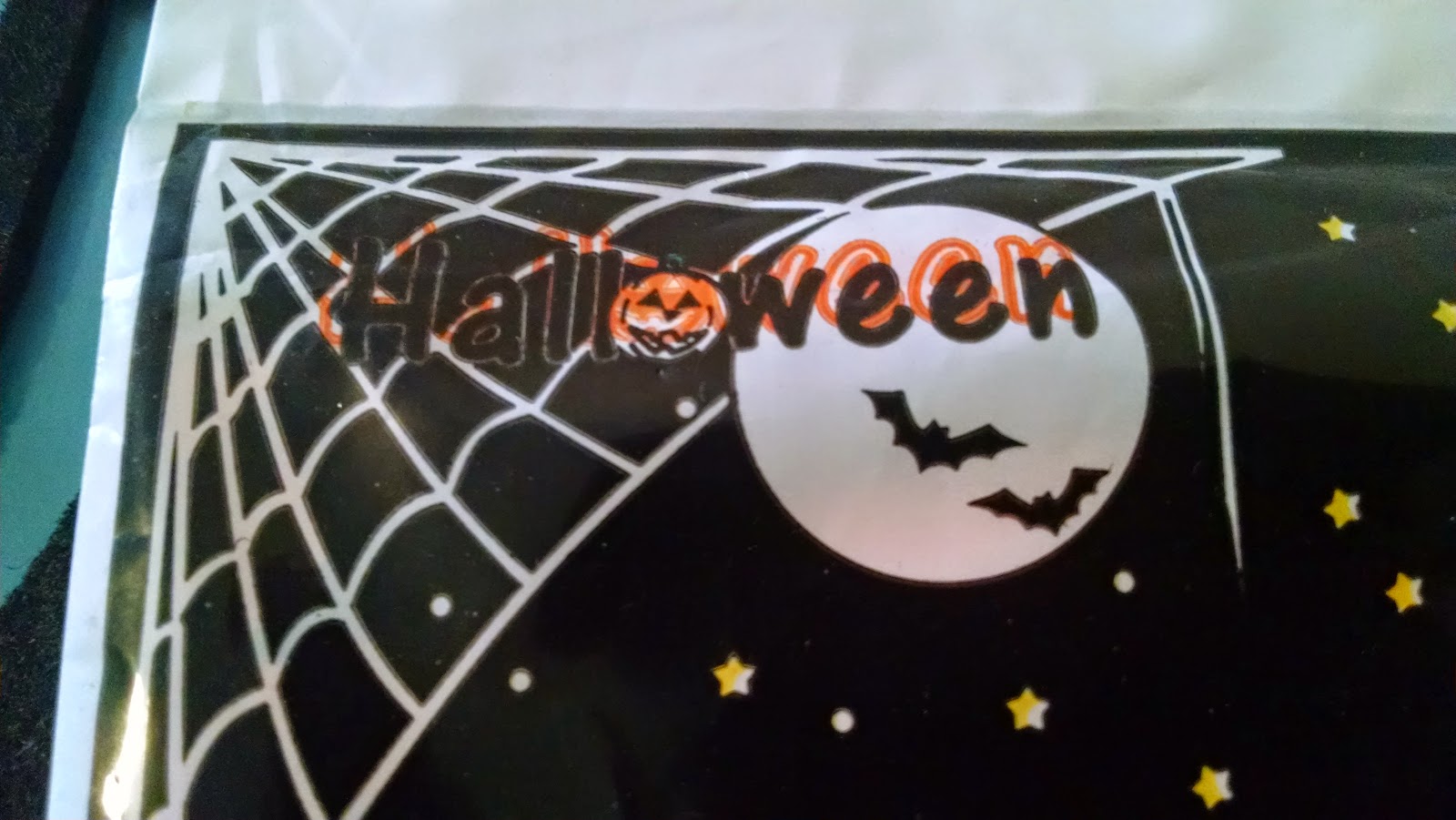 As if you didn't know this is a product for Halloween. The manufacturer wants to make that clear. This is also helpful in separating this product from all those Easter leaf bags. 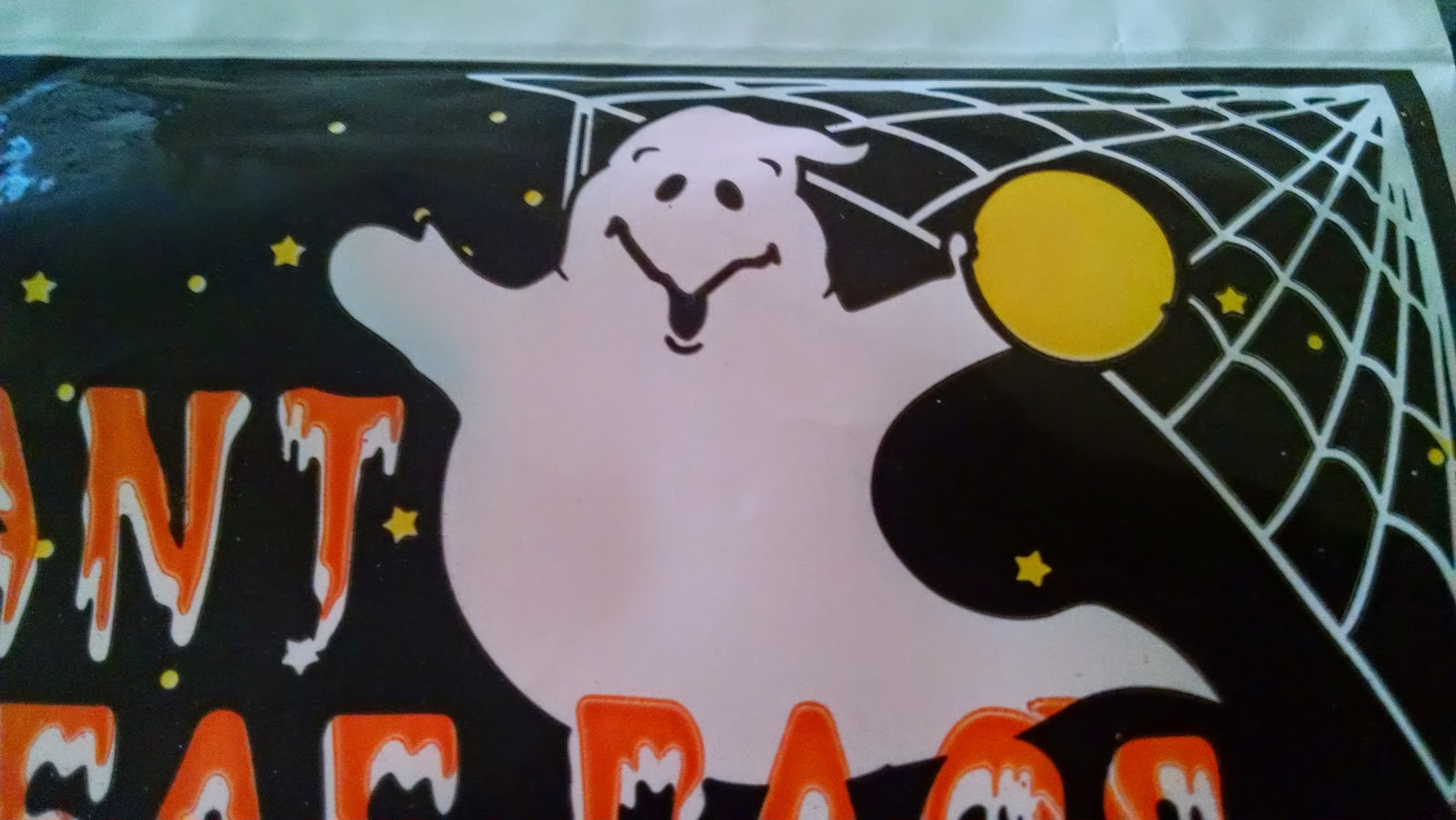 Whatever's happening, none of it's good. It's the end of days. Curl up inside your leaf bags and pray that saves you from Tambourine-Moon Ghost's wrath. 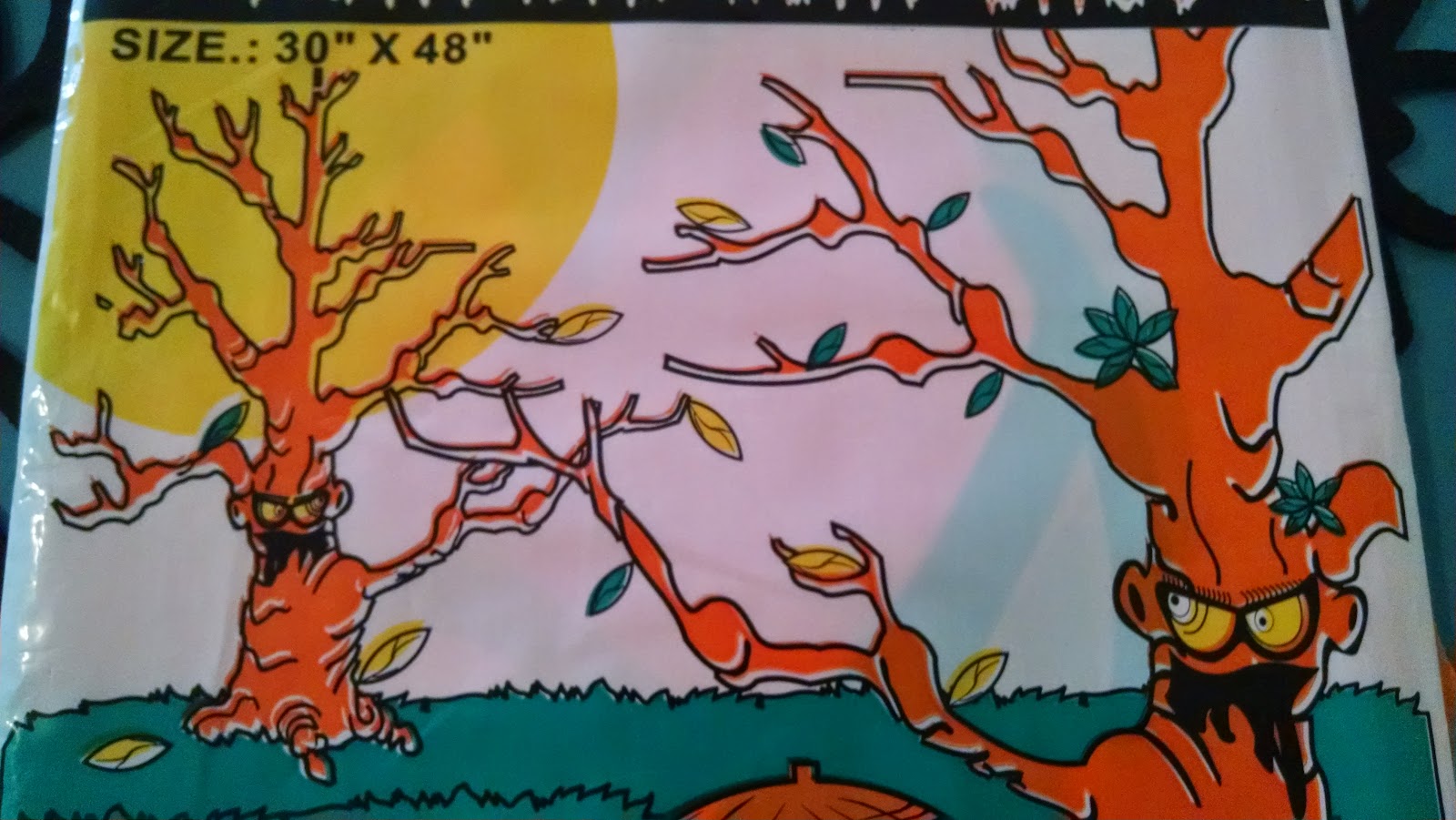 Better still, this bag has Complaining Trees! Man, these guys REALLY hate each other and bicker all the time. The sad circumstances of their rooted-to-the-ground tree lives means they are stuck in a terrible situation. Forever. 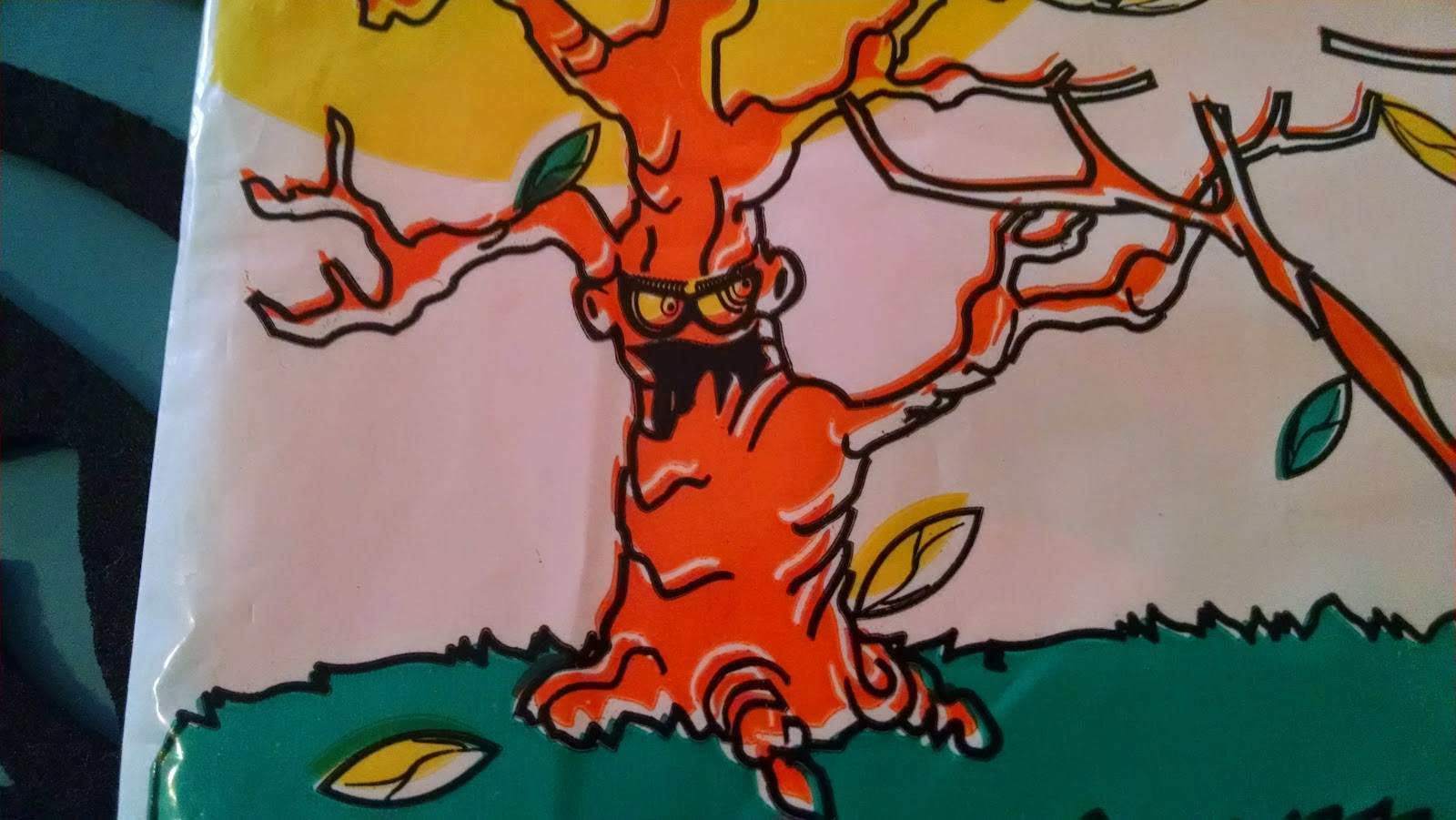 If you think of the branches as arms, it looks like this on'e all "AH SHADDUP, YA CRAZY OLD KOOT!" 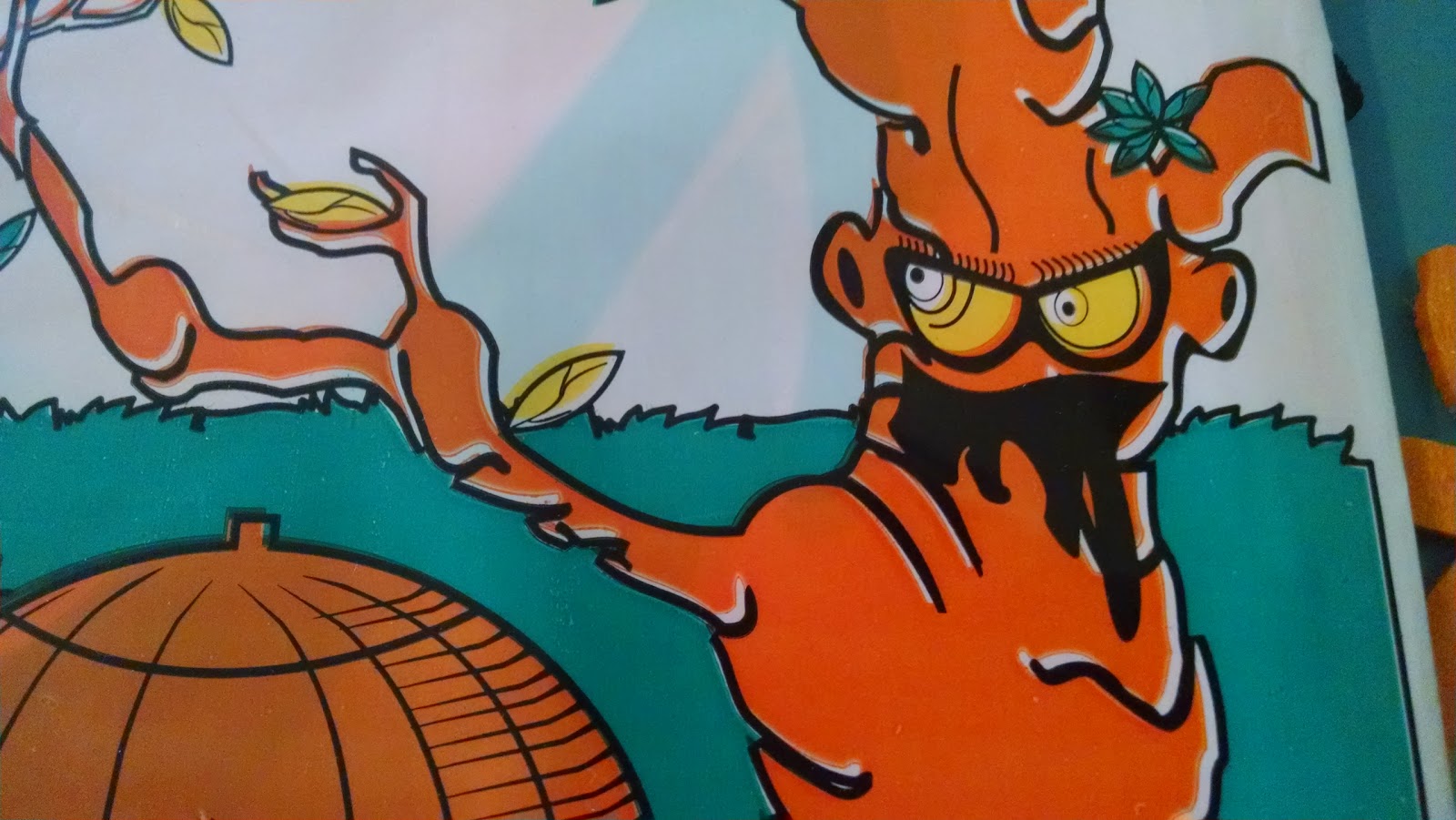 And this one is like, "BAH!" (Because he's not good with witty rejoinders.)

Why can't they just put aside their differences and realize how similar they are?
(This is an allegory. Try, each day, to be less like these Complaining Trees.) 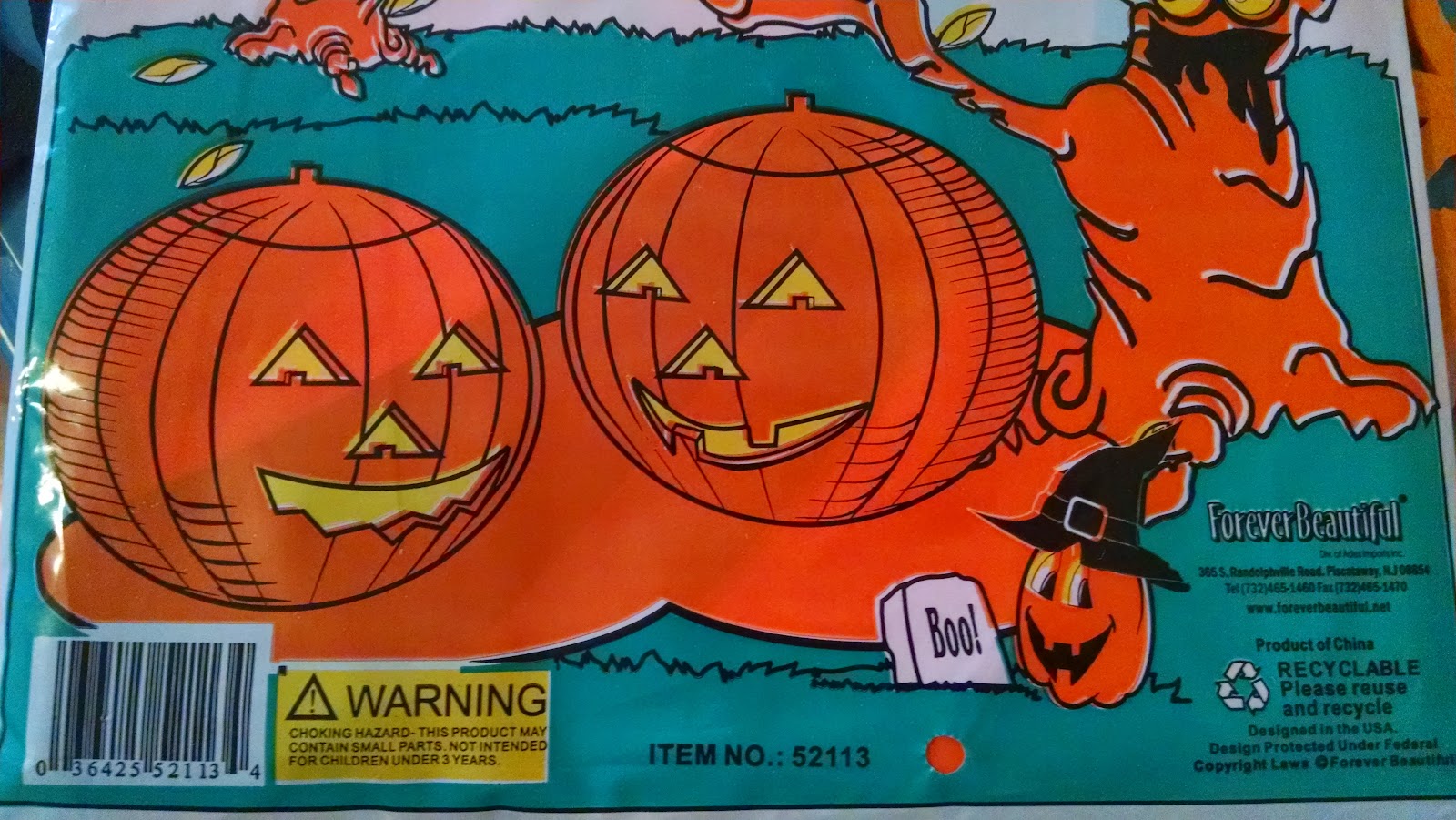 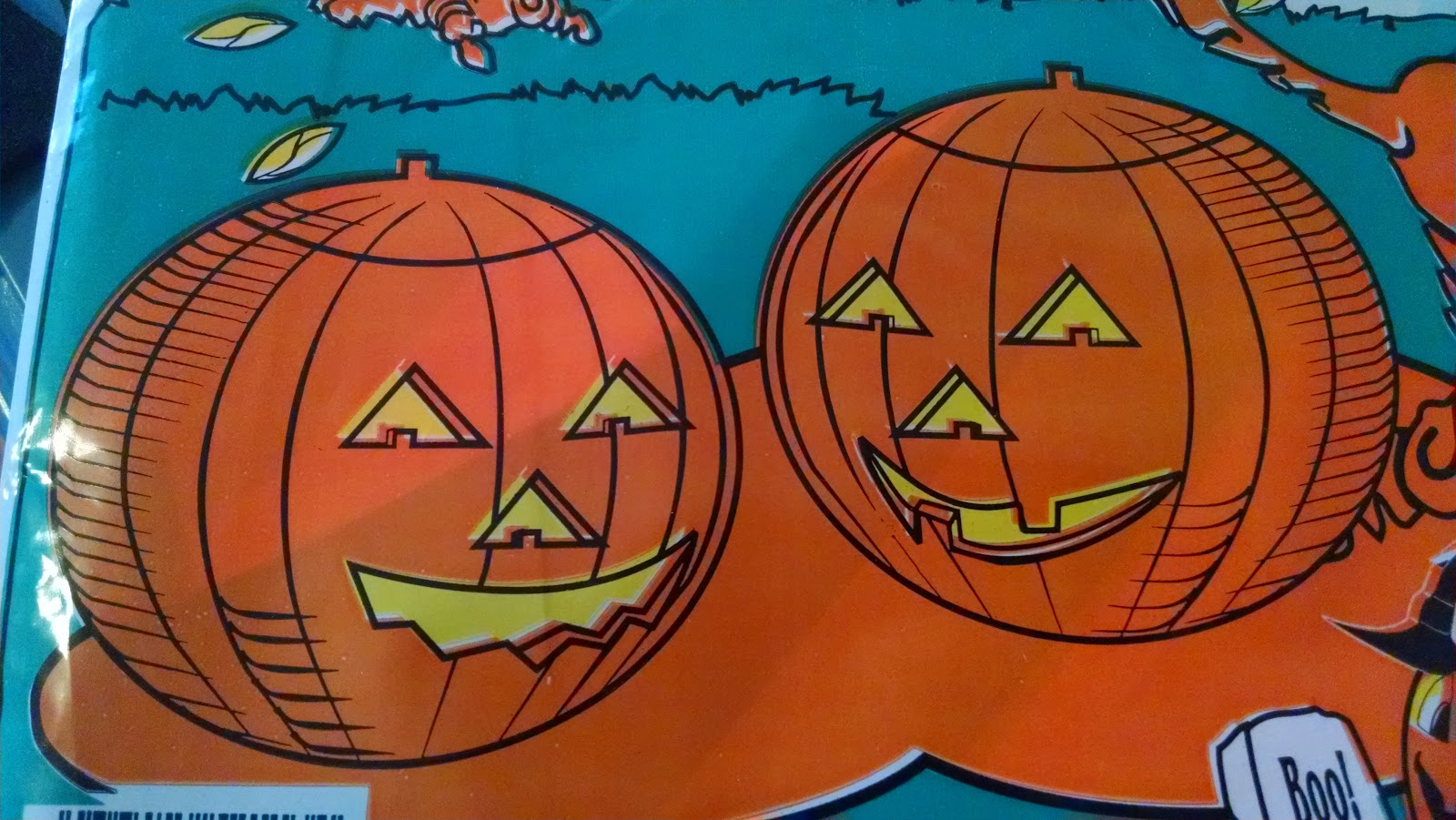 The disclaimer that is needed, however, is one that says, "No matter how many leaves you put into each bag, they will never look as round as this". Leaves just don't lend themselves to "round". At best, your full bags will be lumpy and misshapen ... and then blow away with the first stiff October breeze.

Worse? Most homeowners won't even be able to throw these leaf bags out, at the end of the season, what with municipal laws stipulating that trash men can only pick up leaves that are in those special brown, recyclable bags. A new Halloween tradition that many kids will grow to hate will be the annual "un-bagging of the wet, rotting leaves from the pumpkin bags and re-loading them into the city-approved ones".
"Watch out for mice and slugs, kids!"
"Hooray!" 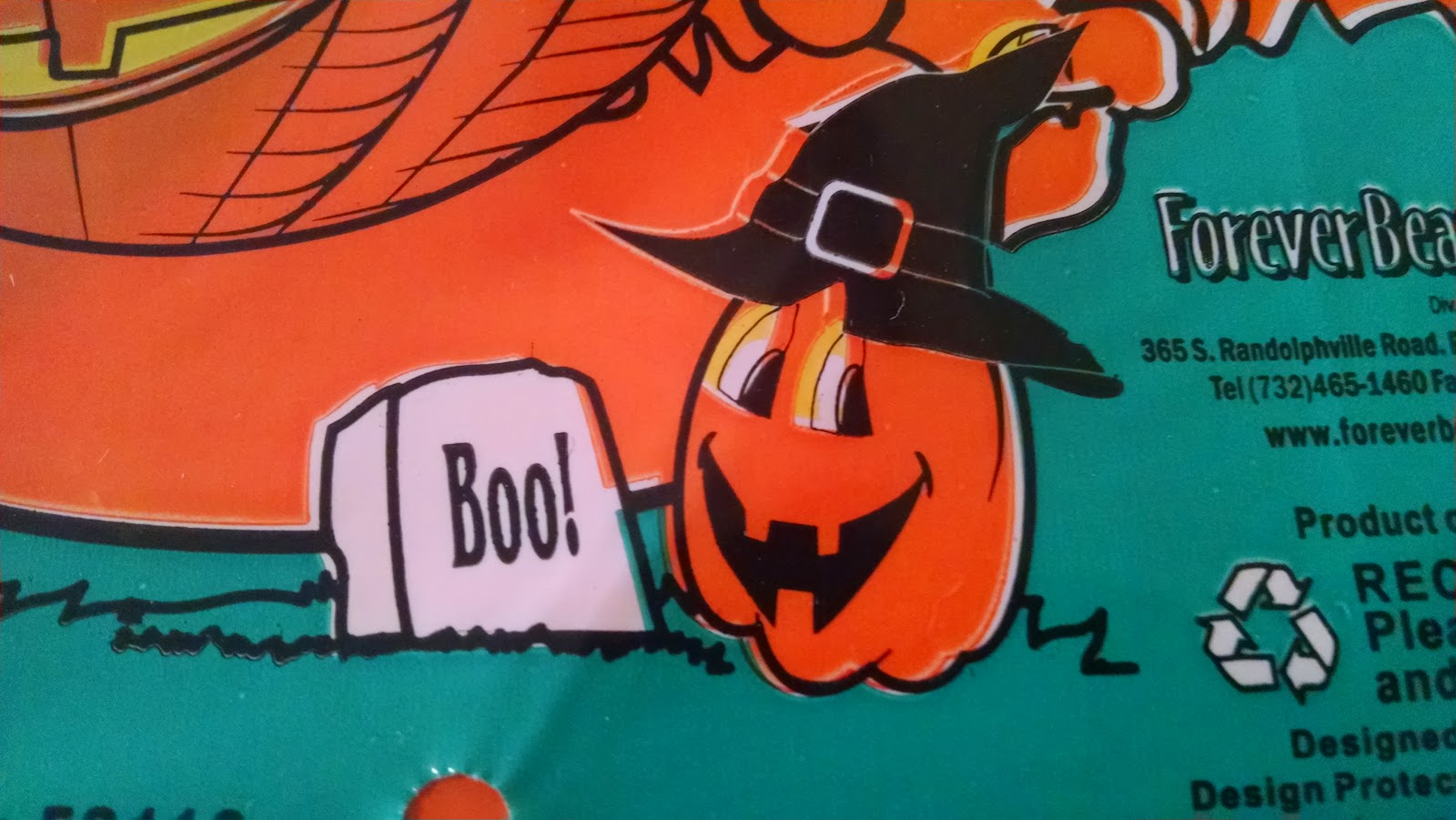 Look, I wrote all that other crap, above, because I wanted to be able to share this one image. Happy Witch-O-Lantern, standing on her own grave. The grave is inscribed "BOO!", because the government didn't want Witch-O-Lantern's grave to become a site of pilgrimage. If I was 10 years younger, this would have been my very next tattoo. Instead, I will just admire the image, like a grown-up. A sad, joy-less, no-fun grown-up.

ANYWAY! Can you believe all that art cost only a dollar? (Well, a dollar and eight cents, because the tax man is watching your Halloween purchases.) I want to frame it. I want to spend thirty times as much as it cost on that frame, in fact. A giant gilt job, with filigree and fluting. I hope I used those words correctly. This is art, people. Art put onto a plastic wrapper that the consumer was meant to rip open and throw away. Travesty!

I can't imagine many people buying this for the leaf bags inside, though. 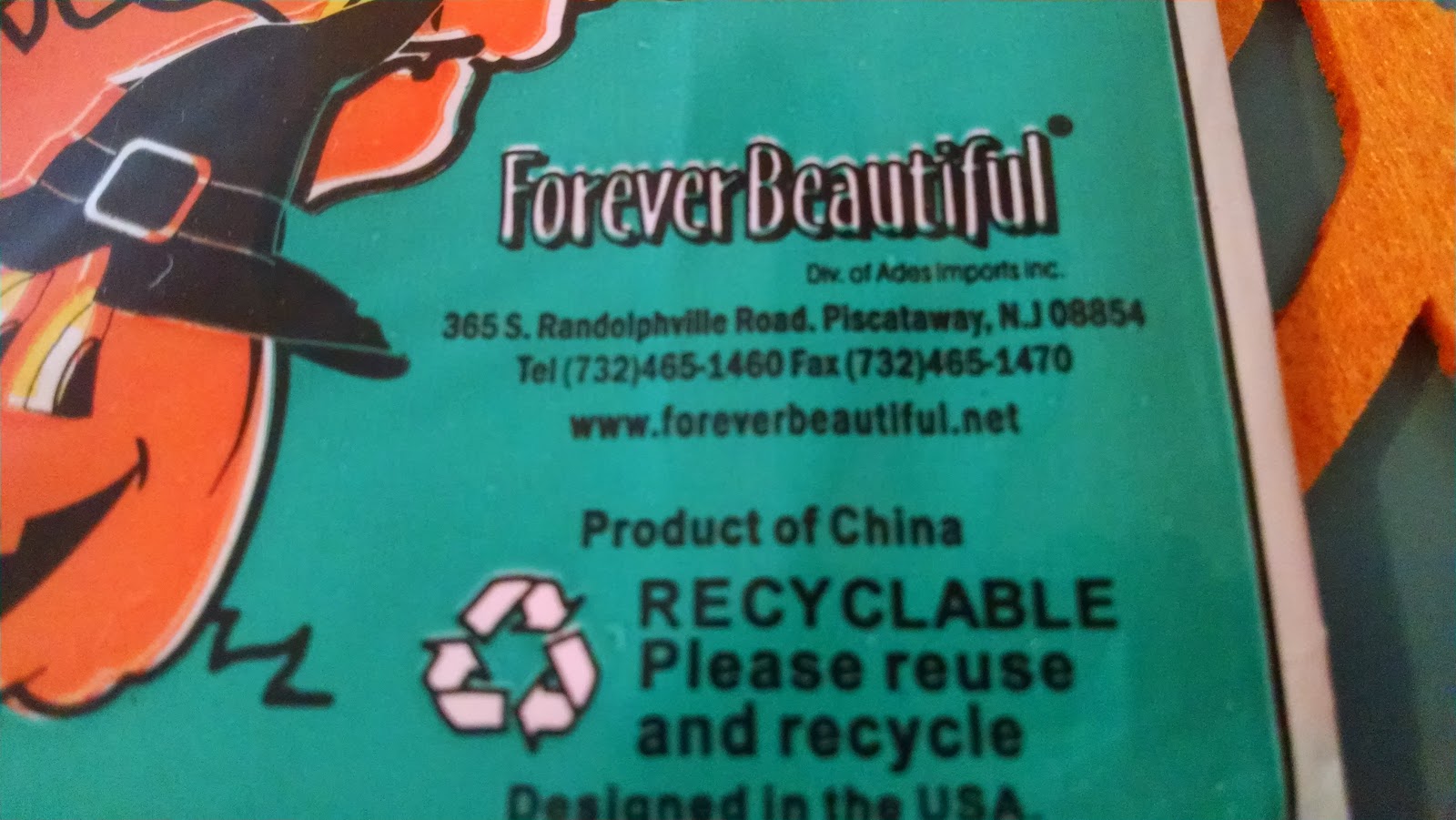 Sad post-script: Don't bother visiting that website, it's a "Bad Request".
I didn't call them, because I wouldn't know what to say? Plus: Never meet your heroes, right?
I didn't fax them, either, because it's god damn 2014 and who faxes anymore?!


I can be followed on Twitter @sommerjam. DO IT NOW!!!