Driving down some road in Michigan, I saw a sign for Dollar Tree. Off-handedly, I said, "I'll bet they have some good Halloween stuff." I felt the car swerve as my wife, who was driving at the time, jerked the wheel, pulling us into the parking lot entrance that we were just about to pass. This is why I love her and will be with her forever. So that's the advice I'd give young lovers: Will this person swerve dangerously to get you to a Halloween store? Ask yourself that question, before buying a ring. 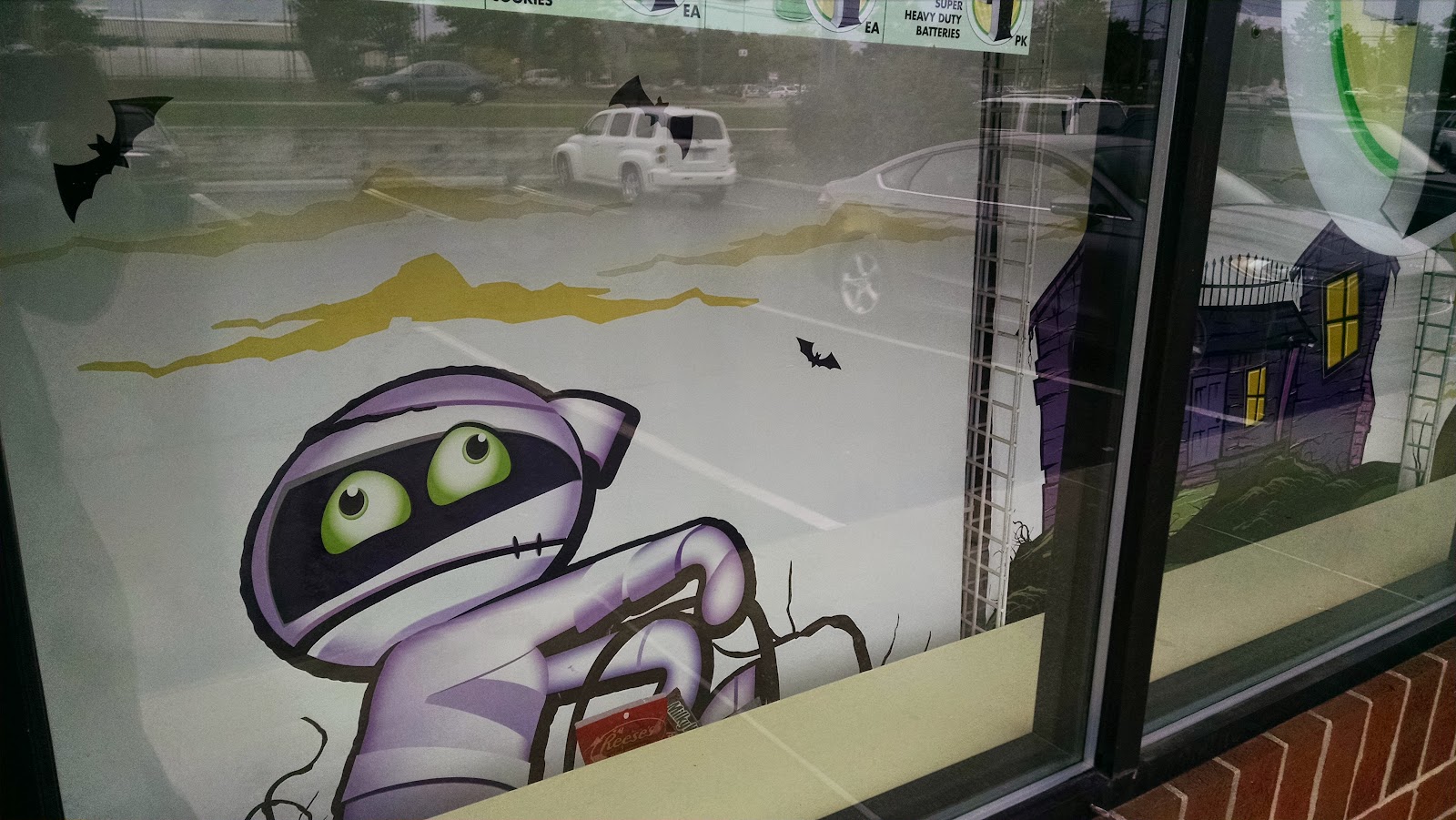 I didn't know how serious this trip was going to be until I saw the posters in the window. Not only is that mummy super-boss, rockin' the old-school "hands-out, wrists-limp" pose that went out of favor when zombies appropriated it, but then there was the OTHER poster: 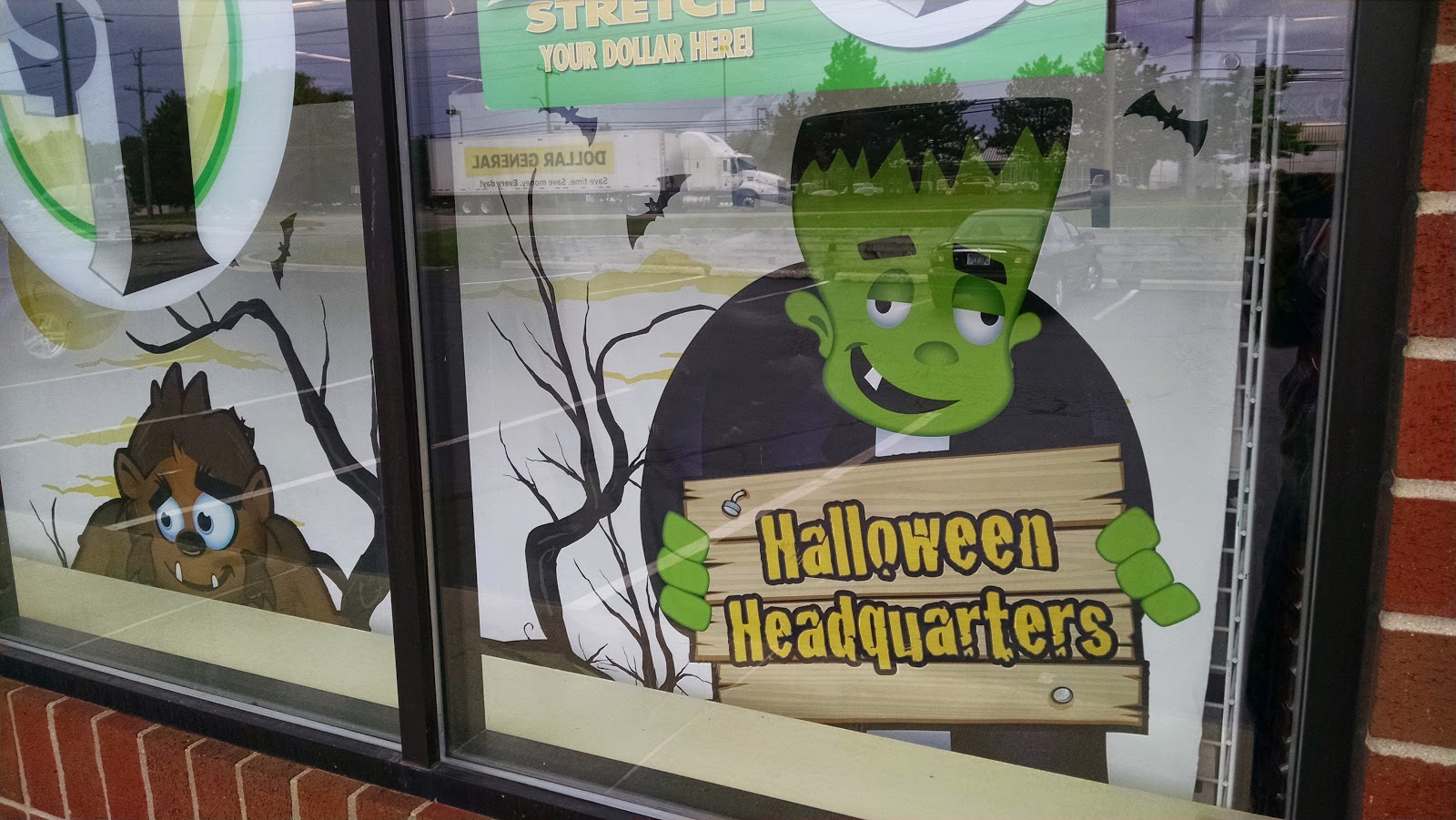 Holy. Crap. I found the Halloween Headquarters, guys! This is where all of Halloween's biggest decisions are made. Are vampires cool again, this year? Should ninjas be more of "a thing" in 2014? The fat-cats who covertly run Big Halloween do it all from here! I'm surprised they let us in without a pat-down. 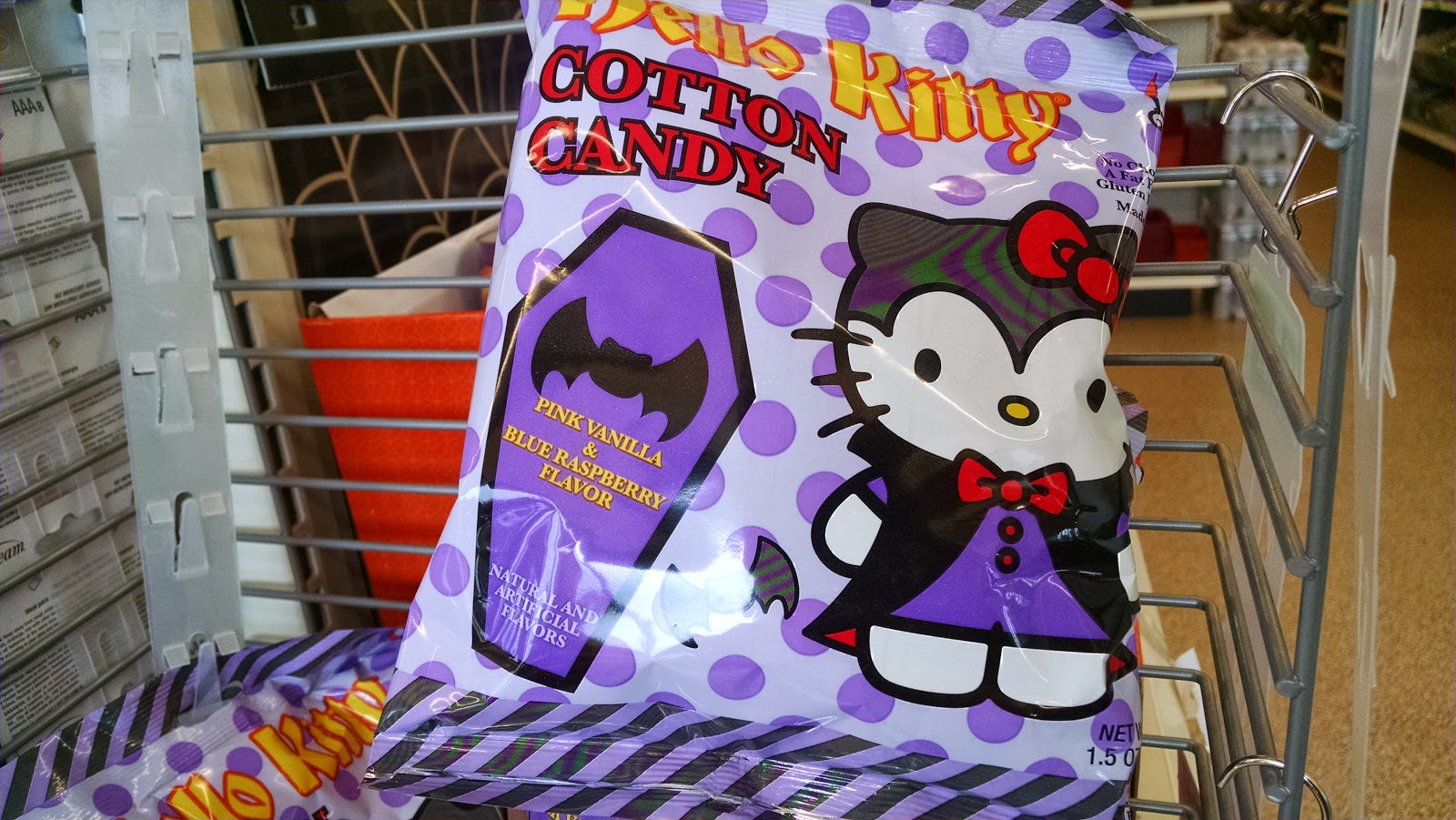 So cute it almost made me break my "never eat anything from a dollar store" rule. But rules are not meant to be broken. That's why they are rules. (And that's why, in my world, Santa drives a sliegh with ieght tiny riendeer.) So, I'll never know what that cotton kitty tastes like. Probably asbestos. 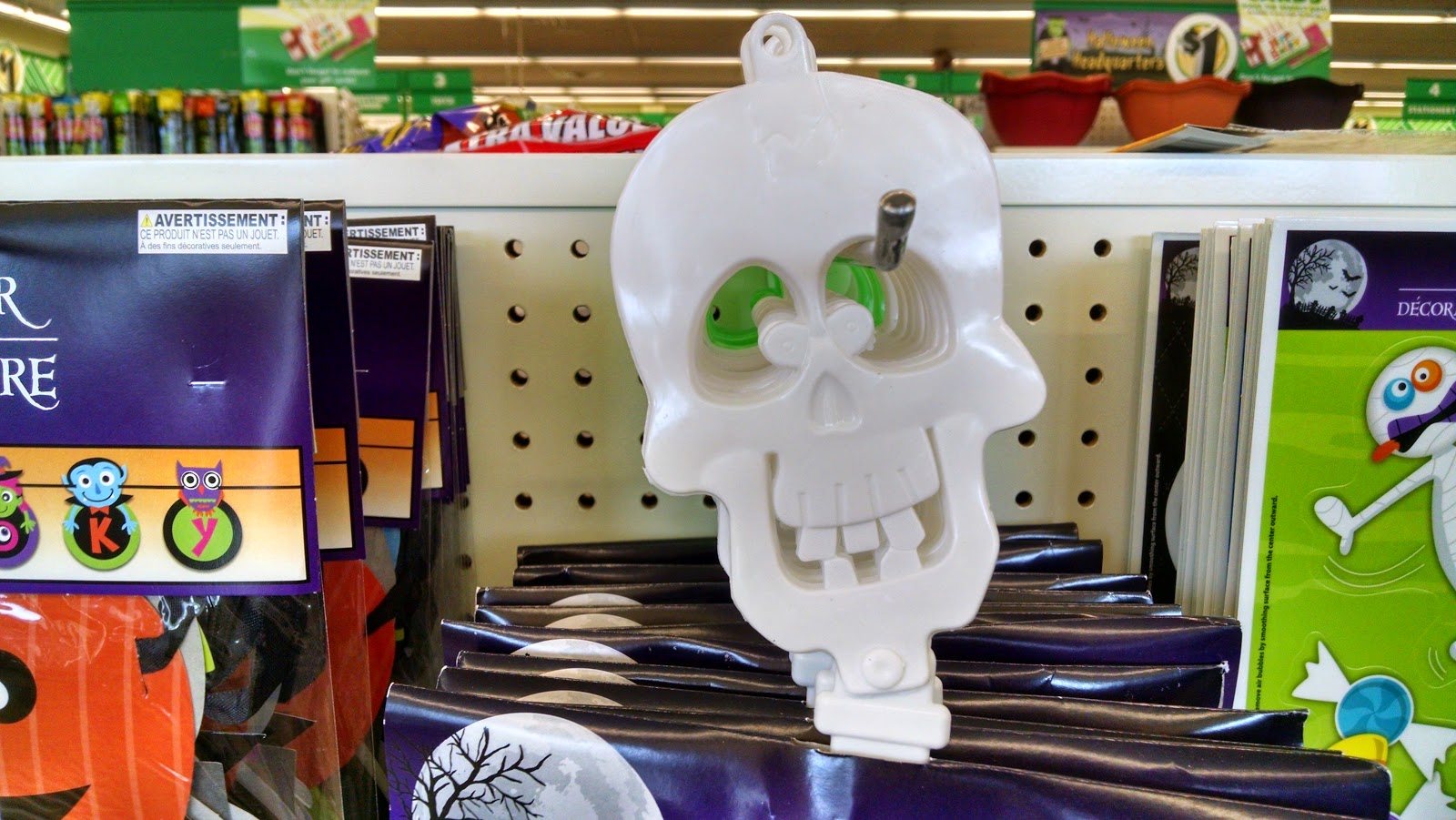 The way they hung this guy up is just humiliating. You live your life. You die. And the level of respect that you are afforded is being hung up by your eye socket? No, sir. I hope I get more than that, after I pass on, next week, under mysterious circumstances. (Though, I have requested to be cremated, so ... just you TRY hanging my dead body on a peg hook! I WIN!) 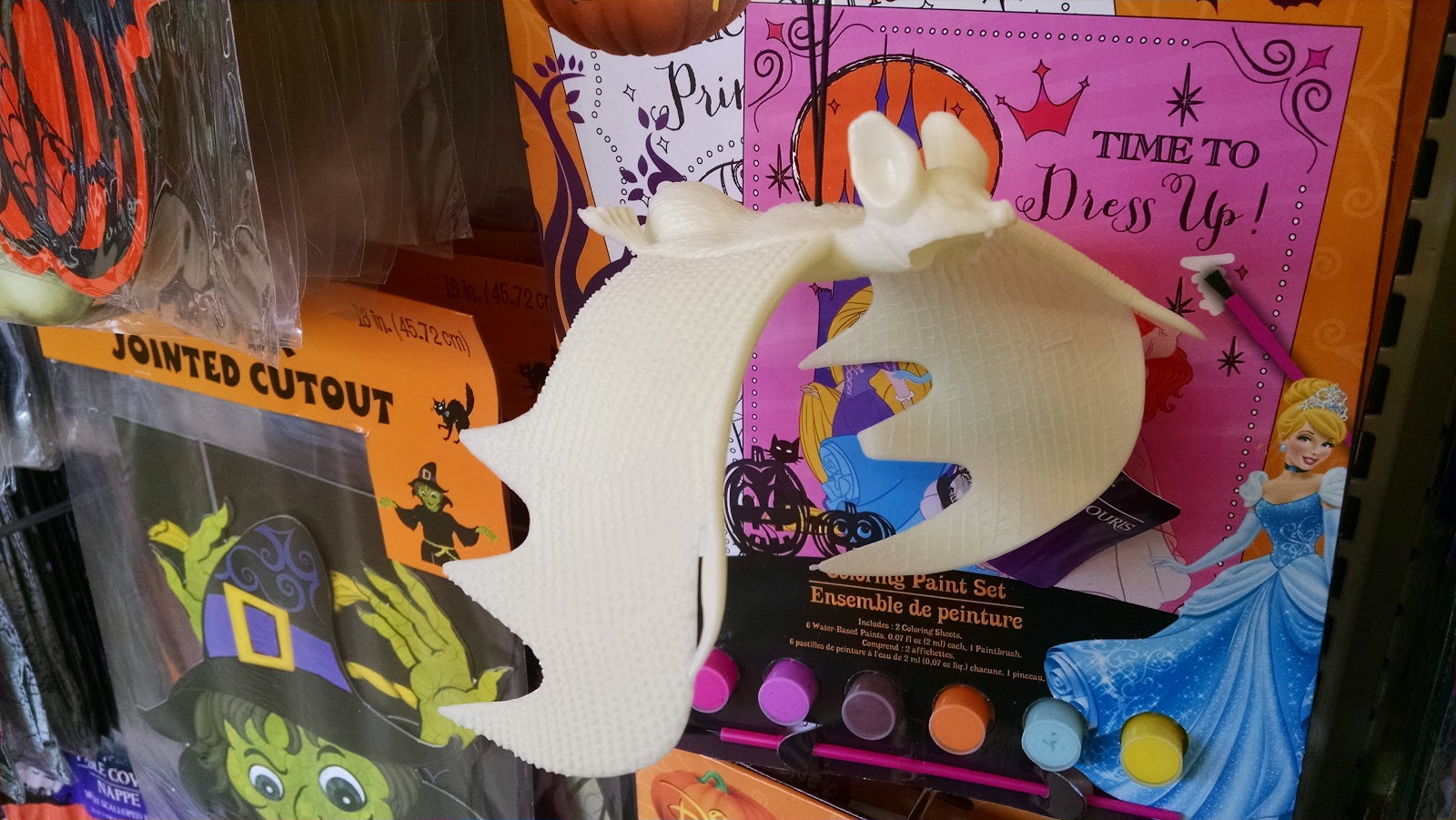 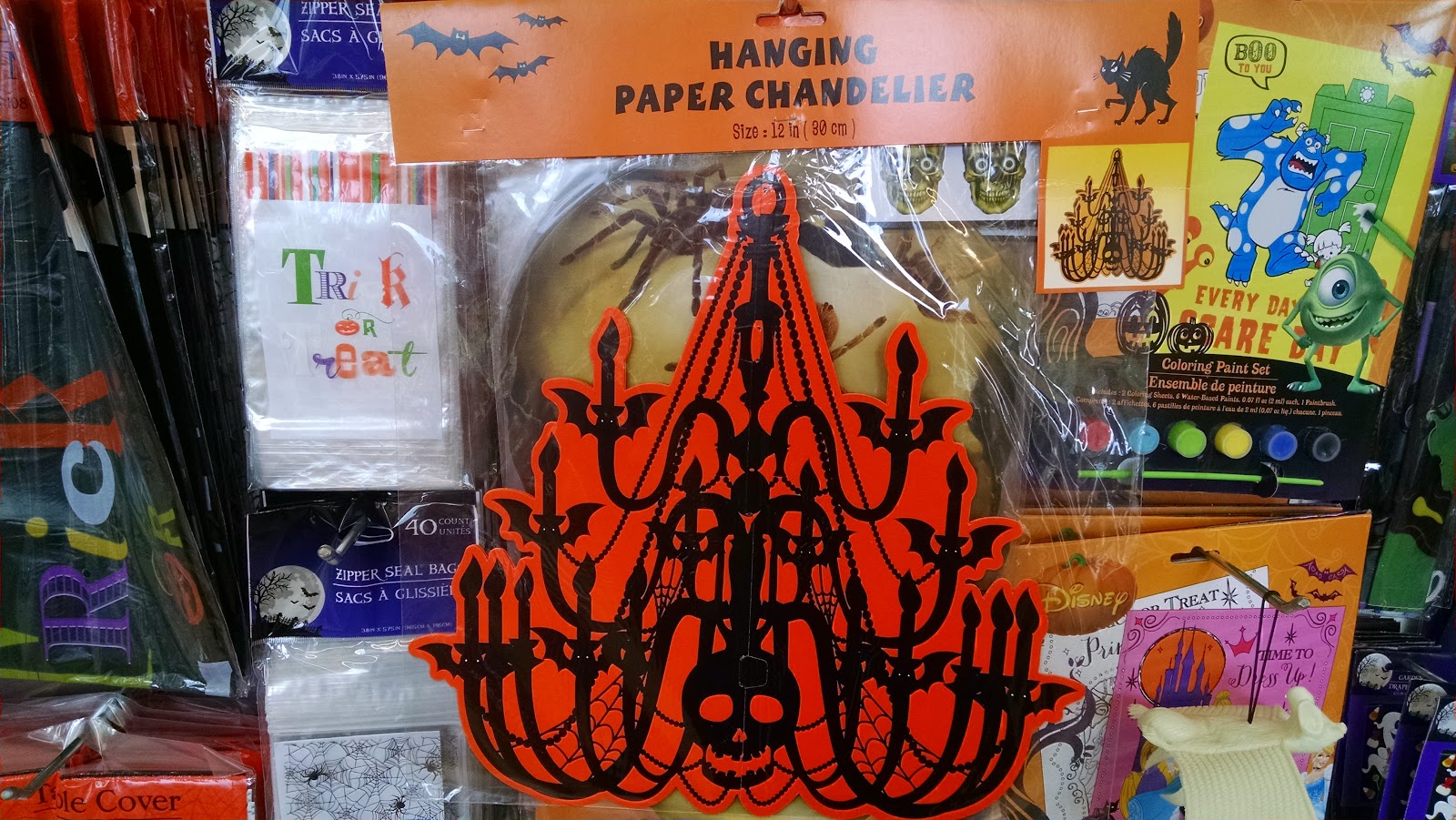 Paper decorations will forever mean Halloween to me. Growing up, we had paper cut-outs for every holiday and season, and I used to LOVE taping them up all over the house and on the windows. Even better were those paper ones that had the crepe paper accordion stuff attached. The stuff that let you, say, open up the bat and it'd have a fat little paper belly. Or open up the bit that turns into a stand and, viola, a turkey centerpiece for Thanksgiving! This paper chandelier is somewhere in between. a 2D decoration with 3D dreams. Don't stop believin'! 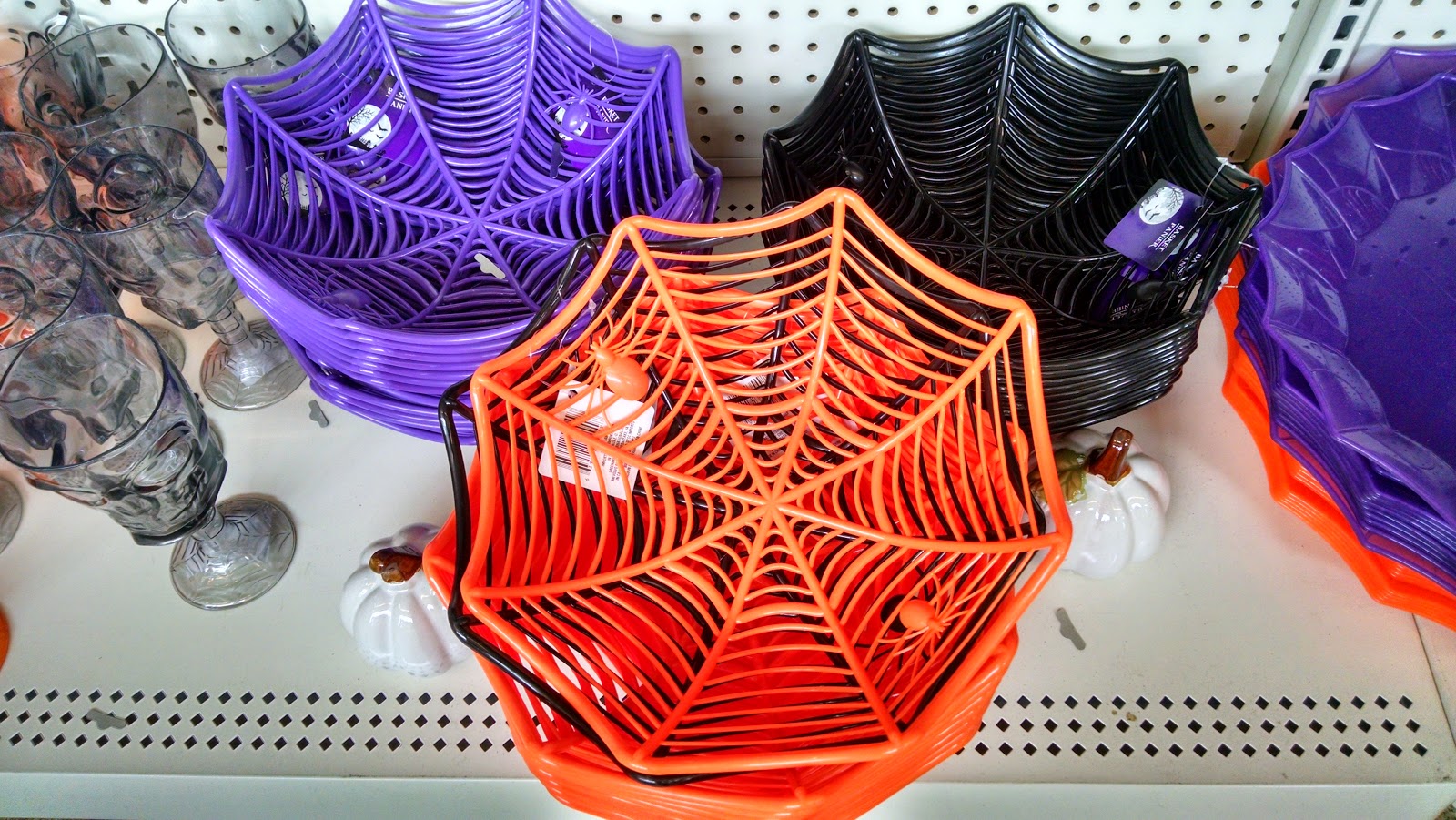 When did purple become the official third color of Halloween? I'm not knocking it, I like it!. I just don't remember purple being in the color wheel of the holiday, when I was a kid. Well, if it's a new trend, then these spider web baskets are ON POINT. Who has this year's Halloween Look Book? 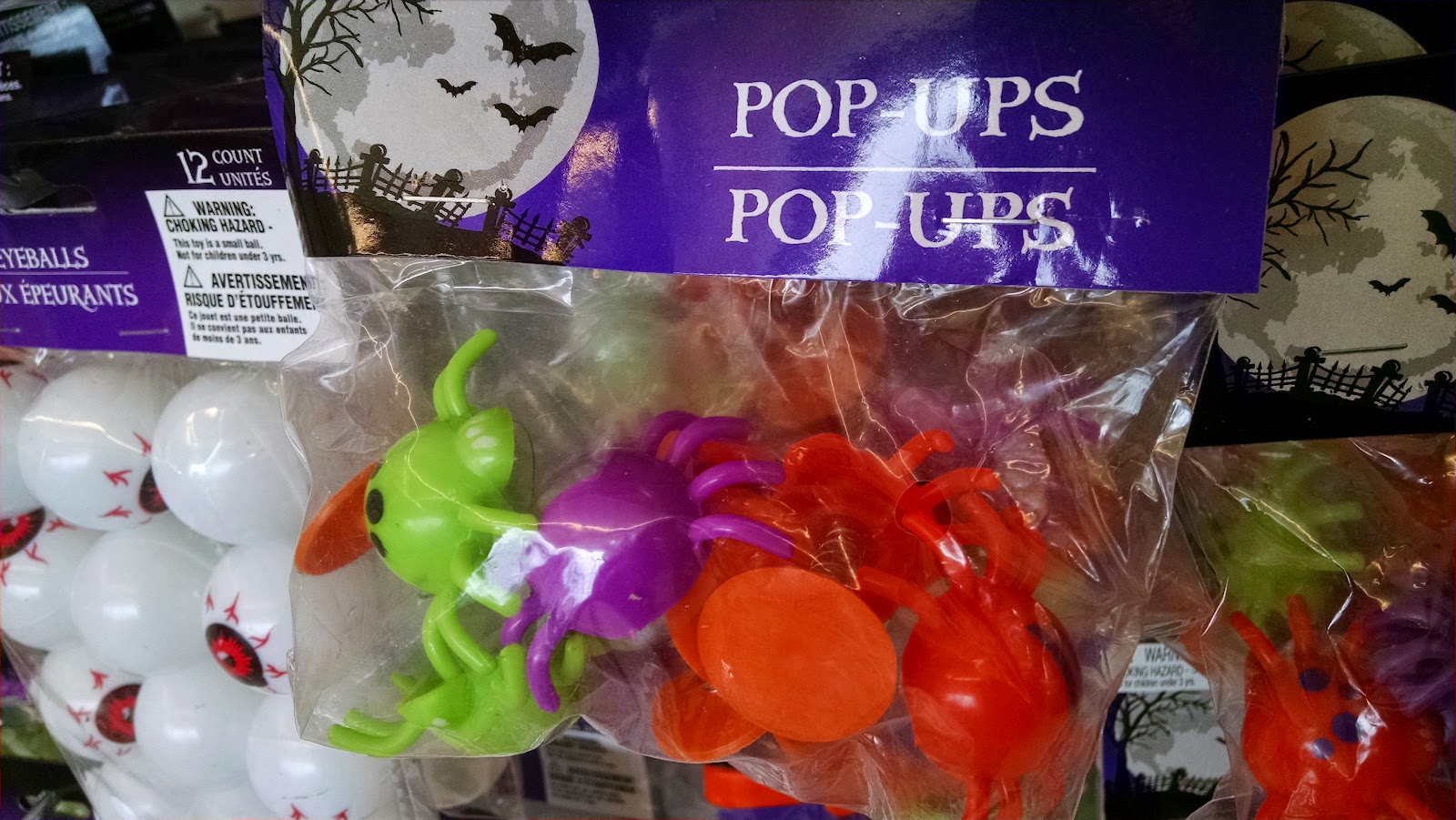 Ah, see, now now now!!! In there is a green Spider Pop-Up and I guess I always thought green was the "alternate color" of Halloween. What with it being the color of witches, ooze, puss, and really old Halloween candy. Oh, and these things have a suction-cup-and-spring combination that lets you push 'em down, then they pop up, when you least expect it (often that means immediately, while your face is still over them and they "pop" into your eye. But then you get to wear an eye patch, like a pirate, so your Halloween costume choice is an easy one, that year.) 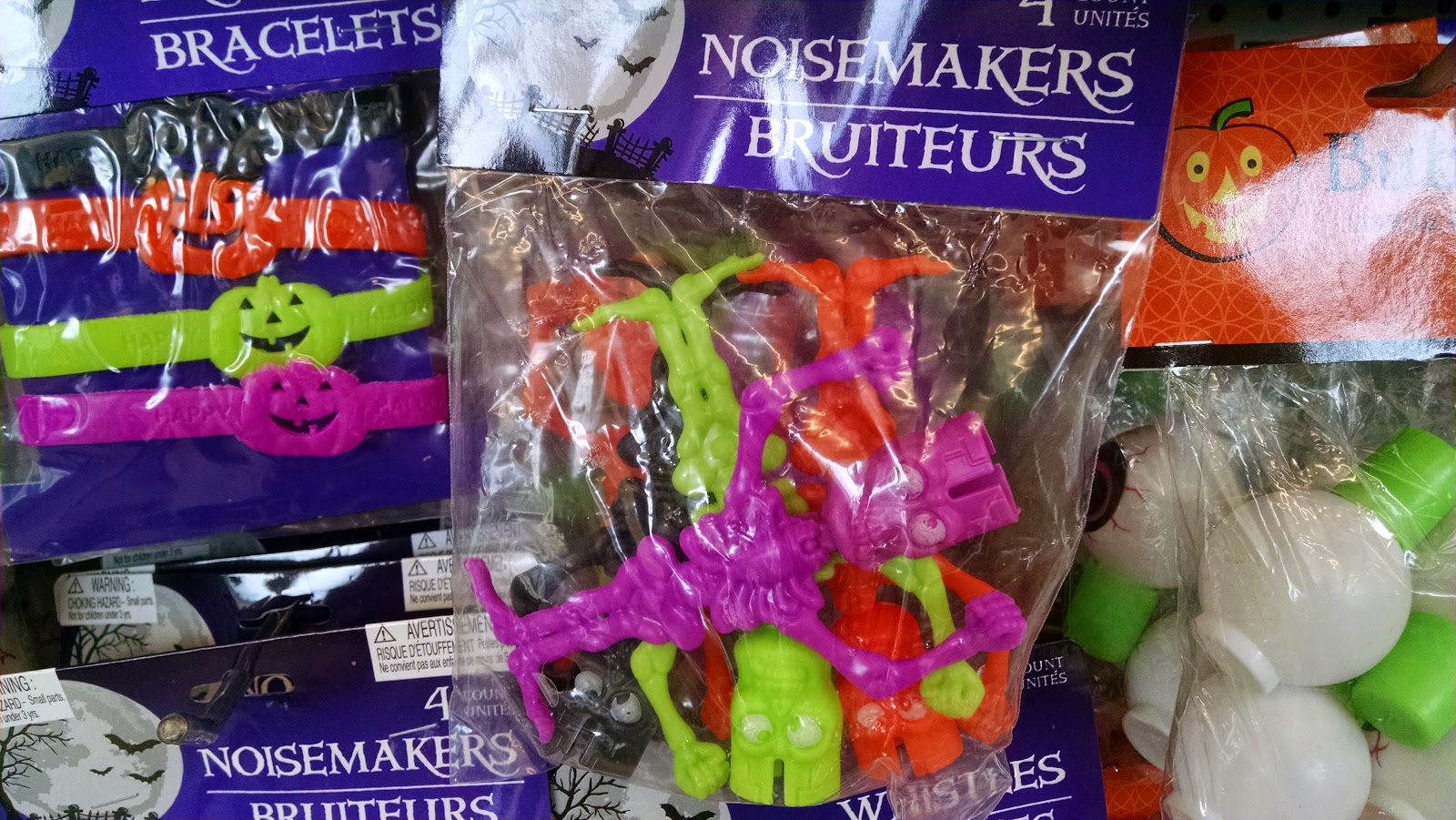 I originally took this photo to show off the Skeleton Noisemakers. (Shake them and they beat themselves on the head, making a plastic-y clacking noise), but I'm more interested in the bracelets, off to the left. I totally didn't notice them, at the time. In my dreams, these are holistic bracelets that give you additional energy to celebrate Halloween; like Powerbands, but something that actually works. 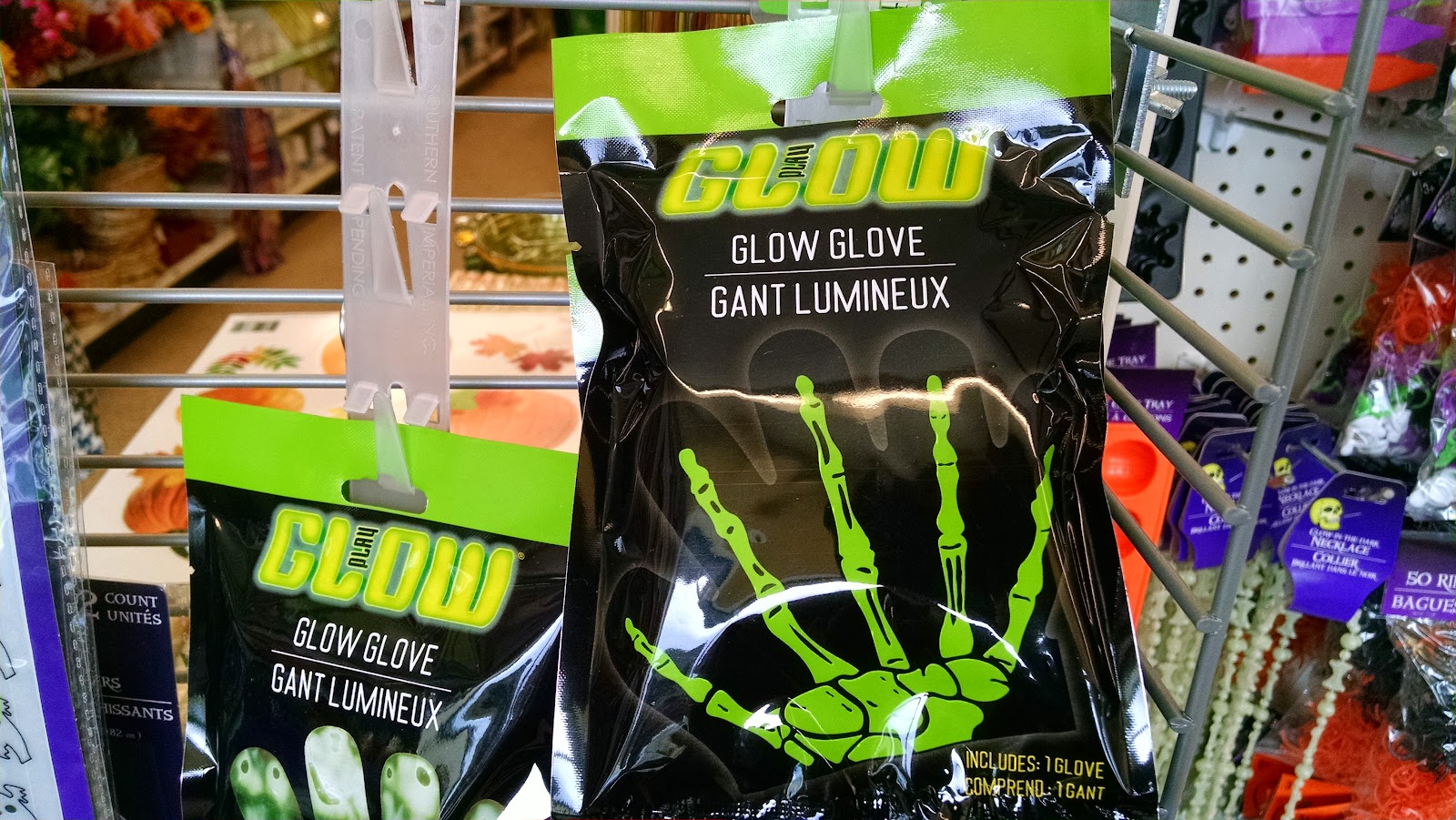 A glove that glows in the dark, because it has that glowstick stuff in there. Look close: The package only includes ONE glove. Rip off. That's like reading that a can of Coke is 2.5 servings. It's bullshit. Sorry for swearing, I get passionate about stupid things. 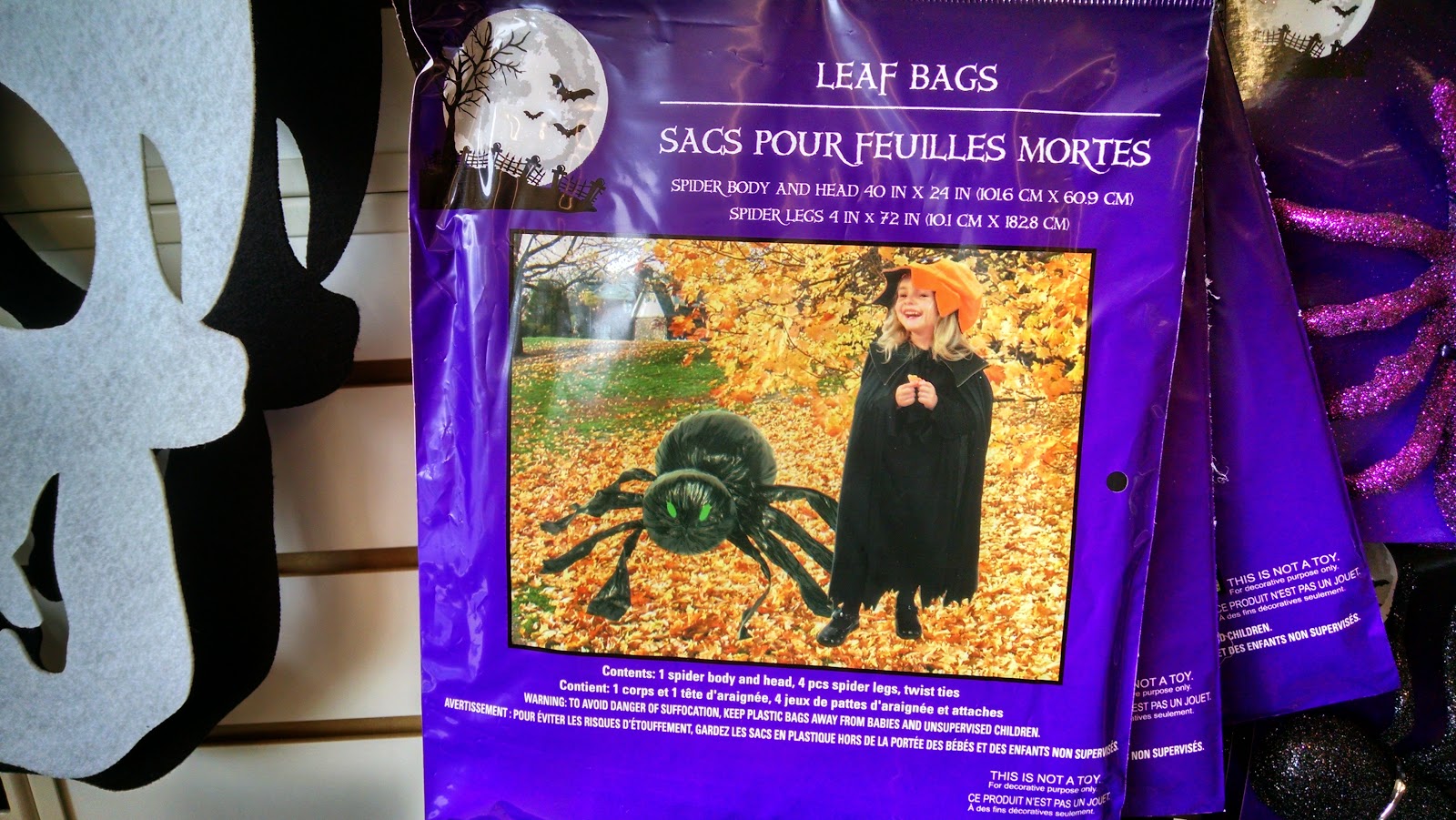 Now, I've talked about the best Leaf Bag Bag I've ever seen, but I need to point out a few things on this one, anyway. 1) Both the spider bag and the little girl are Photoshoped onto that leafy background. Why? 2) Why did they choose to even Photoshop the little girl-of-unknown-hat-type onto this bag at all? For "scale"? 3) In French, these bags roughly translate to "SACKS FOR DEAD LEAVES"! Not sure why they had to specify "dead" ... were French people going around pulling leaves off of trees to fill their spider bags? It's all weird and disturbing. 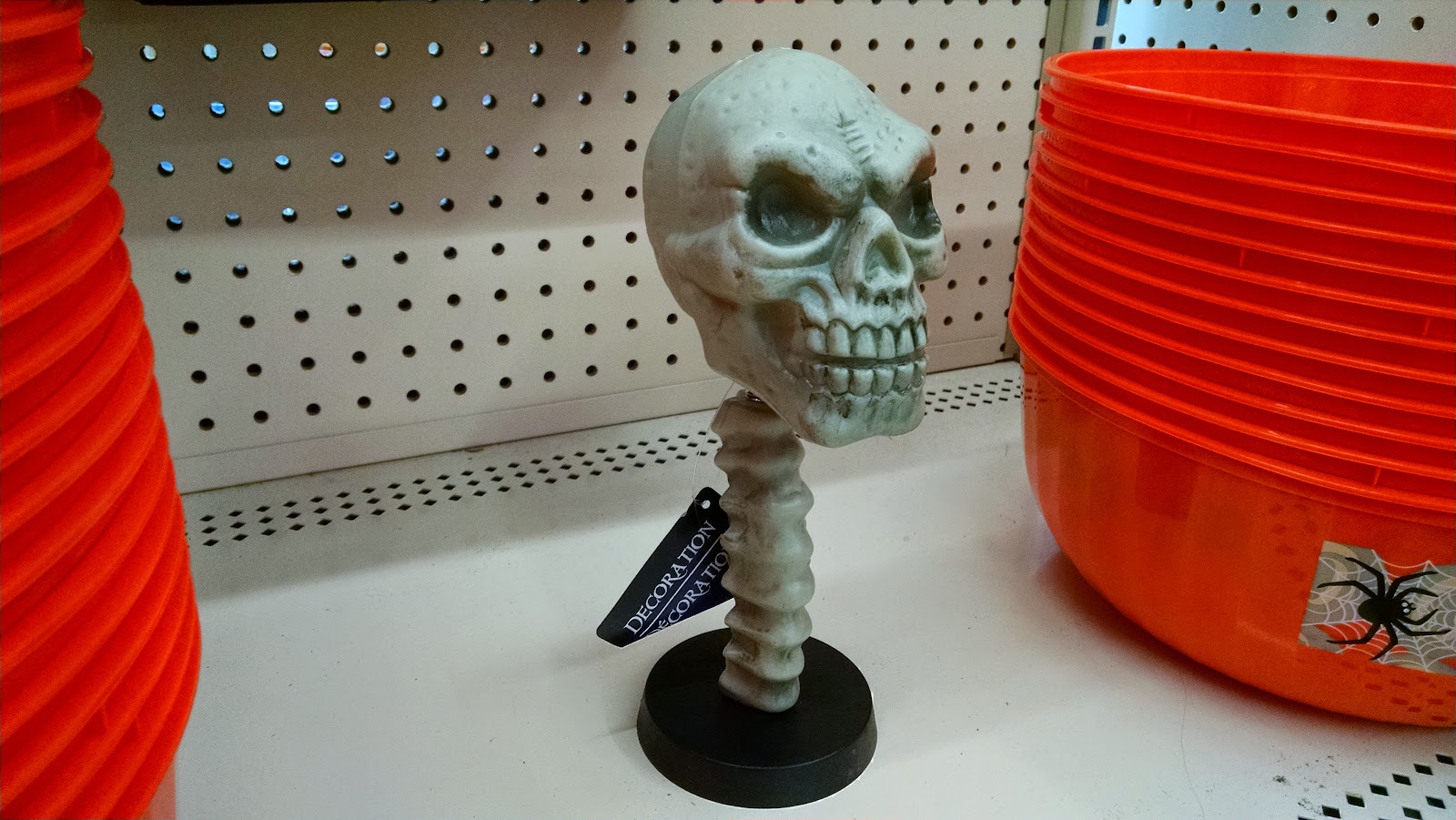 Skull & Partial Spine Bobble Head. I'd mount this in my car, like a hula girl in a convertable, so it could bobble along as I tool down the highway, following the speed limit precisely and being passed by everyone else, as I get more and more mad at them. "Guess rules are just for I-before-E!" I'll shout, to no one who cares. But perhaps having a bobble-skull would so enchant me that I'd crash, because I wasn't watching the road. Then MY skull would bobble on MY spine. 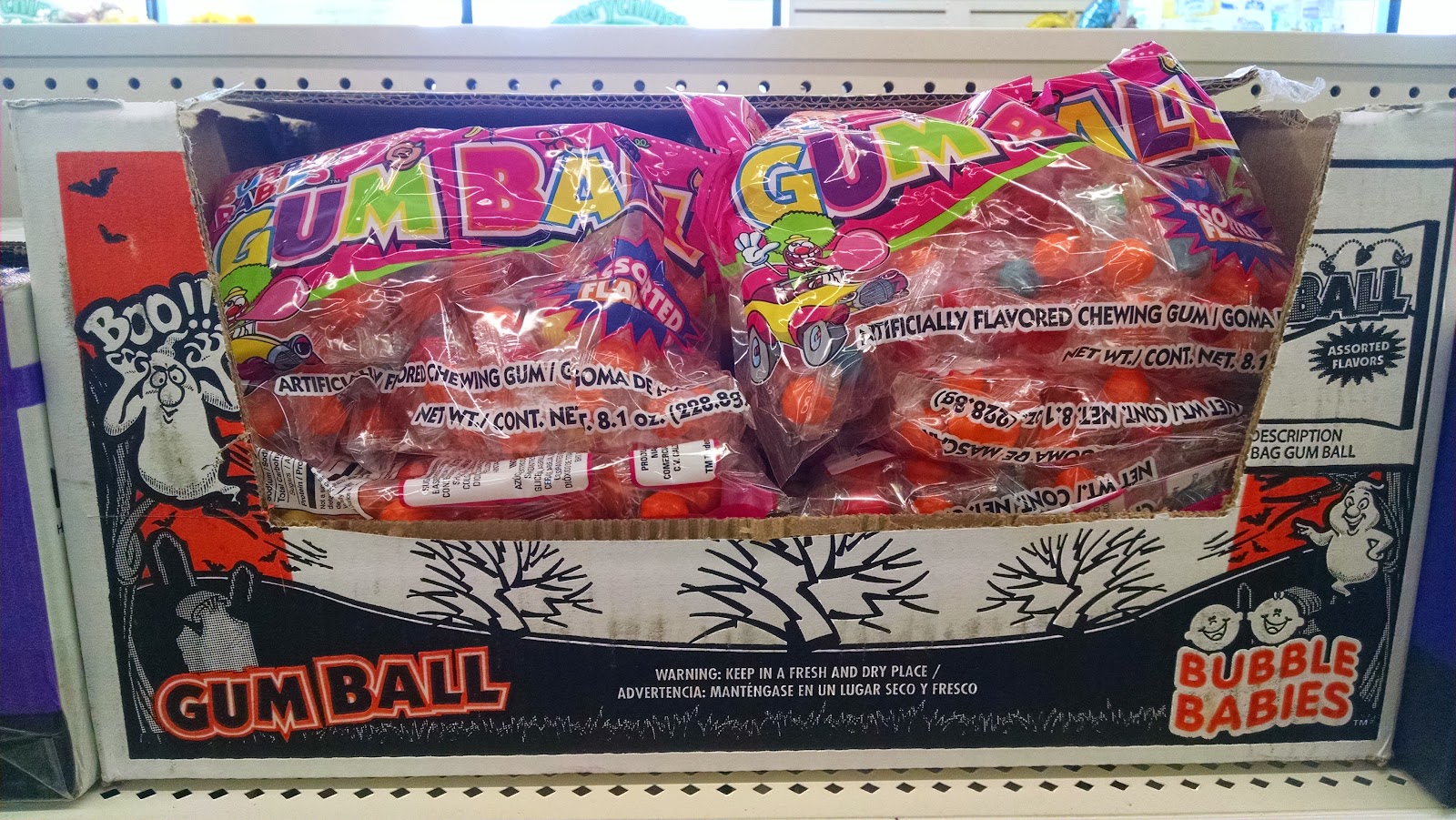 I included this gum ball display NOT so I could bring up my disgust at eating anything from a dollar store (for a THIRD time!), but to point out the box! It's everything that's right about Halloween packaging, yet who ever pays attention to the display boxes that candy comes in?! I should (and will) do a future post on Halloween candy display boxes.

But, back to the box at hand: On the left you have scary ghost, on the right you have sassy ghost, then you have "bubble babies" under that! Each a grim rictus grin on their too-round heads. Also: "bubble babies" sounds like a term that doctors USED to use for some childhood condition, but then the world deemed it un-P.C. Oh, and don't for get the lightning trees, in the center. Those are boss, too. 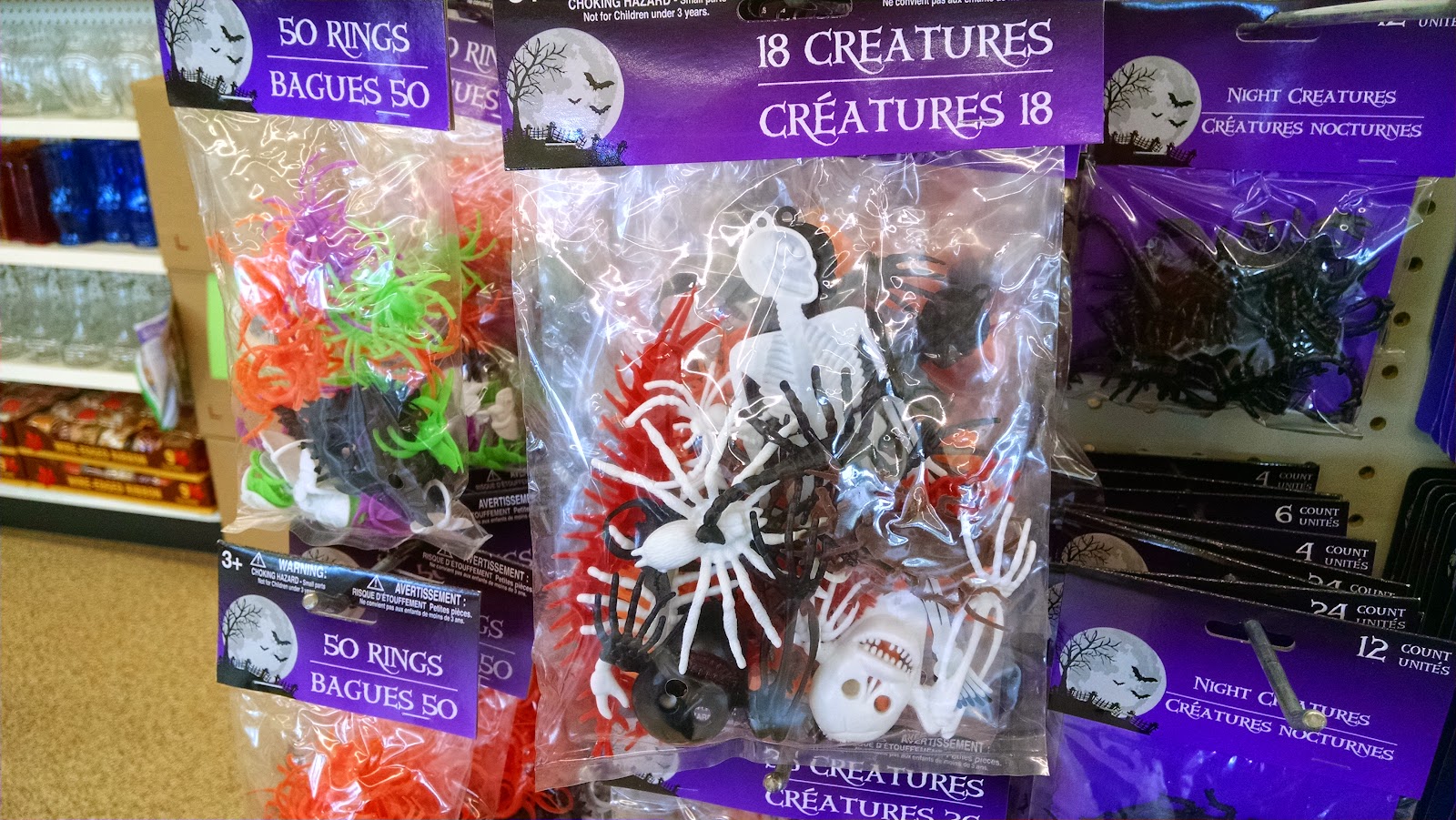 And now we see one of the only two things we wound up buying: An assorted bag of plastic things. I'll probably go into detail on it, in a future post (posts makin' posts!), so i won't even tell you why I bought it. You'll never guess. But it's certainly NOT for the plastic cockroaches ... jibbleyshiver. Gross. You know, no matter how fake fake roaches are, they can still, at a glance, be mistaken for the real thing, if you leave them lying around - especially when you've lived in an apartment where you've seen real roaches, of similar sizes. (I live in New York City, it happens #ComplainBrag)

I will re-use that paragraph in my write-up of that bag of creatures, by the way, so get used to it.

So we end it here, with me promising two follow-up posts to this one, very lackluster post. Do you take the gamble that the future posts will really make up for it, or do you cut your losses, now, and never return? Meh, I'll still incessantly tweet at you about it on Twitter, so you can run, but you can't hide.

Speaking of: I can be followed on Twitter @sommerjam. DO IT NOW!