Is CVS even a national brand? Will you all understand the concept of a large pharmacy that also sells Halloween goodies?! Hold up, let me Google that...

So, if you don't live near one, it's your own fault!

WHAT AN INTRO, HUH?! Anyway, here are photos I took of the inside of my local CVS, with some comments slapped on in a hap-hazzard way. PS - This trip was inspired by my beautiful wife who, offhandedly, said, "Wanna go to CVS and look at the Halloween stuff?" It's suggestions like this that are why I married her and why I will never stop loving her. 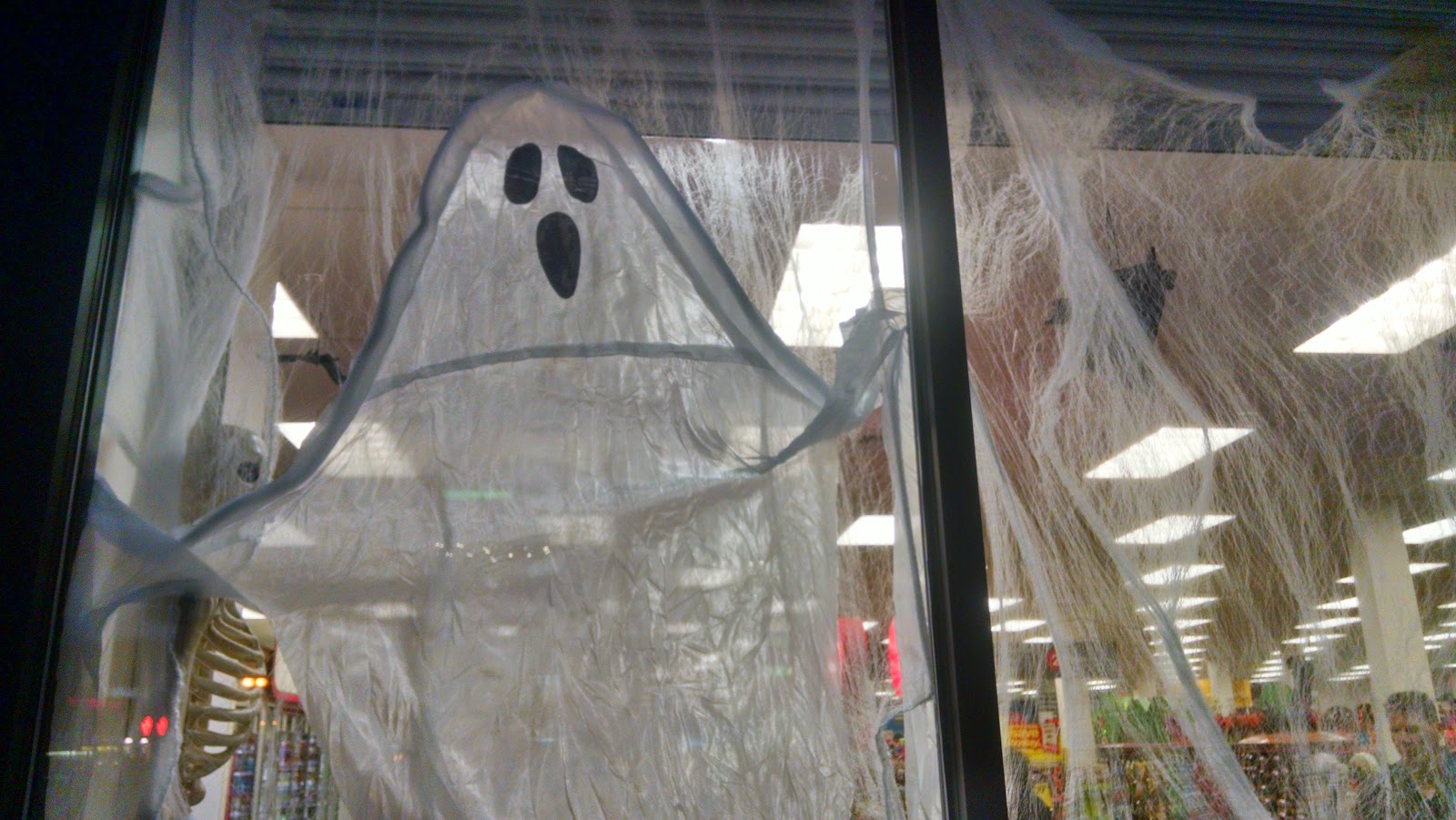 The windows were festooned with those spider webs in a bag (the ones that, for some reason, no one follows the clear directions on the package to "stretch thin for best effect" and let them be all clumpy) and some make-shift ghosts. I didn't see these ghosts for sale, inside, so I'd like to think that they were the creation of some enterprising, Halloween-loving employee. I like to imagine that my local CVS workers enjoy their job enough to come up with original window decorating ideas. 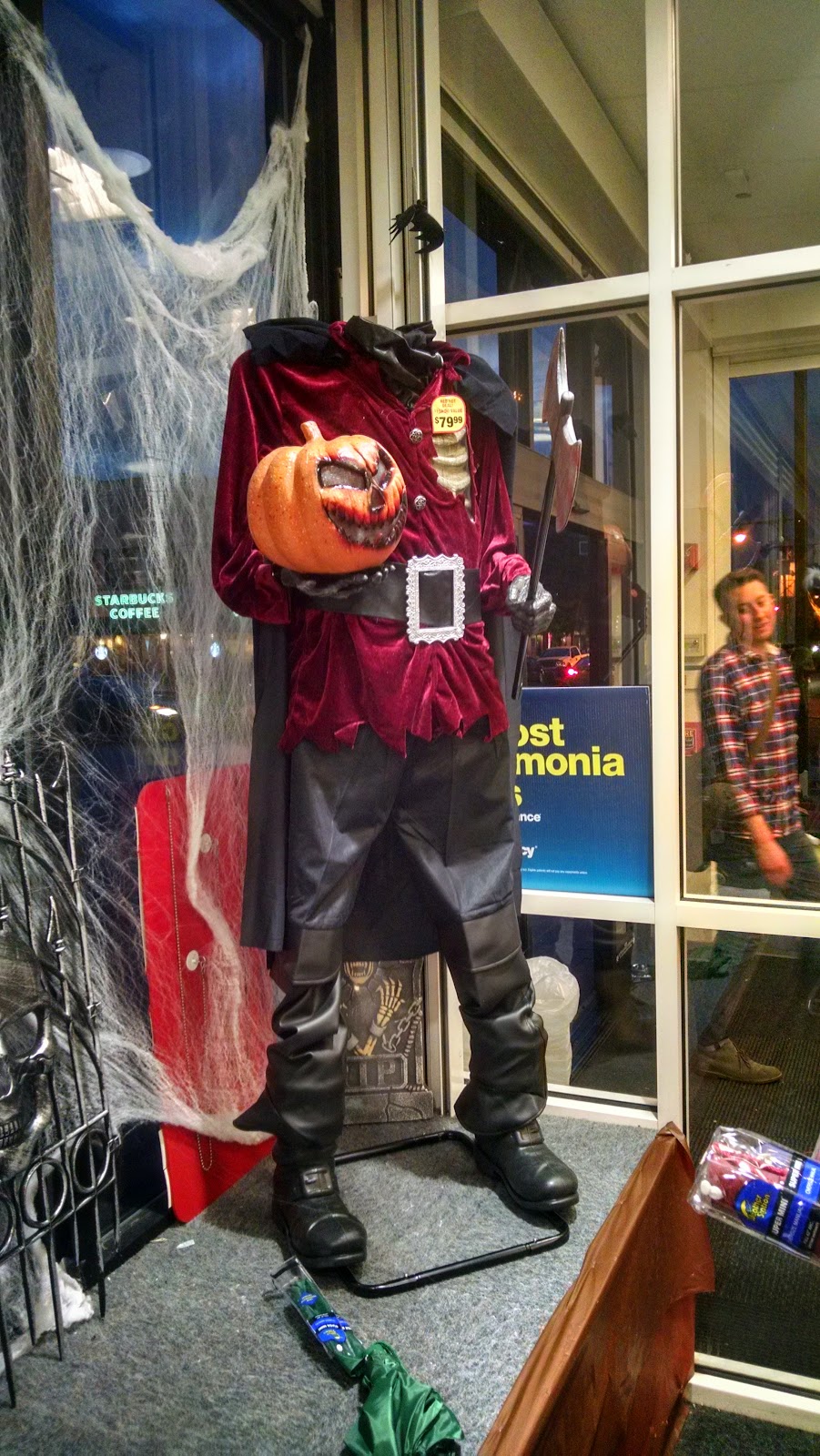 Ichabod Crane shall run in fear of this 6-foot tall headless horseman ... that is, until the spectre slips on one of the several umbrellas left strewn at his feet. Or are they there as a lure? "It's raining outside ... come get an umbrella..." BEHEADED BY A HESSIAN! 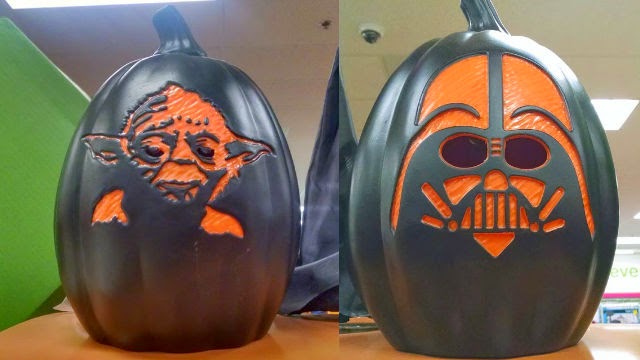 It's nice that Star Wars fans finally have a way to express their Star Wars-y love at Halloween, via  plastic pumpkin. 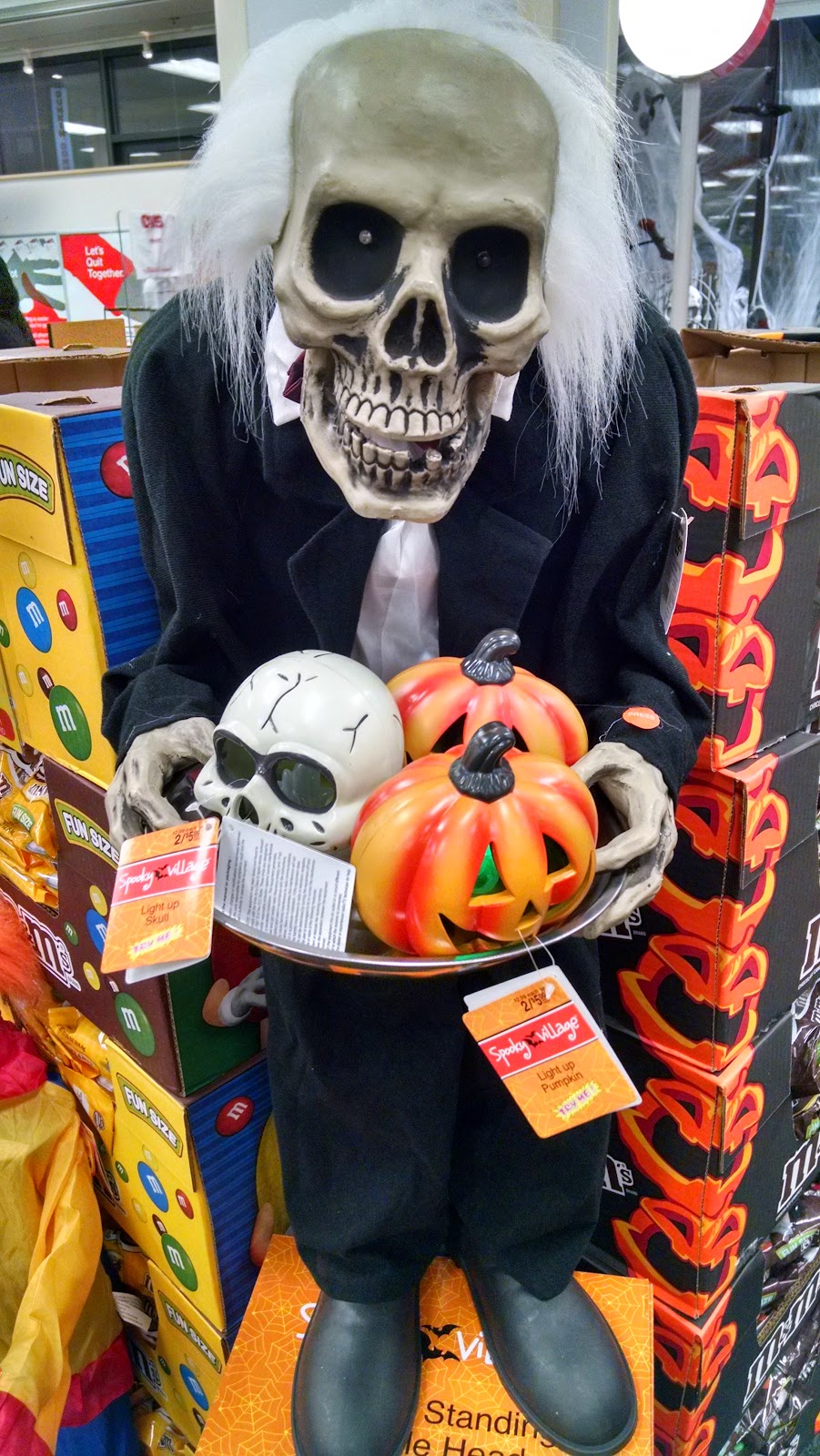 Dead butler, offering a selection of light-up pumpkins and skulls (each sold separately). One day, I hope to own a dead butler ... but via natural means. (By employing a manservant who dies.)

In a couple of weeks, this will be a picked-over trash-heap, with winter items impinging on the skulls and spook-tacular-ness, but right now it's a glorious tableau that gives a thumbnail sketch of the CVS Halloween offerings. There's also a self-checkout station, there. A spook-tacular self checkout station. 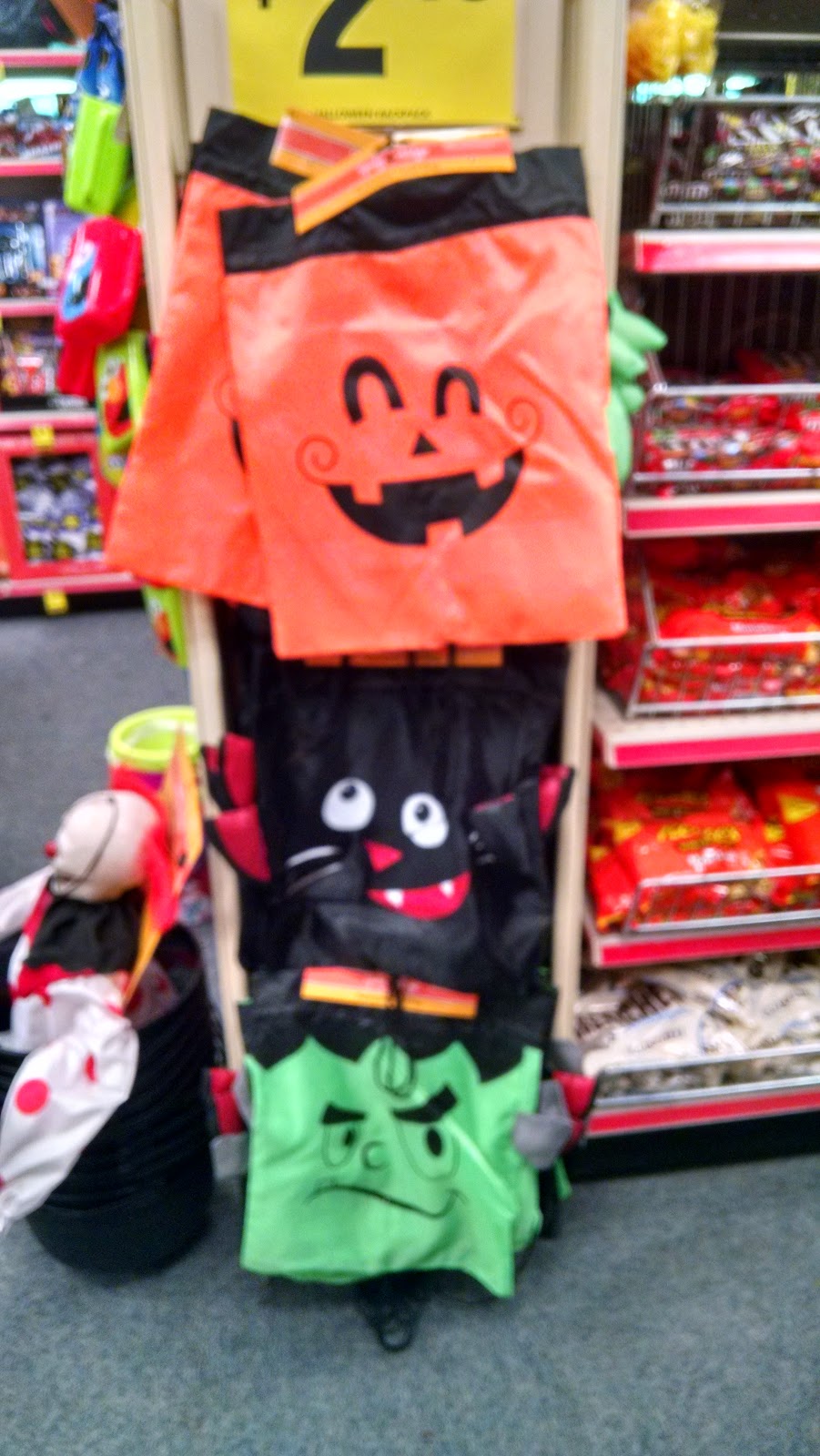 These are Trick-or-Treat bags that can also be worn as backpacks. Cute. Well, in my day, we just used the thick plastic bag that the visiting cops would hand out at PS 42 (our school). They'd be white and have, like, a poorly-printed haunted house one side and a list of 15-or-so tips for a safe Trick-or-Treat on the other. Those bags made me terrified of being out after sundown ... and of apples. Good job, Officer Halloween! You did more harm than good. 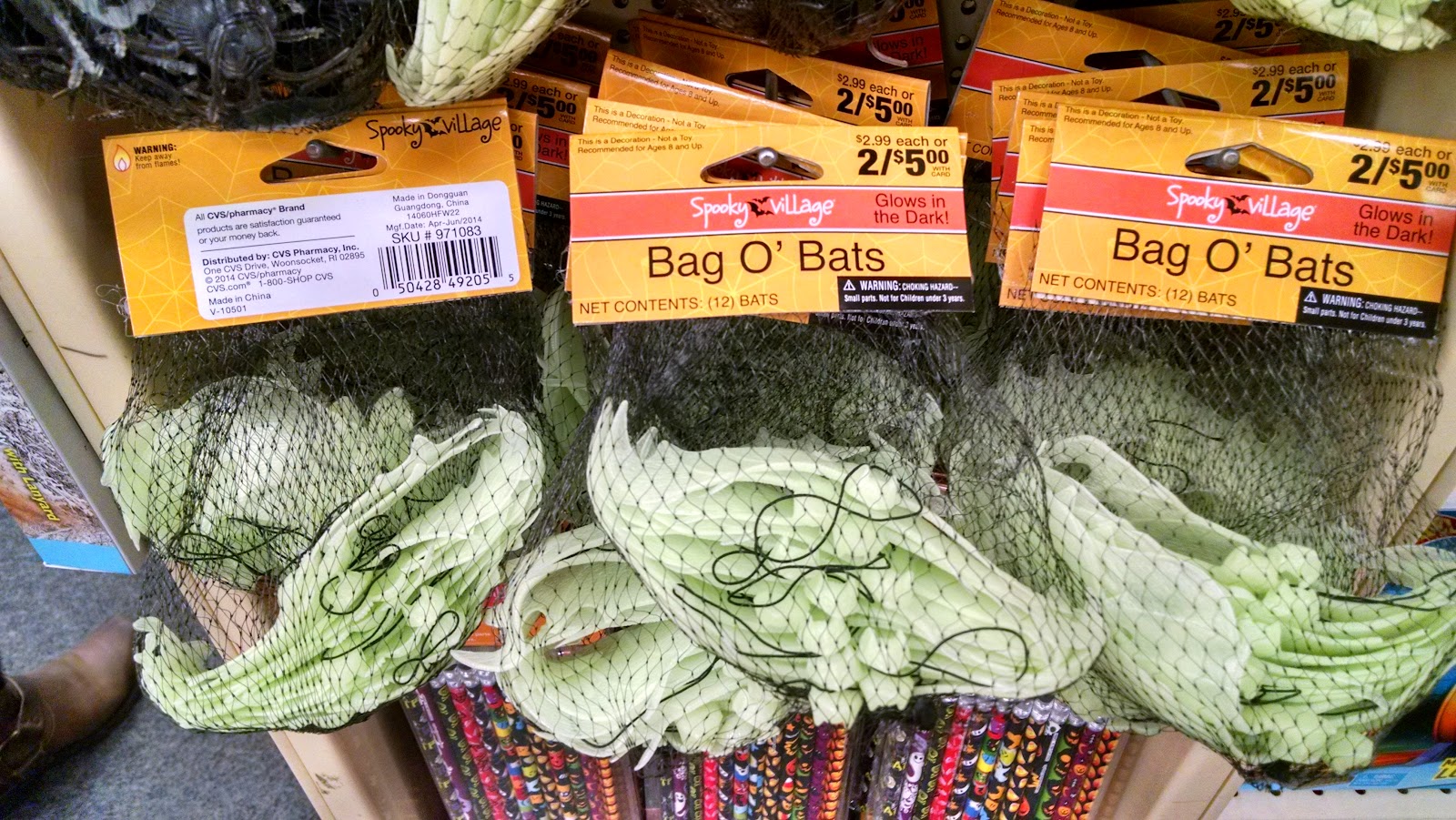 Oh, glow-in-the-dark bag-o-bats. One of these years I am going to succumb to your wiles. Not this year, though. Not this year.... Leaving them on the peg was the hardest decision I ever made. Did I mention that they glow in the dark? I imagine that I'd hang these up all over my house, waiting for them to scare my mom and sister when they come home. Mom will pretend to scream. Sister will ignore it/me. It'll be such fun ... then I remember I'm 37 and live in my own apartment and I don't need 24 glow-in-the-dark bats. 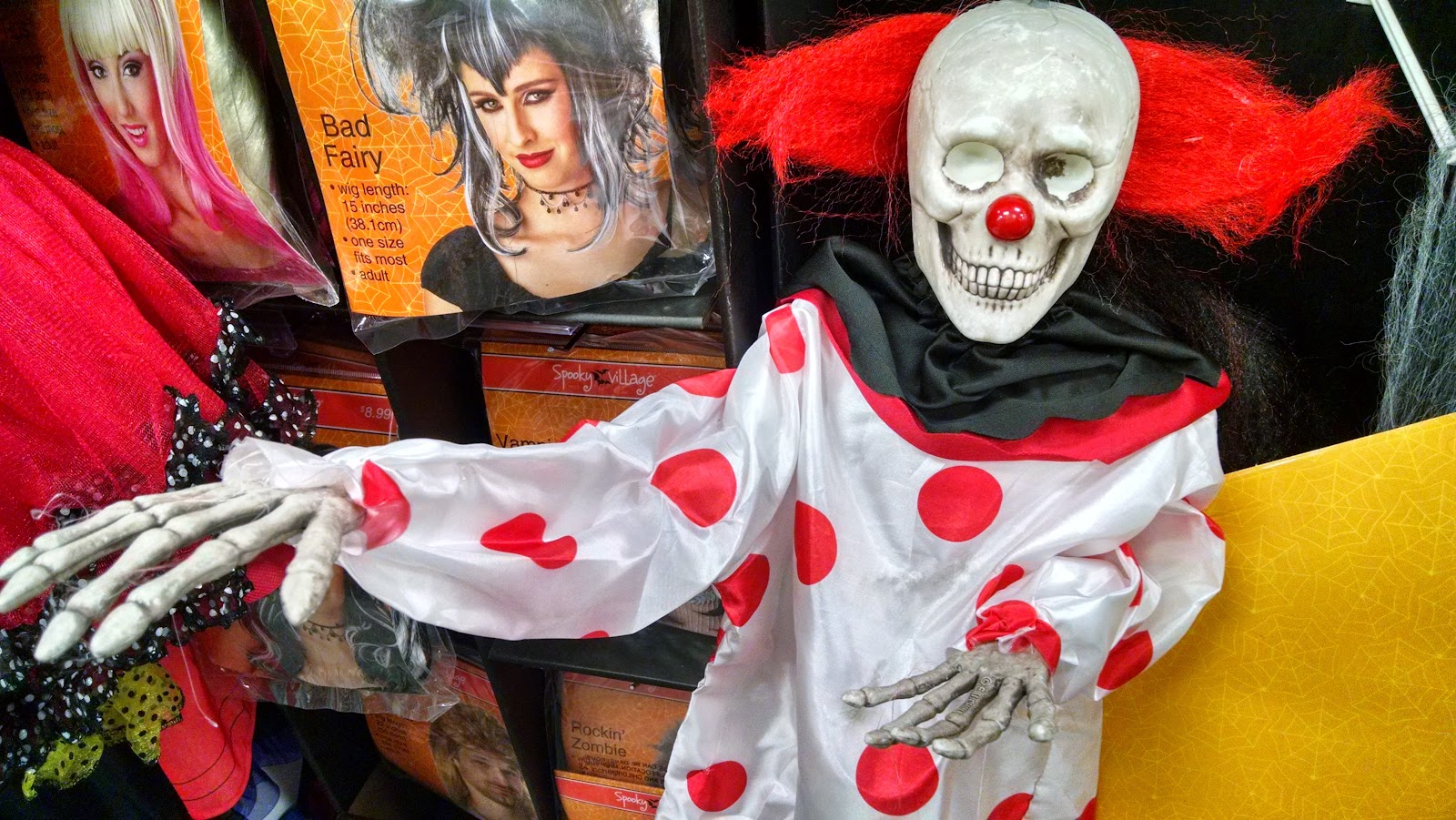 This clown's hands are in "presentation mode" as if revealing that the prize is A NEW CAR! Put him next to your favorite Halloween decoration, as a way to showcase it. Showcase SHOWDOWN it. Remember to have your clowns spayed and neutered. 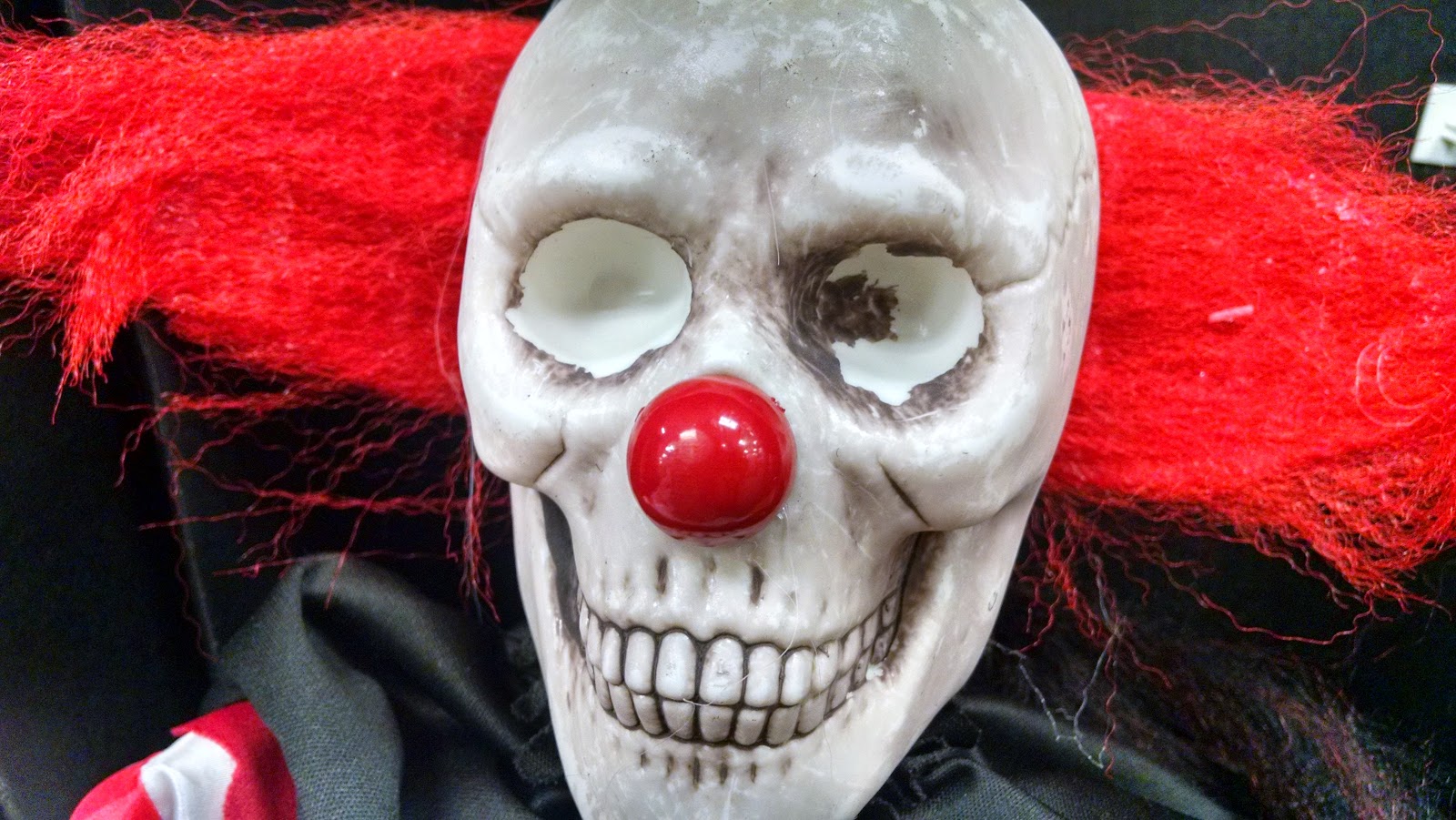 If the eye damage is on purpose, it's perfect. If it happened accidentally, it's also perfect. 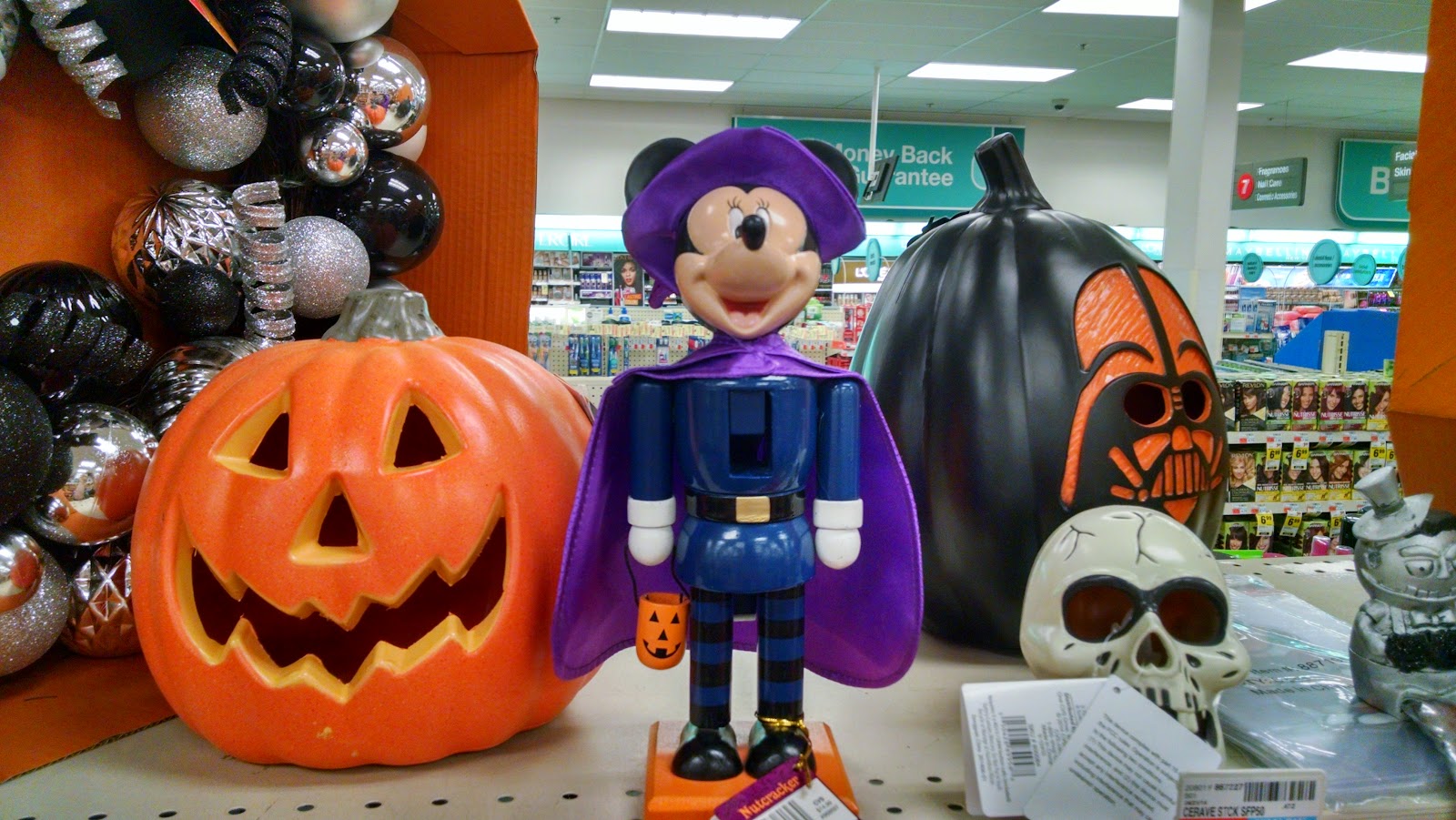 Halloween Minnie Mouse Nutcracker can't keep this man's attention, when there is a sweet-ass plastic Jack-o-Lantern sitting right next to it. Want to be the belle of the ball, Minni? Find some ugly decorations to hang out with to make yourself look hotter by comparison. 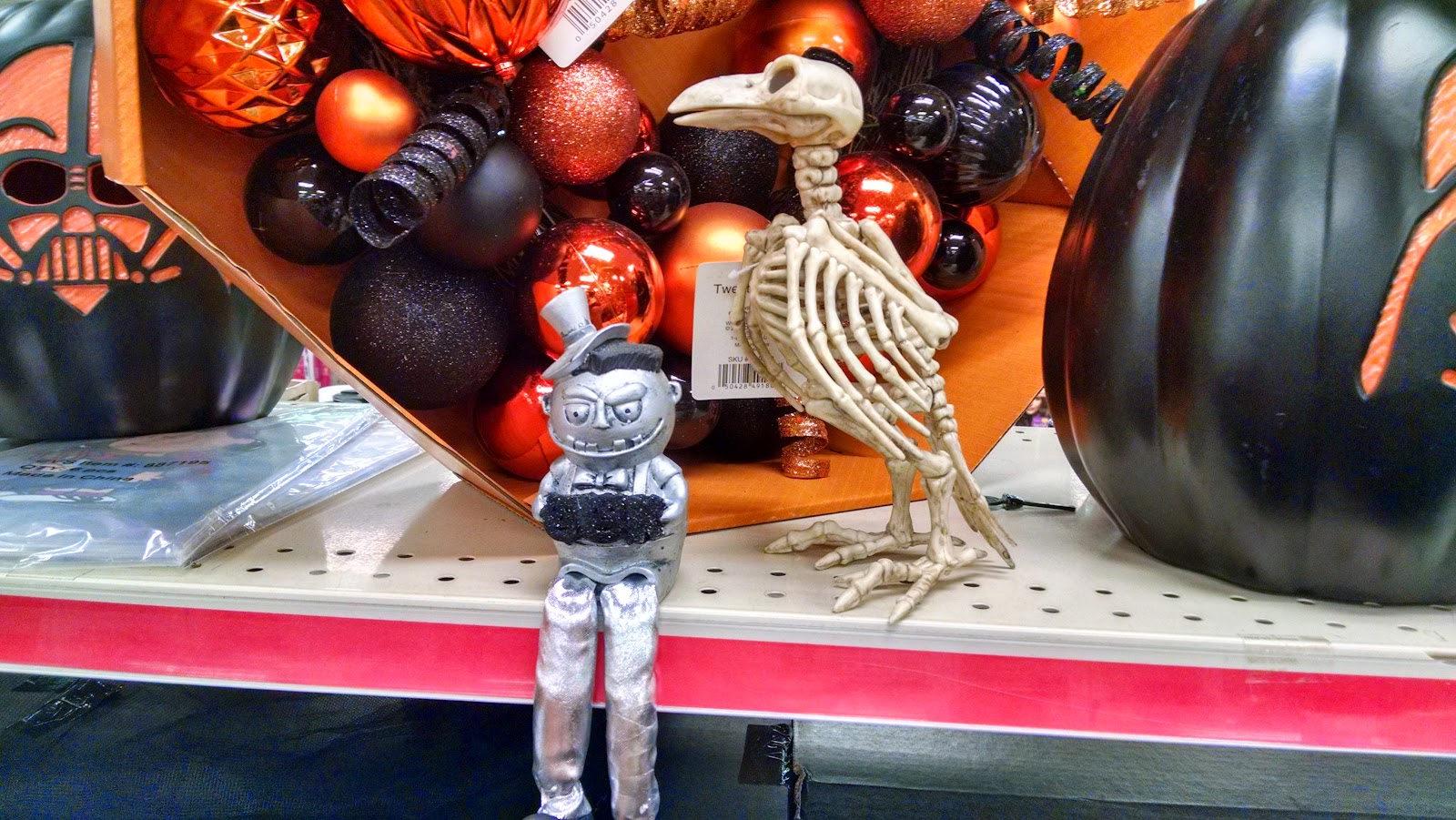 Leg danglers are a "thing", I know, but I'm not sure who is choosing one over, say, the non-anatomical skeleton bird behind him, though. Plus, a decoration that is designed to sit precariously on a shelf should surprise no one when it falls and breaks. 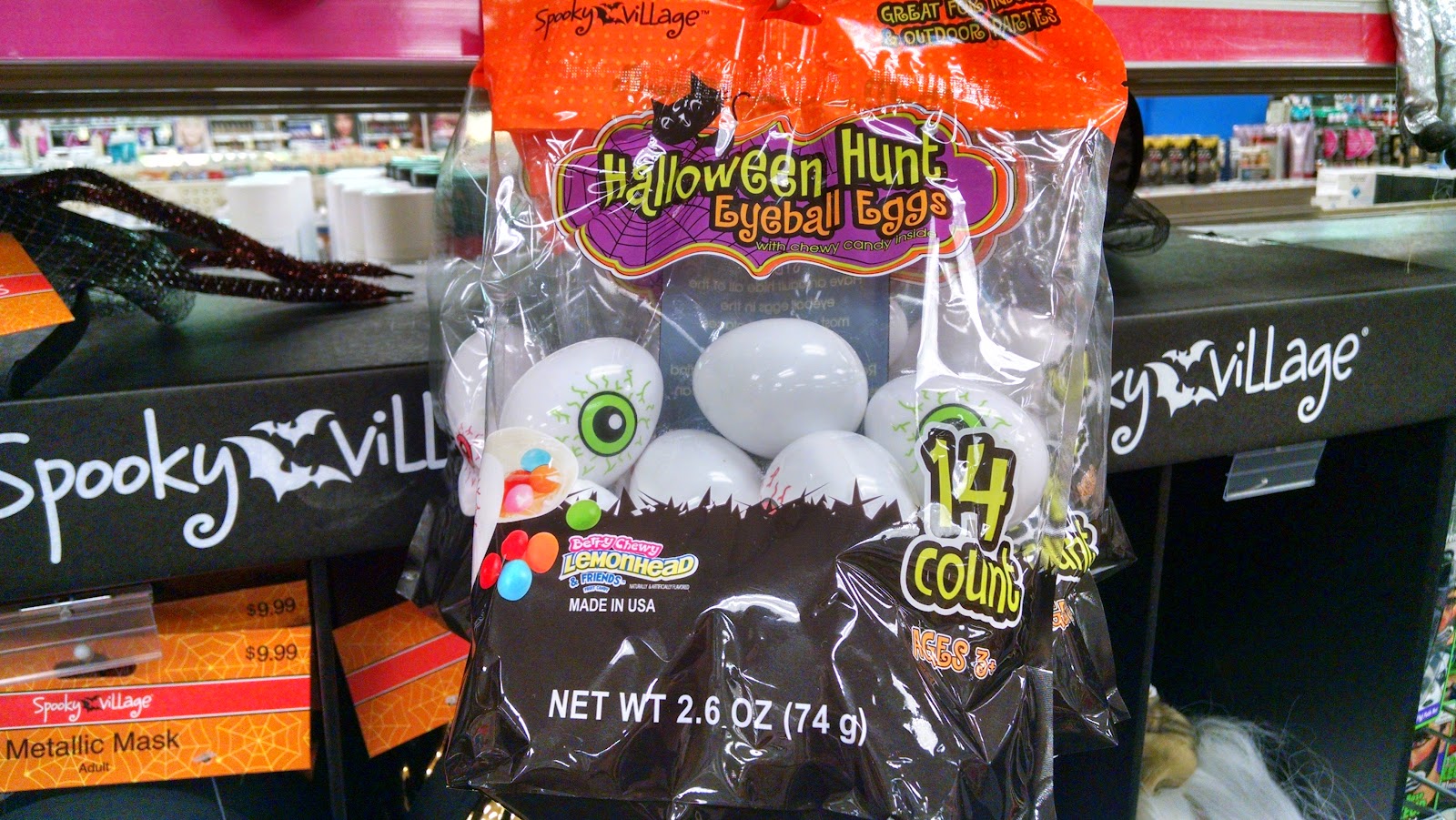 Halloween Hunt is Helen's legal name. That joke is as good as it gets! But, seriously, yolks! You co-opt Easter Eggs by painting eyes on them and filling them with Lemon Heads? I'm not sure how I feel about holiday-specific traditions being applied to different events, but this one seems to work. After all, what with Trick-or-Treat, kids are primed to do a little extra work for their candy, so telling them that you hid it all over the house is par for the course. (Hiding candy all over the house is also a sign of a real problem, at non-holiday times of years. Consult a psychologist.) 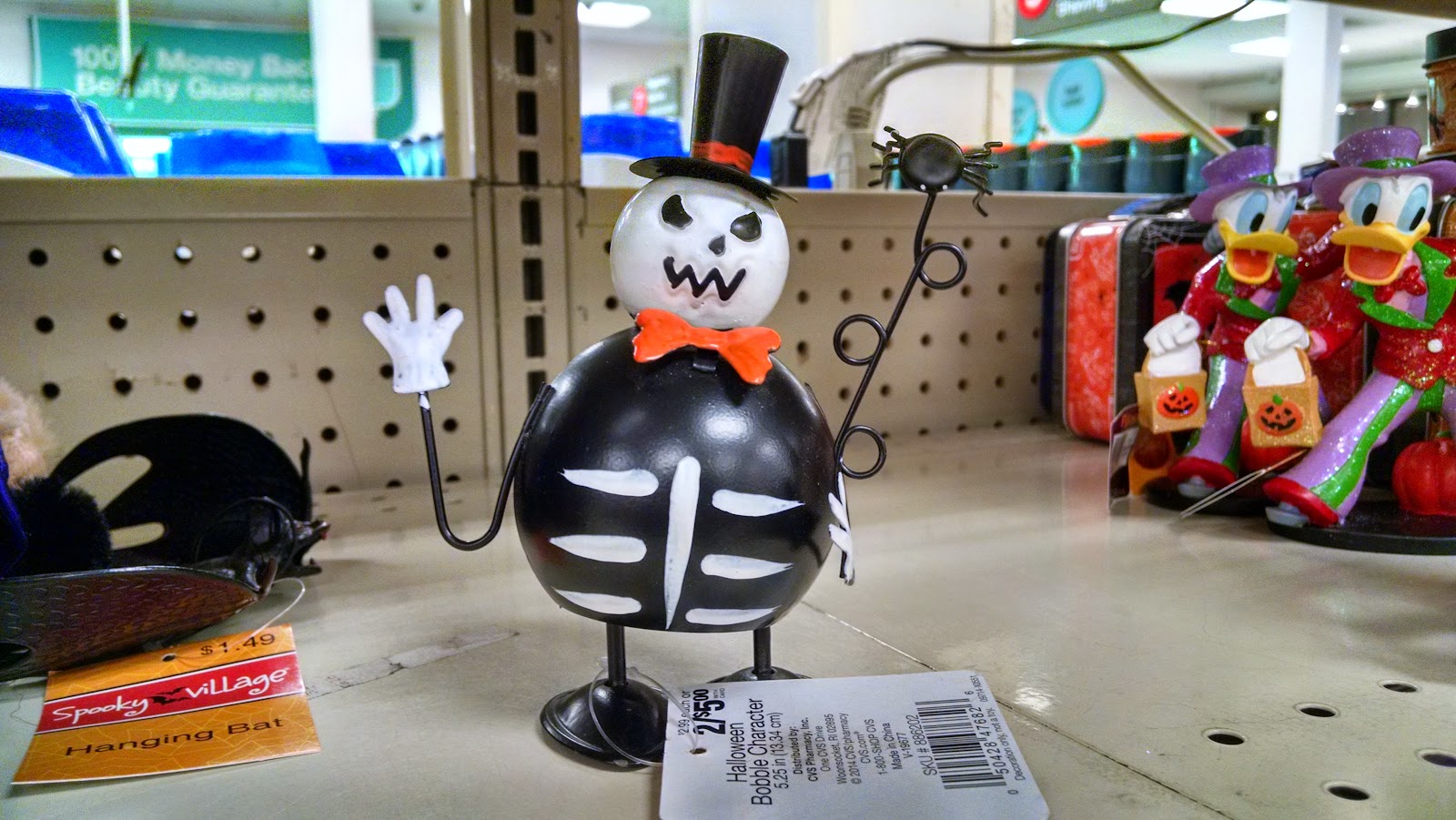 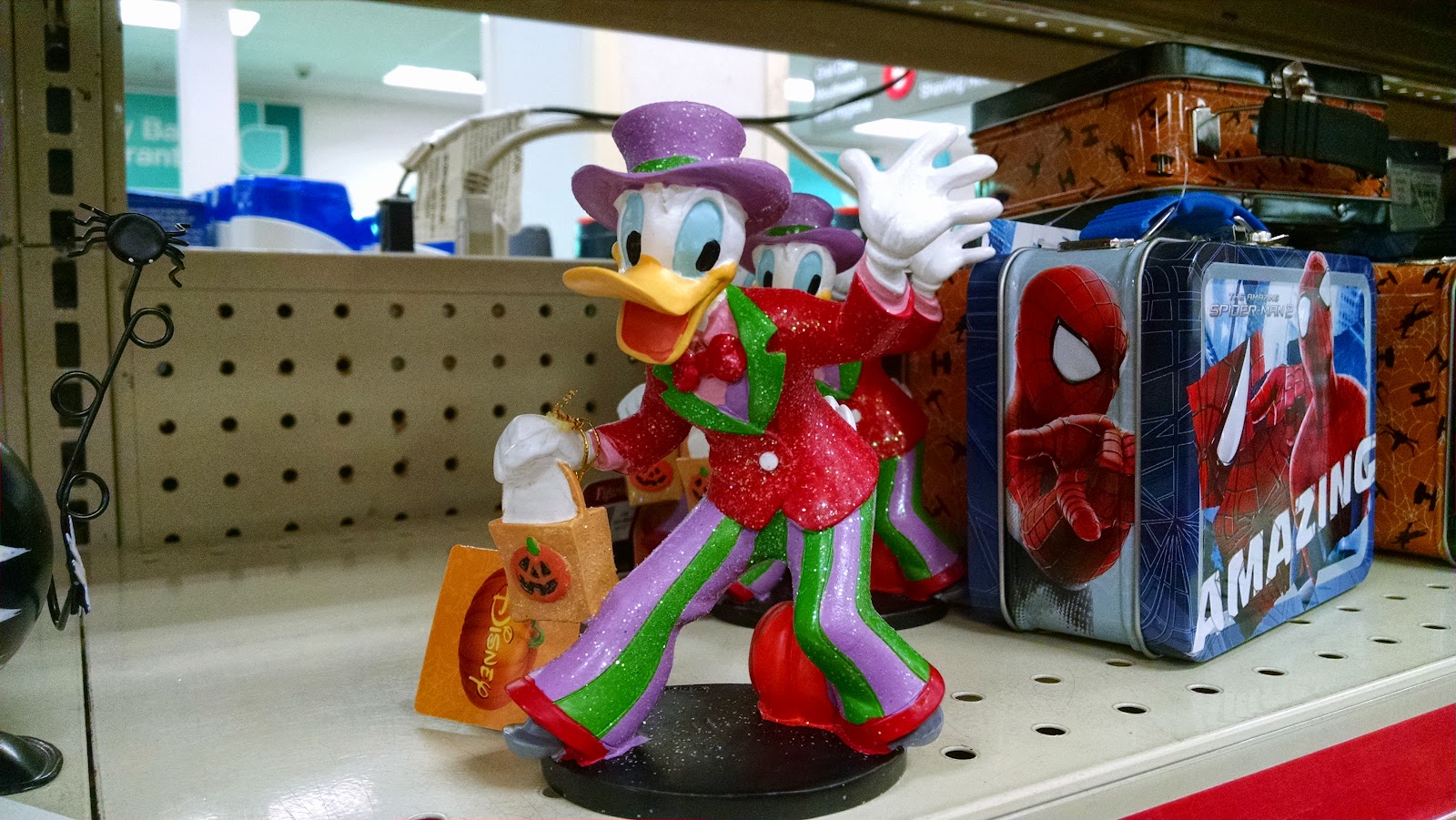 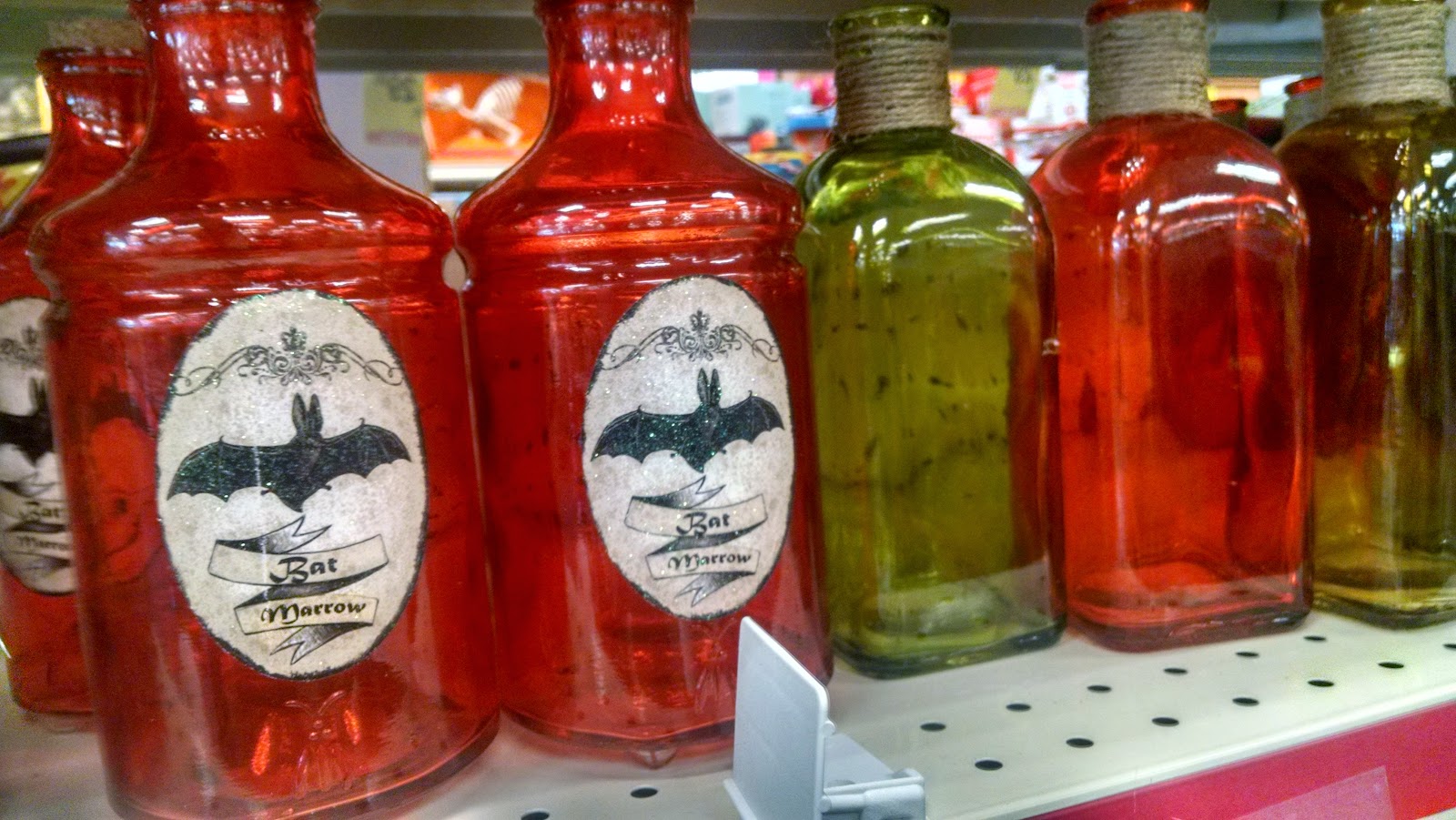 If a person wanted to fill these bottles with Bat Marrow, what would they fill them with? I'm not sure I'd know what that looks like. OR, are the people buying these putting them around to give their guest the impression that they are ALL OUT of Bat Marrow? (Because of all the Bat Marrow-needing incantations they've been doing?) 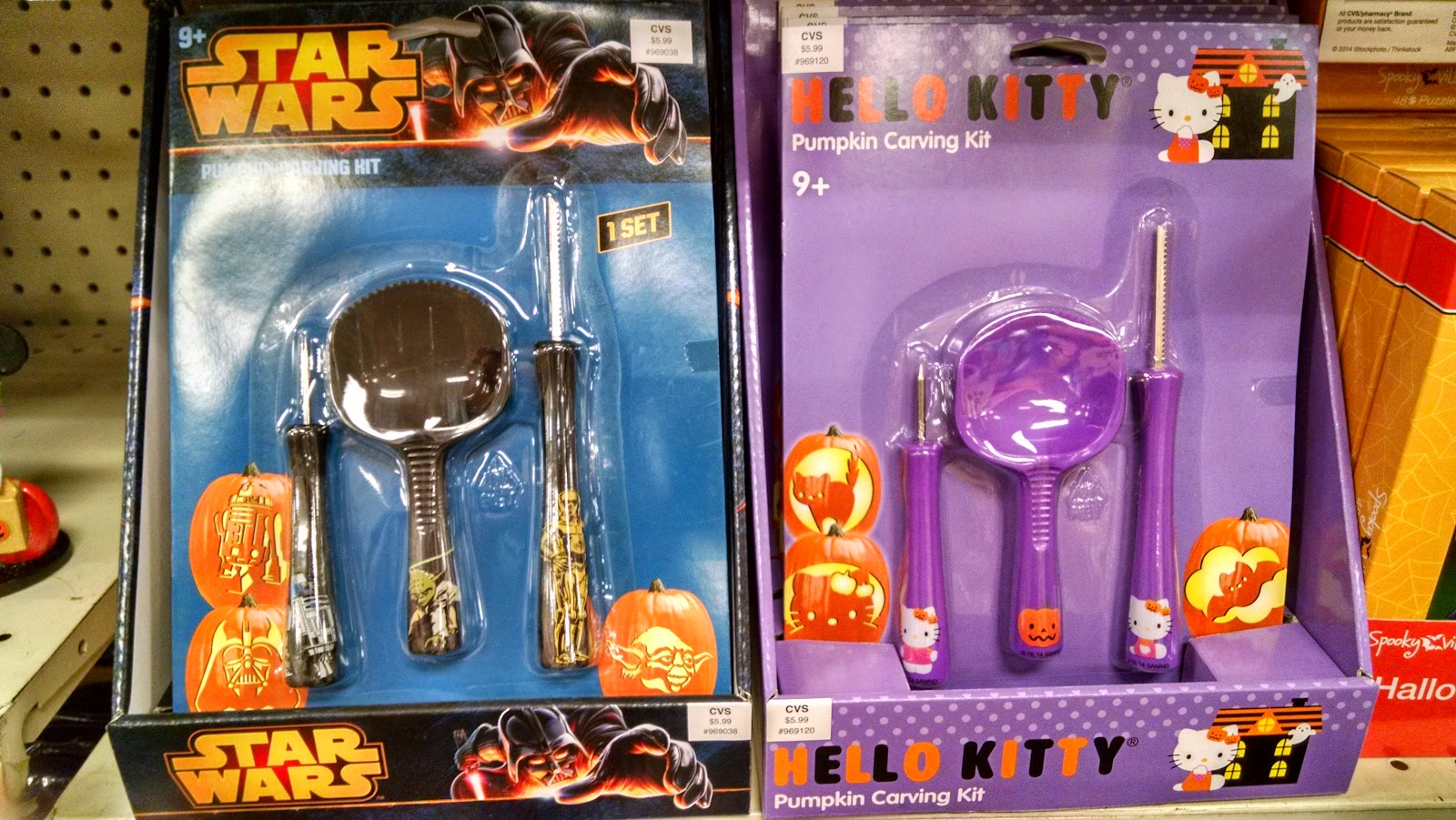 Branding is an amazing thing. Here we see the tools you use to create the Halloween mascot covered in franchise dressing. We're reaching some kind of saturation point. Or end of days. Star Wars coffins will be provided. 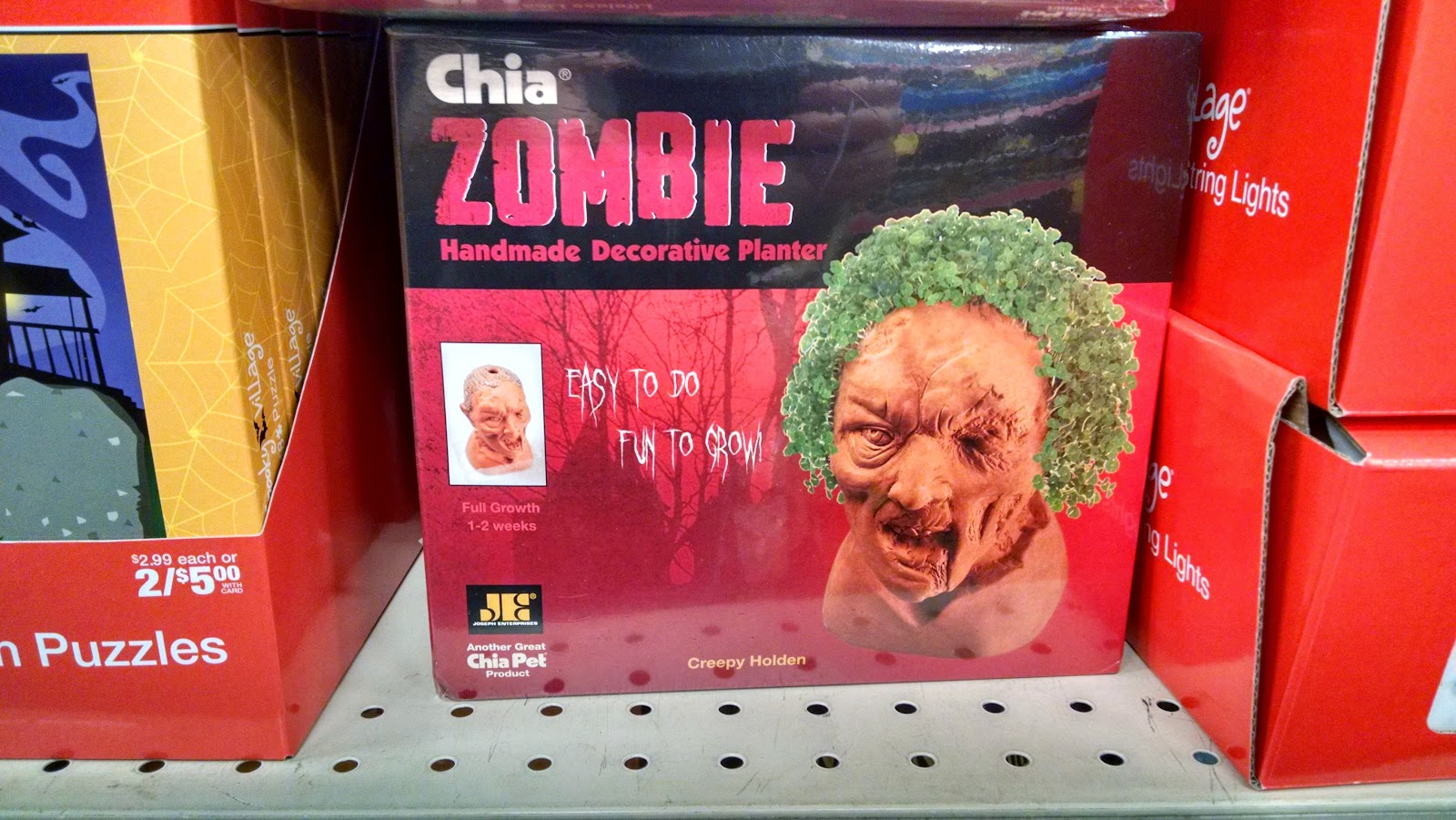 I usually start a Chia Pet in November and watch it bloom, then die, before Thanksgiving is even close. Traditions being iron-clad, immovable objects, I can not grow one of these in October! That's silly! (Add a second Chia Pet to the tradition? What, you think I'm made of money?!) Look, if you want to see what these are like, my buddy Matt, over at DinosaurDracula, bought one and is growing it. Read his review and stop bothering me! 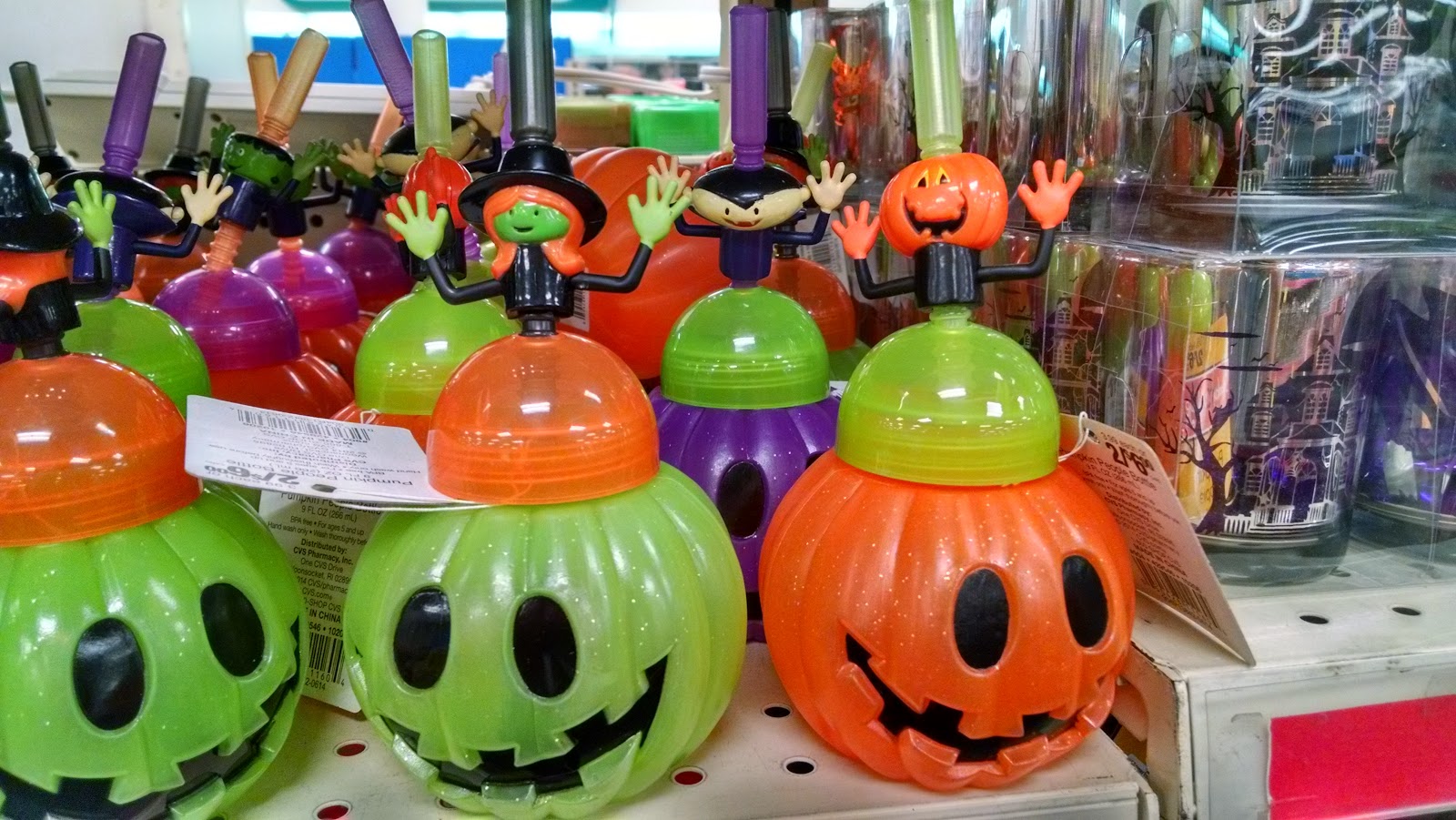 Even though I detest drinking from plastic vessels (it has nothing to do with BPAs, I assure you) and, further, detest drinking through straws (except on very specific, logic-defying circumstances), I wanted each of these "Jazz Handers". They were not called that. Additionally, the pumpkin globe can be detached and used for your Green Goblin / Hobgoblin cosplay/roleplay, too. So this is the best thing ever. Ever. Except for it being plastic and that I'd never use it for its intended purpose. 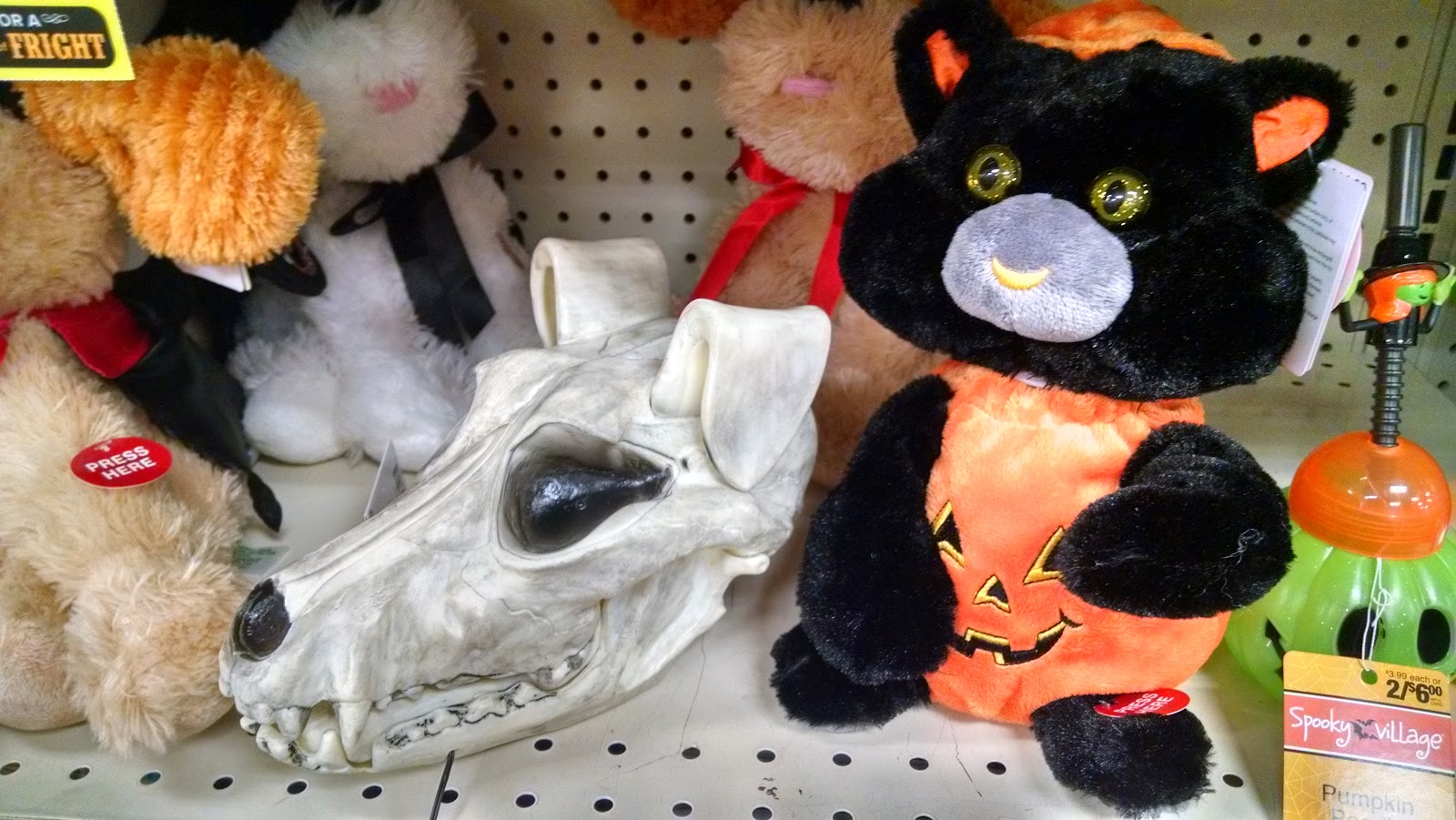 Dog Skull With Floppy Bone Ears was created by someone with no concept of how bones work. Cat-In-Pumpkin, however, is scarily anatomically accurate. 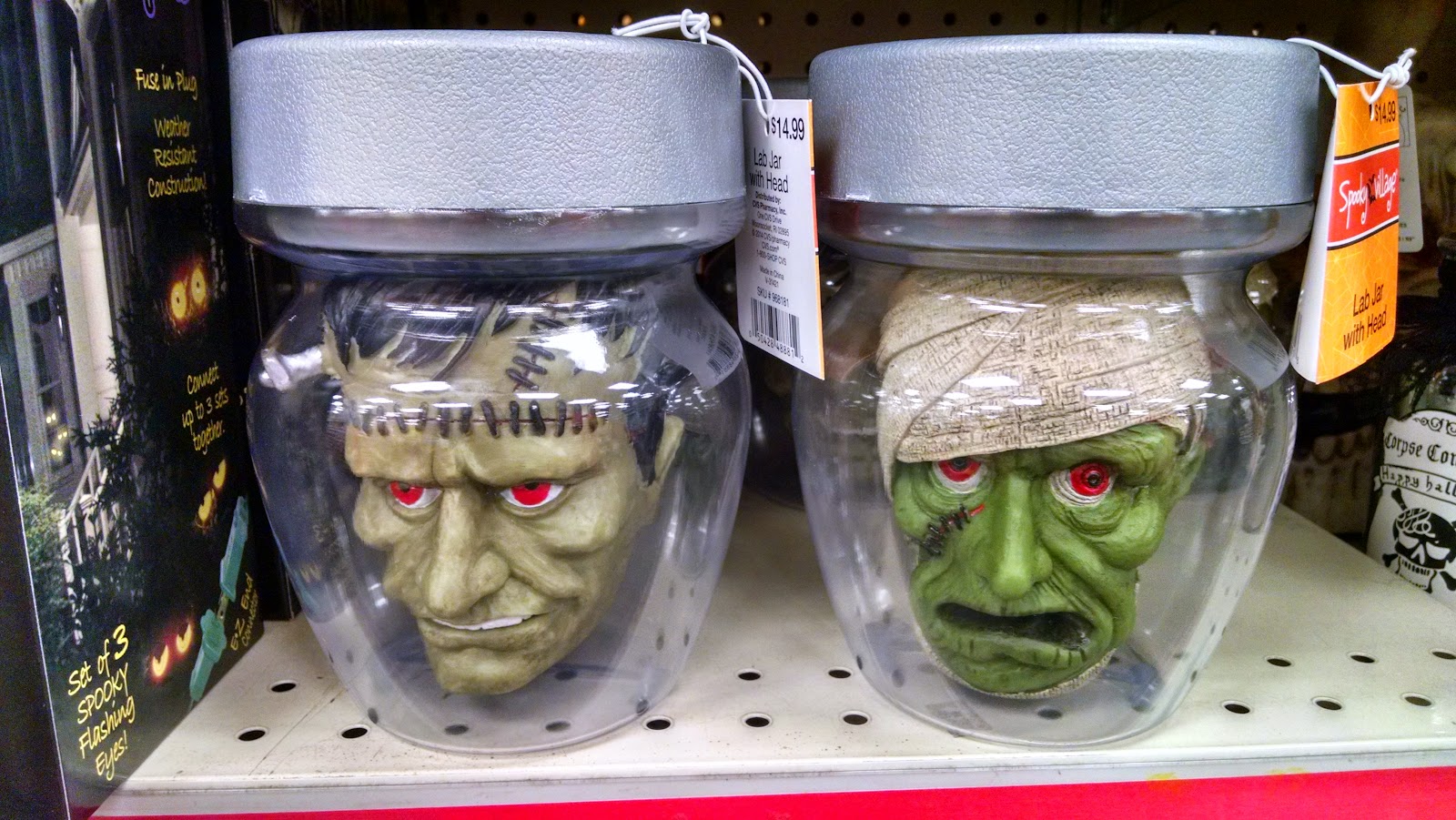 Since everything is animatronic, these days, these guys also talk or sing or something; I forget what they did when the button was pushed. I've seen more life-like heads on the tops of real people's shoulders, though. C-! 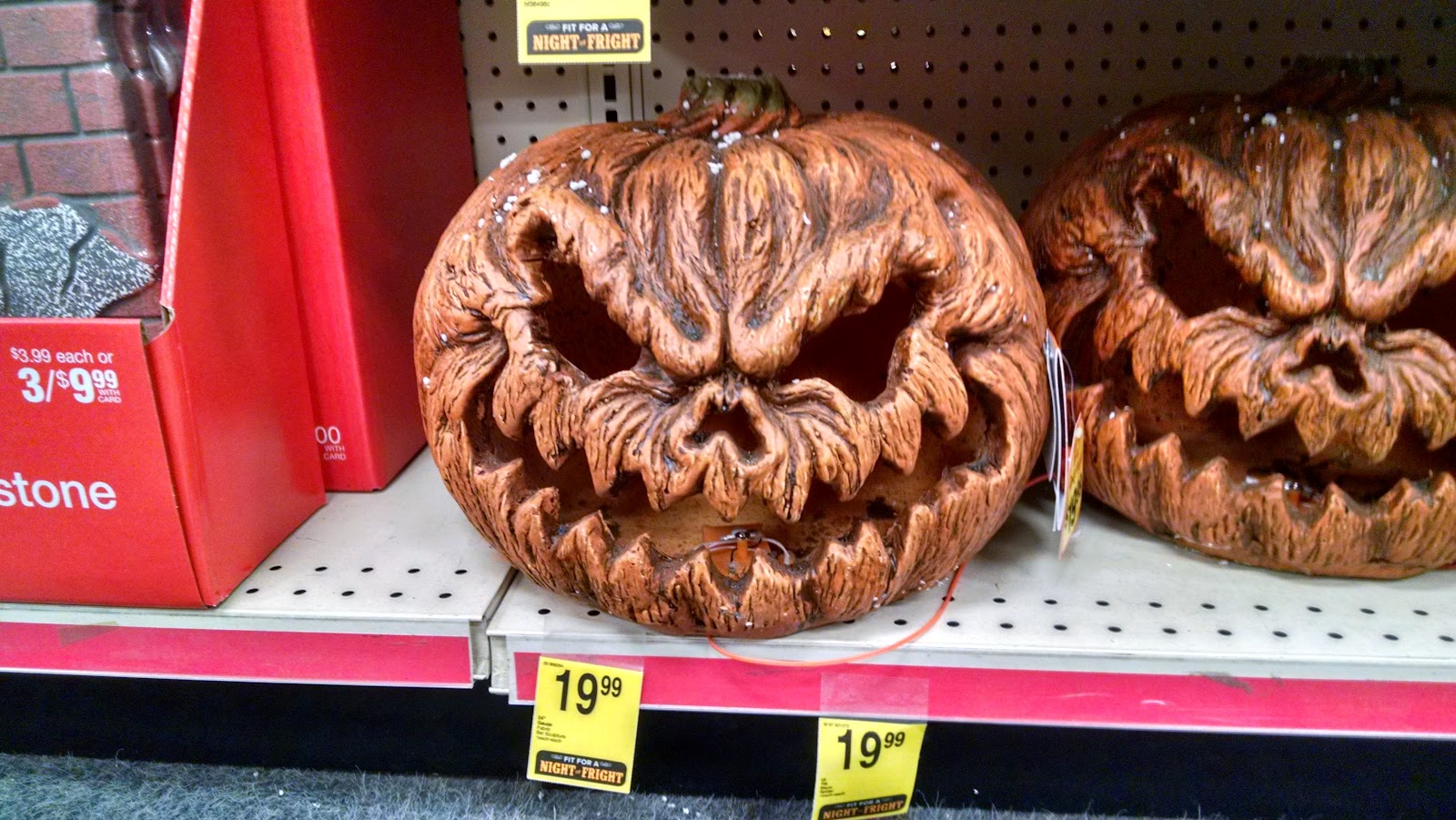 Man, this thing would look GREAT with flames shooting out of it and thrown at a schoolteacher. Problem is, it's made of plastic and the fumes that would occur, if it touched an open flame, would definitely kill you. But that'd be in-line with the spirit of Halloween, right? Maybe you'd come back as a ghost and haunt CVS? There are worse places to haunt. (PS - it lights up red, when turned on. It looks great. This is the one I'll regret not buying / not having enough room in my tiny apartment to store it off-season, once it sells out.) 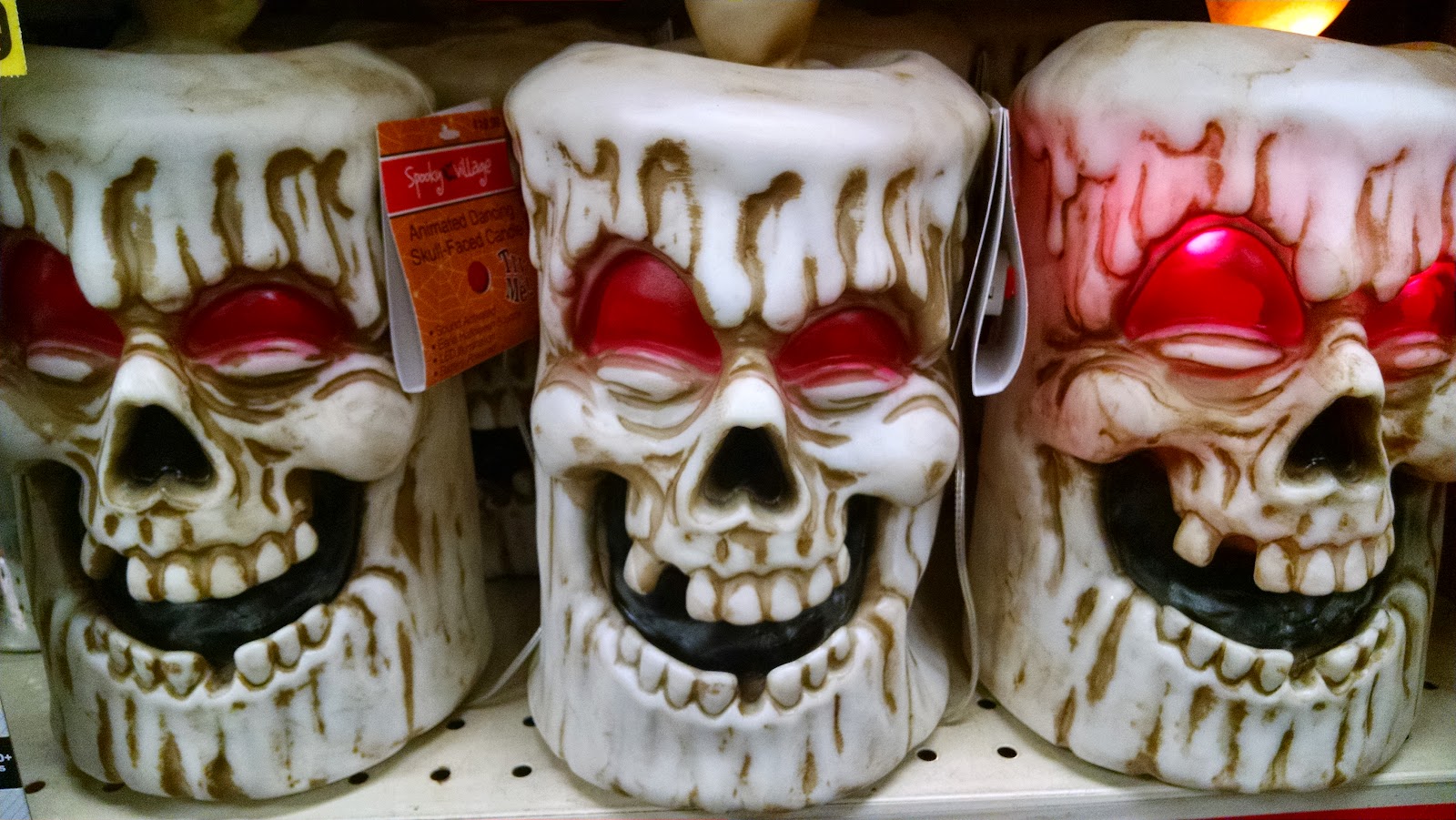 Made of some weird, space-age polymer (rubber) that I certainly did NOT like the feel of, these guys would, when activated, light up and do a little shimmy dance. (Remember the old dancing soda cans from the 80's? It moves like that.) The song it sings during its performance is great, too! Very reminiscent of Walt Disney World's Haunted Mansion. I didn't catch enough of the lyrics to transcribe them (despite the fact that there was a kid pressing all of their buttons, multiple times, from the safety of his stroller, while his mom said nothing. NOTHING!!!!) The song goes something like, "Something something something ON HALLOWEEN NIGHT!" Catchy. Don't you feel like, at other times of the year, these same things are sold in Spencers, but with the tombstone replaced with a toilet? I do. I'll bet they sing classic rock songs with "poop" substituted for lyrics. "Sweet Poop Alabama" or "Poop On You Crazy Diamond".

So, there you have it, a virtual walk-through of some of the Halloween stuff that CVS had to offer this year. I hope shut-ins and agoraphobics found this helpful.


I can be followed on Twitter @sommerjam. DO IT NOW!