Souvenir shops are for tourists and suckers ... and for people who find themselves with a lot of time to kill before a performance of "The Phantom of the Opera".

Disclaimer: I always feel awkward taking pictures in stores. I know for a fact that some proprietors don't like it (like the VERY un-cool grocery store in my neighborhood that hangs "NO PHOTOS" signs at the entrance), so every time I take out my phone to snap a quick pic, I think I'm going to get yelled at. Actually, I often think I'm going to get yelled at. There's a psychological reason for it but I don't know it, and that's not why you're here, anyway! Anyway, that's why this post is not jam-packed with photos, but I'll show you what I was able to get, without having a nervous break-down. I consider each photo a personal triumph. 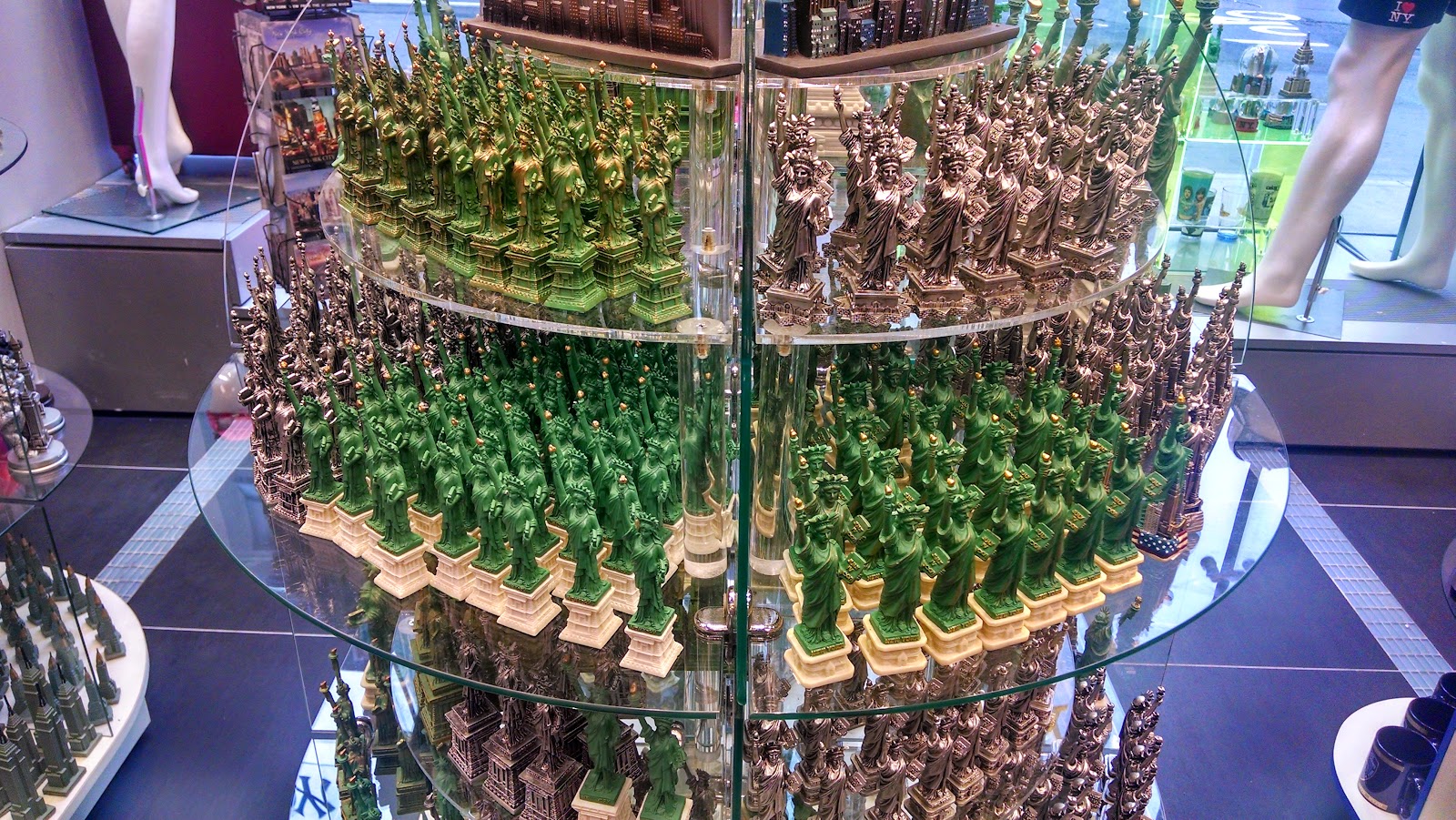 Have I told you before about how I love seeing lots of the same thing, in one place? Like, piles of all the same thing make me weirdly happy. It's probably some kind of mental disorder (another one!) that a good psychiatrist could rid me of, but I'd rather keep it. So, this display, packed with Statues of Liberty really tickled my pleasure center. But not in a gross way, where the cops had to be called. I'm a weird-o, but I can make it in society.

Then: CAUGHT! A voice from a worker! "HEY!" (Jeff makes a cartoon GULP noise, turns toward employee) "There's a better picture on this side. Bigger statues. Very nice!" Relief.

Two quick things more about this interaction: First: Just to show you how strong my  aversion to photos-in-stores is, even AFTER getting this ersatz "blessing" from an employee, I was STILL cagey about it. SECOND: Stop trying to tell me how to run my blog, souvenir shop owner! 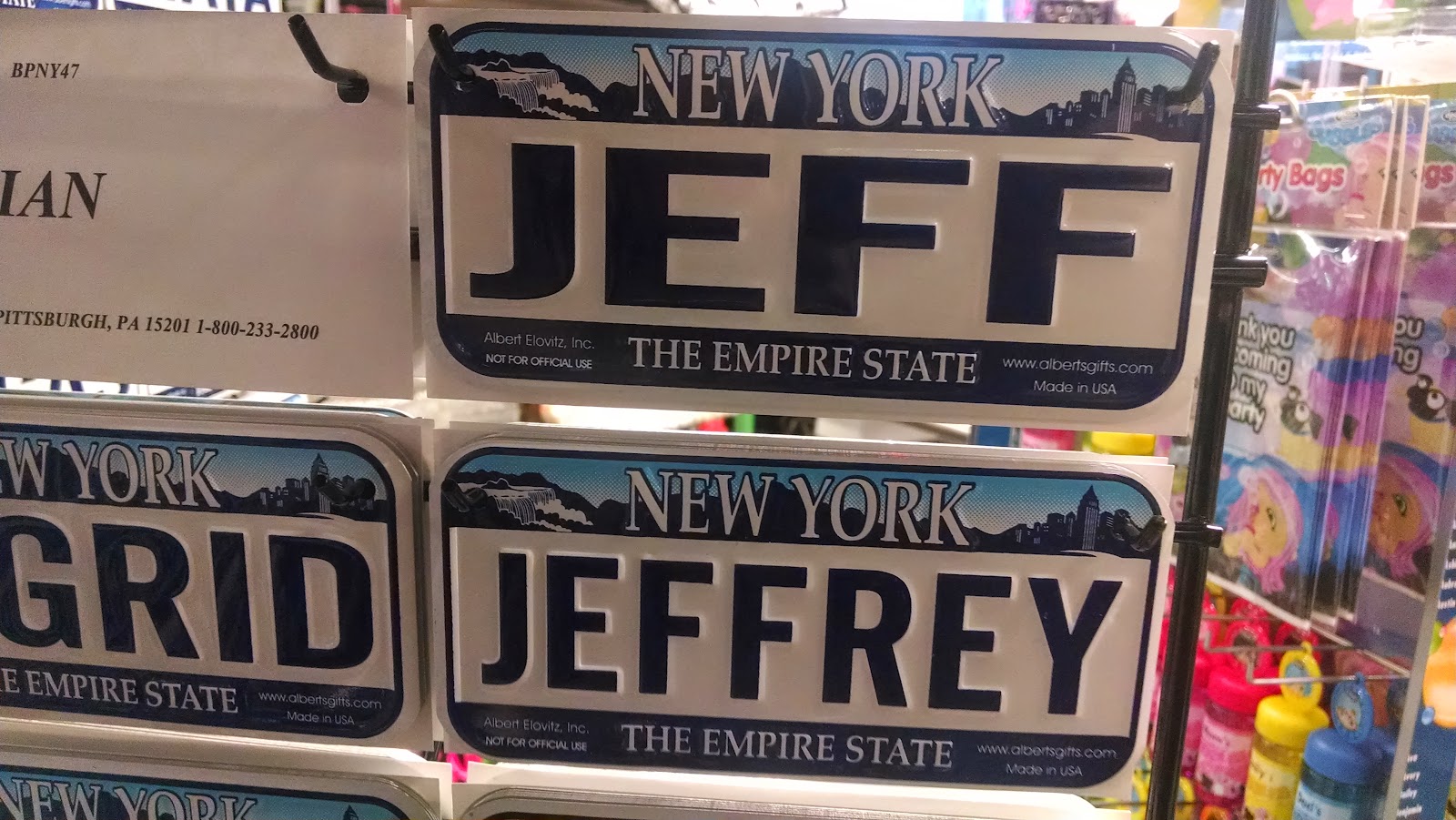 There was a time (my childhood) when it used to be hard to find my name on license plates. I credit the phenomenal celebrity successes of Jeff Daniels. But, seriously... does anyone remember being friends with / knowing a Jeff before going to college? Because that was my case. Not a single one until I matriculated, then it's nothing but "Jeff", "Jeffrey", and "Geoff"s.

Anyway, back to the license plates: Man, I would want one of these so bad if A) I were 7-15 years old or B) had a bike. (NOT mutually inclusive.) It's only now that I'm realizing these are the last-gen version of NYC license plates. What fool is going to buy last year's model?! Looks like I (Heart) NY Gifts is going to be stuck with a lot of unsellable stock for some time.

Speaking of the name: On Official Papers, is the store name spelled out, or is there a heart emoji in the middle? Since business licenses are a matter of public record, I could find out. I could ... MOVING ON! 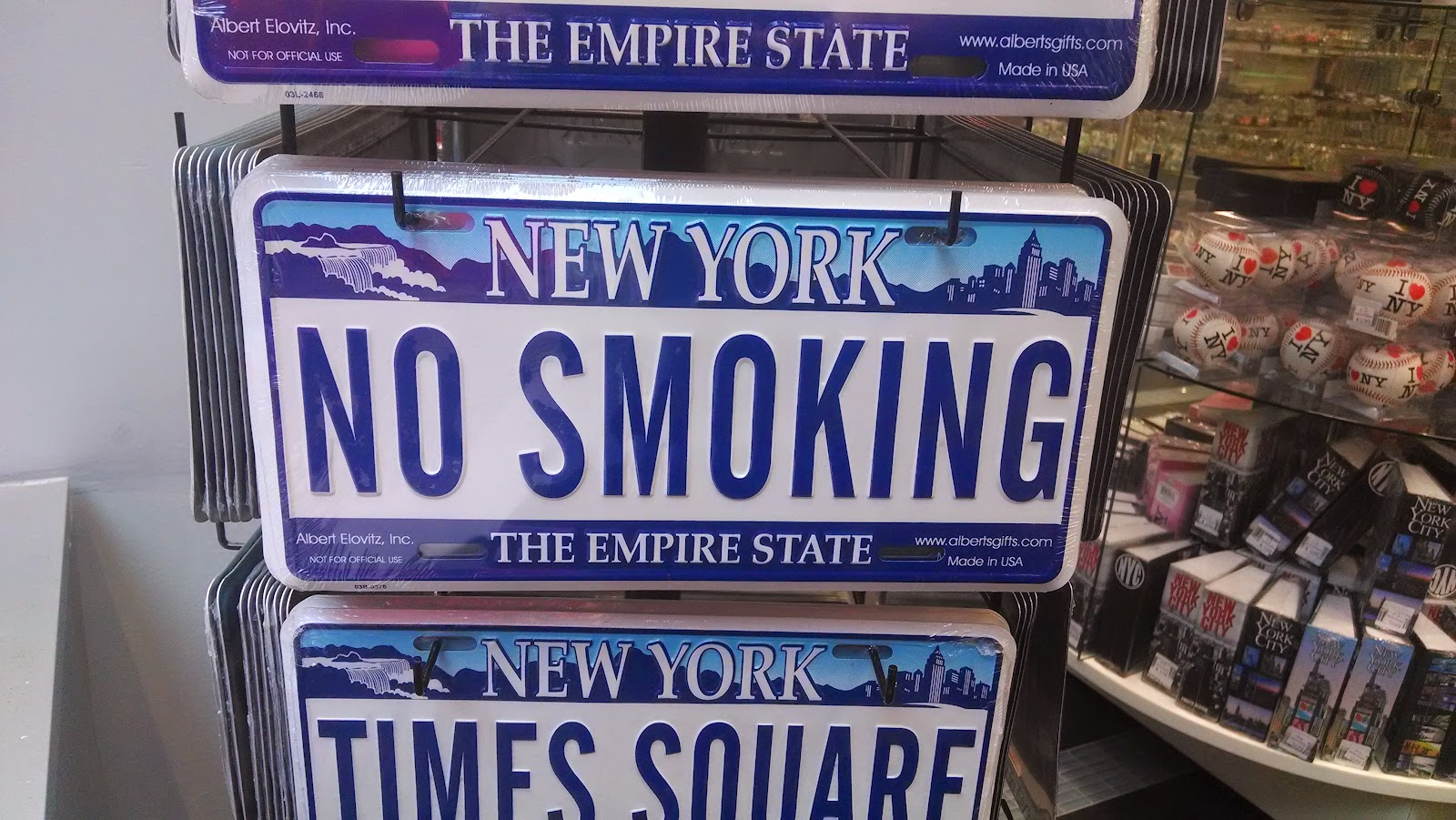 I "get" most of the personalized license plates (and there were many, many different kinds / shapes / sizes around the store), except a few. Notably, this one for "NO SMOKING". Because ... it's a license plate. It says, "I love cars, New York, AND abstaining from nicotine!" This is a VERY niche product. If you know of someone who whom this gift would be perfect, please don't tell me. I like the mystery.

One thing I've noticed: These tourist-trap shops have gotten much more "adult" since I was a kid.
Pretty sure if any souvenir shop sold a license plate that simply said "BITCH" on it (not pictured), my parents would never have taken us kids into another gift shop, for as long as they could control which shops we went into.

Though, I DO clearly and distinctly remember a gift shop at a cave attraction we went to, once. It was the old school type that was filled with a lot of varnished wood plaques that either has sayings engraved on them ("Bless this mess!") or had an ashtray set into them. One of the items for sale was a lacquered piece of wood with a little round inset, where one could rest their drink. Overtop this was a rubber Pluto (the dog from children's Disney cartoons) with his leg lifted. When a tumbler - like the kind your 1950s dad would drink his Box Car out of - was placed on the indent, it would looks as if Pluto were whizzing into it. I did not point that out to my parents, for fear that I would never be allowed back into a gift shop ever again, but the memory stuck with me. 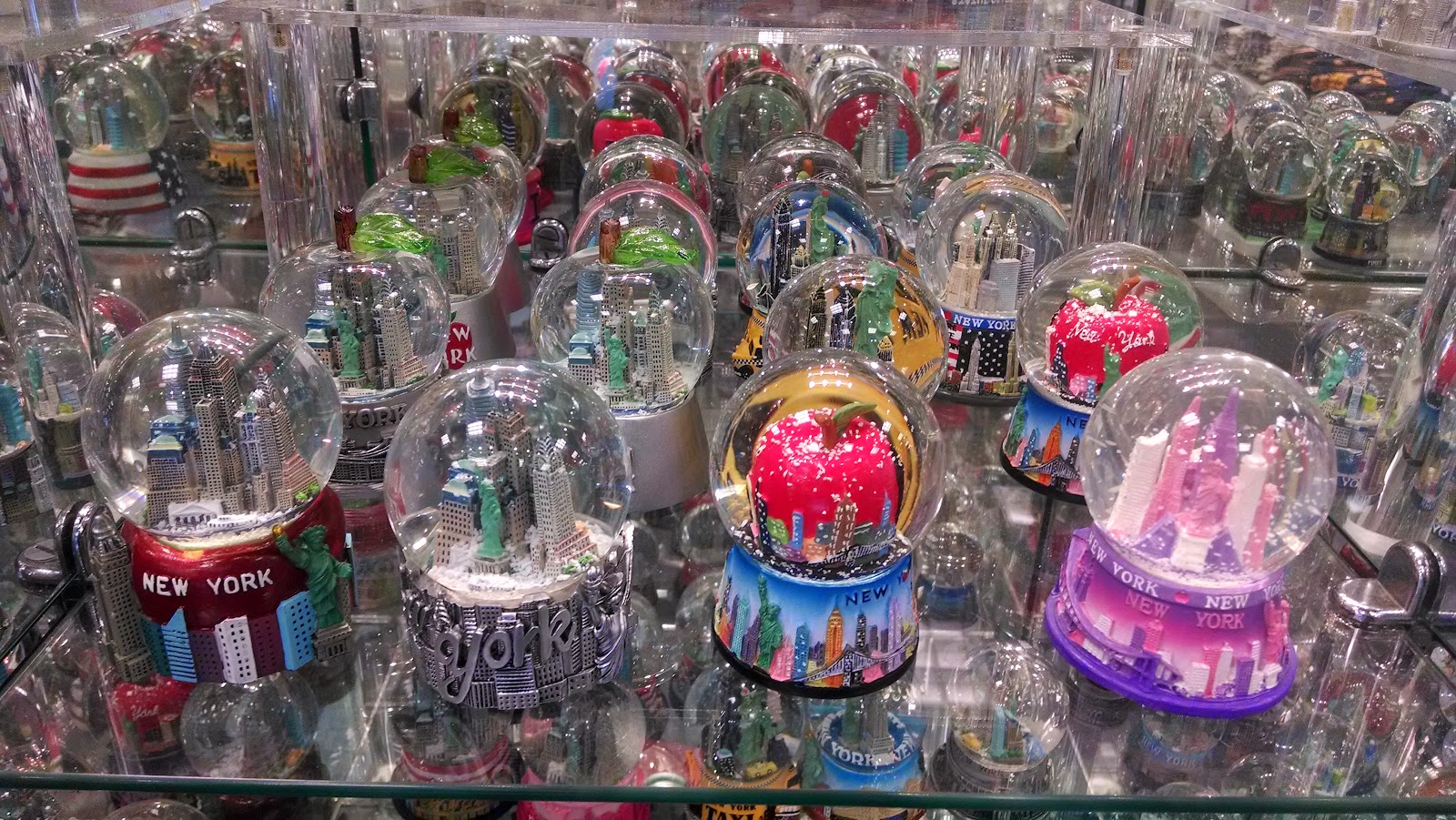 And here's another display that made my "lots of stuff" nerves tingle. Is there any other single item that screams "city souvenir" more than a snowglobe? And they all seemed to be the correct size to take back home on the plane (larger ones being banned by the TSA, for being "too dangerously nostalgic of your non-home town"). I wanted to stand there and shake every single one and pretend to be the kid at the end of the last episode of "St Elsewhere". (I know what I just said, and I don't care!) I only wound up shaking that hot pink monstrosity on the far right (or "stage left", since we were on our way to "Phantom"). It's pink because it's for girls, right?

And that's it! That's my tour of a tourist trap.
I leave you with this: 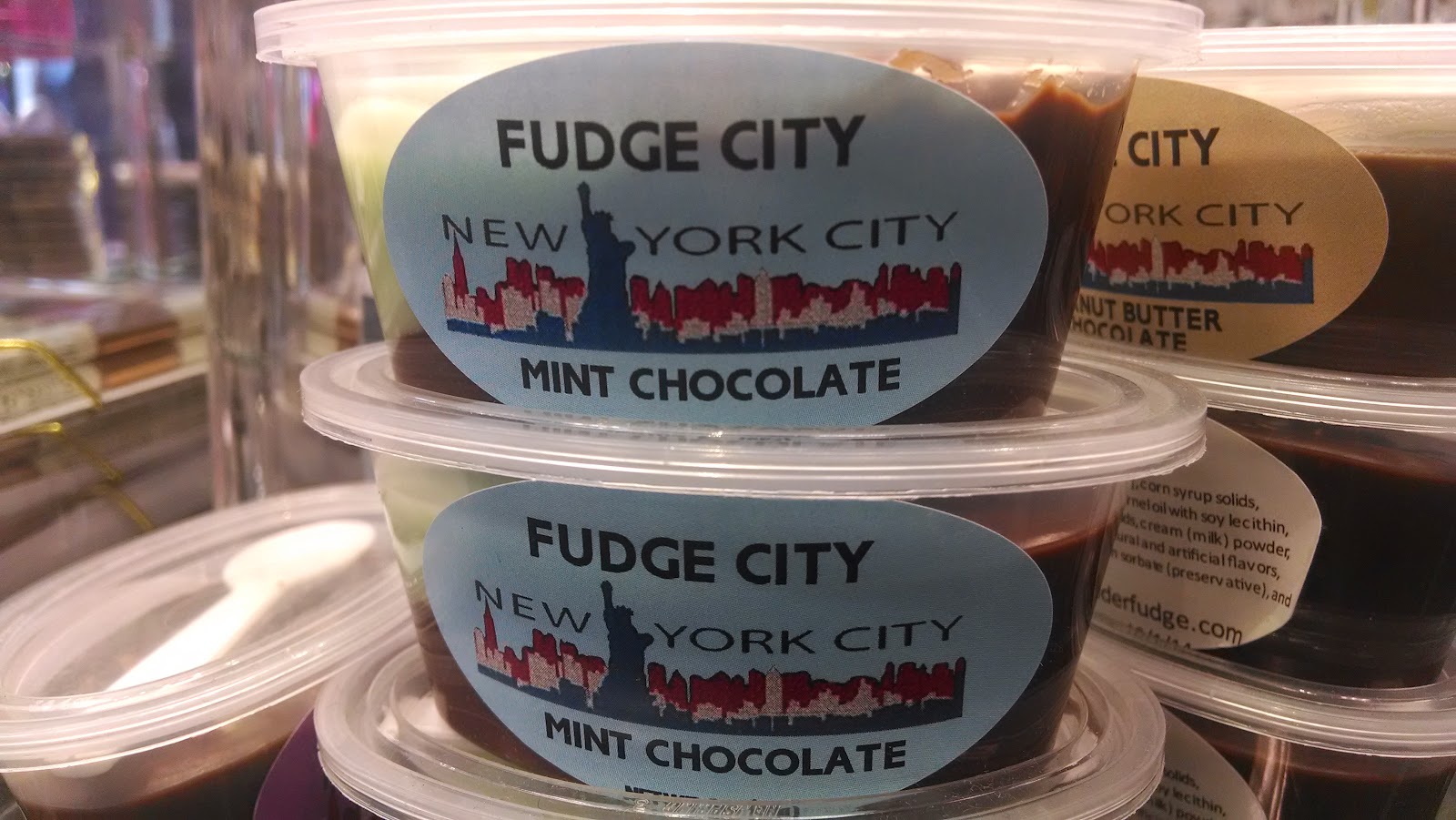