Get excited, everyone, because you're about to have a peek into my mom's glasses cabinet.

Whenever I say things like "my mom's [whatever]", I feel like I'm giving the impression that my parents are divorced. They're not. I just feel like the contents of the cupboard that holds the glasses is strictly under the direction and purview of my mother. My dad could give a fig what's in there, as long as it holds water when he needs it to hold water and tea when he needs it to hold tea. I'll test this by swapping out all of the glasses and mugs with those little ice cream helmets you get at baseball games. His life probably won't change ... except it'll be 100% more awesome, as he drinks water and tea from a Mets hat.

Also: We're all clear that I'm talking about drinking glasses and not "spectacles", right? Otherwise, this post is about to really confuse you.

Now tighten your seat-belt, because here we GO! 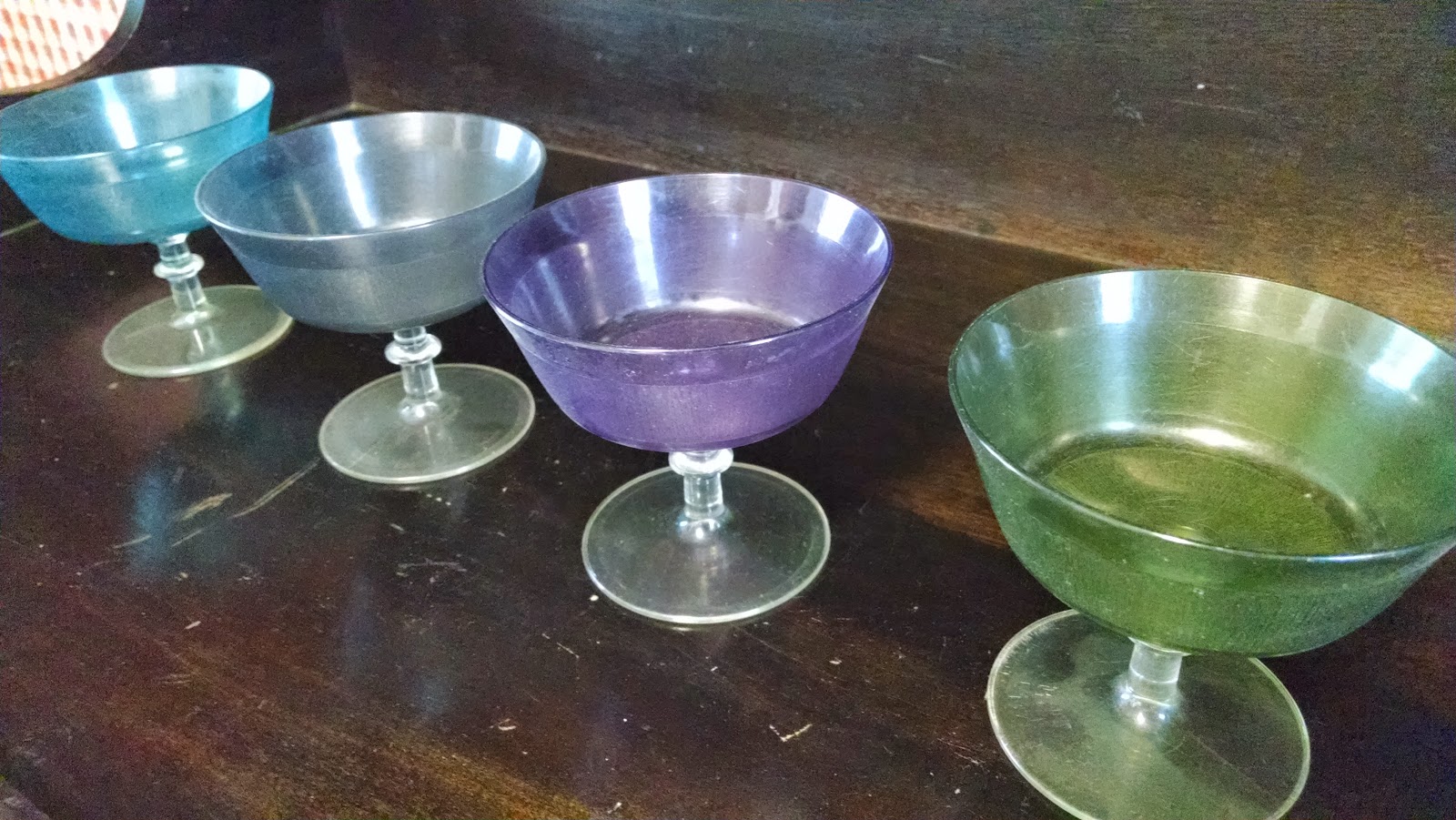 Right off the bat we're off-topic, because these first items aren't even glass, but plastic. When will my lies stop?! They are sundae cups so old there's no way they are not 100% BPA. I don't really remember these, from back when I was a kid, so they're probably actually my grandmother's, and are now living with my mom. I've never used them and thanks to a building lactose intolerance, I probably never will. I wouldn't be afraid of the BPAs, though. Pretty sure I've drank enough Bisphenol A - or (CH₃)₂C(C₆H₄OH)₂ - to give me cancer-of-the-something, already, so a little more won't hurt. 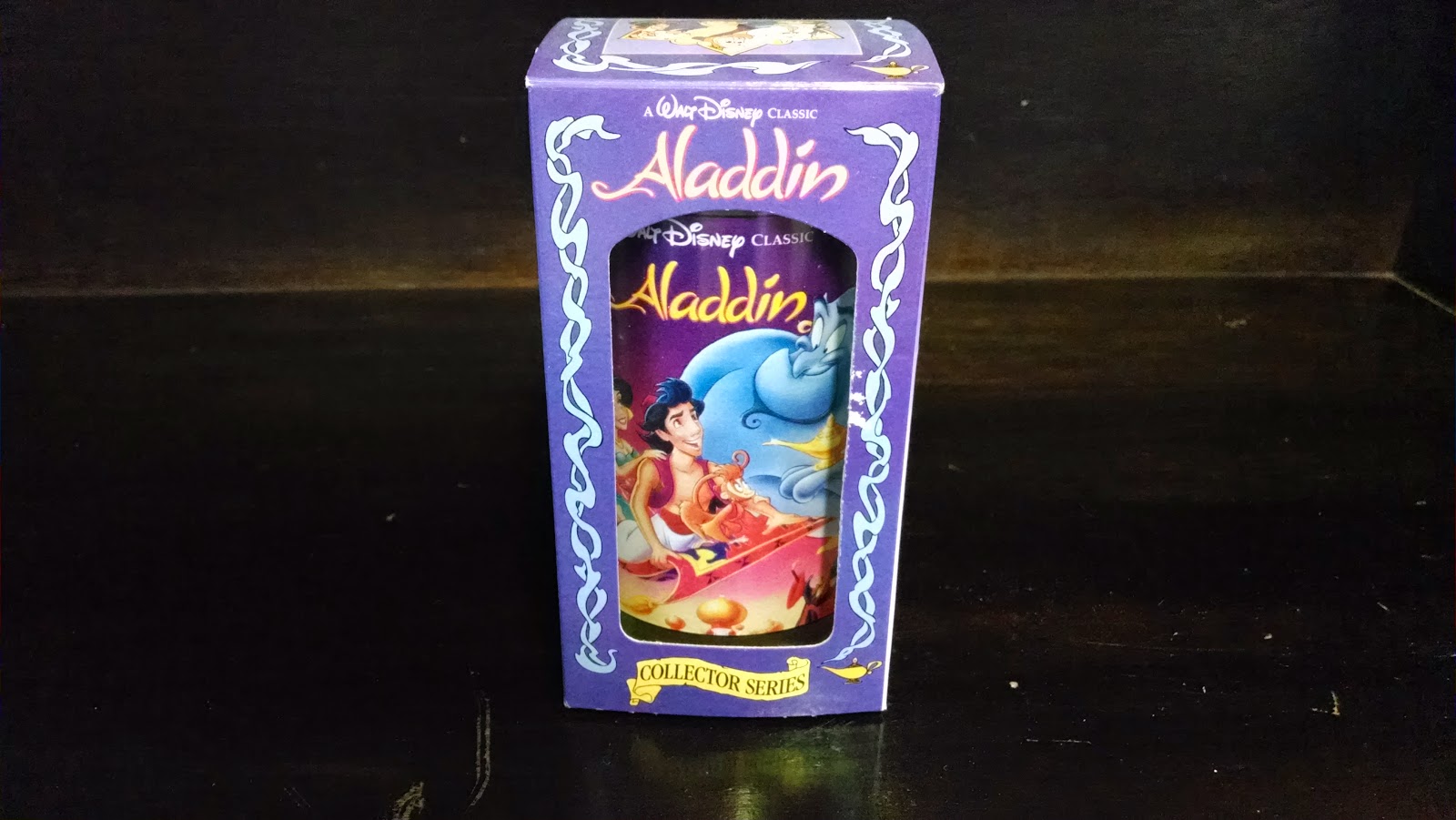 Straight outta 1994 is this Aladdin "glass" (yup, another plastic cup) that was sold at Burger King. It's part of a larger series of glasses that featured various Disney movies, so that explains why the glass was on sale two years after the film was in theaters. Nice to see my mom has kept it in it's original box and in such great condition. Does she know she's sitting on a gold mine that could fetch upwards of $100 on eBay? Wait. Typo. I meant to say "$10". Totally worth hanging onto the box and never using the glass for 20 years. We probably paid $5 for the thing in 1994. Guaranteed to appreciate in value.

I mock, but I'm pretty sure it was at my insistence that she never threw away the box, because of "collector's value" or something. I was big into "mint condition", back then. 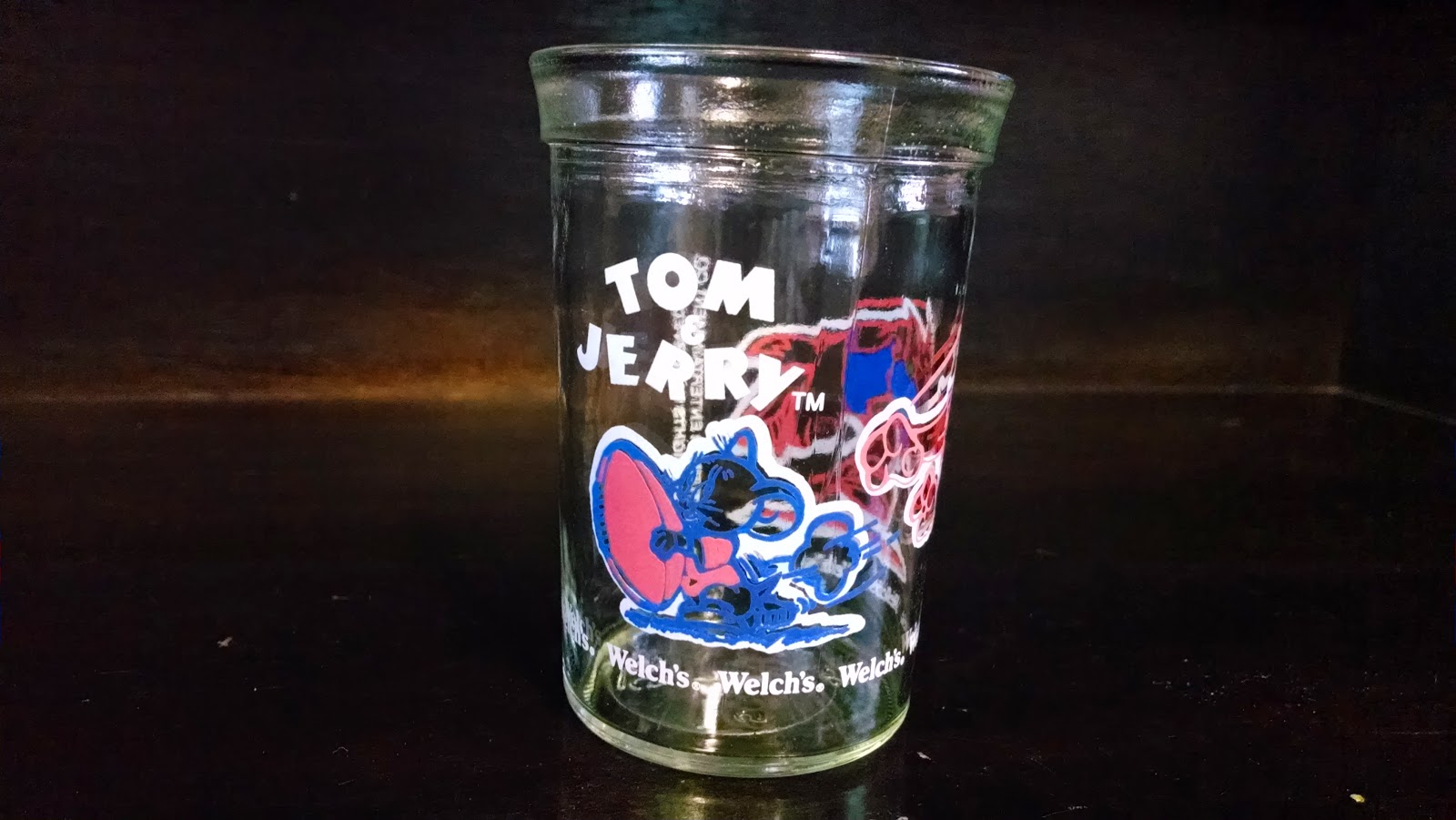 Since taking this photo, I have seen how other people insert a rolled up piece of white paper into the glass, so you can see the graphic clearly. Too bad I already took all these pictures and I'm not doing it again, the "right" way.

So this is a Welch's jelly jar for 1991. Once filled with jelly, families were encouraged to eat all the pectin-packed grape-spread, then give the container a second life as a glass. A persnickety kid, I swore it always make whatever liquid was poured into it taste "grape-y", so I never used it for it's second purpose. Even though it was probably at my insistence that my mom bought this "glass" in first place.

One other memory: The TV commercial for these had a kid annoying quipping "Tom and JELLY!" It was so annoying, that I have never forgotten it, nor passed up an opportunity to make the same pun, myself. 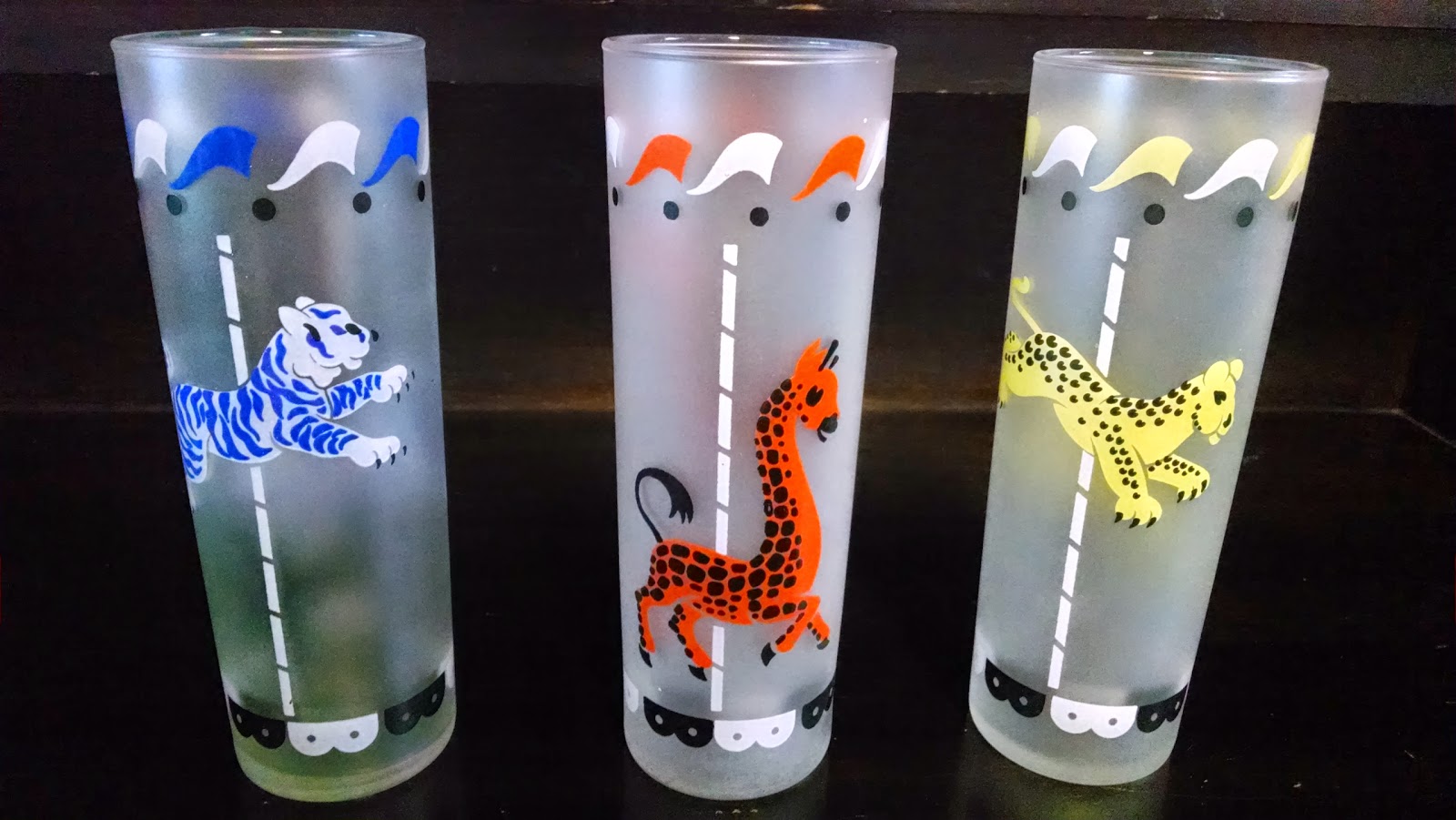 Here we go! Now we're getting to the good stuff! One of my most cherished childhood memories ... that revolved around glassware (what, you don't have drink-wear-specific memories? You must've had a terrible childhood!) We'd use these as "float" glasses. Exclusively. Oh, what salad-days! It sounds so bourgeois to have glasses just for ice cream sodas, when there are children starving ... somewhere. Anyway, we also had these really looooong, plastic spoons that we'd use with them. With the spoon-y bit of the spoon bent at a 90-degree angle, it would get trapped under the ice cream, so one could pull up on the handle to raise the ice cream to edible height, then dunk it back down to create more foam. Ah, ice cream float foam. It was from these glasses that I first realized I loved the taste of that foam. *Wistful sigh*

There used to be a fourth in the set - a green zebra - but it broke many, many years ago. Probably NOT my fault, but possibly was. History does not record. Anyway, just recently, I saw the entire set in the window of an "antique" (junk) shop in Brooklyn and they were charging $45 for the complete set of four. It was a bit expensive, just to get back a little bit of childhood nostalgia. Plus, the store wasn't open yet. Plus, it was hot out. So, I wasn't going to wait around in the sun, just to overpay for a green zebra, sorry. Nostalgia will nly take me so far. Inconvenience and sun-stroke is too far. 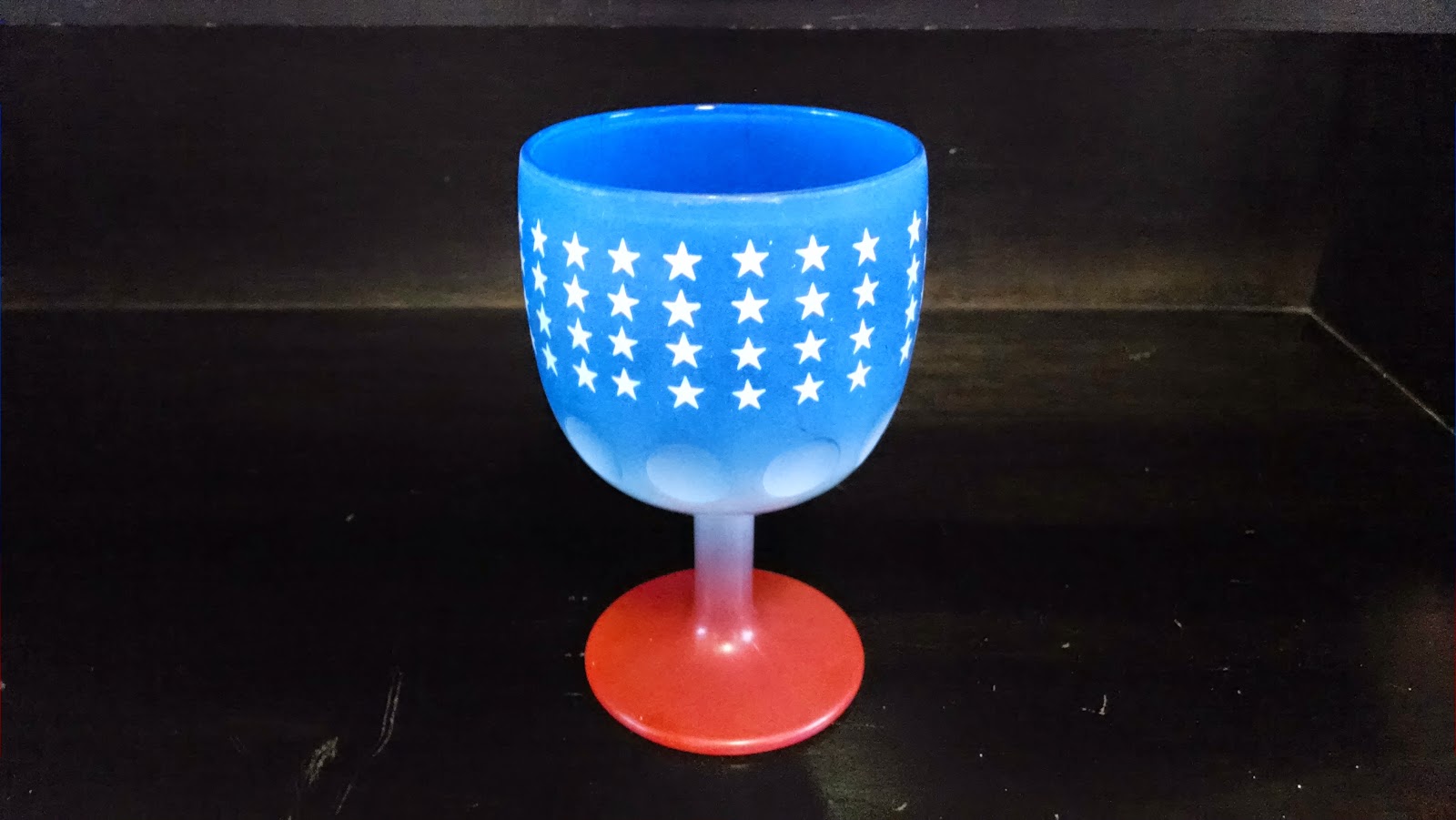 Americanna. This one was also often used as an ice cream dish back in the days before "lactose intolerance" was a diagnoseable thing and kids were constantly fed iced cream, regardless of how many mysterious stomach aches they'd suffer immediately after. Such benighted times. Such great ice cream sundaes.

I never knew the story of this glass until I was taking these pictures. But first, "Why do you want to take pictures of my glasses?" said my mom. "I dunno. For posterity! To document! To remember!" "...eeeeeeeeehhhhhooooooohkaaaaaay" she said. "Where did you get this one?" "You father won that for me at a carnival."

I never knew! He only won her the one, though. Still, it seems to have worked out for them, in the long run, as they're still together. Guess mom's overlooked that single-glass gift. I never could. 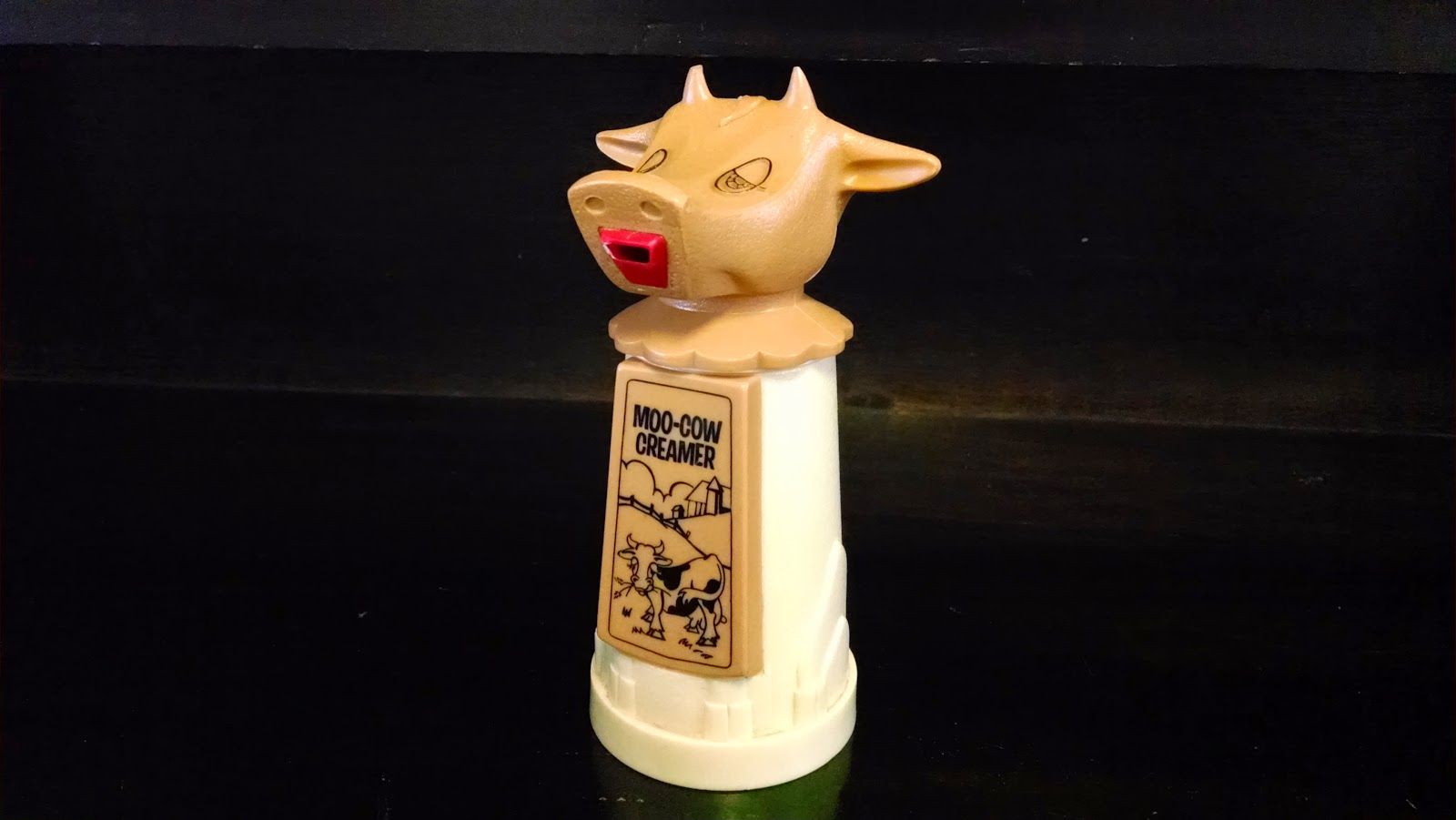 Another not-glass, but just thought you should all see this thing. You put cream or milk inside, then, when you want cream or milk, you grab this thing, pretend to make a horrible "vomiting" sound and pour it into your cereal. Then your mom asks you to please stop doing that. THEN you wrap your mouth around the cow's mouth and suck milk from it like a sports bottle. THEN you get another mysterious stomach ache - the doctors are baffled!

NOT pictured are the set of clear Nestle coffee mugs that look like mini globes. I'd totally forgotten about them until the other week when I was visiting an antique (junk) market and saw them being offered for a ridiculous amount. When did junk become something you overcharged for, rather than just something you wanted to just get rid of, and were glad to take a quarter for?! My mom has a set of 'em and she'd probably sell them for 25 cents each ... but I would never let her. They are worth so much more than that!!! THEY HAVE MEMORIES!!!