July isn't even over! This is the time that stores are supposed to be putting out back-to-school stuff, so I was dead chuffed (that's British for "I'm the type that sprinkles British slang into my speech, but please still respect my opinions") ... I was super pleased to find a Halloween display so early in the season. Though, I guess Cracker Barrel isn't much known for their "back to school" items, so, unlike other stores, they don't have to give any shelf-service to Trapper Keepers or mechanical pencils and can get right to the good stuff.

For those who don't know what Cracker Barrel is, it's a restaurant that sells cheap food in huge portions. Though, to keep expenses down, everything that comes with your meal is served on its own plate. Oh, you want steak with a side of potatoes and, well, knowing the clientele, MORE potatoes? Here's your plate with a steak. Here's your first potato. And here's your second potato side. Who asked for lemons for their water? Here is the plate for that! Now, can I refill that gallon of sweetened iced tea for you?

But why, if I'm throwing such shade its way, was I at Cracker Barrel at all? Because when you're flying down a highway at 70mph, there's no time to casually peruse what POI food options the GPS is suggesting, because by the time you've browsed, you've passed them. So, with one Cracker Barrel at every exit, it was easy to make the choice of just pulling into the one that is 5 miles ahead (since we just missed the one that was 1.7 miles behind us).

Plus, my parents seem to like it. And it IS a good "value" ... as long as your definition of "value" means "I don't care what it tastes like, just as long as it's cheap and there is plenty of it."

But why am I talking about Halloween decorations on sale if Cracker Barrel is a restaurant? Because part of their "charm" is that they are also an "old country store". See, it's right there on their logo: 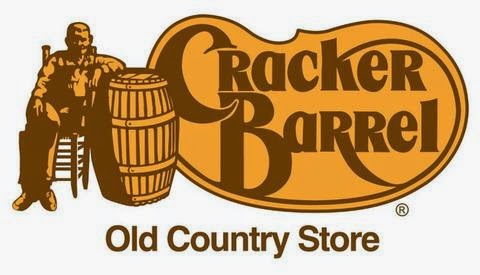 ...along with an old guy with weird legs. It's quaint. WAIT ... is the old guy wearing a Civil War confederate cap?! Probably not, right? Riiiight?!

In FACT, they sell so much of this other stuff that when I was in college driving back from a road trip somewhere, and before I'd ever eaten in one for realsies, my passengers and I got hungry. Seeing a "food this exit" sign I noticed Cracker Barrel and suggested we go. All of us walked in and saw the store section - and it's a big store section - and assumed I was crazy and that it wasn't a restaurant at all ... and left!

See, they put the hostess stand way in the back, past all the wooden ball-and-cup and golf tee peg games. I know this, now, so I headed right to the back and put my name in. As we were being seated, the hostess shouted (for probably the 300th time that day), "Today we're featuring our Campfire Chicken!!!" Then we passed a rather corpulent man who has a giant mound of aluminum foil in front of him. Inside the mound was a lot of food. I thought to myself, "I don't eat out of nearly enough troughs.

So I ordered the Campfire Chicken!!!


To it's credit, this was the first time I didn't feel horribly sick, after eating at Cracker Barrel (at least not right away), even though there was a suspiciously hair-looking thread on one of my potatoes. I let my beautiful wife convince me that it was a hair from a basting brush and not one from a diseased human scalp, so I was ok and didn't immediately vomit up the Campfire Chicken!!! (It's only now that I realize those brushes are made of horse hair, which is possibly grosser, but it's too late to vomit. The Campfire Chicken!!! is long gone.)

OH! You want pictures of the Halloween stuff?! Right! 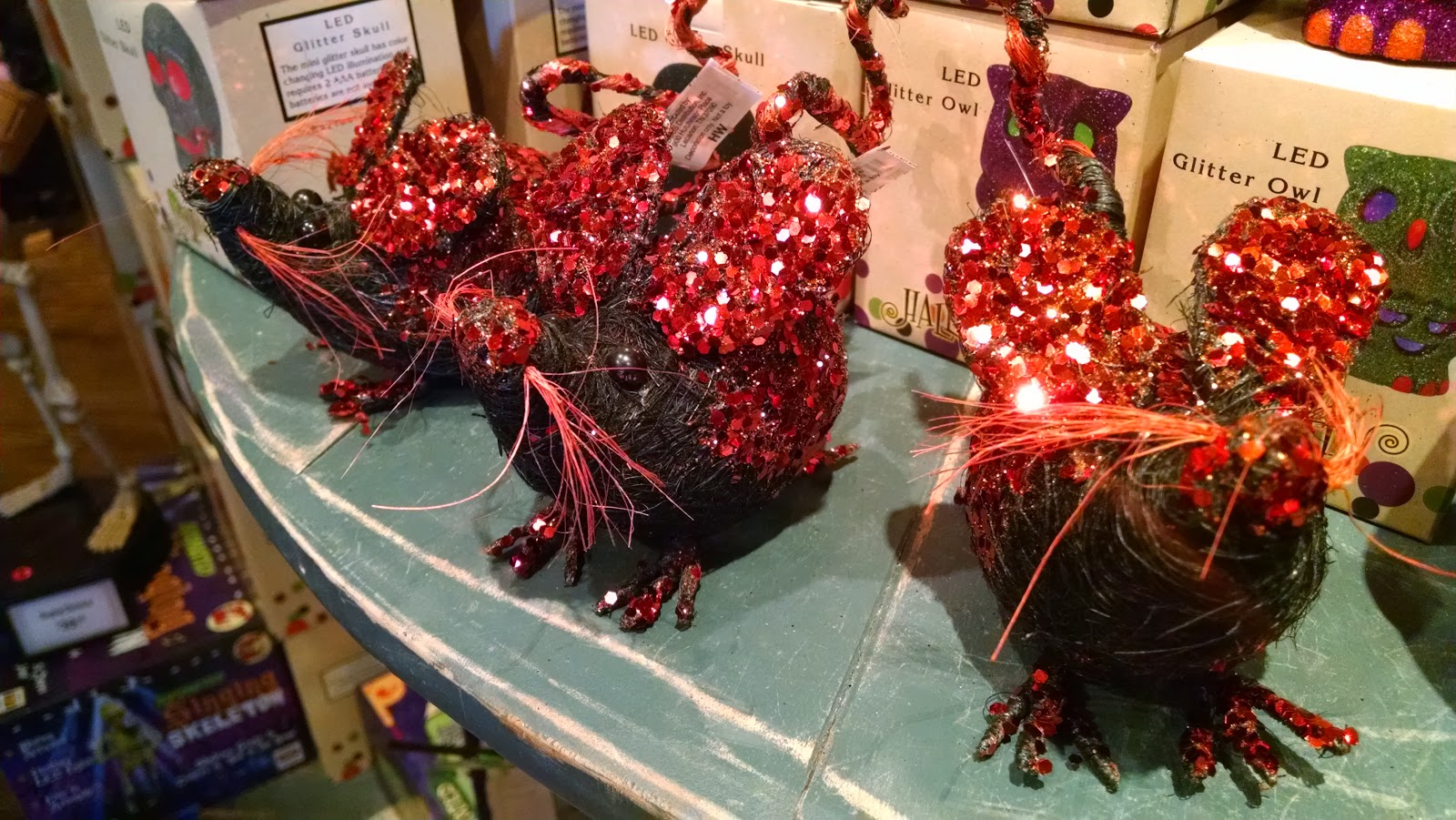 Glitzy Halloween Rats! Jazzed up and accessorized for October 31st festivities, these rats are sure to be the most glamorous way to contract Bubonic plague. ASIDE: What is it with holidays and glitter? So many good decorations are ruined by being covered in glitter. Oh, not these rats, no. They'd be a terrible decoration without the glitter. In fact, I might be so bold as to turn hypocritical, within this same paragraph, and say that it's the glitter that puts them above any other, similar, rat decorations. They're the exception that proves the rule! 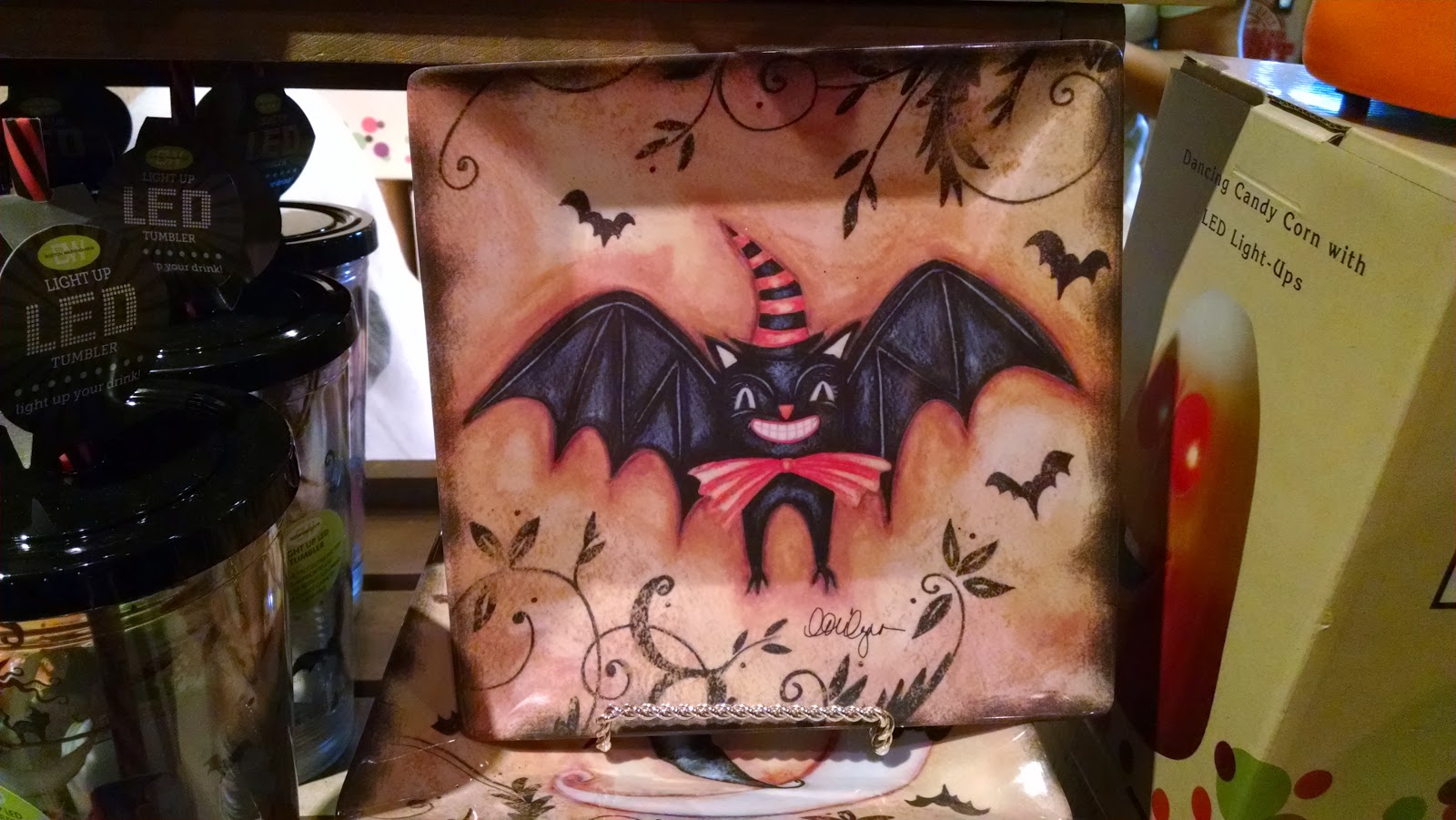 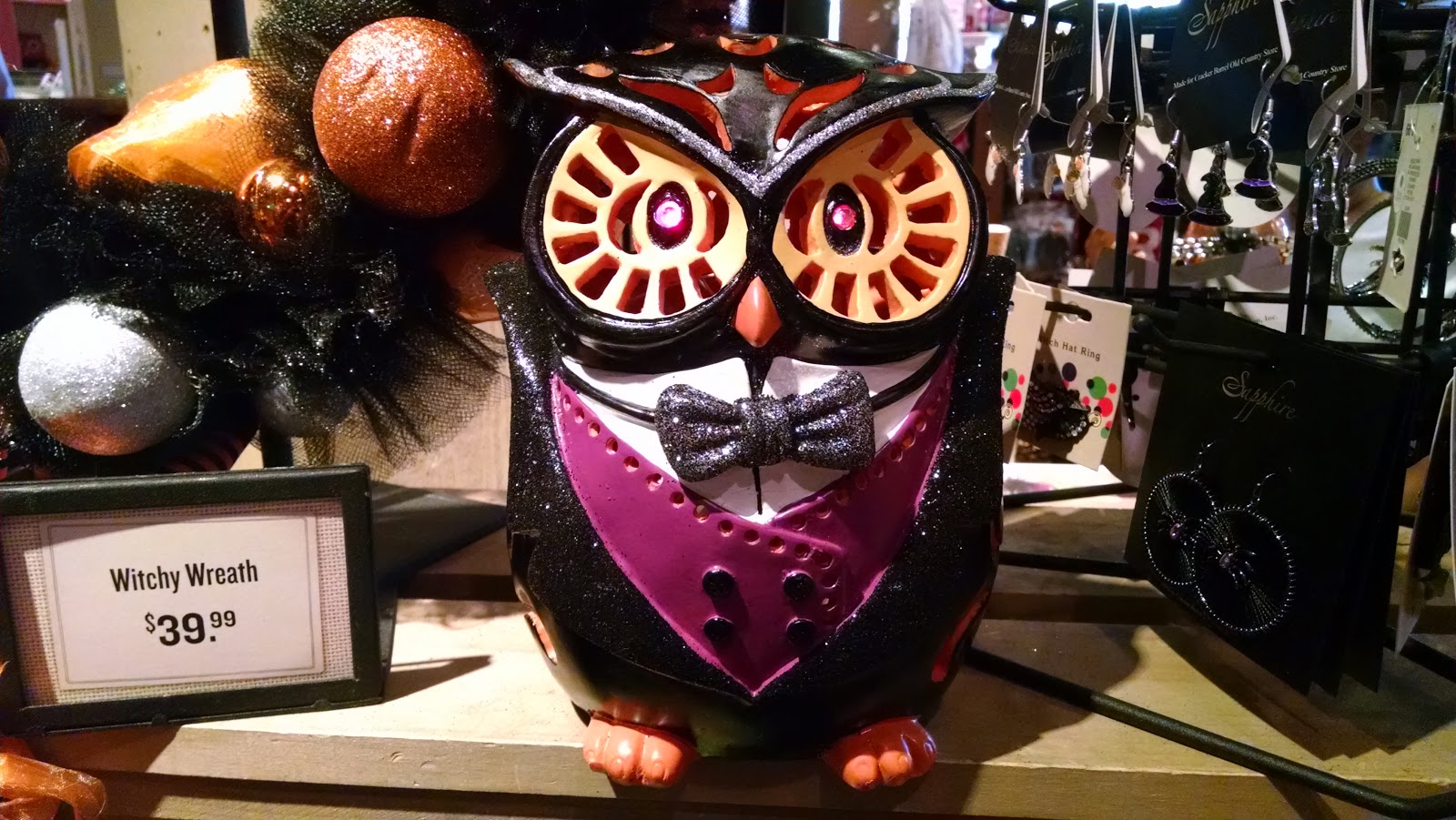 Classy Owl! I think he had a lightbulb inside him, but he wasn't turned on. ("Is that an owl in your pocket ... ?") Though, the way the eyes look, he could also have been a fan. I'd cool myself in the summer with Owl Eye Breezes. (Which could also be a good cocktail name. What would be in it? There's at least one liqueur. And fewmets. I'd cool myself in the summer with an Owl Eye Breeze cocktail.) PS - You can tell the "Witchy Wreath" is over-priced, without even seeing it, right? 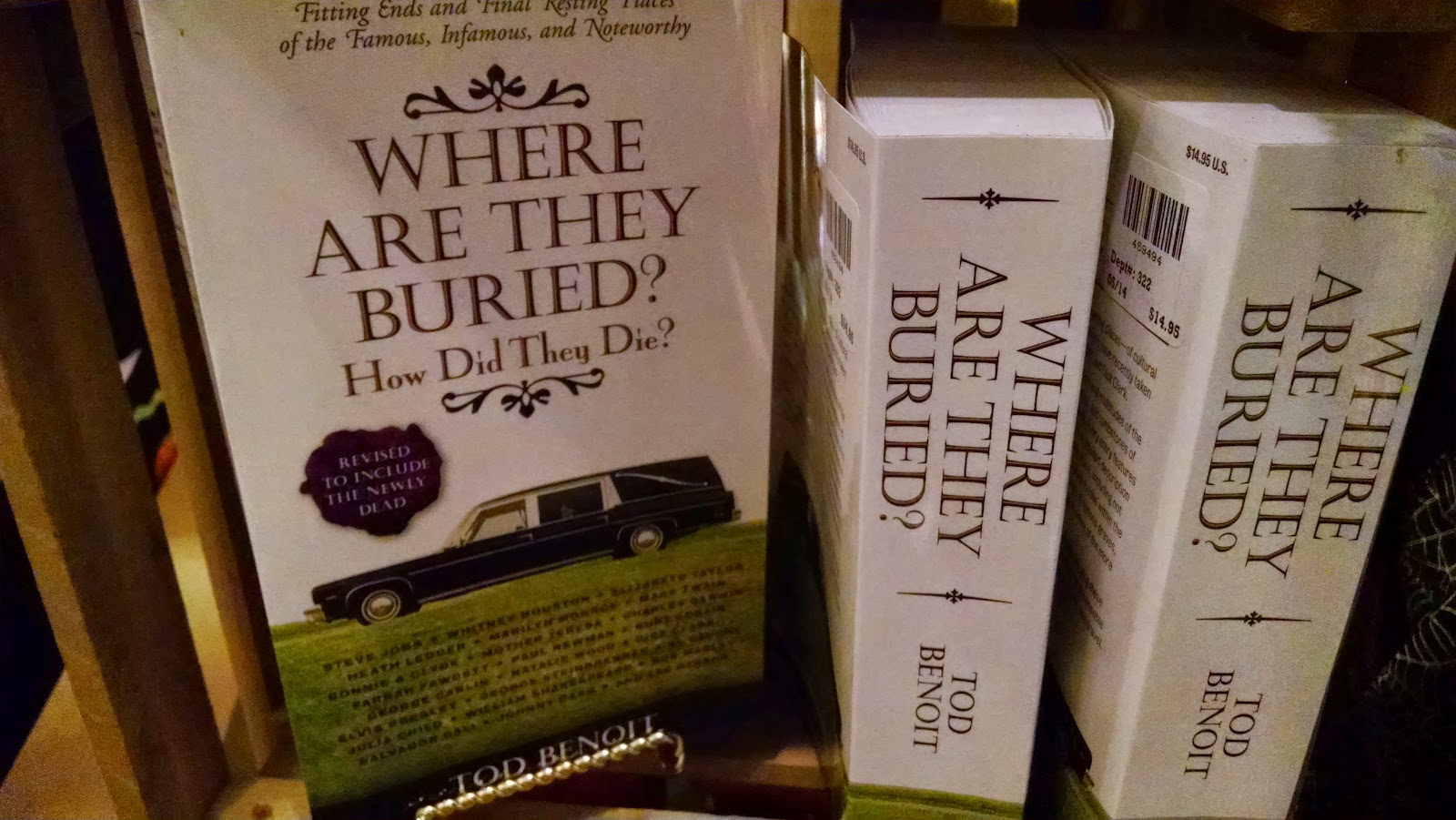 Where Are They Buried? How Did They Die?! Steve Jobs, Whitney Houston, and Heath Ledger are all included in this grim grimoire. It felt a bit "too soon-y" for my likes. Talk about the long dead, not the recent dead. Fresh corpses just seems so ... prurient. Sometimes we forget that these were real, flesh-and-blood people with hopes and dreams. (Says the guy who recently had a picnic literally on someone's grave ... but that guy'd been dead for almost a century, so it was ok!) 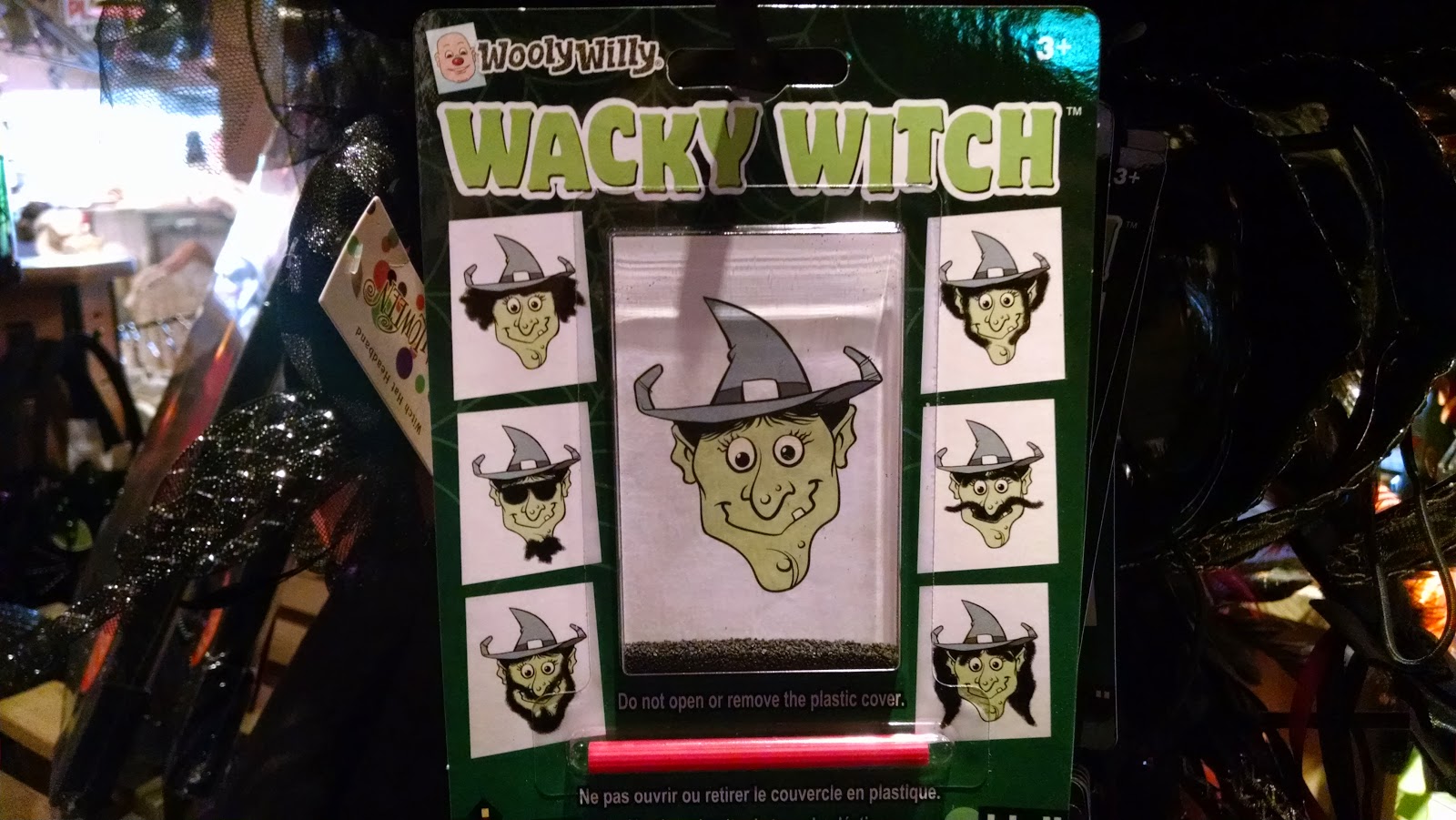 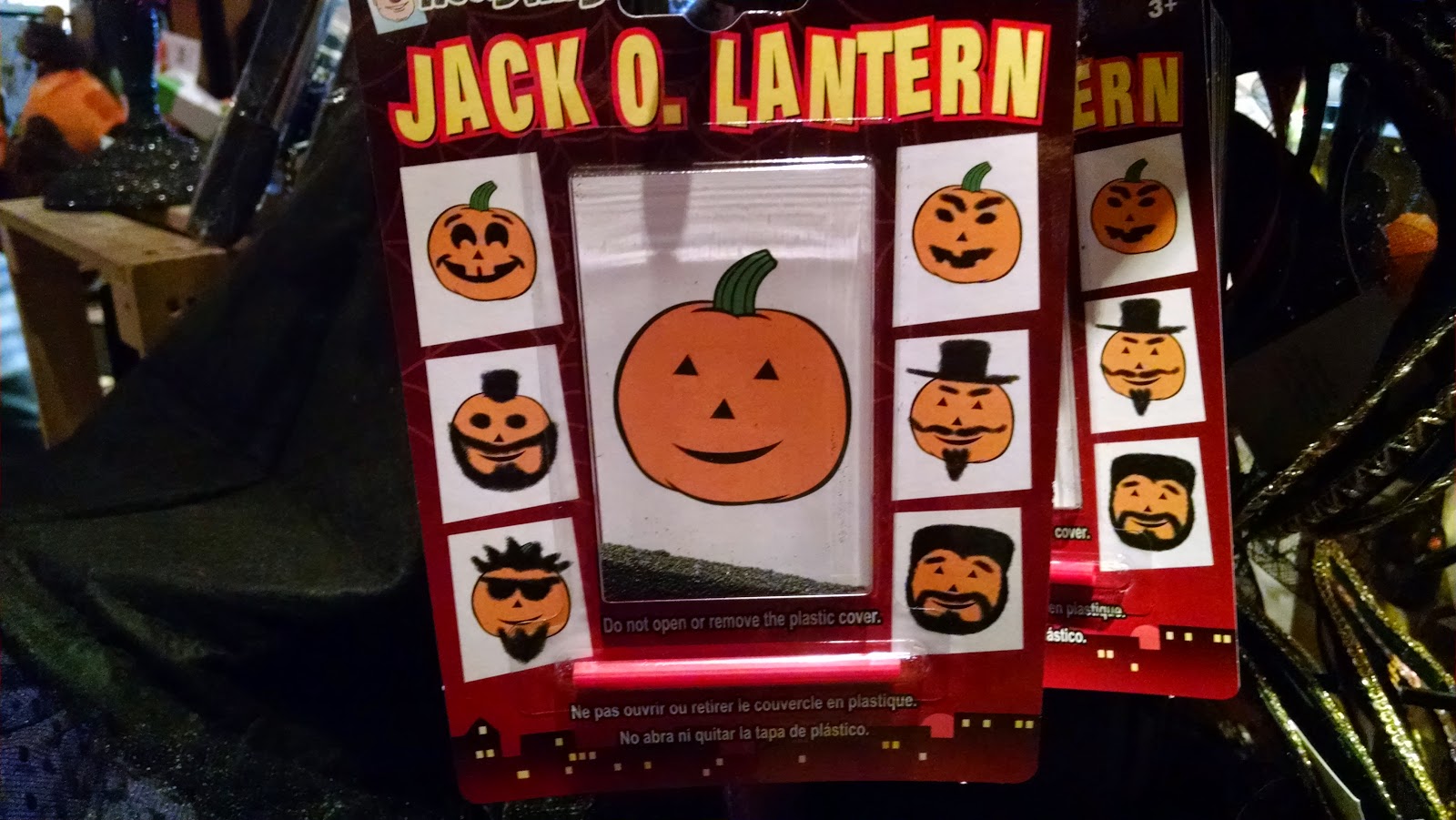 Wooly Willy Wacky Witch and Jack O. Lantern! Now here's the good stuff! Each was only $3.99 and I didn't buy either of them. Nether of them. Argh. This error makes me want to go back to Cracker Barrel to put right this mistake. Dr. Sam Becket, if you are listening, please Quantum Leap into one-week-ago me and correct this mistake. Or, you know, keep preventing wars, or battling the evil leaper, or whatever you do. No biggie, I'll cope. But, jeeze, how good would that look on a Halloween Mood Table?! 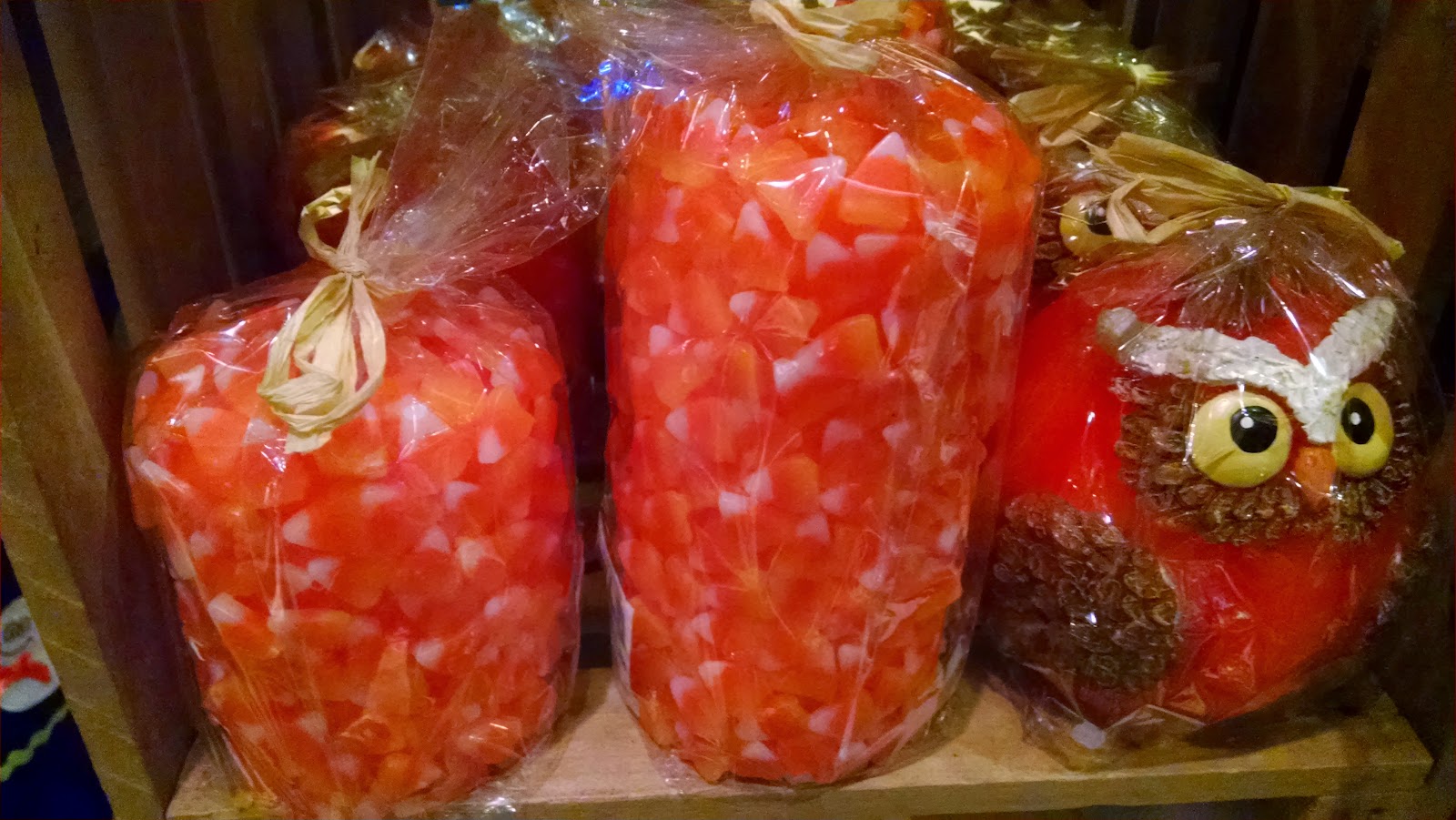 Candy Corn and Owl Candles! I couldn't tell, because they were well wrapped, but I don't think these smelled like candy corn. What a disappointment that must be to so many Cracker Barrel Halloween decoration shoppers. On the plus side, though, the owl candle didn't seem to smell like owl, either, and if this is an all-or-nothing candle-smell proposition, I think Cracker Barrel made the right choice.

I wanted to end this post with an Instagram video of a dancing candy corn, but I can't get it to embed.

Overall, it's the perfect start to the Halloween season because 1) it happened so pleasingly early and 2) because there was nothing that awesome on display, so I know my Halloween decoration-seeing has not peeked too soon! It's all uphill from here! (Up a windy, dead-leaf covered hill, headed towards a graveyard. Whawazzat?! Whawazzat?! Was that a noise over in that bush? Eh, it's probably just Snoopy.)