It's become a tradition that my beautiful wife and I make our way to Macy's to check out all the exciting new X-Mas decorations. And, being a tradition, it means we do it every year. This year is no different.

The difference between a tradition and the dull, drudgery of a predictable life is that traditions are based around holidays. But Macy's is anything but dull - in fact, the super-bright spotlights they used this year made sure everything sparkled with the light of a thousand suns.

We just went this past weekend (ticking off the first in a long list of holiday "must-dos", for me) and I must say, it did wonders to invigorate the holiday spirit. I'm ready. I'm ready NOW. Someone better give me a present to unwrap, stat, or I might explode.

"But Jeff, THAT'S Holiday Creep", you say?! Shut the hell up. For your information, visiting Macy's X-Mas floor in November is LATE for us. Normally we go in October. It's best to get there before the tourists have a chance to take it apart and leave behind nothing but a single, shattered ornament and shattered holiday dreams. I am not winning any awards for that last sentence.

Now, just so you know, this is not just ANY stupid old Macy's, this is THE Macy's. The one in Manhattan on 34th Street, where the REAL Santa lives ... in the basement, amongst the boilers, haunting teenager's dreams. They both wear red and green! They both appear in children's dreams! Santa had a secretary named Krueger and Freddy had a secretary names SANTA! They were both assassinated at the theater!

And now a visual walk-through: 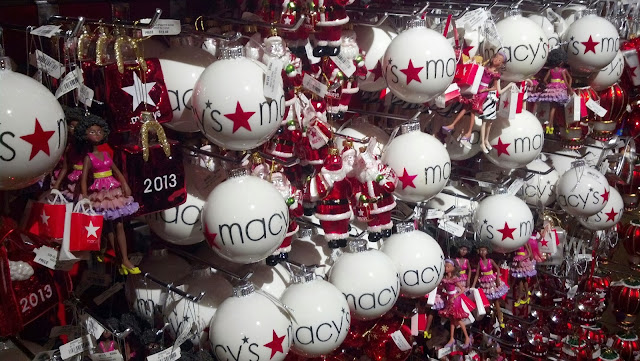 Here we see a bunch of branded ornaments. I love to think that someone out there has a tree that is decorated with nothing BUT Macy's-branded ornaments. Not just ones bought AT Macy's, but ones that have the Macy's name prominently displayed along with the year. "Oh, I love their 2013 ball ... but have you seen their 2005? Oh! Just the BEST!" 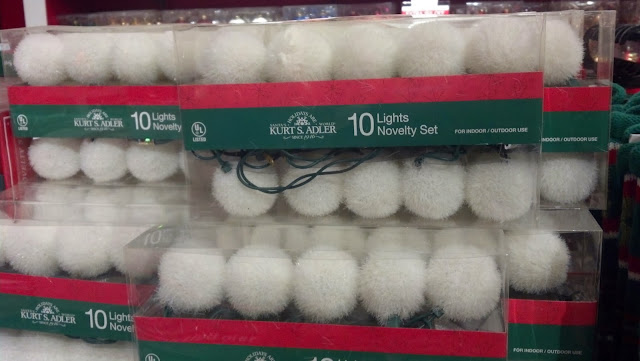 Fuzzy X-Mas lights. The thing that prevented us from buying three dozen strands was that each of the plastic boxes had a fine dusting of tiny white hairs. I hypothesised that the light's alopecia would end up all over our floors and be a nightmare to vacuum up. Once again, my rational over-thinking ruins a small part of something that should just be joyful. It's my X-Mas present to all who know me. 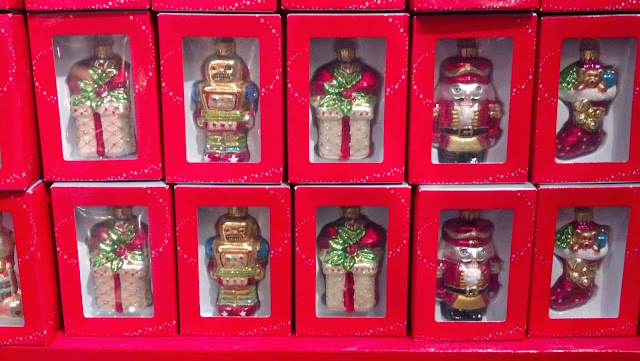 Overpriced glass ornaments! Tip: Even when I don't say it, everything was overpriced. The good news was that there was a 40% off sale going on - TODAY ONLY! If you know anything about Macy's, you'll know that there is ALWAYS a 1-day sale. If you buy anything for full retail price, something has gone horribly wrong. Even better? When you get up to the cashier, tell them that you "had a coupon, but you just can't find it". They will pull out a coupon from under the counter that will give you an extra 20% off. Guaranteed. I'm never one to try and pull these things, but Macy's just doesn't care. They throw around percent-offs like it's the Fourth of July. 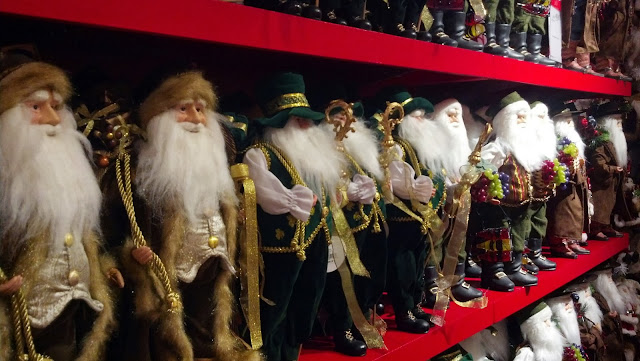 I was not going to include this photo of a row of Santas, but I think it highlights the terrible lighting. Look at how BRIGHT those Mr. Clauseses are on the right and how DIM the ones on the left was. Pin spots. I was waiting for the ones on the right to start singing. Also in this photo: If you look closely, one of the St Nicks is holding grapes. This is probably because it is a racist Santa. Think I'm kidding?! Think Macy's wouldn't be racially weird in 2013?! Look: 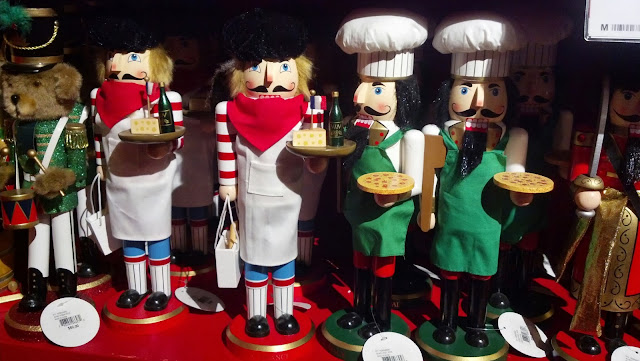 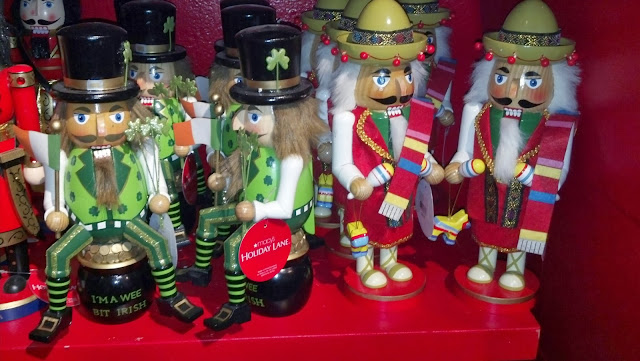 "I'm a wee bit Irish". I'm very surprised they didn't make the Mexican Cracker's sombrero over-large so that they could write something casually insensitive on there, too. Like, "¿Dónde están mis nueces?!" 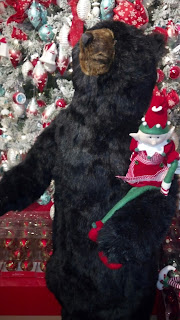 This bear was about 4-foot high. Not really sure why it's arms are splayed out to the side and its head is thrown back, like that. Possibly because it's trying to mimic Cyclop's (from the X-Men) "NOOOOOOO! WHYYYYY?!" pose? What I DO know is how that long-legged elf got on it's arm. My beautiful wife put it there. She did so with confidence and a look that said, "There. That's better!" And she was right! Immediately upon crafting the above scene, a Russian tourist family came over and all took turns having their picture taken with it. Honest. To. God.

The thing that pleases me most about this creation of my hers is that everyone who shops there AND everyone who works there is going to assume this was set up on purpose. No one is going to touch my wife's arrangement. It'll possibly lead to an argument if anyone does decide to buy the bear, though. "What do you MEAN it doesn't come with the elf?!" Fisticufs. It's a price I'm willing to pay. 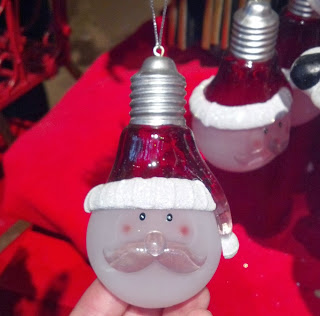 "I had a great idea for an ornament!" (Light bulb humor.)

"Pine cone with interdimensional portal". This style always reminds me of X-Mases of yester-year ... and that doomsday cone thing from Star Trek, too. X-Mas needs more SciFi weapons. "And, lo, the angel of the lord came unto them and said, "I'll be back!"." 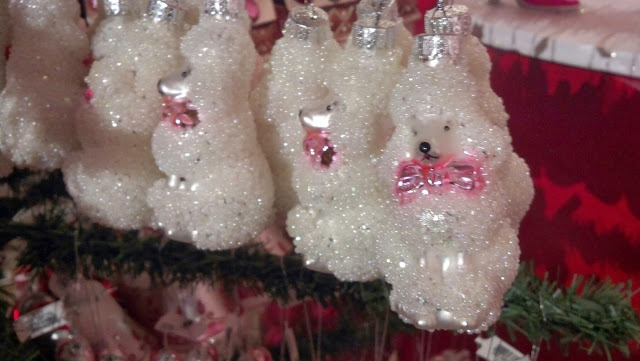 There were many, many ornaments aimed at what I can only assume is supposed to be the Carrie Bradshaw set. I am now weeping, because I remembered the name of the Sex In The City lady without having to Google. "While sipping my Cosmopolitan, it hit me! I needed a poodle on my tree. And I don't mean that literally!" (Then Carrie winks to the camera.) "KNOW WHAT I MEAN, LADIES?! SEX!" I have literally never seen an episode of that show. 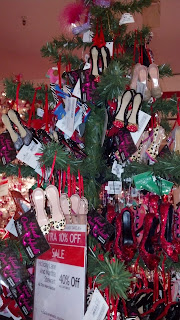 Literally a "shoe tree". More ornaments "for her", I guess. "Look," says a wife, somewhere, "You have TONS of ornaments for men on the tree, can't I have a pair of shoes?!" "Ornaments for me?" the husband asks, "What do you mean?" "Well, look at that manger one ... all those manly animals in there." (Wife sips her Cosmo.) 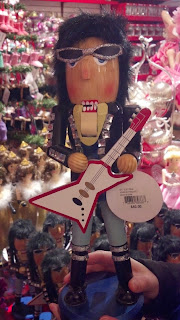 In case you felt like the racist nutcrackers were just not your speed, there's this one. Nutcracker? More like NutSHREDDER! Also: Nutcracker will be the name of AC/DCs X-Mas album, right? 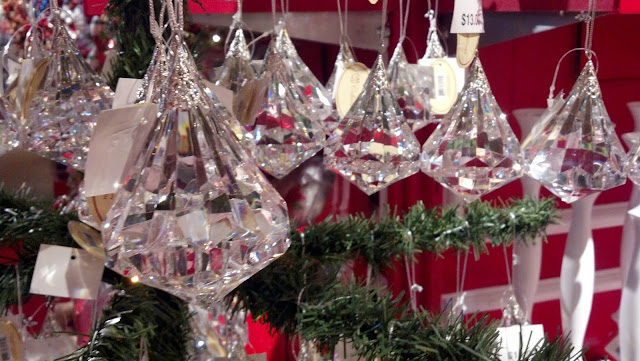 Cathead Crystals. Why "cathead crystals"? Because they're crystals ... BIG AS A CAT'S HEAD!
Seriously, they were enormous. These were the "bare" varietal, too. There were version that had fake mistletoe glued all over them. Surprisingly, gluing fake twigs to a giant crystal doesn't make them any less gaudy.

The sad fact is that many places that sell fake mistletoe now glue it to a giant crystal - or cover it in glitter - so such things are quickly becoming your only option. Especially if, like in the past three years, there's a blight that wipes out the fresh mistletoe market. (True story.) 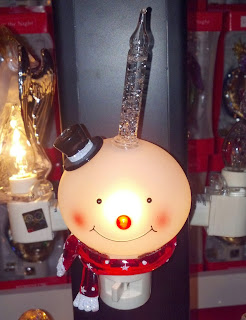 Good thing snowmen have no nerve endings, or I feel like this little guy would be screaming in horrible pain. Had it not had the Brain Spike, I might have considered buying it, despite my absolute revulsion to light when I'm trying to sleep. Night Light? More like NOT Light. heh. heheh. 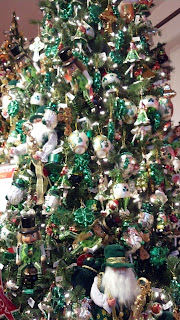 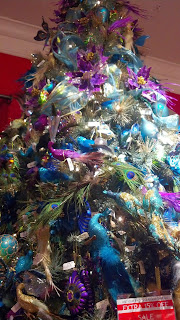 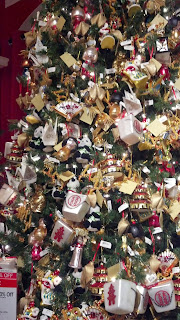 A triptych of trees. The first: An "Irish tree" covered in leprechauns, clovers, and (yes, seriously) beer mugs. This is because - fun fact - Jesus was Irish. The second is a "peacock tree" and decidedly not offensive to anyone but PETA. The third is a "Chinese tree" covered in panda bears, pagodas, take out containers!!!, and ... origami cranes?! "Screw it, it's all asian, right?!" said the floor manager. 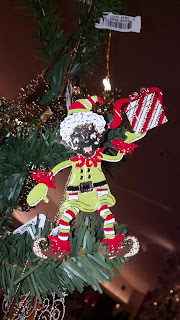 I love those intricately cut metal ornaments (not the terrifying one above, of course), but they're all so expensive. They are so expensive that they do not have price tags, nor are they ever part of the 1-day only, 40% off sale. I picked one up (again, not the nightmare above) and brought it over to those auto-pricing kiosks they have these days. $50. $50 for a snowflake made of sharpened metal. Some day I'll have that kind of ornament money, but not today. 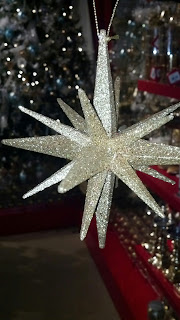 "This is an ornament replica of the spaceship that Superman came to Earth in." I make this joke every year. And yet my wife still loves me. Some people are unsolvable mysteries. 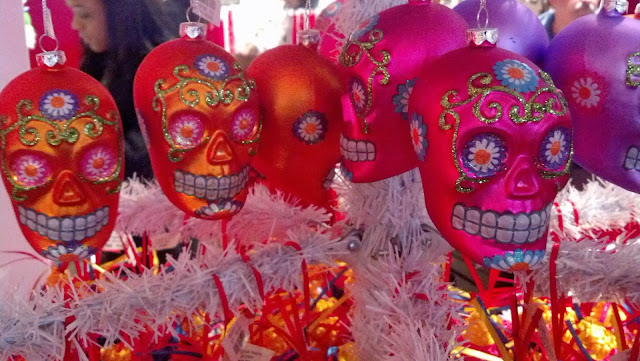 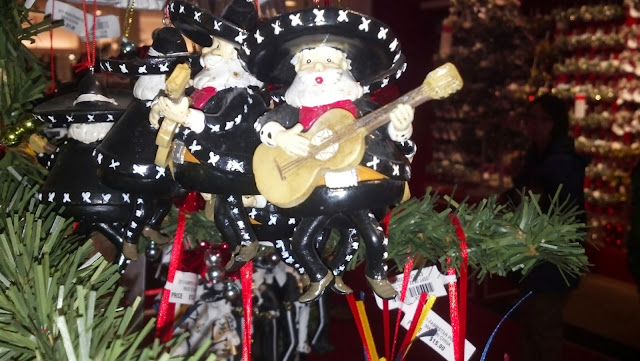 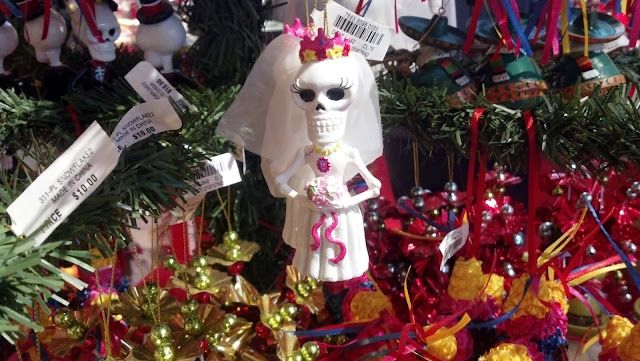 For those of you who like celebrating the Day Of The Dead a couple months late? 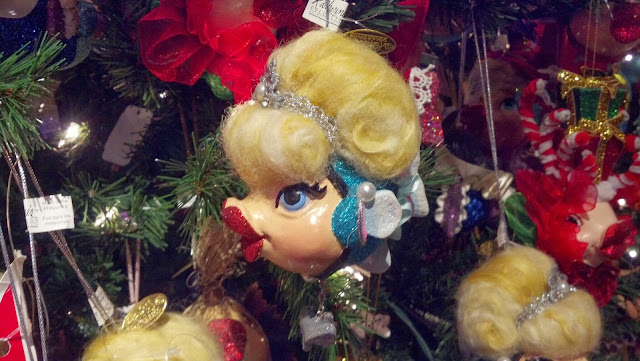 One of the more religious ornaments Macy's offered. (See, because it makes the observer exclaim, "Jesus H. Christ, what the f@ck?!") 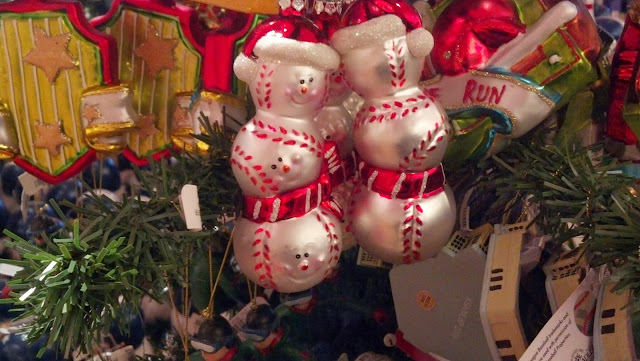 It's one thing being a another thing, being another thing! That's too many things. Be a baseball, a snowball, or a snowman. You can't have it all. 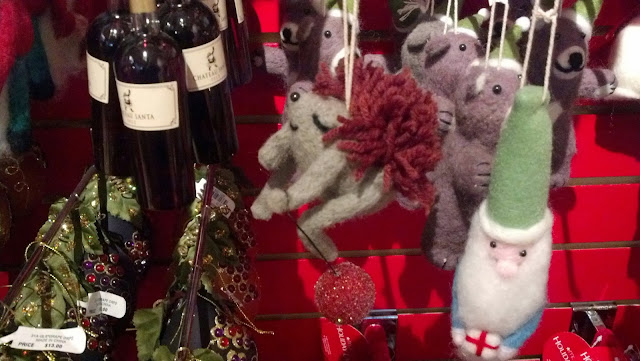 A hedgehog with scary-long hind-legs (is it a person in a hedgehog suit?!) holding a balloon. Also: I bought that home made-looking gnome for our tree. He will oft be mistaken for Santa, but he'll never be insulted when it happens. 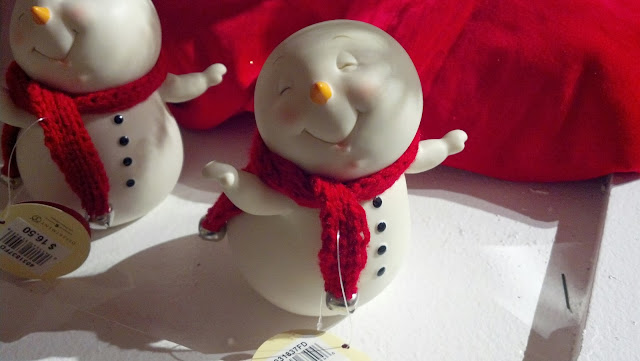 I have dubbed this guy "The Christmas Creep". "Wheeeee, I float into your brains while you're asleep and nuzzle your private thoughts! Sweeeeeeet dreeeeeeams!" *giggle* 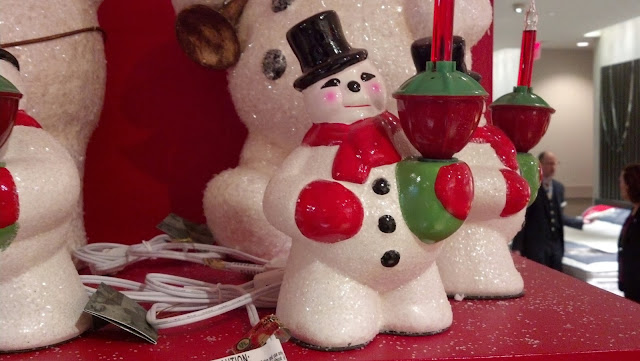 This is one badass, no-nonsense snowman. Even though it's not there, there is an implied cigar in his mouth. "Where yah want this, pal?" he asks, right before dropping the bubble lamp wherever he damn well pleases. 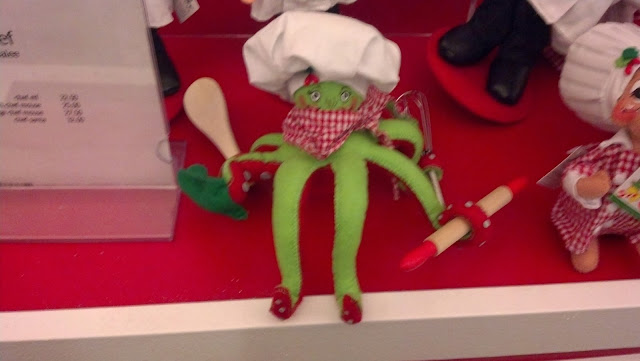 I'm not sure this was even supposed to be in the X-Mas section but, heck if I'm not super happy it was! He'd be so helpful in the kitchen, too, if you thought about it! THINK ABOUT IT. Yes, he's an Annalee creation, so he does go hand-in tentacle with all the other X-Masy Annalee mice bakers, so I guess he's not as out of place I wanted him to be. Also: Hands up if you think Annalee makes creepy dolls that no one but grandmas buy. Why are they all crafted to look OLD and like they're wearing too much makeup?! 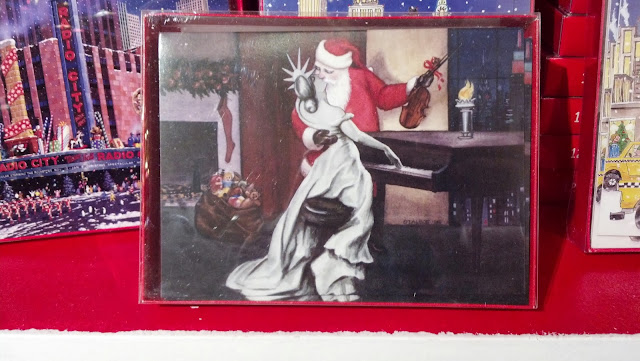 This is THE best X-Mas card I have ever seen. It really captures the "Santa interrupting Lady Liberty's piano playing to French her and give her a violin" mood of the season.


Overall, I give the Macy's 2013 X-Mas Floor a solid B+. The lighting could be better, but the memories are most excellent. If you're in the NYC area - or about to visit - I suggest adding it to your list of things to do this holiday season. Be prepared, though, because the display is HUGE. You're not getting out of there in less than an hour. Even with all my pictures, I covered only a small fraction of the wonders you'll see. Leave ample time to see it all - and bring a light snack, in case you start getting grumpy.

Also: Try and go before Thanksgiving, otherwise it'll be a crowded, nerve-wracking madhouse that will leave you hating everyone and everything within a 12-mile radius.