I realize that the longer it takes me to write up this post, the less relevant it becomes. Therefore, I am going to just power through it and revise nothing! (This is known as "underselling".)

Where to begin? Let's begin with me wrangling a Press Pass to the THE must-see nerd event on the Eastern Seaboard! Jealous?! You're all Martian Manhunter with envy, aren't you?!?! (Dropping comic references! See, I deserved to go to this!)

OK! Let me just start here: The place is BONKERS. It's essentially a giant box (The Javits Center) packed with weirdos and people trying to sell you something. I was not selling anything. QED.

Let me restart here: Upon getting inside I immediately remembered that I hate crowded places, people, and crowds. People just walk so DAMN slow, in crowds. OK, seriously! Is it too much to ask that you kinda "pull over" to the side BEFORE you start gawping at something? Why do you have to come to a dead stop, right in front of me, because you saw a guy dressed as some obscure character from an old Anime series that no one but you and that guy recognize?

Let me RErestart here: I think I started off on a negative foot, there. Let me refocus this to be a joyous celebration of everything great about nerd culture. Which is, honestly, what Comic Con is. I know there has been a lot of talk about "exclusion" and "making people feel unwelcome" at many recent cons, but I have to say, as a white male, I experienced NONE of that. cough.

SOOOOOOOOOooooooo.... I'm not sure if I should just go through my days' itinerary, or what. I have to warn you: I do not have pictures of everything I did, so I hope you like reading. Why didn't I take a lot of pictures? Because I'm a shy shooter. It takes me quite some time to warm up to a situation to the point where I feel comfortable taking photos and even longer until I'm comfortable asking PEOPLE if I can take their picture. Honestly, I NEVER want to ask some stranger if I can take a picture of them. What if they think it'll steal their soul, and I've just made a faux pas?!

OK, FIRST I arrived at 10am, entered through the elite Press Entrance and immediately got in line to see The Comic Book Men panel. I was way far back on the gigantic - and I mean GIGANTIC line, you cannot imagine how long these lines are. And they're not just long, they are also WIDE, which gives JERKFACES ample opportunity to scoot down the side, because I was alone and could not block the whole thing with my slightly less-than obese frame. Sigh. (Happy thoughts! happy thoughts!)

The panel was OK. As much as I like Kevin Smith, I was there to see the Comic Book Men talk, and everyone in the audience was only asking Kevin questions. So it was more like "Kevin Answers Questions About His Movies While The Comic Book Men Watch" panel.

From there, I decide to wander around the showfloor for a while. My meandering path took me past many a cosplayer (pictures not available) and up towards something called "The Block". On the escalator, I received a text from a friend: "Hey! If you see it, could you pick up a limited edition toy at this one booth?" "Yeah, right, I'll get RIGHT on that!" I thought, right before I got off the escalator and realized I was facing the exact booth I needed to find. Is that some kind of weird Karma? Is there a name for that?

Anyway, what he wanted was this:

I approached the cashier. "Do you have any of the exclusive golden Ryu left?" "SURE DO! How many do you want?!" I paused. "Um. One?" (I even held up my finger to further indicate the one-ness of my needs. His reply was a sputtered, "ONE?!" "Um... yeeeeeas?" I began to doubt how many I really wanted. DID I want to buy 30 and sell them on eBay? No no, just the one. One. Turns out, I could be selling those $16 dolls on eBay right now for $30. I'm SUCH an idiot.

From there I wandered around. Met my friends at the ModHero booth. His art is awesome, it looks like this:

I wandered around some more. I saw the Topps booth, but everyone behind the counter was talking to each other and didn't really seem to have time for me. That's ok, because what was I going to say? "I loved Wacky Packages, growing up!!!"? But then I saw a guy doing a sketch of a martian from Mars Attacks and I was like, "Maybe I DO want them to notice me, so that they can tell me all about this sketch. Can I get one, somehow?!" INstead of actually asking, I opted to just hang around for what must have been a creepy amount of time. Yet no one in the booth said anything. So I left.

From there, I decided to check out Artist Alley - the far far far-away room where they put all those pesky ARTISTS who actually write the comics we're all here to see. Seriously, it's like they're are hiding them off, out of the way, down the longest hallway you've ever had to walk down to see a comic book artist.

I had plans to get one of these guys to sign a comic book I brought with me, so I thought now would be a good time to scope the hall out. The guy I wanted to see's table was LITERALLY as far away as it could have been. It was all the way in the back, in the corner. To get there, I passed by a lot of cool people, drawing cool art for people who knew who they were ... but I'm just not that kind of comic book fan, I guess.

Having located the table I would need to come back to in about 4 hours, I decided that that was enough and I was going to head back to the main hall. After all, why not walk that horribly long hallway FOUR times that day? But on my way, I spied Chris Claremont! If you read my OTHER blog, you'll know that I'm currently trying to read every X-Men comic, IN ORDER, from the VERY BEGINNING. Because I am weird. Anyway, Chris Claremont was the guy who brought the title back in the 70s (after it had been canceled in the 60s) and went on to write the series for, like, 16 years. his stuff is great. And it's a marked change from the previous series.

I walked up to his booth. "Hi! I don't have anything for you to sign, or anything," I said, "But I just want to thank you for the decades of great writing." "Thank you" he said. "Yeah, I just started reading the entire run of X-Men from the beginning and I just got into your stuff. SO good!" To which he said something like, "Yeah, I'm pretty great, right?" Like the vegetarian sandwich eater once said: Never meet your heroes.

A buddy of mine who was working at the ModHero booth had a lunch break, so I met up with him. Our lunch choice was based upon what had the shortest line. That meant Korean Sandwiches. Though the line was short, the workers did their best to keep it NOT MOVING AT ALL. That said, it was tasty and fairly priced. Much better tasting and a better value than your average Con food. That said, I brought my own water bottle from home. Had I had to pay for water, I might be singing a different tune.

My friend had to get back to work, so I continued to skulk around the show floor, staring at things I wanted to buy, but knew I wouldn't because of A) they were too expensive or B) I just don't need more crap cluttering up our apartment. For instance: 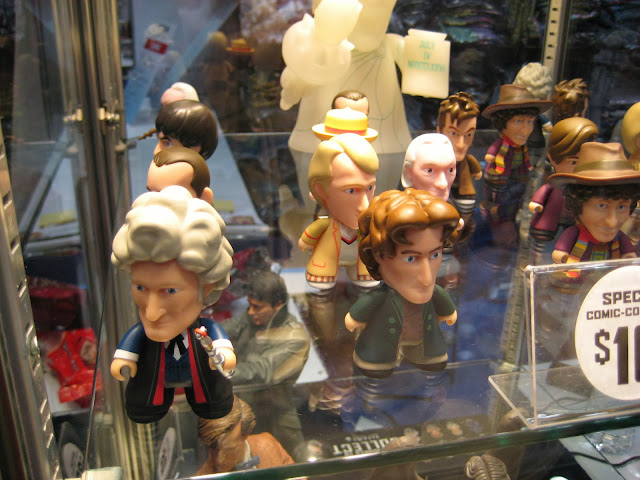 I still wish I bought at least the John Pertwee one. But how could you just stop at one? It'd be like playing favorites. Sigh.

Elsewhere, at the Marvel booth, I met Lola:

And I got a button:

I'm a sucker for anything Thanos, these days. I will never put this pin on anything I own or wear. It'll probably sit around at the bottom of a storage bin for years until my wife, during one of our "clean housings" will silently hold it up for me to appraise at which point I will give it the thumbs-down and she will toss it in a garbage bag. (If you want this button to avoid that fate, send me a SASE and it's yours!) However, I just couldn't pass up the Marvel booth and NOT grab a freebie. Make Mine Marvel (for free)!

Many booths on the showroom floor offer nothing more than glorified Flea Market items. These are people who are either collectors or, more accurately, prospectors who buy collectable stuff, then come to comic con to resell it at a higher price because now it's "rare". Case in point:

You can't tell from that picture, but it really looks like a gun. Part of the Masterpiece Collection, Meggy is the correct size and has all the detailing of a real, a-cop-will-accidentally-shoot-you-if-you-are-playing-with-it gun. The other thing you can't tell from the picture was my out-loud groan over the $200 sticker price.

Man, EFF my camera and it's always-blurry shots. Anyway, I actually walked by this booth, stopped in my tracks, walked backwards, pivoted toward the booth-dude, and said, "I WOULD like to know what Stan Lee smells like!" To which he produced one of those little paper scent strips that he sprayed with cologne. I gave it a whiff. Words cannot explain how mice it smells. It smells of kindly old man ... and wood. Some kind of wood. It's a comforting smell that you wish all adults had. I would actually consider buying it and wearing it. Instead, I thanked the guy and walked away, turning down his offer of "two bottles for $25 and a T-Shirt" (which in hindsight is a slamming good deal). I have a fuzzy-lined pocket on my bag that is meant to be filled with sunglasses, I guess. It was into that pocket that I slipped the strip of Stan-scented paper. Now, anytime I want a comforting whiff of the creator of Spider-Man and the X-Men, I can unzip a pocket and inhale. There is NOTHING about that last sentence that shouldn't make you uncomfortable.

I decided that I was con-tired and done for the day, so I was wending my way to the exit when I passed a couple that made me do a double-take. I stopped. "Excuse me ... are you steampunk Cyclops?!" "Yes, I am." "Can I take your picture?!"

And that was the first photo of an actual person that I took the entire day. But it opened the floodgates! On my way down I saw Star Lord being interviewed: 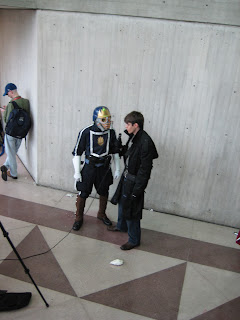 Don't know who that is? Then how about THIS fellow?

Yep. Thanks, NY Comic Con, for being a weird-ass experience!

Will I get around to writing up DAY 2 and my run-in with Stan "The Man" Lee?! Who knows!