Do you know how hard it is to find goodie bags?! Well ... OK not really that hard at all, it turns out. Maybe it was the WAY I was going about it.

I started, as I most often do, at Amazon - but all the bags were cellophane and/or huge! I was looking for the classic, small paper bags, like the ones I had in my youth. I KNEW they must still exist, but I couldn't find them online.

But why do I want these? See, this year, I have found myself, for one reason or another, in possession of a lot of extra Halloween toys. The main reason is that my wife and I constructed a Halloween Advent Calendar, which we filled with small trinkets. This leaves a lot left over. What better way to get rid of crap you don't want than fobbing it off on children? Children who literally beg to take it off your hands!

Now, I'm sure we all remember "that house", right? The one that, even now that we are grown ups (in body, if not in mind), we remember as being the most kick-ass house we ever visited. As far as these stories go, mine is pretty lame: Some friends and I took a chance and rang the bell on an undecorated house and the lady handed each of us a full size Snickers. FULL SIZE! At the time, us little non-PC jerks thought that she bought regular candy bars because she was Asian and she didn't understand that she she didn't have to give out good candy.

Childish racism aside, It was an amazing enough experience to remember for the rest of my life.

I want to be that Asian lady!

Wait... You know what I mean! *I* want to be that guy who gives out something SO AWESOME that some kid - even if only ONE - remembers it for the rest of his life.

The Future:
"Hey. Do you guys remember that one house we went to, with the guy who was sitting outside wearing a button-down candy corn dress shirt? And he gave out entire goodie bags of candy and toys, instead of just one "fun" size Kit-Kat?! No? Well, it happened ... and I'm going to blog about it!"

It's my way of gaining immortality. At least, until that KID dies ... grim.

One result of a search for paper goodie bags turned up a listing at Etsy. The seller wanted something like $9 (plus shipping) for six bags. They were sweet vintage bags, but I needed more than that, as I plan on seeing more than six kids come a-begging. Oh, also, that is a ridiculous amount to pay for goodie bags ... heh heh ... yeah.

My next course of action was to hit up the dollar stores in my new hood. Each smells like a plastic corpse and each has varying degrees of weirdness. There's the one that has a squishy patch under a rug that feels like they patched a hole in the floor with grocery bags. There's the one where the guy watches the TV evangelists all day and is super polite. And then there's the one that smells like your grandma's basement and has very few lights inside. And ALL of them make my skin itch, just being in them. I assume the itch is caused by some kind of dollar-store-exclusive toxin eroding my skin. Yet in I went! However, putting myself through flesh-eating dollar stores was fruitless. I got NOTHING! I gave up.

However, my beautiful wife, seeing my pain, offered to check out Party City after work one day, even though it is out of her way and a big hassle. I love her.

AND, in another example of a tale that seems to building to something, then just ... ends, before she could investigate Party City, we happened to stumble across exactly the kind I wanted while in our local grocery store. 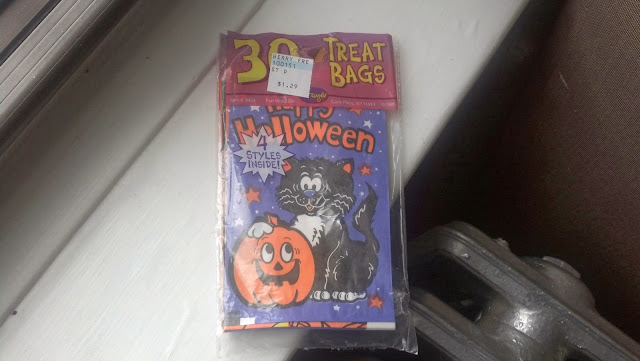 Of course! Hanging on those weird strips, in the middle of a grocery store aisle! THAT'S where you find paper goodie bags! I was overjoyed.

I figured I would make up all 30 of these bags into Halloween giveaways because, even if we didn't see that many kids, I decided that, as the flow of kids slows down, I will choose one lucky kid to receive ALL of the remaining bags! ONE KID! ALL OF THE BAGS! (Part of me is kinda hoping that we ONLY see one kid, if only to blow his mind. That kid will truly remember me! Hopefully fondly and not as "the guy who gave me Type II diabetes.)

They came in four our assorted designs, each more almost-vintage-but-falling-just-this-side-of-classy-so-they-just-look-old-instead than the next! 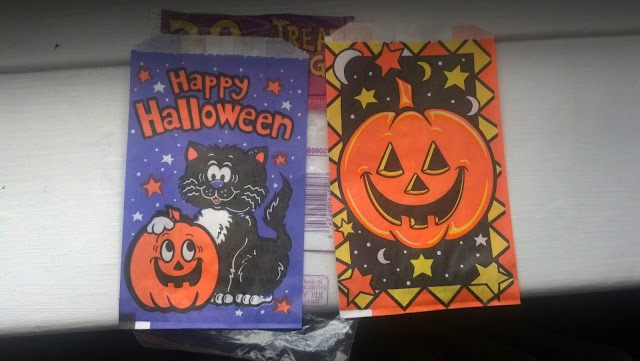 The pumpkin on the right is hands-down my favorite of the pack, though the one on the left seems to tell a happy story. If cats and pumpkins can be friends, maybe there's hope for all of us. 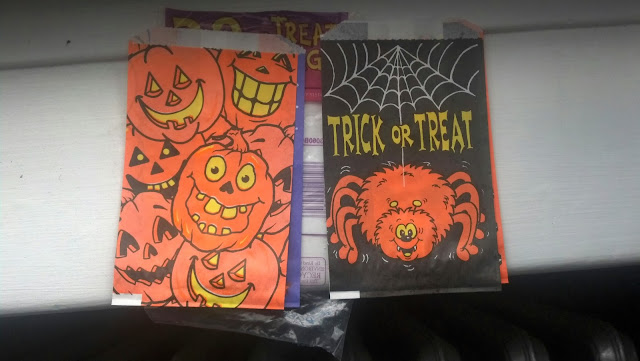 The one on the left is hands-down my least favorite, though the one on the right isn't winning any blue ribbons from me, either. With that laughing pumpkin, they were clearly aiming for "spooky" but fell short and hit "disturbing". "I can smell your eyes, cousin!" it shrieks. You mom says to just ignore him and he'll stop, but you have your doubts. Also: I never found fuzzy spiders to be cute, just a horrible reminder that those nightmares are also covered in HAIR, instead of chitin like respectable insects. 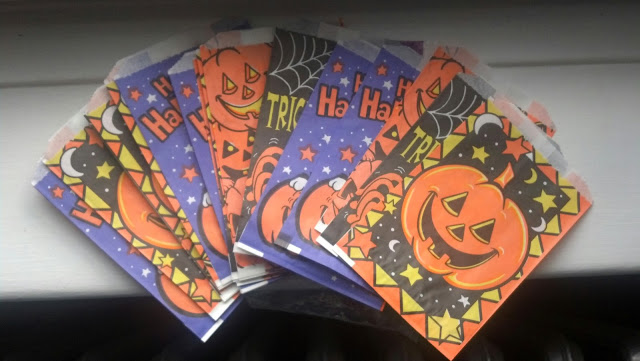 I look at them all and smile. I smile because I found them, but also because I know that, in a week, they will be out of my house forever. Will I not even keep one, as a memory keepsake? Nah. I have these pictures, so get them the hell out of my house!

And now, some regret:
Aw man, if only I had done a better Etsy search, I would have found these vintage goodie bags: 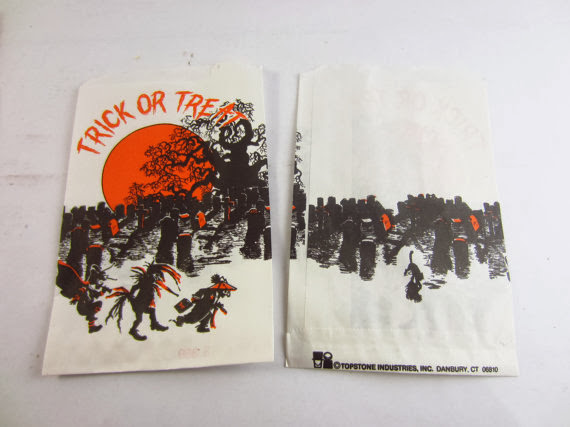 Those are EXACTLY what I wanted! Worse? Now the bags I DID get - the ones that I was, just seconds ago, so excited to find -  look like crap. But maybe it's for the best. Those vintage ones look so good, I don't think I'd want to give them away. I'd probably frame them as wall art.  Or, at least, intend to ... but they would become "just another thing in a box somewhere". Nah, it's best I got the ones I did, so I can remain emotionally unattached to them and kick 'em out in about a week!

I can be followed on Twitter @sommerjam or on Google+. Your choice!