Everyone is raving about this year's release of General Mills' Monster Cereals ... and rightly so! See, the corporate breakfast giant has, along with the usual cadre of Count Chocula, Franken Berry, and Boo Berry, re-released Fruit Brute and Fruity Yummy Mummy. Its the first time in decades that these two are on store shelves and the first time ever that all five are out at the same time! In the circles I keep, this is a big deal. If this news does not excite you, I'm not sure why we are friends.

(Though, honestly, I mean that I'm not sure why YOU are friends with ME. I have no illusions who is putting up with whom, here.)

However, since this is a "big" deal, everyone and their blogs have already covered / talked / videoed / and eatened them, so I'm not sure what I can bring to this love-fest that is new and refreshing. 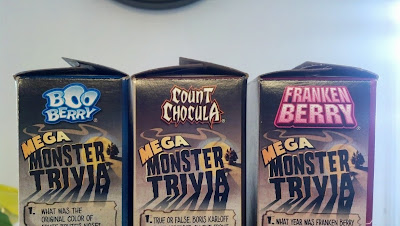 The other day, my beautiful wife gathered up our three boxes of Monster Cereals into her arms, brought them over to the couch where I was lazing, plunked them down, and said, "Want me to ask you these Mega Monster Trivia questions?" This is why I love her. She knew what the answer would be, so she didn't bother waiting to bring them over until after she asked. She's great.

I will not ruin the excitement of being asked these questions by your own wife, so I won't do anything as stupid as transcribe them all here, BUT, I will say that:

1) I was SCARY good at it (and these are not your common kids-cereal questions. No way. General Mills knows exactly the kind of 20- and 30-somethings who are buying these boxes, so the questions are tailored to us.)

2) One of the questions hinted at something I just HAD to track down: 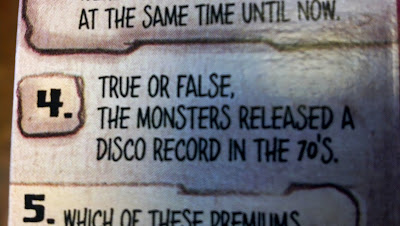 Admittedly, I originally guessed that this was true ... and good lord it is!

In 1979, contained "inside specially marked boxes" of Count Chocula, Franken Berry, and Boo Berry cereals was a 6" "flex-disc" cardboard record. (For those unfamiliar with the concept, essentially, it was a piece of cardboard that you could actually play on a record player.)

ASIDE: Isn't the phrase "inside specially marked boxes" just awesome? It touches a very specific nostalgia-nerve in my brain. I can get free stuff, if I only find the right box! (Of course, as a kid I didn't understand that at the supermarket ALL of the boxes were probably "specially marked" with the latest promotion.)

Thanks to CountChoculatte on YouTube, we can all hear this amazing disco disc:


At first, I was slightly disappointed that it was more of a skit than a "disco album" (as the trivia would have had me believe), but it's a solid-gold trip! (Is that the right slang for the disco era? Studio 54? Cocaine? Son Of Sam?) The record chronicles the adventures of the three monsters as they decide to go out and learn how to disco. Heading to the local DiscoMat (?), they stumble into a disco contest where the prize is a dance with Donna Disco. Each dances in a very literal way and it's surreal. It might not be the best four minutes and twenty five seconds of your life, but it won't be the worst, either.

I guess there IS a "disco" song in there - there's a brief segment where everyone (including a Wolfman Jack sound-alike?) sings "monster mania" over and over. Is that disco? If so, I'm glad it's dead.