We went back up to Danbury this past weekend, my wife and I, and we had some time to kill before going apple picking with the family, so we did what I have started calling "Halloween Cruising". That is: Driving around and seeing what kinds of Halloween decorations and foods we could spot.

Living in the city, we don't often get to do this. Not owning a car of our own means we really never get to do this. But we borrowed a car and off we went. The game plan, here, was really just to hit up Target and score five of those retro boxes of Monster Cereals.

So that's where we went first. Overall, it was a disappointing experience and they didn't even have a Halloween section in place, yet! C'MON! It's nearly the second week in September! GET ON THE BALL! The only concessions to the season were these tables that were set up WAY in the back, by the camping stuff:

The only other Halloween-ness was in their "dollar bins", which were full of cheap Halloween toys. Most of these toys glowed in the dark (Glew in the dark?), but only one ALSO looked like fake dog poop: 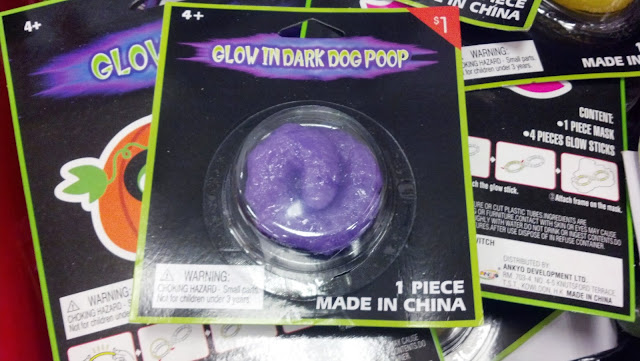 I never liked the idea of this gag, but I'm not sure if it being purple and glow-in-the-dark makes me like it more or less. On one hand, you can use it as evidence that you have a radioactive dog that only eats Grimaces (he of McDonalds), but on the other, it's still fake poop. Yin and Yang, I suppose.

One thing in the dollar bins that caught my eye was a folding/hanging gangley skeleton. Since I really didn't want to leave Target empty handed, because I have a shopping addiction, I bought it:


I like everything about this thing, but the first thing I fell in love with was HOW he was folded up in the packaging. This skeleton knows Pilates. Or Yoga. Now I will attempt to make a "Downward Facing Dog Bone" joke and will lose several followers.

An almost-clear skeleton is way harder to take a picture of than you think it's going to be, but I tried: 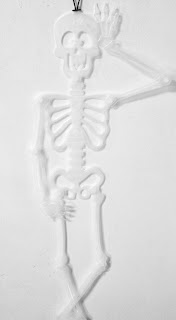 Once I got it home, I realized that nowhere on the packaging did it say "Glow In The Dark" - I had just assumed it did, because it was located near everything else that gloweded in darkness.

Out loud, to my wife and niece (who was visiting), I said this exact thing: "Oh no this doesn't glow in the dark I thought it glowed in the dark didn't it say "glow in the dark" maybe it still glows in the dark (I ran into the bathroom, turned on the light, held the skeleton up to it for a few seconds, then turned the light off again) IT DOES!!! IT DOES GLOW IN THE DARK!!!"


PICTURE NOT AVAILABLE!
[There is no earthly way to capture the slight green glow this skeleton emanates.]
[At least not one in the short amount of time I was willing to dedicate to trying.]

Then I calmed down and joined them to watch Pretty Woman - which is a super awkward movie to watch with your niece, even if she is 18 and should technically know all about all that stuff. (Even more awkward? It was being shown on ABC Family - at 6pm! "Mom? What's a p... p... prostitoot?" Thanks ABC "Family"!)

BUT ANYWAY, before I forget: Target continued to be a cereal / serial disappointment because I did not find any of the boxes - exclusive retro or regular non-retro style - on their shelves. Just in case we overlooked them, I even "manned up" and asked a worker if they had them. (I realize that "manned up" is probably not the right expression for asking a Target staff member about seasonal cereal.) She didn't openly laugh in my face, but there was something in her eyes that said, "We both know you asking about this is silly, right?" There was something in my eyes that said, "NO WAY!" Then her eyes said, "If I just answer him, I can go back to stocking these shelves, which is better than dealing with crazies." Then her mouth said, "I haven't seen them come in yet, no."

It was a wonder, fall-feeling day, so our next stop, naturally, was to 7-Eleven to get Slurpees ... ? But that's not the point. The point is they also sold THIS:

My god. It might not look huge, upon first glance, but look closer ... that's a TWO POUND Rice Krispie Treat. I wanted to put a quarter in there, so you could judge scale a bit better, but I had no change and I just wanted to quickly take the picture because I didn't want the guy at the register to think I was stoned, or something. (I'm sure the 7-Eleven guy just assumes everyone who enters is stoned, right? Probably a safe bet.)

You can bet I would have bought it if it didn't cost $12.99! Too rich for my blood. but, of course, like any good weird / nostalgia / retro blogger, I immediately regret not making the "investment" for the sake of the site. I think, later in the season, I'll have to redeem myself by making my own. (This won't happen, but I'll give lip-service to it, now, to make us all feel better.)

Slurpees in-hand, we drove on. We were about to pass a supermarket I'd never heard of (Big Y) when I said, "You know what? Could we stop in there? See if maybe they have ... ?" As a testament to how much she knows and loves me, my beautiful wife did NOT have to hear the rest of the question NOR did she roll her eyes or make "ugh" noises. Instead, she threw on the right-turn signal and we headed towards ...

NOW! I'm going to tell the next two parts of the story out-of-order for the sake of the narrative. We REALLY went immediately into Big Y, but I'm going to pretend we went next door, first:

Oh yeah. Dollar Tree. I'd never been to one of these before, but I was pretty sure I knew the score. They would sell crap, for a buck. On the pricing I was not wrong. On the quality ... well, I wasn't wrong there, either, yet, because it was Halloween-related, I'll let it slide from a grade of "garbage" to a ranking of "slightly better than garbage".

I have no fondness for rats, but my wife hates 'em. I would have bought one of these old-time-y rubber rats, just for nostalgia's sake - to remember a time when these rubber rats were the best rats one could get, as a toy. The younger among you might not remember that there was a time when you could just not find realistic rats. Simpler times, I suppose?

Also, I didn't take a photo of it, but at the bottom of the rat photo, you can see a box full of plastic skulls. I regret not buying of of those ... or 100 of them and making a Ball Crawl out of them. (Look. I just want to swim in Halloween, is that so weird?!) 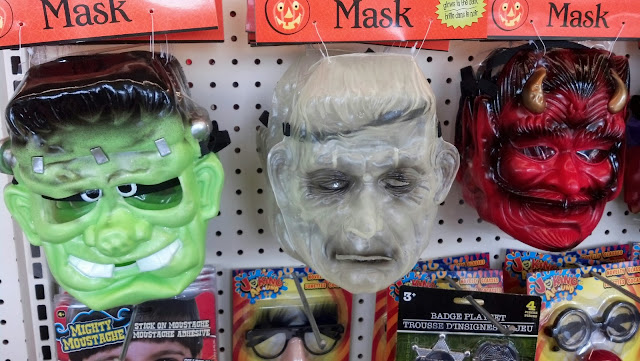 Aw, man. Here are three more "regrets" I have from our Dollar Tree visit. These masks were great. They were not hard, brittle plastic like the kind I used to get growing up, but soft, rubbery plastic. The stiff elastic band would make these things conform to your face - possibly making it hard to breathe, but you'd look like a Mummy, so Yin Yang. (This post is FULL of call-backs, huh?)

And just LOOK at the mummy mask! It's transparent! So you could pretend to be the real The Mummy from the original movie caught 1/2-way in his cross-fade transition from dead husk to Boris Karloff. (Did that even happen in the film? Or am I confusing the effects of The Wolf Man with the story of The Mummy? Either way: I didn't buy it and I have sad feelings in my feel-zones.)

At first I was worried that my groceries would be funding Al Queda and I was hesitant to go in, but then I noticed the giant "American Owned", so I was cool with popping in. USA! USA! USA!

Most of their decorations were placed right up front, just inside the entryway. This is where Halloween decorations should go, IMHO. (In My Halloween, O!) 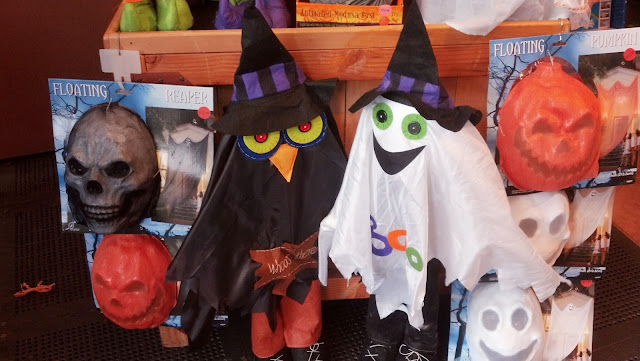 A CrowWitch and a GhostWitch. One of these guys REALLY doesn't want you to come near the house he is set outside of, the other REALLY wants you to come in. Each is telling it's own creepy tale, if you just let it.

My wife and I are already married (to each other) so she is lucky that she won't have to actually articulate, using kind, slow, small words, why we can't have this at our wedding. I think avoiding conversations like that was the real reason why we eloped - you just never know when your partner is going to spring a Skeleton Cake Topper on you.

Also up front was some candy:

But, alas, no Monster Cereals. "They would be HERE, wouldn't they?!" I exclaimed, sadly. But I decided to do a walk-through anyway. Heading down the cereal aisle we spotted ... NOTHING. I was resigned to leaving without Fruit Brute or Fruity Yummy Mummy - the two cereals my collection was missing.

It's hard to do a dramatic reveal, when the picture of the cereal I'd been questing for is so obviously right below this sentence. 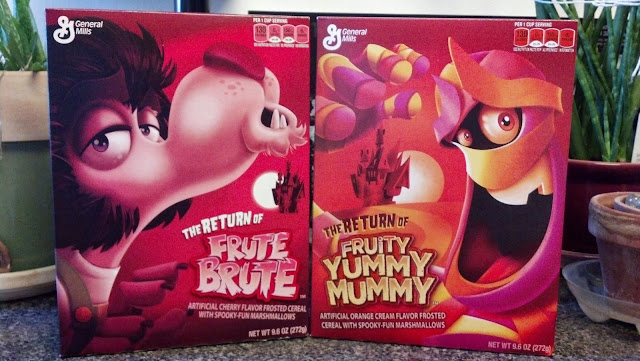 I found them!!! All was right with the world.
And they were 2 for $5, which sounded like a STEAL to me. Though, I'm glad I only needed these two, since I probably would have had some kind of aneurysm trying to figure out which kind I would have wanted a second box of, to get the best deal.

I wasn't totally happy with the way the Big Y cashier asked, "Is this all?", but I think that was just my big-city-ness taking offense at friendliness. I hope.

And then it was time to go apple picking.