Snow White was released in 1938. In 1993, striking while the iron was hot, SkyBox (pretender to the sports card throne held by Topps at the time) released Snow White Trading Cards.

From what I can surmise, these cards were released to coincide with the theatrical re-release of the digitally remastered film. Dr. Wikipedia, would you kindly explain?

In 1993, Snow White and the Seven Dwarfs became the first film to be entirely scanned to digital files, manipulated, and recorded back to film. The restoration project was carried out entirely at 4K resolution and 10-bit color depth using the Cineon system to digitally remove dirt and scratches and restore faded colors.

I've talked about - and shown you - other cards that I found in the magical, time-warp vending machine that sits just outside of my local grocery store, before, so it should come as no surprise to a couple of you that I also found these in that same machine. Run on sentences get a bad rap. (Or is it rep?) I originally wasn't going to buy these cards, but then I remembered that I have a blog that needs constant feeding. Like some kind of baby. (Except that when I don't feed my blog for a week, Child Protection Services doesn't come a-knocking.) 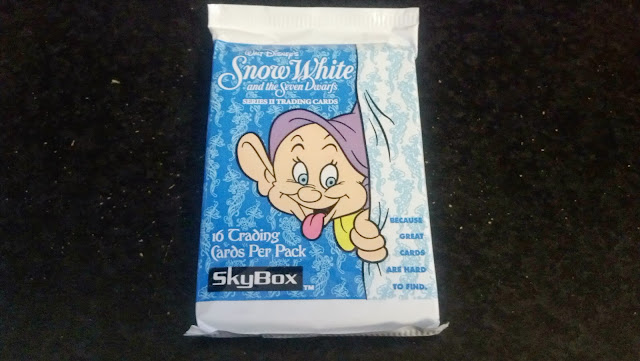 I find Dopey gross. Just look at him. Slathering, mouth-breathing freak. I never found his antics cute or adorable. And on the cover of this pack of cards, he just look lascivious. I know he doesn't talk in the movie, but can't you just hear him whispering, "I sssssseeeeeeee yooooooooooou...."?

Also, please take note: If you look closely at my crummy picture, you'll see that this is a pack from the SECOND SERIES of Snow White Trading Cards! The first series was such a hit, they did them again! I can only wonder if this series fills in some very important plot holes left out of the first series? or are there duplicates in there?! I'll never find out and neither will you. We both have more important things to do than seek such answers.

If you're familiar with any movie tie-in cards, you know the deal: Screen caps from the film, plus synopsys on back. Most of these cards tend to have a cutesy caption added to the front, so I respect SkyBox from abstaining and just letting the whole image be displayed unobstructed. Heck, they remastered these images, let 'em shine!

Now, yeah, I could just show you the cards I got in the pack, but that'd be a bit boring. Let's play a little game, instead! Let's imagine that we are space aliens ... yes ... heh heh ... "imagine" ... and we've never seen the film. Now, let's try and reconstruct a story from these pictures. (This game is also known as "Jeff Teaches You How To Write Words Without Saying Anything".) 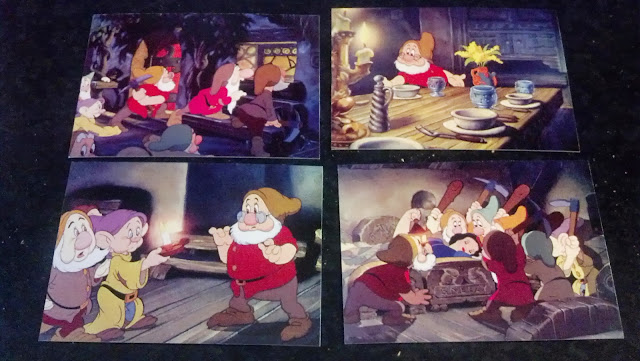 Top Left: A gang of evil dwarves, who call themselves Tyrion's Angels, goes out for a little ultra-violence and they spot a shack with a light on, but no one inside.

Top Right: So they enter and are awed by all the expensive things set out on the table. The one with glasses, let's call him "Professor", can tell that this is high quality gear. He gestures: Take it all!

Bottom Left: One of the smarter dwarves, we'll call him "Brains", notices that there is a candle lit, so he surmises that someone is still home. Maybe they're upstairs right now, calling the fuzz!

Bottom Right: The dwarves sneak upstairs and find a dame, let's call her "Sleeping Beauty", and trying to decide if they should kill her in her sleep, or pass ... wait, this is a kid's movie, right? Moving on! 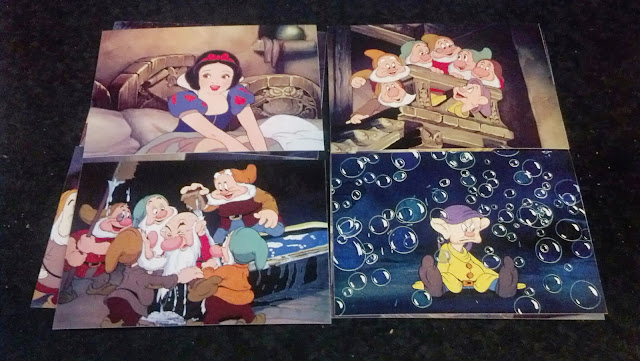 Top Left: But the sleeping beauty wakes up before the deed is done!
Top Right: So, in a panic, they throw her off the balcony.
Bottom Left: They all go out to the washin' trough to symbolically scrub the blood of their hands.
Bottom Right: But Brains is piiiiiissed because he realized the dame didn't die! 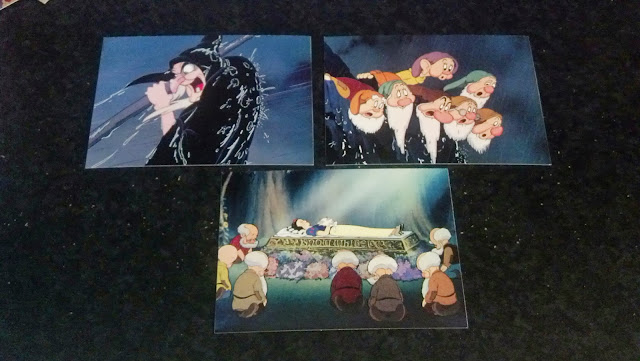 Top Left: So he calls in the local witch, let's call her "Cackles", to finish the job.
Top Right: Cackles, improving on the dwarves' plan, throws the girl off a cliff! THAT oughta do it!
Bottom: The dwarf gang say a quick prayer before eating.

Something I feel needs to be mentioned: I didn't have to reorganize these cards at all. They came out of the pack in the correct order. I am left wondering if that was some fluke of probability, or if they did this so kids had one less thing to worry about? It ALMOST makes me want to buy a second pack to investigate what's what. Edward James Almost.

Also in this pack were these cards: 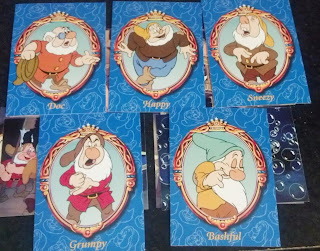 I'm starting to really think my pack was a statistical anomaly. After all, I got 5/7ths of the dwarveses, how is that possible? Thankfully I didn't get Dopey, or I'd have had nightmares. "Aaaaare yooooou sleeeeepiiiiiiing?"