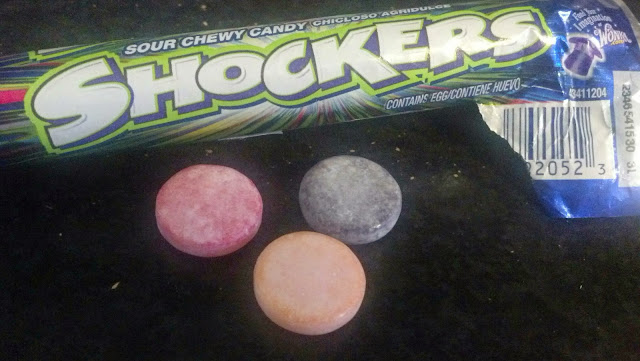 In the early nineties, I loved Shock Tarts. Long story short, I just found a roll of these similar-looking "Shockers" in this boutique, overpriced candy store in my hood. It was the last roll they had. It cost $2. I paid it.

At the counter, I asked the lady, "Are these like Shock Tarts?" Her pause told me that she is not a candy historian, just someone who knows that they can overcharge for candy in our rapidly kid-overrun neighborhood. It's a living.

So it should come as no surprise to you that they are exactly the same thing as Shock Tarts. Literally. According to Wikipedia, Shock Tarts were discontinued, then re released as Shockers. Sometimes there's just not a big, conspiracy story behind a roll of candy.

That's it. I used to like Shock Tarts and they're now called Shockers.

I prefer the name Shock Tarts, though, as it makes them seem like they are SweeTarts' evil twin ... or evil clone. One who will stop at nothing to destroy SweeTarts' life. Why such a grudge, Shock Tarts? They have their reasons and you won't push them on it, if you want to stay on their good side.

It's gross that it "contains egg", though, right?