Gather 'roun, friends and I'll tell you a sad story of disapointment!
Are you 'roun? Good!

So, a month or so ago, on one of my daily trips to CVS (not the usual one, but the one farther away that feels way more "upscale" - maybe because it doesn't smell like sweaty death like the one nearest my home does?!) I found these: 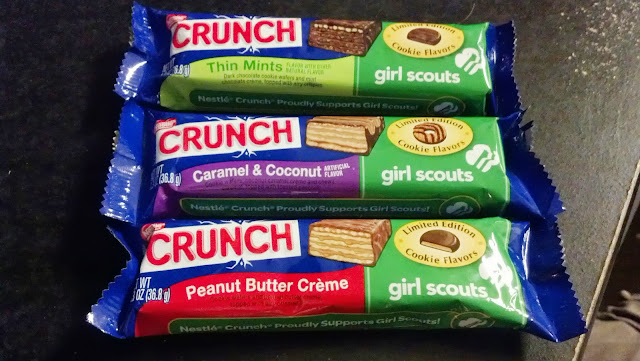 I thought they'd make a great blog post. After all, I love candy. I love Girl Scout Cookies. Clearly I could force myself to come up with something to say about these things that would keep people entertained.

Well, after weeks and weeks of not eating them, I realized that they were just going to sit in my fridge forever, because I didn't really have anything to say. Add to that the fact that one night I was really hankering for dessert and there wasn't anything else in the house, and we find ourselves in quite a situation. Something had to give, and it was my blog. 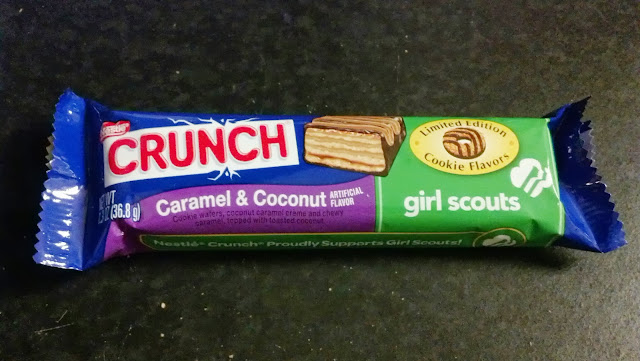 The Caramel & Coconut was the first one I ate. At that stage, I still held some hope that I would "do something" with this, so I even took a few "taste test notes" and made some jokes:

Caramel & Coconut (Samoa)
Why not call it Samoa? Probably because different location in the country use different names for these guys. "Caramel deLites", in one place and "Samoas" in other, less PC districts. Honestly, this is the one place where I will tolerate un-correctness. I shall always call them Samoas. Does that make me a monster? I don't think the name "Samoa" was applied to the cookies as an epithet, right?
Am I just digging a deeper hole?
The bar is actually, surprisingly, two smaller bars. These were great! Crumbly, just like the real thing. An accurate taste representation, even if you could not try and wear them like a ring, like we used to with Samoas.
I give these 5 stars (the same number of stars on the flag of Samoa).

And here is a close up of the bitten bar. I took this so that I would have enough photos to break up my blocks and blocks of sterling, glowing, super-hilarious text: 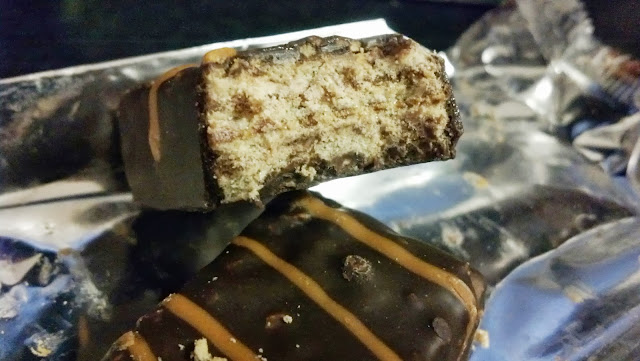 And here's one that shows off the "two smaller bars" that I found so surprising: 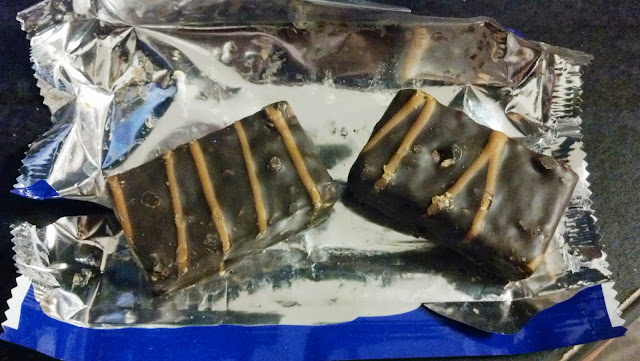 Look close and you can almost make out the reflection of my forehead in the foil wrapper! Also: I can't tell you how loudly the ghost of the OCD kid I used to be moaned, when I tore the wrapper. Shockingly loud. He'll get over it. Some day.

I also took these pictures: 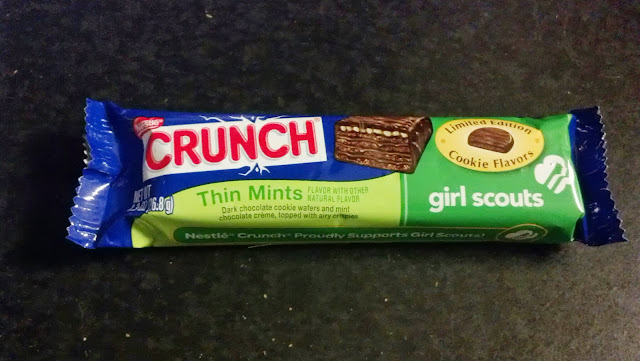 I consumed this Thin Mints version the next night. It ALSO tasted exactly like the real cookies. To the point of making me feel "over-minted" when I was done eating it. (You know, that feeling your mouth has after eating a whole sleeve of them, straight from the box? Don't know that one? Well Well Well, look who's all KLASSY!)

No pictures of this one's internal structure were recorded, but it looked shockingly similar to the Samoa one. So much so, that I could have just re-ran the first shot and you'd probably never know it was a repeat. But I have too much respect for you guys to try and pull something like that! 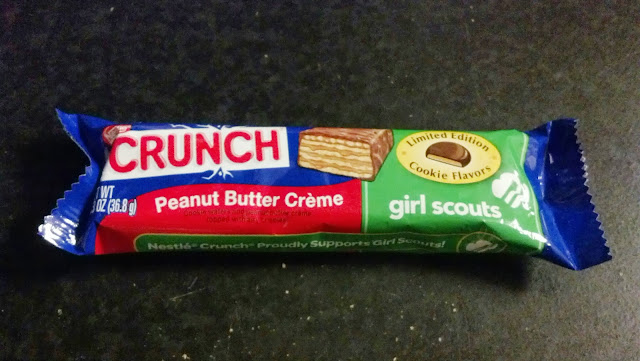 This one was terrible. Tagalongs are possibly my favorite of all Girl Scout cookies, so I had high hopes. High hopes that were DASHED on the rocks of reality. (Just like what happened to the hopes I had for this article AND just like the ones you had when you started reading this article.)

Why was it terrible? It was too flakey and did not convey the feel, taste, or experience of a Tagalong. (You know you can nibble away all the chocolate, then scoop out the peanut butter with your tongue, then, lastly, eat the denuded cookie, right? That's the Tagalong experience!)

Here's an internal shot of this one:

Maybe I could have made something of this feature had I done a side-by-side comparison to the actual cookies? But even that doesn't sound like it would have been that good ... AND it would have meant laying out some cash for real Girl Scouts cookies and them things ain't cheap. Plus, all that cookie money goes to fund their drug smuggling activities. (Start that rumor!)

So, there you have it, a super-long post about how I'm not going to do a post about Nestle's Crunch Limited Edition Girl Scouts Cookie Bars. I give myself an E for "layzeeeeee"?

(Stick with me, we'll get through it!)