I love baking. What you are about to read is not about baking, it's about mixing. (Yes, I am also a baking snob. ("Snob"? That sounds so negative... how about a "baking hipster"? UGH! WORSE! KILL ME!))

Here is a shelf, as I found it a couple weeks ago. 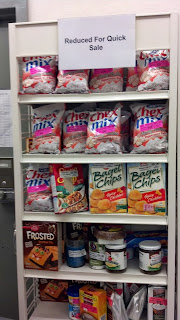 It was hidden at the way way back of my local grocery store. I never go all the way back there (kinda around a corner, past the enfamil) so I never saw this shelf before. Or maybe it's a magical shelf and it was only there that one time? If I go looking for it, it won't be there again. Like a Grocery Brigadoon.

Can't make out the words? Here, let me give you a close up: 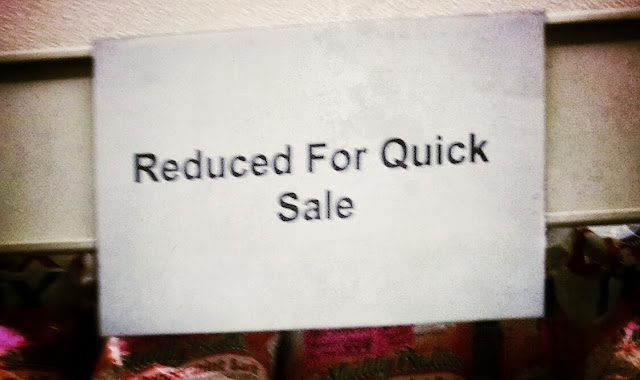 Everything on there was about to expire. This is normally a state of food that I stay WAY clear of. Oh, I always throw things out on or before (usually before - way before) the expiration date. I'm one of those. Hell, I become dubious about the safety / freshness of food literally minutes after I've opened something. Second-day milk? Might as well throw it out, because it probably went bad overnight, right? I mean ... it's OPENED! Opened things go bad faster. Like, in seconds.

I have a very personal list of "freshness rules" that reside in my head. The most frustrating thing if you live with me - like my beautiful wife does - is that these rules are often contradictory and always in flux. I'm a handful! I'd like to think that my sense of humor, personality, and roguish good looks make up for this ONE flaw.

And yet, one thing on this shelf attracted my eye: 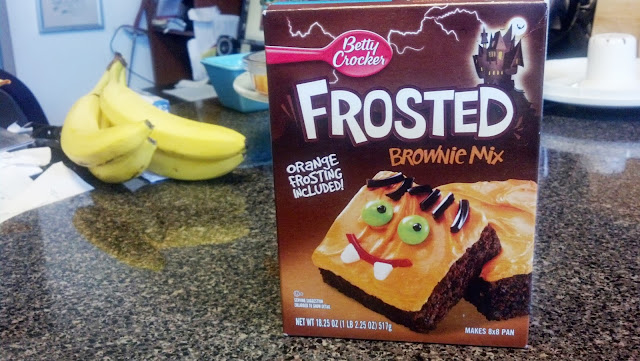 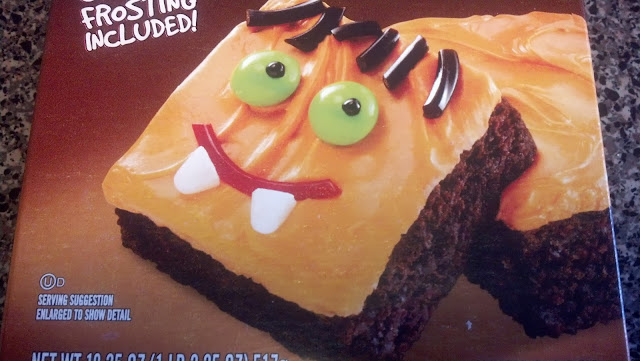 I mean! Right?! How could you pass that up? I wound up buying it ... for 49 cents. A steal! (Just as long as it didn't hospitalize me with food poisoning, of course.)

And then WEEKS passed, before I got around to making them. Needless to say, it is now past whatever the exp date on the top was: 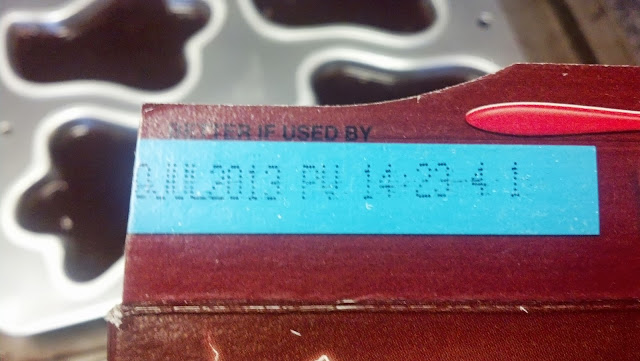 I mean, it clearly says JULY, there. And there is a 0 as the last digit of the date. Unless Betty Crocker uses a different calendar, and it expires on 50 July 2013, I'm pretty confident that we're outside of my comfort zone.

But why did I drag my chef-feet? Since I'm used to REAL baking, you see (SNOBSNOB!), I was anticipating a long, drawn-out process of measuring and prep-time and cursing and flour getting everywhere. I forgot that Betty Crocker is for housewife/shut-in on the go (SNOBSNOB!) and requires all but no ingredients and even less time.

Plus, it's been hella-hot as hella, here, and I didn't want to go anywhere near a dessert who's first instruction is "Preheat oven to 350". That sounds hot.

Once the temp dropped - and it was even past-er the expiration date - I decided to go for it. Chanting in my head, "It's still good; this won't kill me...", I began. 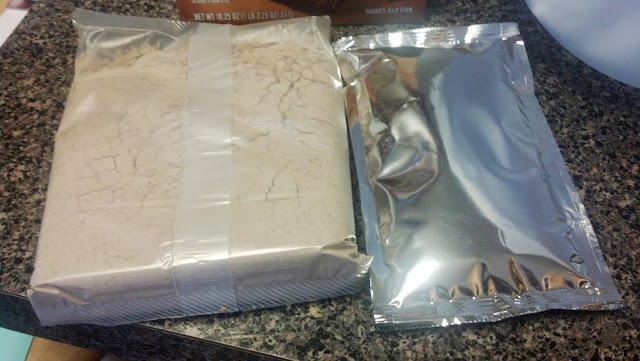 Opening that packet of brown powder was 50% of the instructions, so it came together super fast. So fast, in fact, that I was left waiting for the oven to heat up. (Which probably took longer than normal, because I had the air conditioner in the kitchen up to full blast. (Because it was hella hot, yes.)) The Sweaty Baker. Gross. (Still, "Sweaty Baker" sounds better than "Barefoot Contessa".)


I can't believe I didn't get any other "prep" photos. When you think back on this post - and you will - I hope your brain fills it the gaps. Like Spielberg said, "It's because you don't see the batter, that it becomes more terrifying."

I learned from watching other bloggers bake that it's not the "missionary recipe" (the straight-up, boring one they give you) that is fun, but the holiday-themed special suggestions. For this box of bake-stuff, that suggestion was: 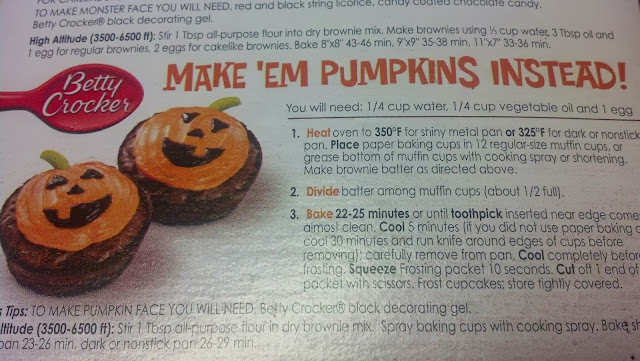 Pumpkins? PSSS! I have something better in mind! 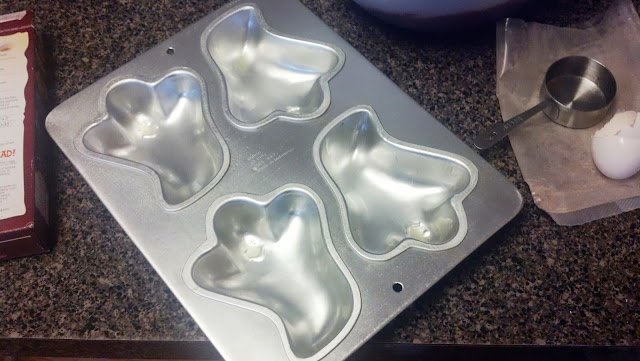 My beautiful wife and I found this ... somewhere. I don't remember. But we alwayus make brownies in it. NORMALLY, they are No Pudge Brownies because, WEIGHT CONSCIOUS, BOY-EEE! But today they would get the full-fat treatment. 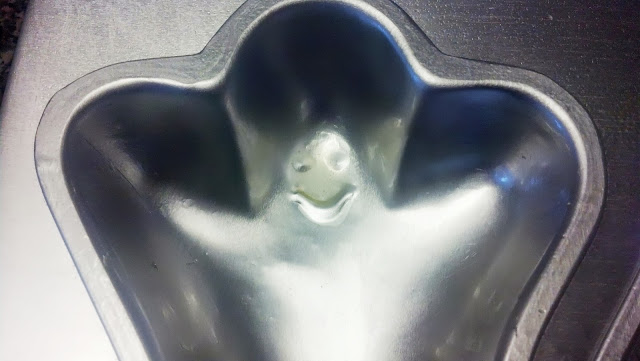 Look, they even have little faces that will NEVER show up on a finished baked good, but that I'm glad is there, so I don't think these are the "tormented" kinds of ghosts. These guys are happy being dead! 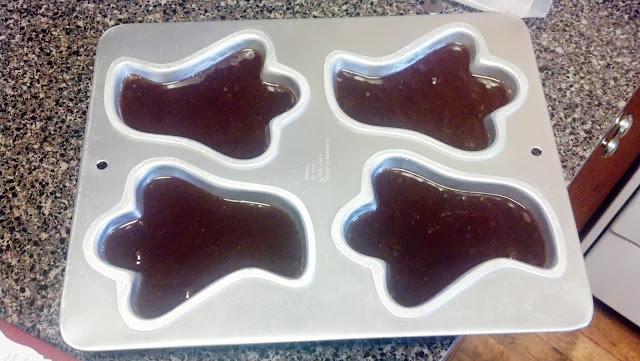 Don't know if this was by design of the Wilton people (they who made ghost pan), but a mix of Box Brownie fits perfectly in there, leaving scant batter behind.

Then I hit a snag: 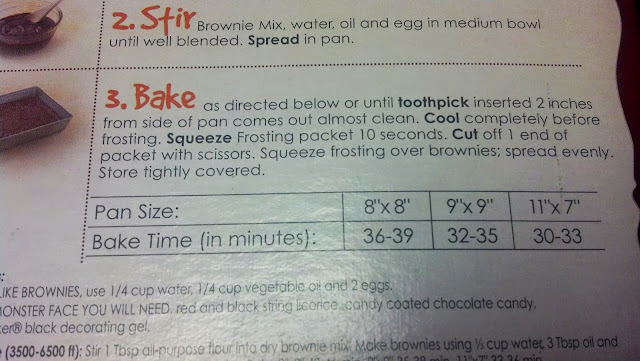 No "Ghost Shaped Pan" times! What kind of half-assing is your R&D department doing over there, Betty?! Don't they know what I, the consumer, need? Fire someone.

Anyway. 30 minutes later I started my usual "are they done? I don't know! Toothpick isn't EXACTLY clean. Better put them in for a little longer. God I hope they don't burn!" dance. Yes, I do this every time I bake. I might be a SNOB baker, but I am not a confident one.

They came out alright: 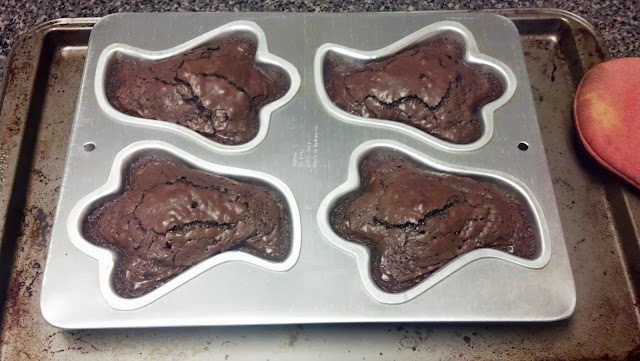 Getting them out of the pans took a lot of time and an orange peeler. (The chisel-end of the stick works really well to get between the brownies and the pan and it also slides down and curves around the mold without scratching it. If you got nothing else from this blog post, at least you've got that!

Time to slather them with appealing "orange frosting" from a silver packet. Decorating montage! 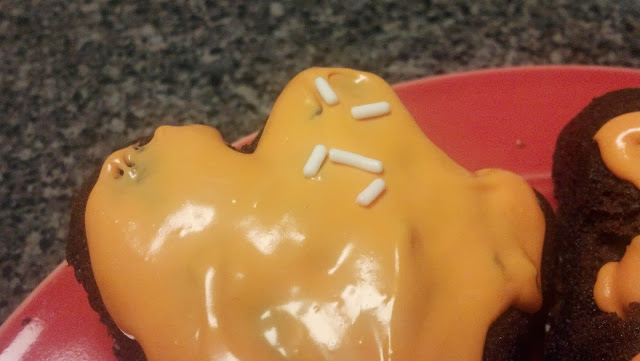 I was aiming for "mean", but he came off looking more "chubby cheeks" to me. Am I projecting? 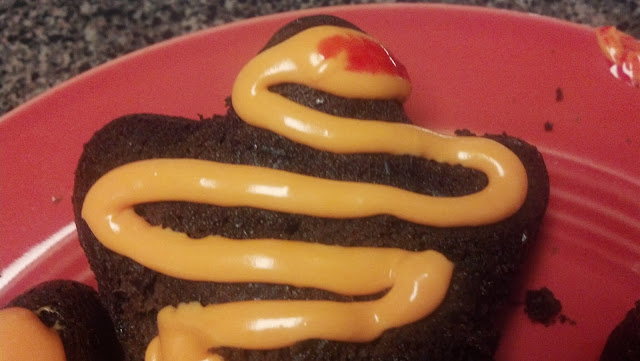 Was I going for? A snake cross-bred with Cyclops from the X-Men? A red-eye robot mummy? I'll never know. What I do know is is that that red decorating pen was also many years old and came out very liquidy. 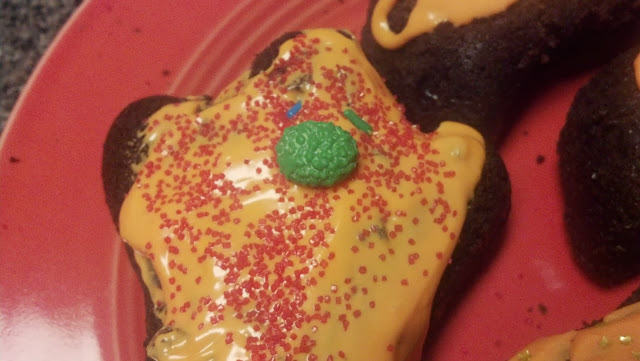 This is one of my beautiful wife's contributions. His nose is a Giant Chewy Nerd. Since she knows I don't like those, I think this was her way of ensure I wouldn't sneak-eat this specific ghost while she was at work. She's clever and beautiful! 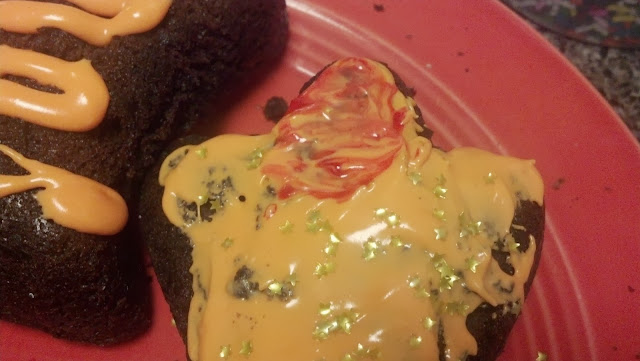 Another one of my wife's, it originally had a face. It was made with that runny red decorating pen, so she scraped it off. Result: Horrible bloody ghost face. Happy accident for all! 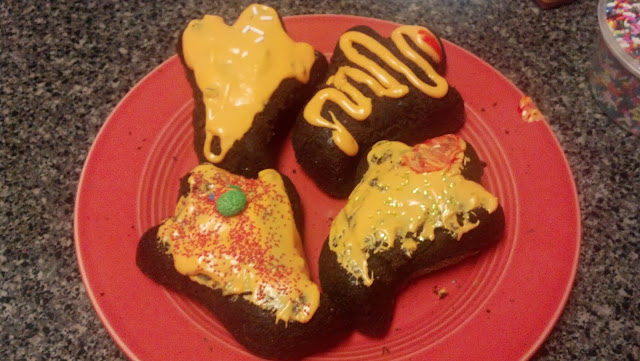 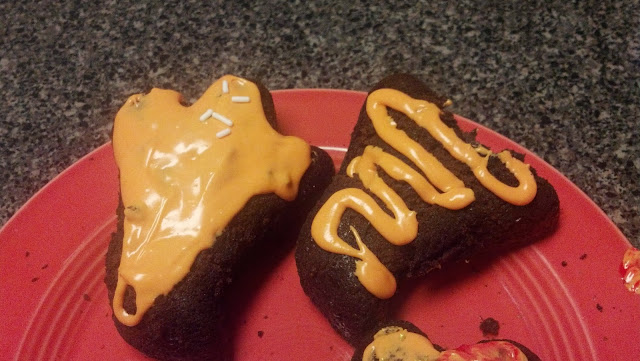 Something about the more-than-a-year-old frosting didn't smell or taste quite right, sooooooo: 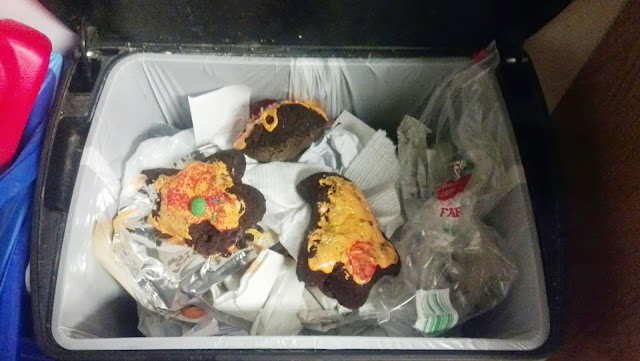 Do I feel bad about throwing out the entire batch? Nope! They were 49 cents. Plus, I was pretty sure I was about to have to get my stomach pumped and wanted to take prevenge. My beautiful wife suggests that this from-a-pouch frosting (which we usually never eat), always smells and tastes like that, but we're just not used to it. (FROSTING SNOBS!) She made a good point, but I still threw that crap out and will not look back.

Thus, a really long post comes to an end and we have learned that I cannot eat expired food. Oh, and that tip about the orange peeler. Take that knowledge with you, new graduate, as you go into the real world.