Vending machines in grocery stores can yield the most amazing things. I use "amazing" very loosely. 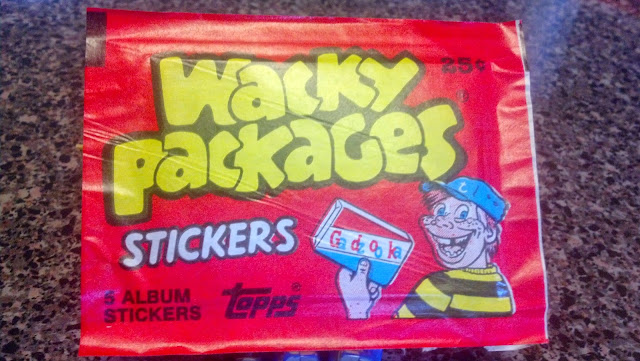 Though not the first series of these card/stickers, these were the ones I remembered from my childhood. Even though everyone knows this, in a post about Wacky Packages, one must mention that the original series was co-created in 1967 by future award-winning author Art Spiegelman - he of "Maus" fame.


The thing I was most looking forward to, when I picked these up, was opening the package. When I was a kid, opening the package just right used to be a big deal, for me. I was an obsessive/compulsive little child and getting the two halves of the packaging to separate perfectly, without tearing, was a major accomplishment that would mean my life was a-ok and that I probably wouldn't die that night in my sleep. Now that I'm a grown up, I no longer have such restrictions on worrying about dying in my sleep.

See, unlike modern trading cards, Wacky Packages (at least from the 80s) came in packaging that was essentially two pieces of printed wax paper, glued together all around the edges. It's the trading-card equivalent of the kind of sandwiches you get out of one of those plug-in sandwich makers. I guess?

So, anyway, I was a bit disappointed that, after removing the package from the glassine slip-cover it came in (to protect this "vintage" item in the rough-and-tumble vending machine, I suppose), I saw that one side had completely popped open:


At first I thought that this was because the glue was old and just gave out. Then I thought that I'd been scammed, and these packages had been opened, mined for "valuable" cards, then re-stuffed with dreck. But now I don't know what to believe. I do believe, however, that I paid a whole dollar for this pack, in an attempt to chase some nostalgia. AND I believe that I used a $5 bill to pay for it. AND I believe that the vending machine gave me my change in quarters. Quarters that I still have stacked on my desk, unused, lest I decide to take a picture of them for this post, as an illustrative gag. I won't be doing that.

Here are the cards I got. Maybe they'll take you down memory lane? 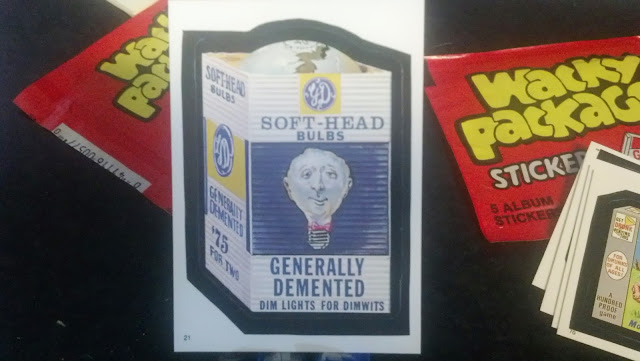 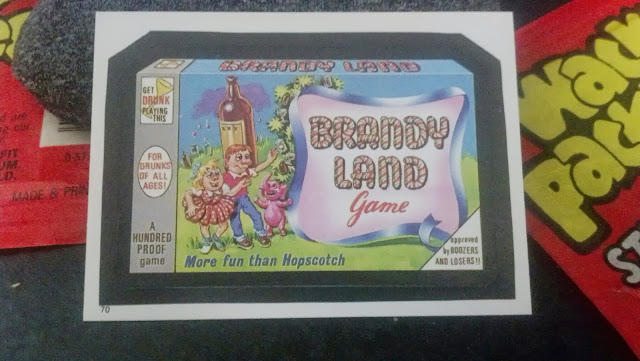 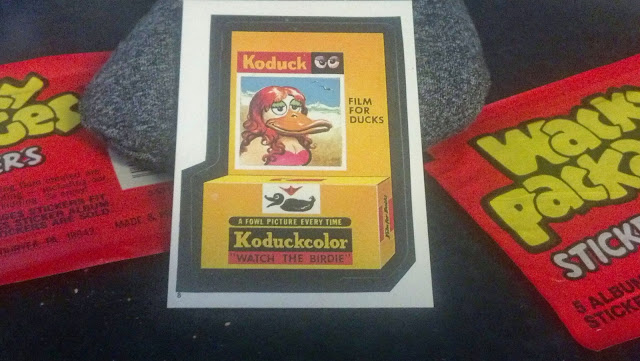 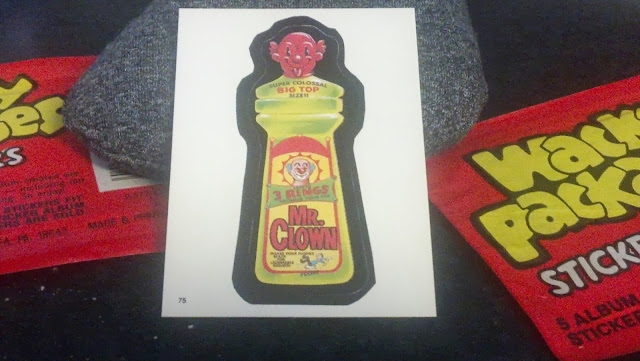 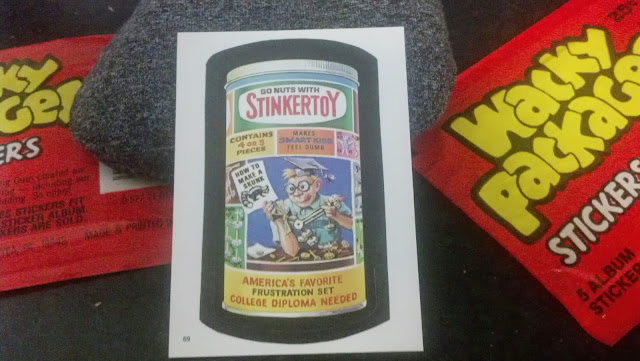 Anything? Did you get any sense of nostalgia from that? I didn't. Maybe it was because my experience started off wrong: With paranoia about being ripped off by "Big Vending".

PLUS, (probably because they'd been opened) the original smell of the cards didn't stick around. A freshly-opened pack of Wacky Packages stickers is a fragrant bouquet of ink, paper, and probably carcinogens. And I was cheated out of it. No matter how hard I sniffed, it just didn't smell right. Like when a chick is touched by a human and the momma-bird rejects it, so too have I rejected these cards, because they don't have the right smell. (And even though I heard that that whole chick/touch/smell thing is not true, I'm sticking with the analogy. I have set the scientific method back by decades, just by saying that.)

Should I have watermarked these photos, to prevent another blog from stealing my images? Nah. My phone takes such crappy pictures, who would want to steal these?

Here is the back of one of the stickers: 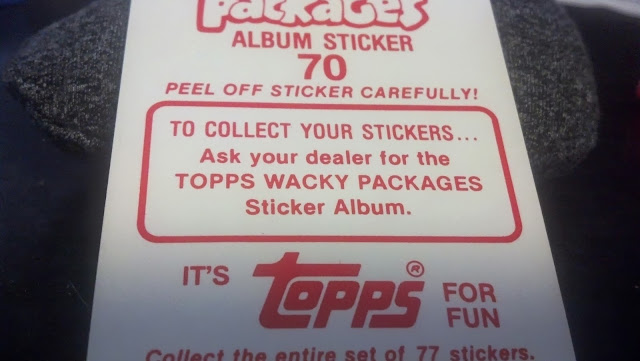 See, these were not meant to be collected as cards. You would buy an album from "your dealer" and that book would have spaces for each of the stickers. It was made of very unforgiving paper, if I remember correctly. Paper that, when you misplaced the sticker and thought you could peel it back up for a re-do, would simply shred. Attempting to make things better made things worse. A bad lesson. But what could you do? You had to try because if you ever put the sticker in wrong, the chance of someone you love dying in their sleep would go up by at least 5%.

Also, them referring to the cigarette-smelling guy at the newspaper stand as "your dealer" was certainly accurate, at least for me. I remember that, for at least a whole summer (I'm guessing the summer of 1986?) spending every single quarter I found on these things. Addicted. Hooked. I wonder what happened to my old album. Is that like an ex-heroin addict wondering where his old needle got to?

Did little 9-year-old me ever lay eyes on any of the above stickers? Were any of these his favorite? Time has erased the answer. None of these Wacky Packages look familiar to me. The only one I can vaguely remember is some kind of toothpaste that had millipedes coming out of the tube, or something. It was gross. None of the above were that card, so I was kind of let down. Not sure what I expected.

So I guess we're both disappointed in this post, huh?

I guess I could stick them onto things, but I'm not sure what I'd put them on that I wouldn't immediately regret. Maybe on my work laptop.

Oh, right. I promised, in the title, that is would be about Wacky Packages old AND new. Rather than creating a new title, here's some more article:

In the same vending machine that I found the 1986 stickers, I also found newer-old packs of Wacky Packages from 2010. Here are those images. 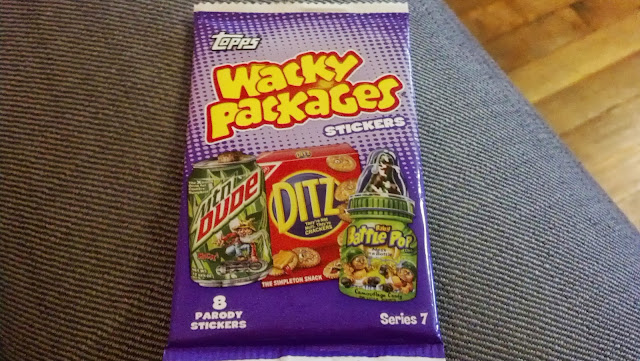 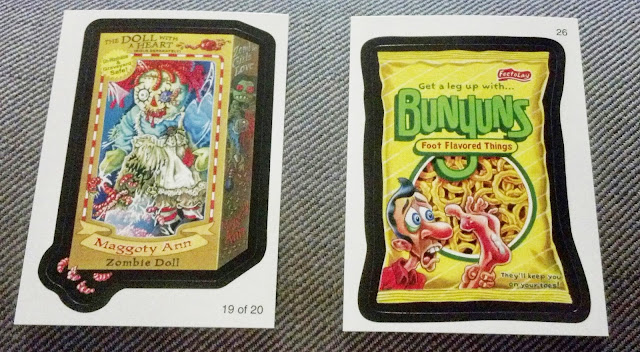 These give me no sense of nostalgia at all. But that's probably since these were from 2010. There's not much time to build up nostalgia in three years. I was already an adult. "Wow, these 2010 Wacky Packages remind me of when I was less vested in my 401K! CRAZY!"