As I've mentioned, my beautiful wife volunteers at the New York Public Library (NYPL). She says that 90% of her day is telling people where the bathrooms are. Amongst the other 10% of her duties is pointing out where a super-rare baseball card is. (It's in the third floor rotunda, so stop asking her, ok?!)

The other day, I ventured into the city to meet her, get lunch, and then see the other special exhibit the NYPL had going on about children's books. It was about 150 degrees, if you factor in the heat-index, so I should have won some kind of award for Best Husband Ever, but I didn't. I did get to see a really rare, stupid-expensive baseball card: 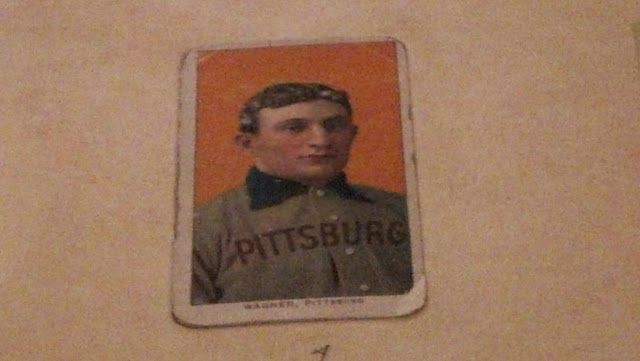 That's a Honus Wagner cigarette card. (These cards used to be inside packs of smokes - one card per pack. Then history happened, and now we get 12 cards, one stale piece of gum, and no cigarettes at all. I guess you call that "progress"?)


But why so expensive? Let's let wikipedia explain:


The T206 Honus Wagner baseball card is one of the rarest and most expensive baseball cards in the world, as only 57 copies are known to exist. The card was designed and issued by the American Tobacco Company (ATC) from 1909 to 1911 as part of its T206 series. Wagner refused to allow production of his baseball card to continue. The ATC ended production of the Wagner card and a total of only 57 to 200 cards were ever distributed to the public.

According to the plaque (that I did not think of taking a picture of) Honus' refusal stemmed from the fact that he didn't want kids to have to buy tobacco in order to get his card, so he removed himself from distribution. Or, at least, that's what his grand daughter said, when asked. Is this another case of historic, hero whitewashing?! Did Honus really just want more royalty money for his card? Was he, in fact, an alien? These are all valid viewpoints.

And here is Honus Wagner, un-cigarette-carded:


Not much more to say, really ... My beautiful wife and I then went and got salad-sandwiches at Chop't. And even though they couldn't tell me the difference between Caesar and Mexican Caesar, I still opted for Mexican Caesar, because I live on the edge.

OH!
And in case you were wondering, the special show about children's books was interesting ... and I don't even like children, nor children's books! Though that might just be because we took a tour of it. (Available daily; request Keith!)