Bowling played a large part in my childhood. I remember many a weeknight being dragged out of the house right after supper, to drive all the way across the entire island, so my mom could bowl with her league. I'd hang out with the bad kids, playing Spy Hunter, and wondering why my mom wasn't as afraid of me talking to strangers as I was.

In later years, worried about my fatness, I was instructed to joining a sport. My folks allowed me to choose bowling. However, the fries I would order, every time, negated any small glimmering of exercise that bowling could claim to have.

None of that has any bearing on what we're about to look at: Strolling Bowling! 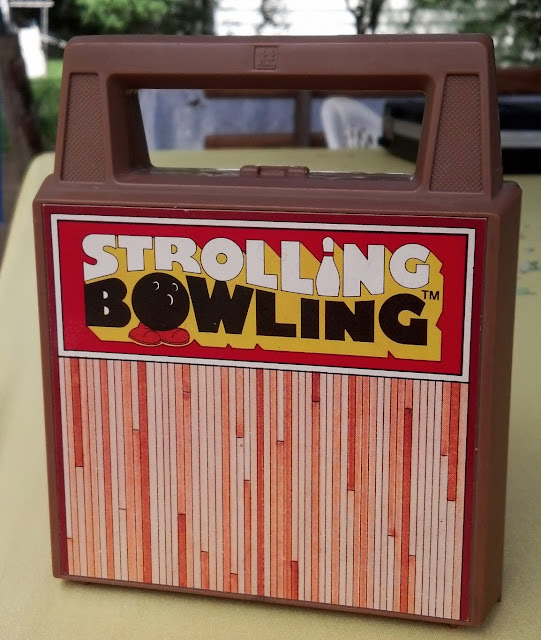 Here's how it works: The whole thing comes packed in a little suitcase, which could also double as a make-believe briefcase, so kids can pretend they're going to work. Did I ever pretend to work? I'm not sure. I do know that for most of my childhood, I was terrified of growing up. Growing up meant eventually dying. Lighthearted toy article gets dark!

Crack open that case - which is easier said than done! Even after 34 years, the latch is amazingly stiff and even with my manly, muscled-out adult hands, I was struggling with it - and inside you'll find another, special section of bowling lane (the pins) and a little wind-up bowling ball. 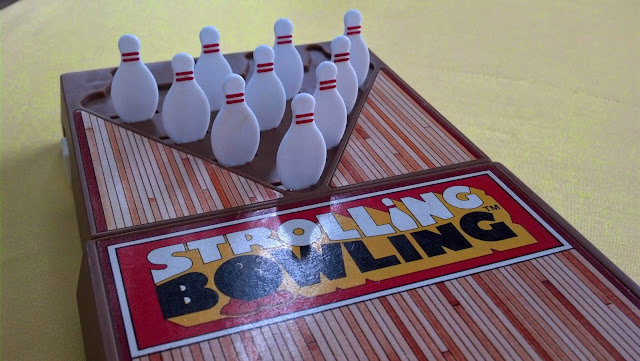 Attach the section you find inside onto the handle of the case and you've just finished construction of your bowling alley. You may now take a 20 minute break, if you're in the toy construction union.


Wind-up toys were a big deal, when I was kid. I hope they still are. I see some, from time to time, in places where children are apt to spend disposable income (CVS, road-side attractions, museum gift shops, gambling halls) but I wonder if they're still cool. Or maybe that was just me? Only me. Was I just assuming that all of my friends loved and collected things that made a high-pitched grindy noise and stuntedly hopped around, because that's what I liked? They were all probably into girls or something, instead.

Anyway, from my twisted perspective, the wind-up that came with Strolling Bowling was one of the best. (THE BEST was, of course, a back-flipping boxing kangaroo ... even if his gloves were not put on correctly. Story for another time!) I loved this thing. 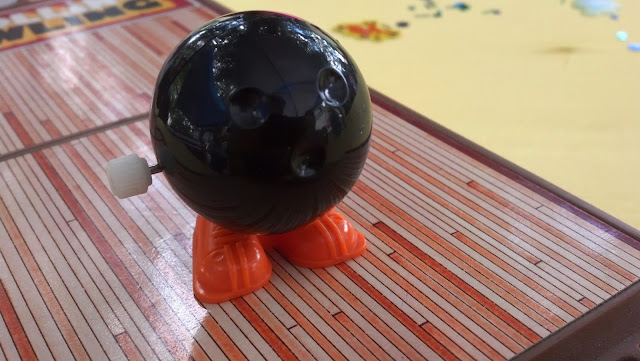 Look, he even has a little face, made from the finger holes! It's cute in a way that those words don't lead you to believe it will be. "Finger hole eyes"? Yikes

HOW TO PLAY: You wind that little guy up, then set him down at the non-pin end of the alley and hope he hops, straight-and-true, knocking down all the pins in his way. God, that sounds so obvious, like I'm explaining how to use a toothbrush or something. Other than me (because I needed some sentences to separate these two pictures) did anyone need that description? 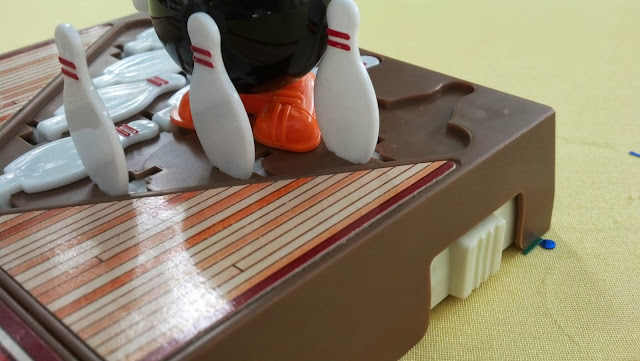 Once he (the hole-face allows me to personify the ball thusly) knocked over some pins, you reset them with that white slidey-switch, there. Of course, after a couple of "frames" of this, even the most boring of kids (me) would get bored and send the Stroller Bowler down the lane, keeping one finger poised on the reset. Once the hoppy-ball started knocking down the pins, I'd pull that switch as hard and fast as I could, sending the ball flying. Such fun!

Simpler times. These days, this would be all virtual.

I really wanted to capture that on video for you but, upon resurrecting this game/toy from my parents' basement (I had to walk through a lot of spiderwebs to get to this game. I hate spiders. I hope you appreciate the sacrifices I make to bring you pictures of my crappy old toys.) I found that the winding mechanism was busted. Somehow, over the past 20 years since I last touched this thing, it broke. Broke while sitting alone, untouched, in it's case. Some might say it died of a broken heart from loneliness.


So that he could have one last run, for old-time's sake, I awkwardly pretended that he was working and hopped him down the alley, manually, then knocked down some pins with him. There were other people watching me do this. It was embarrassing for everyone.

I thought it might seem sweet, but it was probably creepy; a weird man-child dragging a toy-corpse down a toy bowling alley.

Email ThisBlogThis!Share to TwitterShare to FacebookShare to Pinterest
Labels: board games, bowling, strolling