Marino's To The Rescue!

Here in NYC, summer dropped on us like a ton of bricks. Wet, humid, sticky bricks. Being intolerant of the heat, I immediately seek solace in summertime treats. (I also seek solace in them in the winter, fall, and any time I feel particularly sad. Eat your feelings!) And that is why I found myself venturing through the humidity to rummage through the freezer case at my local deli.

No easy task, this, because a) they pile all sorts of other foods on top of them, making me have to shift boxes to see into the cases and b) because the cases are all right in front of the checkout counter, so the person working there gets to watch me scrounge around, shift boxes, hem, haw, and get very uncomfortable under their scrutiny.

Since I'm in the way of ALL the other customers (who are buying more than a $1.50 ice pop), I always feel like I have to just quickly grab something and go as fast as I can. During this latest round of speed-icecream, I happened to spot the very distinctive FrozFruit label. Snatching it up with a breathy, "ooh! Childhood!", I paid and ran.

Though I'm not 100% sure, as there is not an entry on wikipedia, I believe that FrozFruit used to be made by the FrozFruit Company. (Remember when companies used to make their own products and everything wasn't just a sub-brand of the Coca Cola Company? Also: Get off my lawn, you dang kids, your pants are too loud!) FrozFruit was most notable - at least in my childhood - as being the most healthy choice in the frozen case (which is why my mom allowed us to have them). They were mostly fruit juice and huge chunks of fruit, frozen into a pop form. As a kid, I wasn't reading ingredients, but I knew that I could probably whine my way into one of these, after a long day of being dragged on errands by my mom. 100 button stores were worth at least one lime FrozFruit. (Conversion rates not adjusted for inflation.)

Back to the present: Clutching my frozen bar of nostalgia, I headed back home. That's when I realized that this FrozFruit was branded with the Blue Bunny logo. (Isn't that the movie with Chloë Sevigny and that dirtbag?) I was disappointed. I wanted something in this wretched world to stand on it's own and not be just another cog in the corporate machine.

Then I realized it was an ice pop and got over it.

The taste? It was ... disappointing. Not in the "you can never go back" kind of way; this was just so different from what they used to be. The original FrozFruit bars were rock hard and tasted like, well, frozen fruit. They got so cold that your lips and tongue would adhere to them and, despite past experience, you'd pull the bar off, causing several layers of skin to stay behind. Such fun!

This Blue Bunny version was very soft; almost sherbet-y. Sure Bert E. A bite taken out of it would smoosh the product, not clip it off cleanly. I want my frozen fruit to cleave like a glacier breaking off into my mouth. I am global warming!

I took a look at the ingredients list, as if I would somehow be able to remember the ingredients in the things from 30 years ago and pinpoint the differences. What I DID notice, however, was that either Blue Bunny took over the name and decided that it would be cheaper to replace the more "natural" ingredients with High Fructose Corn Syrup ... OR, in the 80s, we didn't know that HFCS was the devil. (And if you don't believe in all the terrible things it can do, you can at least agree with me that it's no better for you than sugar, right?) And, well, FrozFruit now has both sugar and HFCS. Certainly not the "healthy" treat my mom thought it was.

Is this where our tale ends? With bitter tears (I didn't really cry) of disappointment over an ice pop? Nope!

I went back another day, in the mood for another summertime treat (so many feelings to bury under empty calories!), and inside that very same case, in front of the very same deli employees who eyeball my choices, was another kind of Frozen Fruit Bar. These were made by Marino's! I hope you are as excited as I am, after those last two sentences; otherwise, I've failed to "grab" my audience. Should I put an explosion here, just to keep things interesting?

For those who don't know Marino's, they're the guys who make those cups that you could buy from the Ice Cream Man - the kind that come with a flat little wooden spoon. Were those everywhere, or just in NYC? I see Marinos is native to Queens, so there's a good chance no one reading this has a clue what I'm talking about. I hope my personality and witty commentary is enough to carry you along, despite having no common ground. 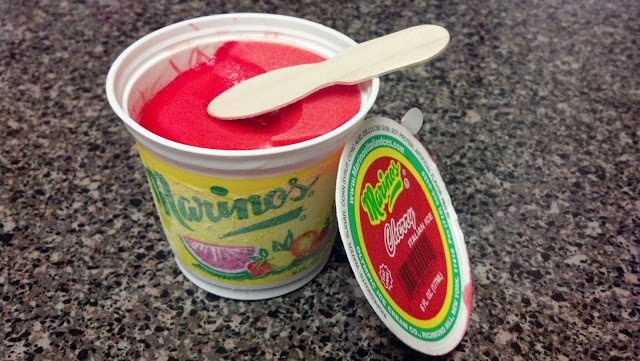 Not just because of the flat wooden spoon that would stick to your tongue as you were trying to eat the ice (at least until you could build up a good slick layer of saliva on it - gross). Not JUST because you could rotate the wooden spoon, like a drill, into the center of the rock-hard ice, slowly burrowing a hole directly to the bottom of the cup. But ALSO because once you got to the bottom, you were rewarded with these weird, semi-frozen, super-sweet shards of ice that comprised the entire bottom 1/4" of the cup.

The fascination / devotion to this slurry is such "a thing" that the Marino's official FAQ page addresses it:

I hope they never make an "all sugary formation" cup. That would be too much. Learn from Lucas' mistakes: Keep Boba Fett scarce and people will continue to love him.

But back to the Marino's Frozen Fruit Bar: Not only is it trying to rip off the FrozFruit logo, just a bit,

but it also replicated the original's texture perfectly. It was rock hard, just the way I remembered them being. My lips stuck to it, just like I remembered them sticking. And I was left with a slight feeling of emptiness after I'd finished eating it because I likes ice pops more than people, just like the emptiness I remember feeling as a child!

If I couldn't have my childhood FrozFruit back, then at least I can have Marino's Frozen Fruit Bar. Part of me is also glad the Blue Bunny version is so different because after making the mental association between Blue Bunny and Brown Bunny, I can no longer stomach buying their products. That's my own fault, for making that joke though. I'll own that.

So, what's the point?

When they destroy something you love, sometimes there is a replacement to be found ... often in the same ice chest as the thing that ruined your childhood memories! (This proverb applies to very narrow situations.)

Secondary lesson: Not all quests are epic.