Half Man, Half Tea!

Summer is only half over, but if I had to choose one drink that I will look back on as "The Drink Of The Summer Of 2013", so far, I'd have to say it's the Arnold Palmer. A drink that my father still doesn't believe exists, it's simply half unsweetened ice tea and half lemonade. It took a genius at golf to come up with that. I've made one almost every night this season. I always construct it over ice and I often construct it on top of a layer of vodka. SUMMERTIIIIIME!

So, I've been buying up a lot of lemonade, recently. Then I remembered I saw this, awhile back at the supermarket: 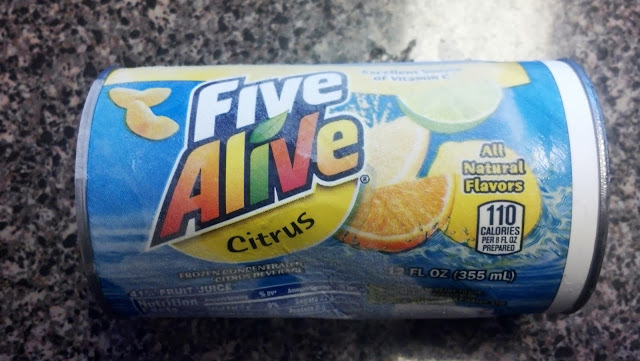 I hatched a brilliant plan! (There are different degrees of "brilliant", right? Like, My famous Uncle is a brilliant doctor known 'round the world in scientific biochemistry circles ... and I'M brilliant at drinking frozen-can beverages. Yes?) The plan was this: When my next tankard of lemonade runs dry, I'll re-fill it with re-hydrated freezer Five Alive!

Well, that day has come and you get to read all about it. So there I was, trying to mix a drink from frozen drink mix in a bottle with WAY too small an opening to make this easy. 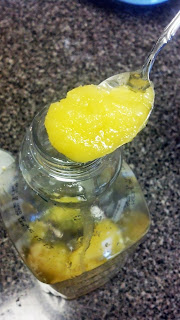 Yes, I had to spoon the entire thing in by hand. With each spoonful that slid off my spoon and plopped into the bottom of the container, I repeated, "This is so going to be worth this." I had to repeat that, or I'd have gone mad. Or maybe I had gone mad, already? Who does this?!

I just now realize that there is no reason for the Five Alive to have remained frozen, needing spoon-handling! It's not like it's a daiquiri, or something, that needs to remain frozen. I could have let all the mix melt in the can, then just poured it into the bottle. Ugh! Hindsight is twenty/five/alive. 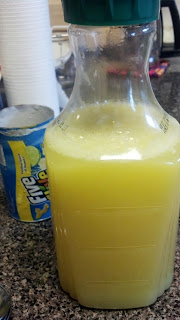 It looks very much like Sunny-D; however, unlike S-D, this smells great. It has a wonderfully strong scent of citrus ... though not in a "power of lemons" industrial-cleaning products type way. I guess, if I had to pin it down, it's a mostly orange citrus smell. I would like my car to smell like this all the time. (If only because that would mean that I have a car. Will you buy me a car?)

The taste is ... pretty middle-of-the-road and not at all strong, actually. I expected a puckering, sour taste, but this is mellow. Too mellow. I remember it having more "bite" when I was a kid; being more astringent. Maybe as I got older my taste buds have died? I don't blame them, I torture them with experiments like this all the time. Just giving up and dying might be a welcome respite from such constant taste-tests.

The aftertaste is bitter ... kinda like the taste of the pith - or "white stuff" - inside an orange. In fact, that bitter pith-taste sticks to your teeth, too. After a couple of sips, running my tongue over my teeth was an unpleasant sensation. Normally it's just an unpleasant sensation to watch others do. Like on the subway. Often accompanied by that obnoxious "thhk!" noise that drives me up a wall. If you all promise to stop tooth-sucking in public, I'll promise not to snap and murder you, one day. Deal?

As for the mouthfeel ... mouthfeel? My god ... who have I become?! Ugh.
As I was saying, THE MOUTHFEEL is ... smooth. Like grapefruit juice is smooth. Am I making any sense? Just know that it's weird.

But we're not here for a common Five Alive taste test! I want to get to the meat of the matter. Find out if I can claim to have invented my own version of the Arnold Palmer... the Arnold Jeffmer ...?

Here is what mixing the two together get you: 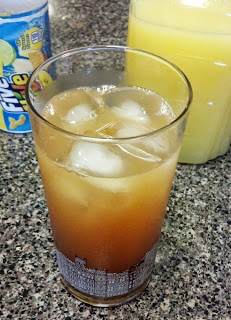 That certainly looks more like milky tea than a half-tea half-citrus drink, to me., but I'll let you draw your own empirical conclusions.  The taste? Well, the Five Alive doesn't really shine through / punch through like lemonade does, when you give it the same half-and-half treatment. Was I expecting something that is, by its own admission, only 1/5 lemon to have the same impact as 100% lemon? I was. I realize now I was wrong to assume this.

It doesn't taste so bad, really. After you get over the initial re-adjustment of expectations, it's actually quite pleasant to drink. The aftertaste is still quite bitter (what? Adding unsweetened iced tea did nothing to alleviate the bitter flavor of the Five Alive?! I am shocked, sir! SHOCKED!) but you can easily get rid of that taste by drinking more. Just never stop drinking.

Am I going to ditch lemonade and opt for Five Alive for all my future summertime Arnolds? No. And that's a total shame, because I was looking forward drinking my secret cocktail all summer long. Even, maybe, inspiring envy in others to do the same, after they read my blog and see what a cool guy I am. Now, all we both have is the fact that it's "ok, but not as good as lemonade." Knowing that cost me a couple bucks at the supermarket, but it only cost you a couple minutes of reading time. I guess you win?

WRONG! We're on the same side. It's just you and me, reader, against the world! They'll never understand us and our thirst for knowledge ... and Five Alive!!!

Did I put vodka in this thing? I can't remember.