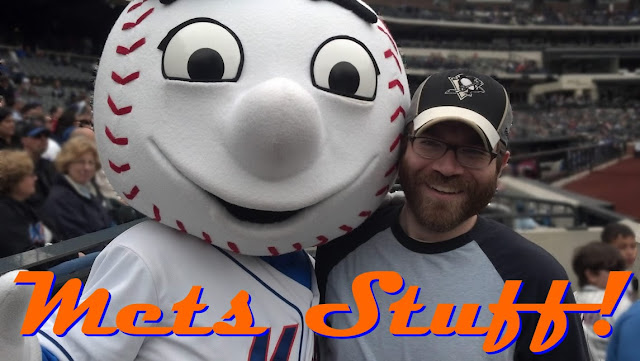 I'm not a huge baseball fan. (As you could probably tell, since I'm wearing a hockey team hat in the photo up there.) BUT, if someone put a gun to my head and made me choose ... then my life has taken a really unexpected turn for the worst and I have bigger problems than team loyalty. BUT, to answer the question, I would say, "The Mets!" and hope the gun-holder is not a [fill in rival team fan name here] (Braves? Did I win?).

My beautiful wife is a Mets fan. Oh, she doesn't face paint or anything, but, since her younger days of watching a coked up team win the world series, The Metropolitans have had a place in her heart. Her historical love and my "if I had to root for someone, it might as well be the Mets!" attitude means that we happily accepted when a friend of ours offered us the free tickets he received for donating blood.

I did not make that up.

Welp, after enjoying a brisket sandwich each and two bottles of water for $30, it was time to enjoy some sports! Out came the singer of the anthem. IMMEDIATELY upon completion of the song, the rain started. We stuck it out for a while, but we were soon driven out of our seats.

While we waited for the rain to stop, we figured we'd hit up the souvenir shops! As we were finding our way, my wife said, "Did you see that?!" I immediately looked up and flinched. Why? I will never know. "That kid had a had with Mr. Met on it!" This will be important, later in our story.

Turns out, sports teams sell some weird stuff. Like, for instance, this: 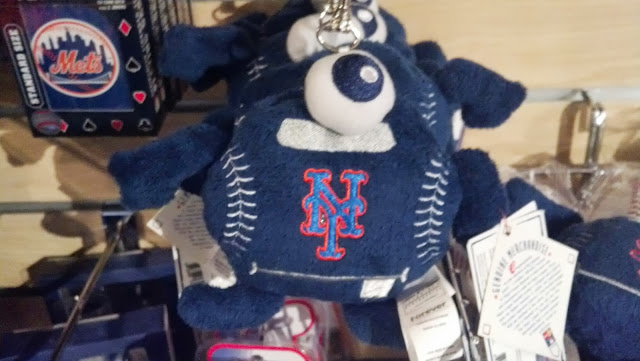 Hanging on a peg, next to a set of Mets playing cards was this keychain. (Ugh! Is this blog going to be only about keychains, now?!) It might be obvious to you, who are more familiar with baseball paraphernalia, but it took me a really long time to figure out this was a monster baseball of some kind. Originally, I thought those were zipper compartments. It was also not apparent to me that that was an eye. But I still don't understand why it has a white bar under it. And it wasn't until just now, that I noticed the straight-line mouth with oversize tooth... Which I guess makes the Mets logo his nose? Or a face tattoo?

Later, in another souvenir shop (there are many to shop in) I found a pair of companions for this keychain. One was a red baseball bat monster and another was a green baseball glove monster which looked more like a scallop shell. I did not take pictures of these. I did wonder who was the guy who bought all three and how he fits his keys in his pocket along with three small stuffed baseball dolls. He would have to have big pants.

In the second shop I also found this: 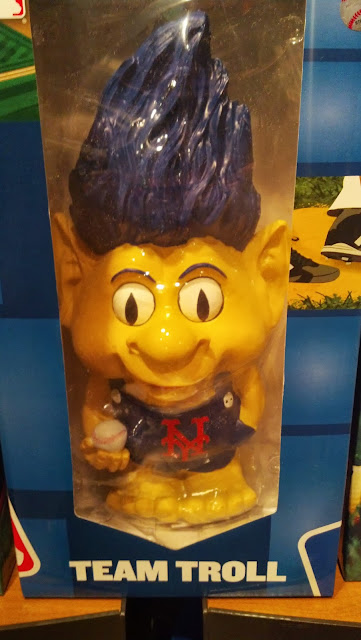 They are totally tapping into the hot "troll market" that's so popular with kids in grade school ... back when I was going to grade school. It eschews the fluffy, trademark troll-hair for plain, molded plastic. By doing so, they have removed the only level of interactivity that one could possibly have with a troll doll and left those eyes. those horrible, horrible eyes. I also don't like that his left hand is in his pocket. It's gross.

Heading to a third (and the biggest) souvenir shop, we finally found an assortment of baseball caps emblazoned with Mr. Met. Even though I had not seen the kid wearing it, I knew I was coveting it. See, I. LOVE. Mr. Met. It's irrational. I don't care. That header image of this post? One of the best moments of my life. I'm not ashamed. I KNOW it's a guy in a suit, so don't, like, pity me or anything. He's just my kind of Americana!

So, anyway, I tried on a LOT of hats. All the while realizing that the chance of me getting head crabs went up exponentially with each fitting. I'm still not convinced I don't have Super Lice from the experience.

Though, if I do have head-bugs, it was all worth it. Check out the dope cap I got: 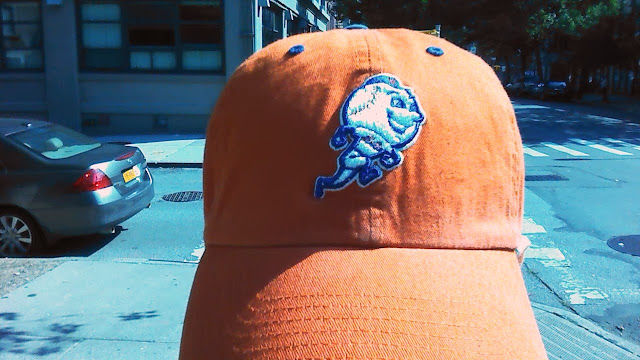 I CANNOT wait for a Yankees' fan to ask me, with that fake, smirking sympathy that I've seen them employ with real Mets devotees, "So ... *chortle* you a Mets fan?" So that I can respond, "Nope. I'm a MR. MET FAN!" Then make some kinda "boom" motion with my hands, as if I've just exploded their world and won a rap battle. It's gonna be "epic".

The ridicule will be ten times worse than if I were just simply a Mets fan, but it'll all be worth it because LOOK AT MY NEW HAT! It makes me want to sing "Brass Bonanza", even though that's not correct at all. I also love how it is unapologetically orange. It will also double as a safety device, on nights when the power is out.